“When I was five years old, my father started sexually abusing me,” laments 13-year-old Anna (name changed to protect identity) from the Philippines. With the treat to life dangling over her head, Anna was left with no choice but to oblige and abstain from raising her voice.

13-year-old Chenda (name changed to protect identity), from Cambodia, confronted violence, within the four walls of her home, at a very young age. Her father’s trusted friend had brutally beaten and raped her along with attempting to strangle her very life in the family’s wood home. Chenda, after the frightful incident, was never the same again.

Living behind closed doors had become her new reality. Scared of any human interaction, Chenda sobbed every time she relived the fatal attack.

Globally, six out of every ten children between the ages of two and 14 suffer from physical punishment on a regular basis, and an estimated 1.2 million children are trafficked annually.

The number of working children in Asia Pacific is- by far- the most numerous in the world. In South Asia and Pacific alone 77.7 million children are subject to child labour. Roughly one out of every five boys and girls has been sexually abused and up to four out of every 10 children report some form of emotional abuse, with girls in high-income countries in East Asia the most affected. In the Philippines alone, 17% of children experienced sexual abuse while growing up. About 37% of girls in Nepal marry before the age of 18.

“The SDGs provide World Vision and its partners a historic opportunity to tip the scale definitively against silence and, in too many places, outright acceptance of violence against children,” said Leen Decadt, World Vision’s Child Protection Advisor in East Asia. “There is empirical evidence that with enough mobilization, indignation and persistent advocacy, we can swing the pendulum against social injustice. This is our moment to collectively prevent acts of violence against children – to salvage scarred childhoods,” she concluded.

It Takes a World Campaign

To significantly enhance child well-being imperatives, World Vision launches its new global campaign today, Wednesday, 1 March – ‘It takes a world to end violence against children’. To contribute towards achieving the Sustainable Development Goal 16.2, our aim is to positively impact the lives of millions of the most vulnerable boys and girls by 2021.

Currently, World Vision has End Violence Against Children programmes in Cambodia, China, Laos-PRD, Mongolia, Myanmar, Thailand and Vietnam. The goal is to end child trafficking, abuse, neglect, exploitation, and all other forms of violence, within supportive families and communities. World Vision continues to leverage and build upon existing strategies and policies in partnership with governments, civil societies and the private sector. 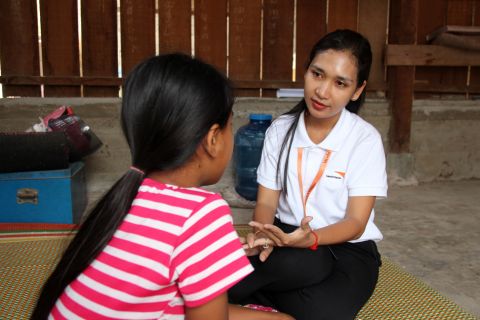 Thankfully, Anna and Chenda are now part of child forums, started by World Vision, in their respective communities which empower children with knowledge on child rights and child protection.

How you can help?