But with one-year-old Jalrotchen, there was no way to avoid it. Her mom needed to know. The girl was too small, too thin. Even though she played wide-eyed, when I wrapped the measuring tape around her arm, I knew what was going to read.

Jalrotchen was 14 months and only 5.3kgs, in desperate need of more nutritious food.

Her mother, Janice, told me their house was totally destroyed during Typhoon Haiyan. Her husband, a farmer, wasn’t earning enough income to supply the family with enough food.

While the donated food aid was sustaining Jalrotchen, even allowing her to play, it was not improving her health.

She needed vegetables and fruit, essential sources of vitamins and minerals to improve her health.

Sadly Jalrotchen was only the first child who we identified as malnourished, but she was not the last.

In my team, we’re five nurses and one midwife, meeting hundreds of parents with children below the age of five everyday. We’ve identified 23 children as malnourished in the villages where we’re working in Eastern Leyte, the area hardest hit by last year’s Typhoon Haiyan.

Often, the parents aren’t surprised. These malnourished children were underweight before, the disaster exasperating the child’s condition.

To me, it emphasizes points that have been written about before in many other spheres. Already in the Philippines, the World Health Organization states 20.2, or one in five children below the age of 5, are underweight. But when a natural disaster strikes, this number seems to grow.

Child nutrition is often cast aside when families have lost their homes and their means of earning an income. Instead, families focus on survival – but often at the peril of their child’s growth.

But malnutrition can be prevented.

Baby Jalrotchen is a great example of how this problem can be overcome.

After she was diagnosed, Janice took baby Jalrotchen to a medical clinic. There, the health team offered nutritious packs that provided Jalrotchen with a high energy, high calorie boost – providing the one-year-old with the nutrients she needs.

What’s more, Janice and Jalrotchen started attending World Vision session twice a week where we taught parents with young children how to maintain child health and nutrition in the aftermath of a disaster.

There, Janice learned how to prepare locally available food that’s high in energy and nutrition for children, to make sure they are growing healthily. She learned about hygiene and food handling – which helps prevent diseases from starting and spreading. She learned about how to identify and budget the most nutritious food available at the local market.

Last time I visited Jalrotchen, her weight had improved. When I measured her again, she no longer classified as severely malnourished.  It’s a success story that we hope can be repeated. 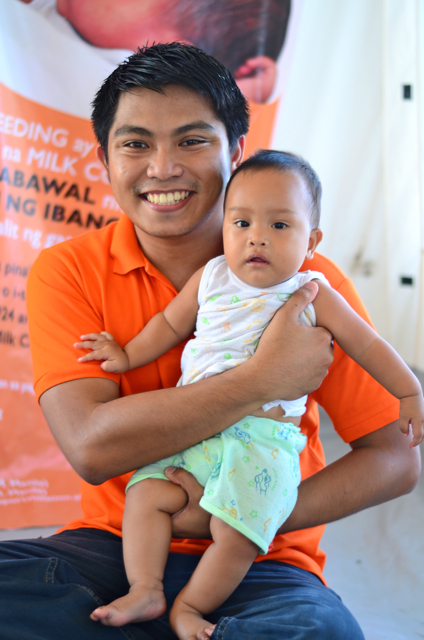 Feral Quitlong is a health and nutrition facilitator of World Vision Haiyan response. As he journeys with the women and moms at the Women and Young Children Space, he’s able to see their resiliency while coping with the aftermath of Haiyan. Photo by Crislyn Felisilda

Find out more about the Typhoon Haiyan response.