Around the world, the coronavirus (COVID-19) is taking lives, devastating families and disrupting life in previously unimaginable ways.

We are responding in every country we work in to limit the spread of the virus and reduce its impact on vulnerable children and their families.

Lebanon, is one of the 17 priority countries where we are increasing our efforts to protect especially vulneralble populations.

Learn more about our response

Bader and Fawaz: Disability will not stand in their way

Bader, 13, dreams of being a doctor one day. Fawaz, 12, wants to be a pilot when he grows up. Bader and Fawaz, who had once lost all hope, have dreams like ordinary children now.

Mhammad is off the streets and away from danger

The potential of any child is unmeasurable. Sadly, some children are forced to work in order to support their vulnerable families.

Holding on to hope when so much is lost is a skill, and 15-year-old Bayan is an expert in optimism.

Behind every refugee crisis are thousands of different and unique stories from people who experienced the worst hardships.

Violence, addiction, unemployment and a high crime rate; these are ingredients for social unrest in any city in the world.

For the love of education

"They are a generation being raised on abuse, and we are trying, as much as possible, to give them  hope of reducing the effects of violence,”

World Vision started operating in Lebanon in 1975 with the onset of the civil war. Today we continue to assist Lebanese families and refugee communities through development projects, emergency relief, and advocacy.

While more than a quarter of the Lebanese population lives below the poverty line, marginalisation and vulnerability are even more widespread. Children and youth are dropping out of school to join the labour force and contribute to their family income. Lack of job opportunities and choices make children in Lebanon more vulnerable to trafficking and exploitation.

The rapid urbanisation of Lebanon is also contributing to increased poverty. Poverty pockets characterised by high density of residents, over crowding, absence of proper physical infrastructure, and lack of access to basic goods and services are becoming more evident. Rural poverty is also prevalent, especially in the North, Bekaa and South of Lebanon, where people depend on agriculture for their livelihood. Palestinian refugees living in camps and informal settlements in Lebanon are among the most marginalised groups in the country.

Poverty in a middle-income country like Lebanon is often seen as an embarrassment. Lebanon is one of the few countries in the region that is not resource rich and is dependent on service industries like tourism and hospitality, and banking and financial services. All of which are easily disrupted by political tensions, uncertainty, violence and conflict.

We believe there is hope for a brighter future for the children of Lebanon. Through child-focused projects, we're working with communities and children to promote change and improve their well-being.

The Happiness of Learning

Students in the Early Childhood Education (ECE) programme, are interacting with their teachers and learning new lessons by singing and playing. They are learning numbers, the different geometrical shapes, colors and songs.

A profession for life

With support from the Kuwait Foundation for the Advancement of Sciences (KFAS), World Vision in Lebanon is improving the livelihood conditions of Syrian refugee youth.

World Vision Lebanon's response to COVID in Akkar and South

How the Coronavirus is affecting children and their communities in Lebanon

The new Coronavirus infectious disease (COVID-19) that started in late 2019 in China is now roaming the entire globe.
Read more

The emotional, social, and physical development of young children has a direct effect on their overall development and on the adult they will become.
Read more 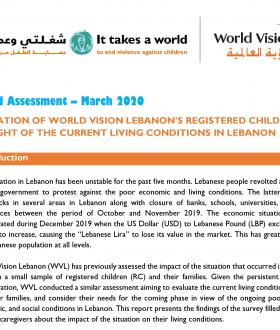 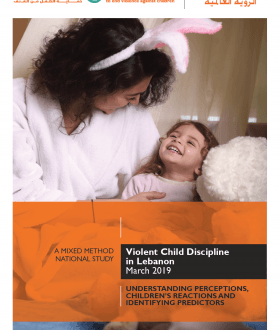 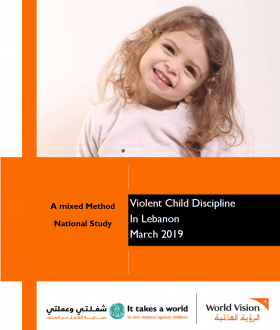 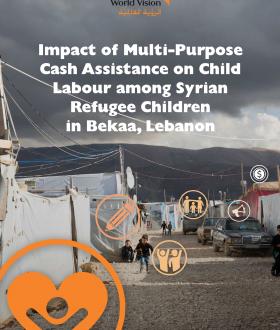