Hunger is a problem that has plagued humanity for millennia, and it continues to haunt us. One in three people worldwide suffer some form of malnutrition, according to the World Food Programme. Every six seconds, a child under five dies of hunger-related causes, and one in eight people in the developing world go to bed hungry each night.

Just because hunger has persisted doesn’t mean it has escaped God’s notice: “God always keeps his word. He gives justice to the poor and food to the hungry,” (Psalm 146:6-7, CEV). His expectations of His people haven’t changed, either. When God gave Moses the law for His people, one was to let some crops stay in the fields so the poor could glean them for their families (Leviticus 19:9-10).

World Vision has joined the Global Day of Prayer to End Famine, a broad coalition of more than 70 faith-based organisations representing more than 1 billion Christians worldwide, because we recognise the urgent need to make this crisis more widely known through our prayers and actions.

“For I was hungry and you gave me something to eat.”

Mornings in Somalia are a struggle for Saîd, who dreads the sight he will inevitably face when walking over to the fields behind his tent: lifeless goats scattered across the ground, infested with maggots and devoured as vultures’ prey.

Every week, dozens of farmers’ livestock lose the fight to thirst and hunger, and with it, Saîd’s desperation keeps growing. Somalia is on the brink of yet another famine, and Saîd is one of more than 6 million people at risk. For a country of approximately 11 million, many of them living a nomadic lifestyle, this is devastating.

Saîd knows that more than 260,000 people died during 2011’s famine, and he’s worried that Somalia is close to a similar catastrophe. “Right now, we need all the help we can get,” he says.

Before his wife and 14 children wake, he is already busy dragging the animals’ dead bodies onto a big fire. “A few months ago, I had over 200 goats, but I now struggle to keep the remaining 50 alive,” he says. “Things used to be different. Our hot and dusty roads used to turn into deep rivers of mud once a year when heavy clouds filled the sky and the rainy season approached. It was a time of celebration. But for the past two years, the rain hasn’t come.”

In the past months, thousands of nomads—including Saîd and his family—have been on the move to find what water is left, strapping their tents and empty buckets to the backs of camels and walking for hundreds of miles.

But Saîd and his family aren’t finding a better place.

“In previous years, we have planted and harvested crops, but with the failing rain, we decided to not waste our seeds. Last year, we lost all of our crops to the drought, but this year, we didn’t plant anything. Even if it were to rain, there would be no food for us,” Saîd says. “Right now our goats are weak and dying, and when all of them are gone, I fear that we will be next.”

Global drought, worsened by conflict and severe food shortages, is affecting as many as 70 million people throughout central, east, and southern Africa, the Middle East, and parts of Asia, says the Famine Early Warning Systems Network. Join us in prayer for people who are hungry around the world and those working to feed them.

Pray for the hungry.

What’s different now from perhaps any other time in history is that the problem of hunger can be solved. According to the United Nations Food and Agriculture Organisation, the world can produce enough to feed everyone on earth. Yet people remain hungry because they don’t have access to the food that exists.

Loving God, we ask for Your blessings on children, mothers, fathers, and communities who are thirsty. Purify, protect, and multiply their water sources. Strengthen their resolve so they may fully enjoy the benefits of clean water — essentials like education, gardens of fresh produce, and good health.

Pray for the millions of people struggling from famine and food shortages.

In Ethiopia, Kenya, South Sudan, and Somalia alone, tens of thousands of children could starve to death as famine, starvation, and food and water shortages affect 22 million people. World Vision is scaling up humanitarian assistance here to meet the health, nutrition, child protection, livelihoods, shelter, education, and water and sanitation needs of the most vulnerable. Ask God to begin healing these battered areas of the world.

Good Shepherd, we pray for cooperation and support for life-saving assistance to people struggling from food insecurity around the world. Send life-giving rains at just the right time, create good conditions for families to grow food for their survival, and cease conflict so Your children will no longer go to bed hungry and afraid each night.

Pray for children affected by acute and chronic malnutrition.

Worldwide, one in four children younger than 5 does not get the nutrition he or she needs. Hunger affects everything from intellectual development to physical growth and ability to fight off illness. Without proper nutrition, a child’s heart literally shrinks. In cases of acute hunger, the liver, kidneys, and intestines begin breaking down. Ask God to intervene.

Great Physician, we don’t have words to express how much this breaks our hearts. Have mercy on these children. Protect their little bodies and give them strength. Put Your healing hand on those with developmental issues, and allow them to grow up strong and healthy despite the hunger that afflicts them. 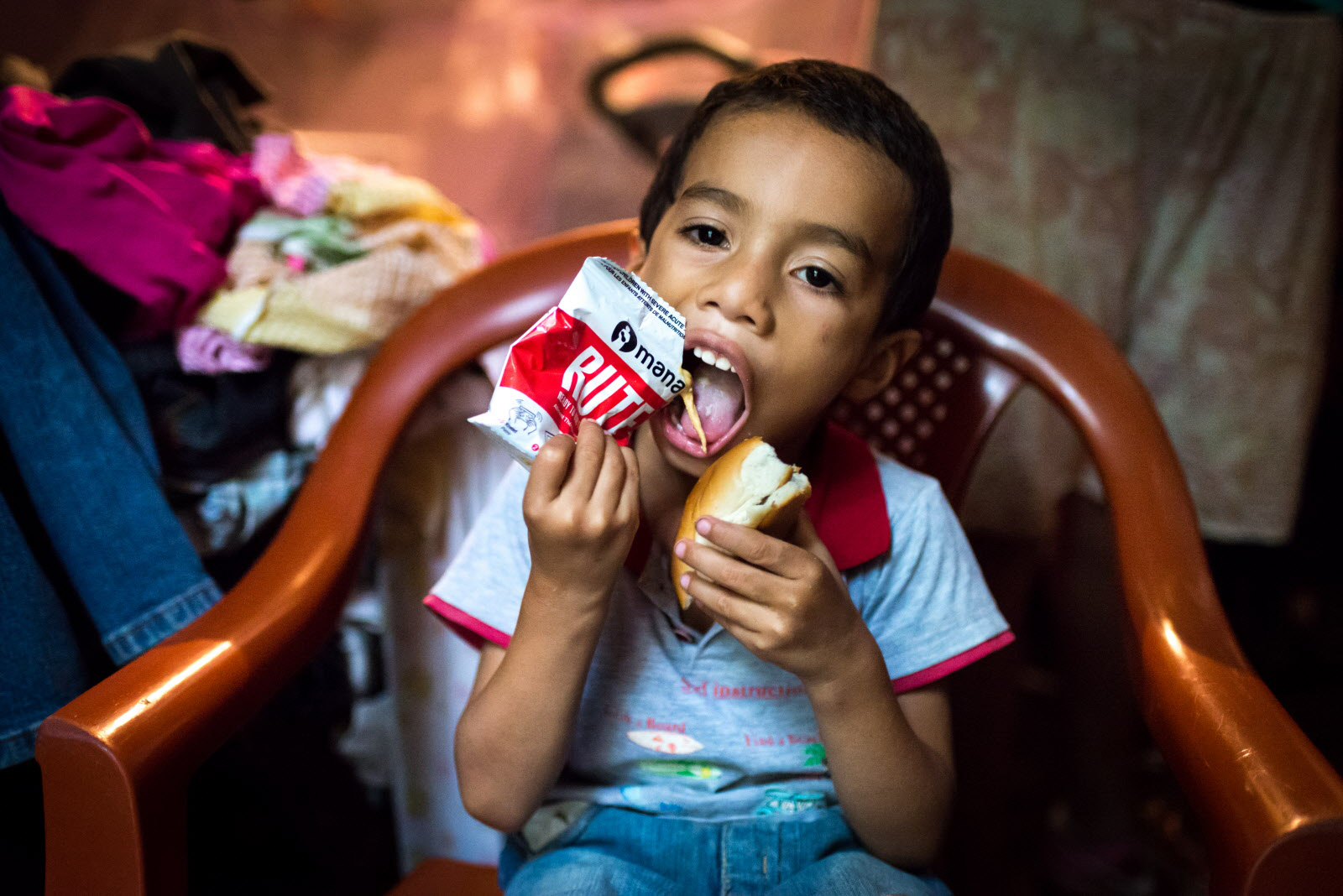 Sponsored child Anthony, 4, eats ready-to-use therapeutic food (RUTF) on bread and from the bag at his home in Cocibolca, Nicaragua. Often the picture of severe malnutrition is a child from Africa with a thin body or distended belly. However, in Central America the issue can go unnoticed. At his first World Vision Child Monitoring System evaluation, he weighed only 22 pounds. To help Anthony gain weight World Vision encouraged Ana to join a mother’s group, where she learned to cook new, nutrient-rich meals. Through World Vision’s health monitoring program, Ana was given a six-week treatment of RUTF for Anthony. After he had been eating the fortified peanut butter paste for three weeks his weight was on the upswing, extreme fatigue was a thing of the past, and hope was now part of his future. ©2015 World Vision/Eugene Lee

About 66 million children around the world—23 million in Africa alone—attend school hungry. This makes concentrating on class difficult, and their learning suffers.

Heavenly Father, be with little ones as they seek to learn. Provide their parents with the means to send them to school well fed so the only hunger they know is an insatiable hunger to learn. Equip them with an education that prepares them to do the great things You have planned for their lives.

Pray for World Vision’s work to feed the hungry.

World Vision, the largest distributor of World Food Program food aid, continues to be at the forefront of feeding millions of hungry families. We work with children, families and communities around the world to provide nutritional relief in the short-term and improved agricultural programming and training in the long-term.

Loving Provider, Isaiah 58:10 tells us that if we give ourselves on behalf of the hungry, then our light will shine in the dark. Thank You for those who are shining lights, and please call forth others to make a difference. Be a fortress against danger for World Vision’s staff who work in Your name to feed the hungry. Continue to use relief workers to bring not only much-needed food, but to also show Your love so people can be fed spiritually and physically.

“… and if you spend yourselves in behalf of the hungry and satisfy the needs of the oppressed, then your light will rise in the darkness, and your night will become like the noonday.” —Isaiah 58:10 (NIV) 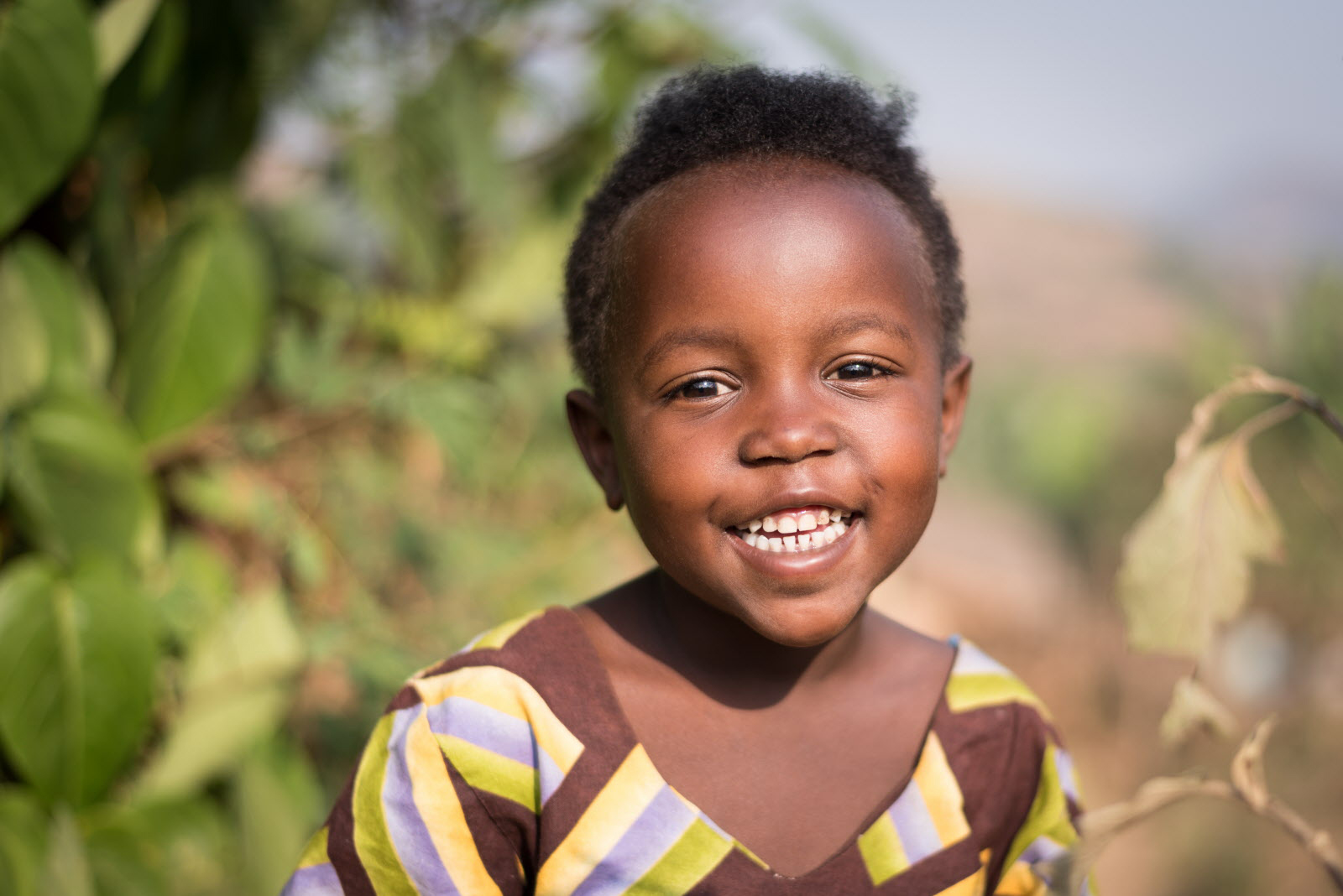 Claire, a 4-year-old girl, smiles as she walks through her neighbor’s garden in Nyaruguru, Rwanda. Claire is the child of a single mother in the neighborhood who struggled to provide food for her. She was severely malnourished, but not anymore thanks to the provision of Vedaste and Beata, her neighbors. Beata says, “I know what it means to be hungry. I know what it means to have a child when you don’t have food or drink to give to them. I feel compelled to help people, because God restored my life when I was almost dead. The second chance was given to me to live. I want to use it to help people.” ©2016 World Vision/Eugene Lee

Despite tragedies, progress is being made. The number of hungry people globally has fallen by 167 million in the last decade despite a surge in population growth, according to the Food and Agriculture Organisation.

Great Deliverer, we thank You for the precious lives that have been saved. May Your love guide our steps as we continue on the path to eradicating hunger.

Pray for people to discover the Bread of Life.

World Vision rejoices with the progress made toward eradicating hunger, but we “do not live by bread alone” (Matthew 4:4, NLT). Many people still live without faith and hope.

Thank You Lord for being our Bread of life — the One who satisfies our soul’s deepest desire with the joy of salvation. Open people’s eyes to recognise You as the only Bread of Life for their spiritual hunger.

“Then Jesus declared, ‘I am the bread of life. Whoever comes to me will never go hungry, and whoever believes in me will never be thirsty.’” —John 6:35 (NIV)

Join churches worldwide responding to this crisis through the Global Day of Prayer to End Famine, a broad coalition of more than 100 faith-based organisations representing 1 billion Christians.