Byron Noel is an example of tenacity after suffering Guillain Barre, as a consequence of Zika.

"Practically, I´ve come back to life and now I have more desire to live," were the first words of Byron Noel, 23, as he dressed in the uniform of Club Deportivo Real Sociedad of his community Las Cabezas Choluteca, about 150 kilometers from Tegucigalpa in the south region of Honduras.

"I'm trying to play soccer, 20 to 25 minutes to strengthen my bones," says Byron, who is recovering from Guillain Barre Syndrome, a devastating medical condition that usually appears unexpected.

The first symptoms of Byron, who is sponsored by World Vision, were visible on February 1, 2016. He felt weakness in arms and legs. With the help of World Vision, he was admitted at the South Hospital in Choluteca. On February 5, he was transfered to the emergency room at the University Hospital of Tegucigalpa. He was also suffering from paralysis in lower and upper muscles, paraplegia in the muscles of the face that prevented him from controlling the movement of the eyes or swallowing. His respiratory system was affected, so doctors connected Byron to a tube that helped him breathe.

A month later, he was discharged from the hospital and taken home in Choluteca, where recovery was not fast. Byron, father of Andrew, 1, was fed like a baby. 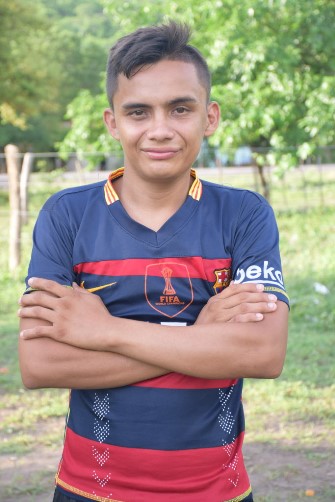 Byron with the uniform of Club Deportivo Real Sociedad of his community Las Cabezas Choluteca, about 150 kilometers from Tegucigalpa, South region of Honduras.

"I started walking in late March. My family and community assumed that I would remain in a vegetative state in bed or sitting in a wheelchair."

Today, Byron is able to walk, run, and ride a bike, however, the left side of his face is still paralyzed. His gaze is vague sometimes.

"I started walking in late March. My family and community assumed that I would remain in a vegetative state in bed or sitting in a wheelchair."

"Byron got off the bed while we were sleeping and crawled on the floor like a snake. He leaned on the chairs and stood up. He said he had to do it, that I should not worry about it," says Maria Rodriguez, 64, his grandmother. In the following days, Byron walked short distances while his body tottered. "You will get killed," said Maria, but he only smiled”.

"Byron had willpower and determination to stand up. He would have never wanted to stay crippled in bed. My grandson's recovery is a miracle of God," says Brígido Carranza, 66.

Byron is no longer working due to his illness. He lives with the help of his grandfather, Brigido Carranza, who works as a security guard and earns half of the minimum wage, which is 5,300 lempiras (230 USD) per month in Honduras.