“Farming has improved my family income and it enables me to pay the tuition of my 3 children… We plant 18 types of vegetables here and I work with my 6 siblings as a solidarity group” says Ms. Batsuren from Bulgan province.

Like other country offices, World Vision International Mongolia (WVIM) contributes to local development and equips community people with the necessary tools and skills they need to start or grow their businesses thus enabling them to provide for the family and children. 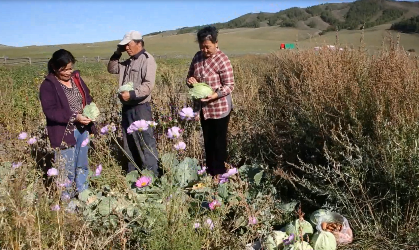 A total of 1018 solidarity groups were formed within the framework of the economic development program of WVIM in order to encourage vulnerable families to run their own business and to increase their family income.

According to the World Bank, 27.4% of the Mongolian population lives under the poverty line. WVIM is working to reach the poorest households and enabling them to provide the basic needs of the family and come out of this poverty line.  In 2014, 3505 people are engaged in saving groups, 9518 people have been involved in the graduation approach and 9059 people connected in solidarity groups within economic development program of WVIM.

Within this framework is a special project called, “Forest Protection and Enhanced Rural Livelihoods”, where 51,728 families received agricultural tools, seeds and seedlings and 1,300 families received tools, equipment and machinery such as a greenhouse, irrigation system, tractors, and beekeeping tools.

World Vision provided Ms. Batsuren a greenhouse in 2010 and enabled her to participate in farming experience exchange program in Selenge Province. Since then she worked hard and won the best farmer award of the Province. Together with her 6 sibling she planted artichoke, pepper, and tomatoes in the greenhouse. Last year they made artichoke extract and specialists produced medicine with their artichokes within the province. They often participate in World Vision’s Food Expo and trainings. She was very thankful to World Vision who helped her to become an experienced farmer and to be able to pay the tuition fee of her 3 children with the income she earned from the farming.

By the end of 2014, 248 saving groups with 3,505 people were formed and the members benefitting from taking low interest loans to start and/or broaden their business and to meet their families’ primary needs. 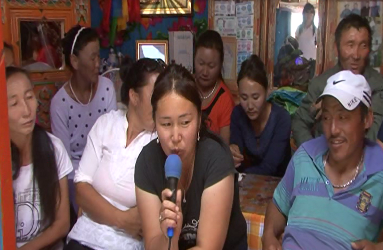 The above photos shows the saving group members sharing their success on local TV.

According to Child Wellbeing Target (CWBT) Report, the Saving Group project model was the main contributor to the achievement of the economic development sector. More than half (56%) of people who trained on this project model had been involved in saving groups. 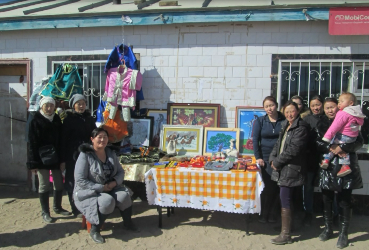 The photo shows members of the savings group exhibiting their products.

“I work as a secretary of the saving group. Being engaged in this group has created an opportunity for me to start my private business of barber and beauty salon"

These achievements of communities and WVIM contributions were well reflected in the CWBT Report of 2014.  All three indicators under the objective “Enhancing the resilience of families and communities to economic shocks” increased compared to the last year.

The proportion of households with year-round access to sufficient food for their family is 65.6% nationwide, an increase of 3.6% compared to the last year. Though when compared by location, urban households still face more challenges than rural households. This is due to high cost of living in urban areas.

The proportion of households where at least one adult is earning an income is 71.4% and it reflects a 7% increase compared to the previous year. However, the difference between urban and rural area is large, because of the availability of jobs is scarce in the countryside. Urban ADPs contributed much to the increase of this indicator.

The proportion of parents or caregivers with the means to save money has increased by 2% in FY14 compared to FY13. Interestingly, the rural average (53.1%) is higher than the urban average (40%). It is maybe because of lower cost of living in rural areas.

“End poverty in all its forms everywhere” is the first goal of the Sustainable Development Goals (SDG). As world fights to eradicate poverty, recently, on October 17th, International Day for the Eradication of Poverty was celebrated. The theme for this year was “Building a sustainable future: Coming together to end poverty and discrimination”.  Since 1993 this day had been celebrated worldwide to raise awareness about poverty and the need to eradicate poverty, including extreme poverty.

WVIM has always been passionate about caring for the poor and we are even more enthusiastic continue our work to eradicate extreme poverty in Mongolia together with the community and partners.