Having passion to serve others and put a smile on their faces is something not many people who live in the settlements of Port Moresby, where poverty and unemployment are high, can manage.

Residents of 8-mile are individuals and families from all over PNG, with different cultures and languages. This sometimes makes it challenging to live together harmoniously as differences may give way to other challenges and problems. Issues associated with living in the settlements include law and order, gender-based violence, prostitution, child labour, street gangs and street fighting and substance abuse including alcoholic and drug-assosiated abuse, among others.  Many children miss out on education due to various reasons including distance for young children to walk to school, parents and caregivers not able to afford daily bus fares and lunch needs as well as security reasons. 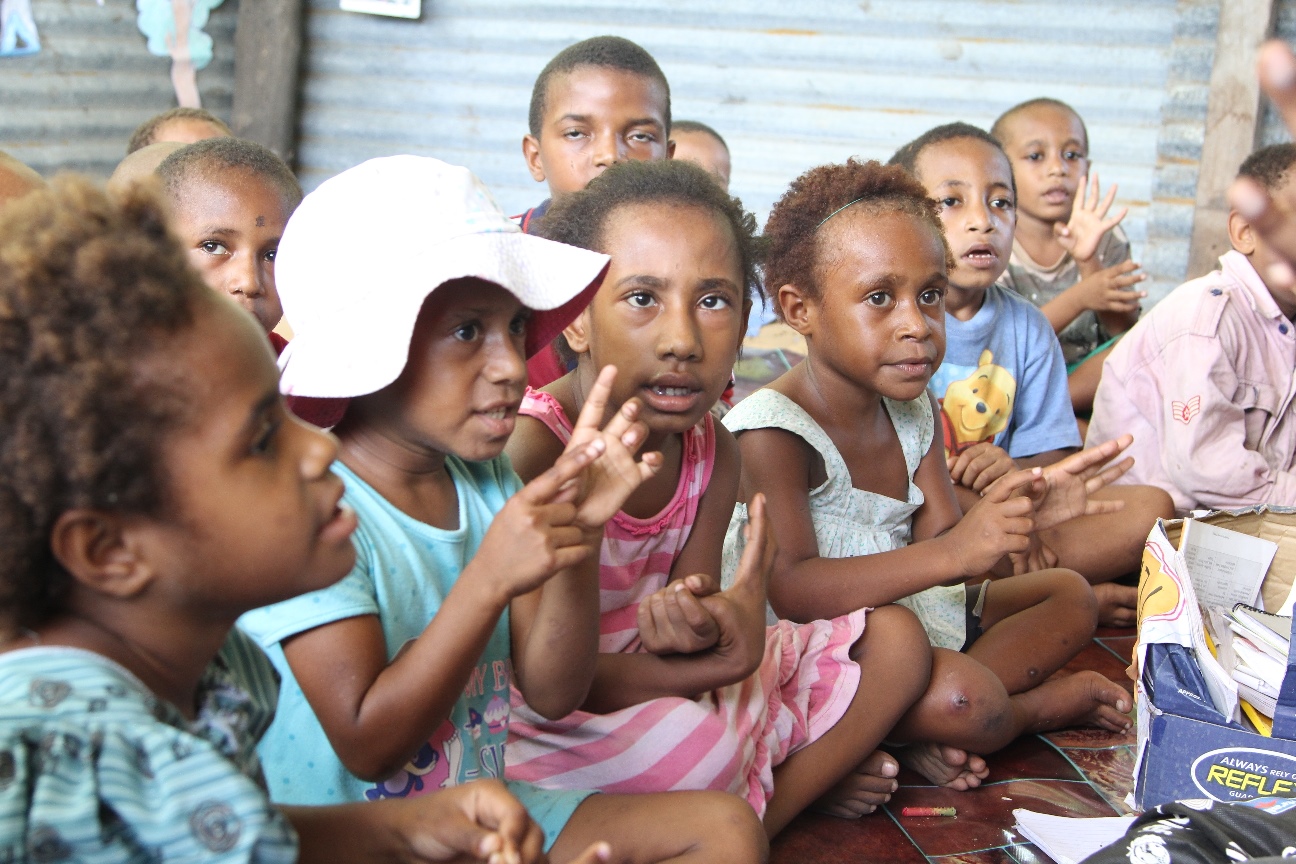 Among these residents is 32-year old Demlyn Dama. Demlyn’s parents moved to 8-mile in the early 1980s. Her late father was a devoted Christian who always helped those in need. His conviction to serve others inspired Demlyn who wanted to make a difference and bring change in her community. It was difficult for her at first as she was married and had to care for her young children.

Her conviction to help children who were left unattended and roaming around in the settlement instead of being in school grew. In 2011, her father passed away and she wanted to establish an early learning centre and Bible play school in memory of her late father and his passion to help others.  Being unemployed and armed only with her Grade 10 level educational did not discourage her. She was determined to see these children had a place to learn.

“My father devoted his life to serve people ever since I was a child, and I have been brought up in an environment where our family served other people who needed our help,” said Demlyn.

After attending training facilitated by the Seventh Day Advertist Church on early childhood learning, she started working with, and teaching, children at her local church. But her dream to do much more and include children outside the church deepened. In 2012, Demlyn pursued her dream to help children while honouring the memory of her fathers’ passion to help others. She started running classes for children aged 6 to10 under a mango tree beside her home. Despite having no resources like books, pencils or scrap paper, children were happy to have a place to learn. 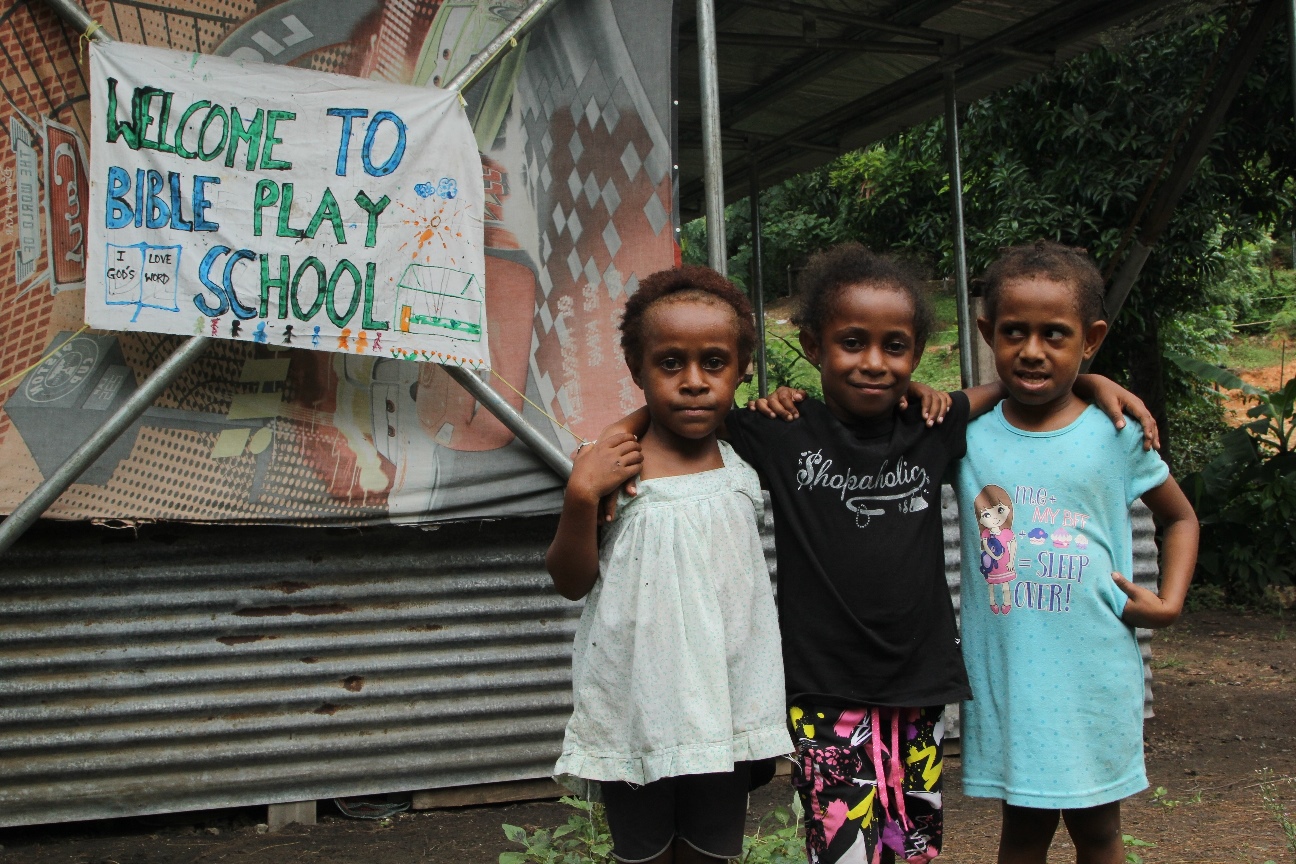 Bible Play School students and best friends Esther (5), Serina (6) and Rhonda (6) pose for a photo in front of their classrom and school. Photo:Tommy Maima/World Vision.

“I started teaching less than ten children with no support at all. We found pieces of paper, cardboard and other trash and turned these into learning kits,” recalled Demlyn.

“At first parents and caregivers agreed to pay fifty toea (US$ 0.13) weekly for me to buy stationery. Though it was not really sufficient, it was a start and I was grateful, ” added Demlyn.

Each year the number of children increased as they continued to sit and learn under the mango tree. When it rained, learning was suspended until the area dried and was comfortable again for the children. 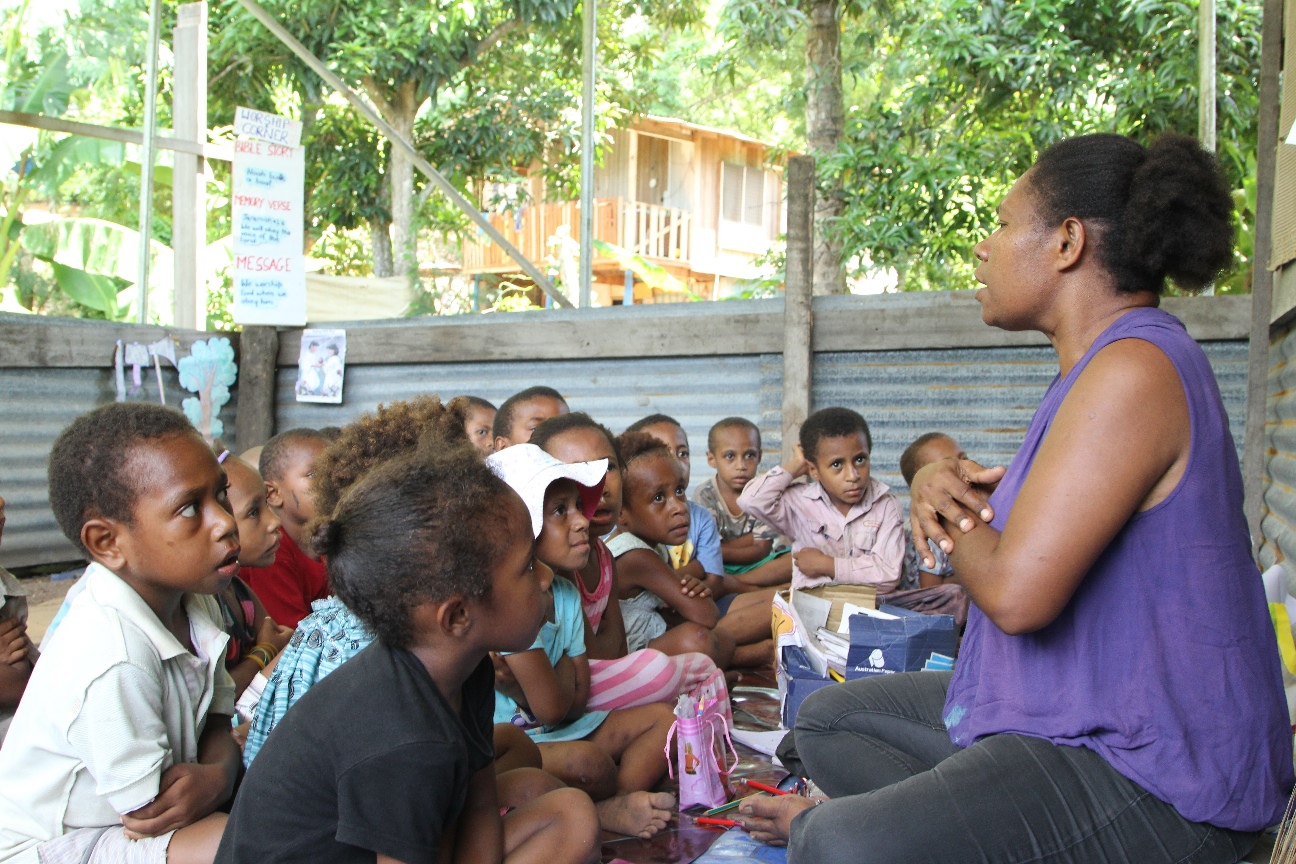 In 2015, Demlyn and other volunteers from the project's eight target communities were selected to attend Early Childhood Education (ECE) training with the PNG International Education Agency (IEA), a private education training organisation in PNG. Demlyn will graduate in August this year with a Certificate 3 in Early Childhood Care and Education Teaching with 21 other volunteer teachers, including elementary and primary school teachers. 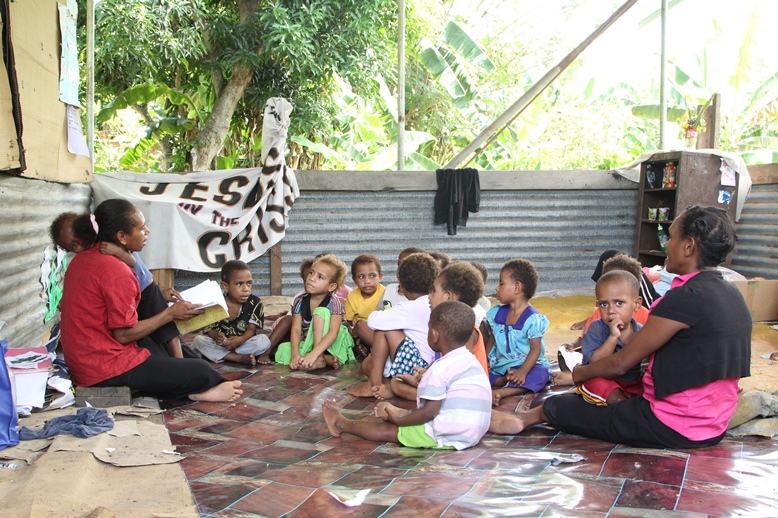 Children aged up to 6 during storytime at the 8-Mile Bible Play School. Photo: Tommy Maima/World Vision.

The project has assisted Demlyn’s ‘Bible Play School’ with  resources including a water tank, learning kits and building materials for a permanent classroom which has now been erected and partitioned to cater for two age groups.  Demlyn has also engaged an additional teacher who is now attending training to support her and to cater for the growing number of children each year.

“I’m grateful for the support in ensuring these children have a place to learn to read and write. They now have a protected place to learn when it rains,” said a thankful Demlyn. 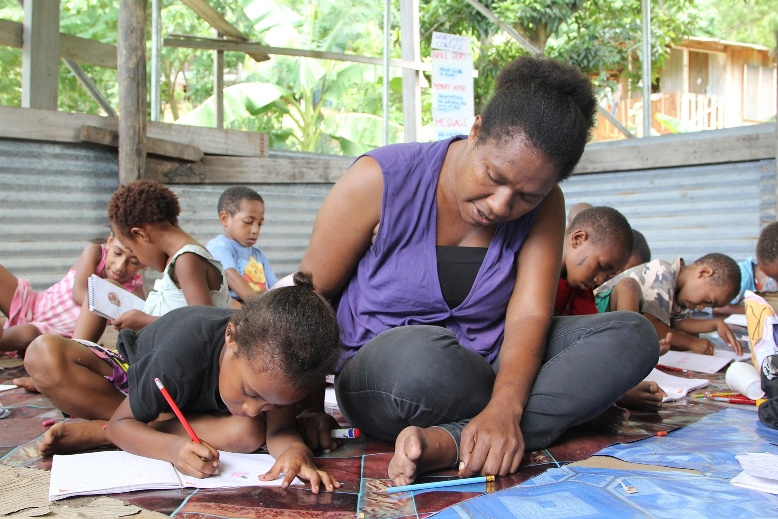 Through the four-year PNG Education Project, six Community Learning Centres (CLCs) were built for communities in Port Moresby including at 8-mile, Mt Moria, ATS, New Erima Primary School and Segani. Three out of these six CLCs are fully completed with trained teachers. 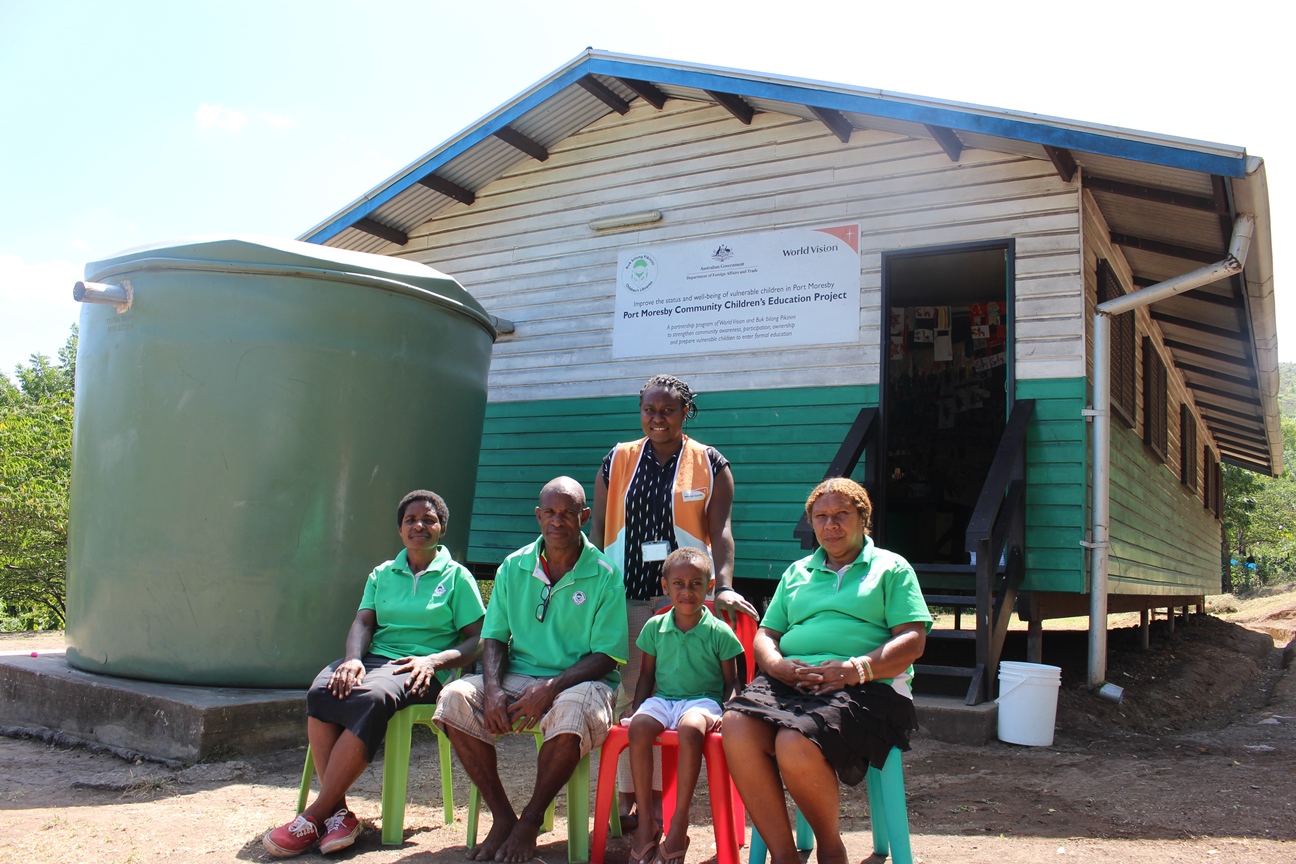 The end of project evaluation report indicated positive outcomes for the project overall, with the Concept About Print (CAP) test showing the project achieved a strong increase in the percentage of 3 to 5 year olds and older children still attending Early Childhood Care and Development (ECCD) classes who can handle a book, read left to right, and recognise letters and words.

The School Readiness Test (SRT) during the end of project evaluation indicated an increase, particularly among boys, in the percentage of children aged 6-7 years and older children still at CLCs or in elementary prep, who tested as ready to progress to Elementary Grade 1, with 89.8% achieving the Ready for School mark on the SRT, up from 78.4% during the baseline (before the project started). The number of children who progressed to formal education and elementary school during the projects’ duration was 544. 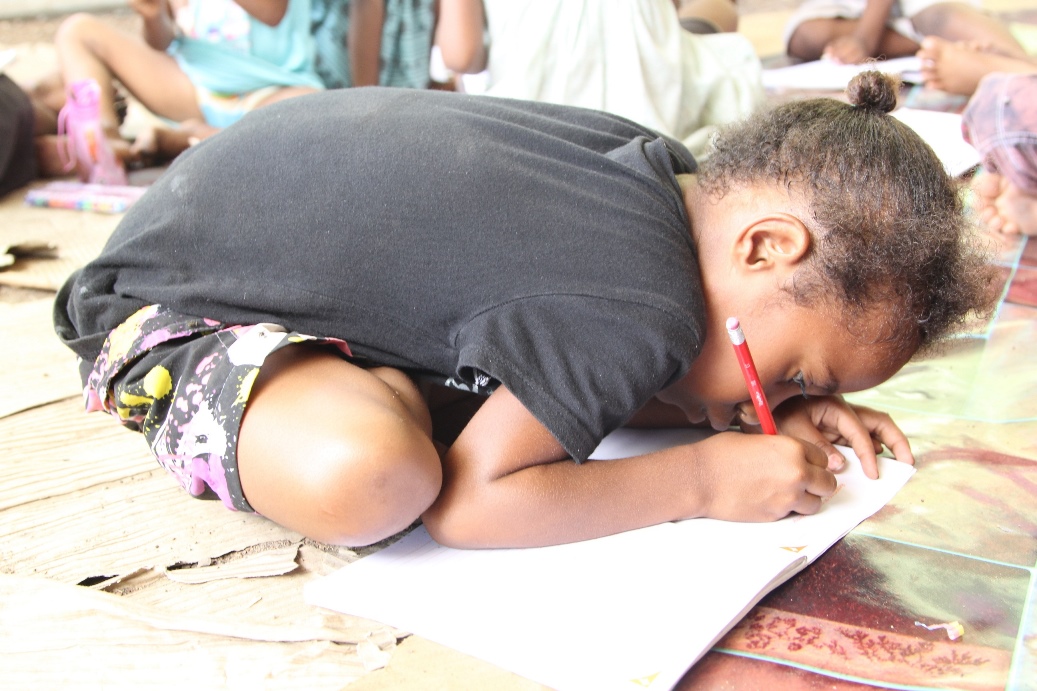 Serena (6) busy in class. The number of children who are now able to handle a book and read from left to right has increased. Photo: Tommy Maima/World Vision.