Vele Emilio is currently World Vision’s Emergency Coordinator for Phase 2 (Recovery/Rehabilitation) of the Southern Highlands Earthquake Response Project. Prior to this assignment, he was the Emergency Logistics Officer for Phase 1 Disaster Relief and Response (Relief Items Distribution). Emilio joined World Vision in 2014 as an Administration Officer, and then later moved in to Humanitarian and Emergency Affairs working as a Disaster Risk Reduction Officer supporting various El Nino disaster projects in five provinces.

In March 2018, a month after the 7.5 magnitude earthquake devastated the Highlands Region in Papua New Guinea, I was deployed as an Emergency Logistics Officer to assist in the relief efforts of World Vision.

Despite my previous experiences in conducting major relief distributions, nothing prepared me for my first trip to our beneficiary communities located at the foot of Mt Bosavi. The communities we visited were so remote, we could only access it through a small chartered plane, land in small airstrips, and walk the rest of the way, sometimes for 3 hours, some even for 12 hours, to reach the rest of the communities.

We traversed through very dense and rugged terrains, climbing steep mountain paths, crossing and swimming across flowing rivers. Mosquitoes, leeches, and ants were our constant companions and we managed to dodge a few deadly poisonous snakes too.

The cold climate and unpredictable weather made our travels even more challenging both physically and mentally, as we endured sleepless nights away from the comfort of our homes and our families.

Finally reaching the communities, I had mixed feelings meeting survivors who were still distressed from the earthquake. I felt happy that we have reached the communities but also felt sad finding them in squalid condition. They seemed to me like a forgotten people. A people whose unfulfilled hopes have been passed from one generation to another, with each generation praying for a wind of change to come their way and turn their hopes into reality. 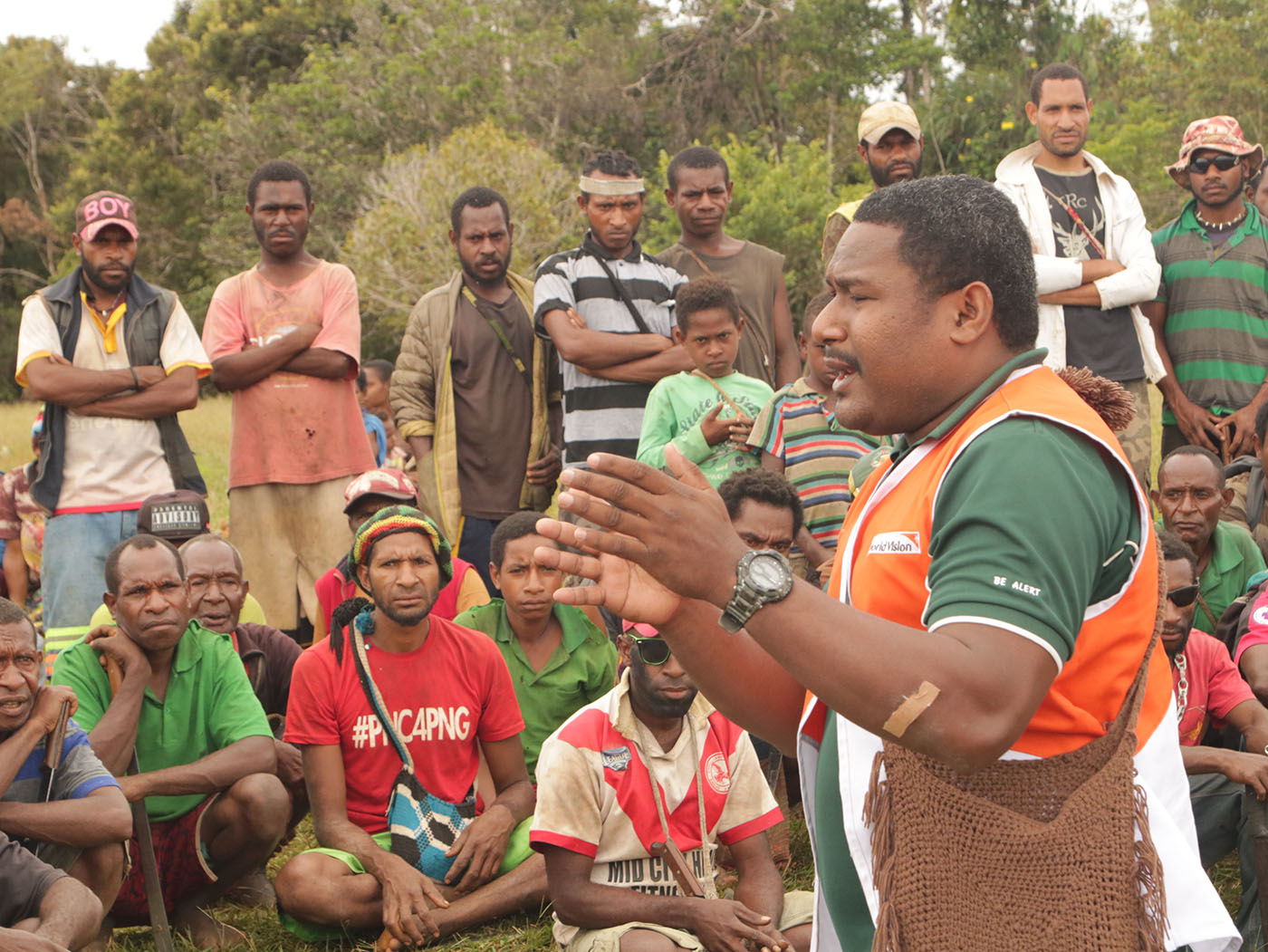 Vele explains to community members the purpose of their visit to their community (Photo: Steven Doe/World Vision )

For someone like me who has lived in urban Port Moresby, I’ve not really understood the struggles that people in rural communities face. But seeing with my own eyes their daily pains and struggles, I was seized with this powerful motivation to keep on moving. I’ve realised that the kind of work we do brings hope to the hopeless.

We couldn’t have done the distribution without the help of ECPNG members who were known and trusted by the communities. The Mission Aviation Fellowship (MAF) helped transport us and airlift our relief items through their charter planes at discounted price, sometimes even free of charge.

By the end of our relief response phase, we managed to reach a total of 989 households or 3,444 individuals with all our relief aids in three communities that were mostly affected by the earthquake. It was a great feat considering the many logistical challenges that we faced hauling all of the items to these communities. 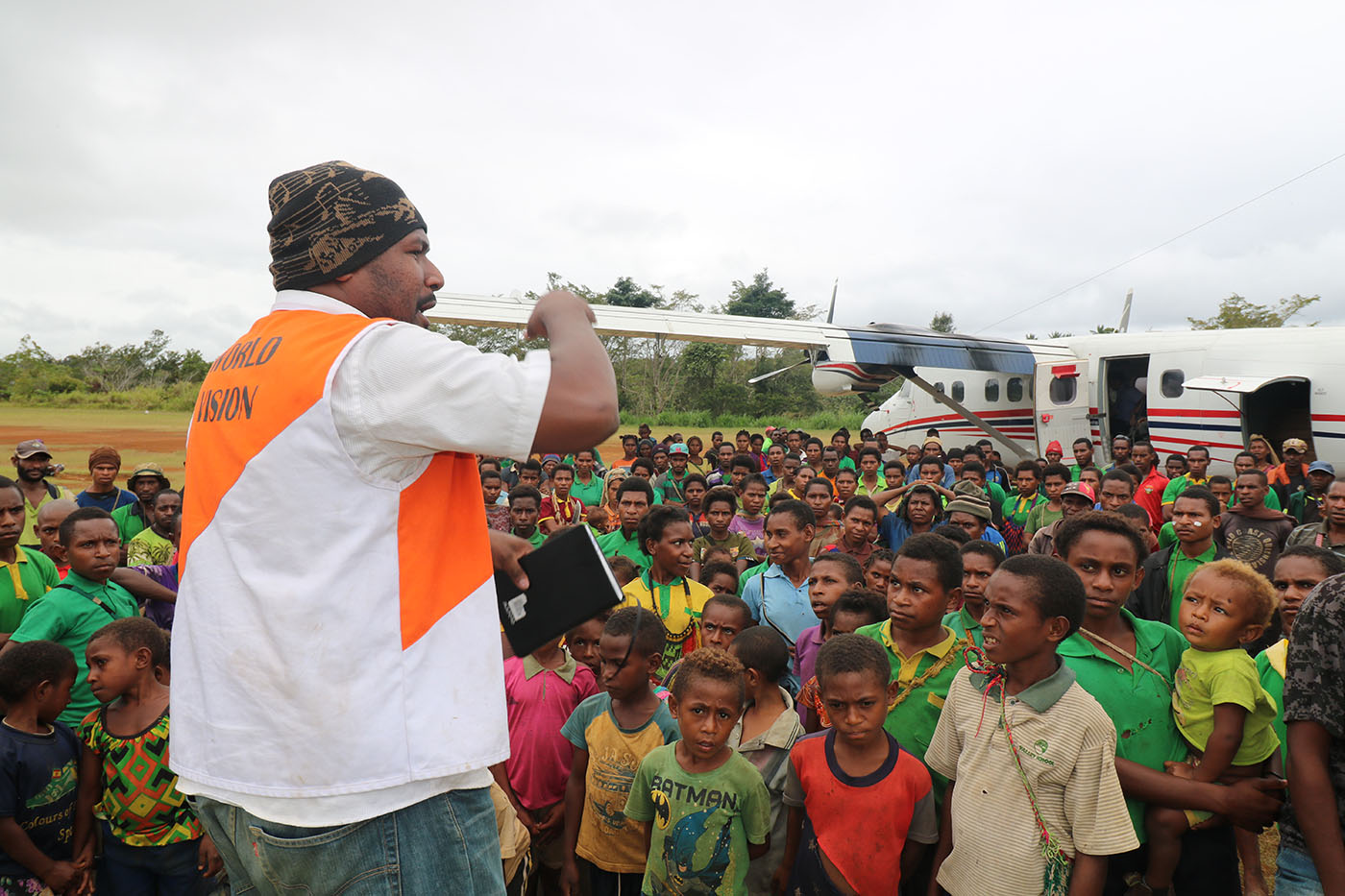 Our ECPNG and MAF partners made sure that we felt safe and welcomed in the communities that we visited.

During the relief item distribution, we had to manage very well the expectations of people, who needed more support than what we could actually give them.

Most of the communities we’ve visited had no functional health aid posts. People, especially mothers and children, had nowhere to go for basic health services.

In one community, I witnessed a pregnant teenage girl struggling with childbirth. She almost died but a local trained traditional midwife helped her deliver her baby boy.

Another mother was not so lucky. The mother, her name is Wendy, is married to Nelson, one of our community partners who helps with casual labour at our relief headquarters at Mt Hagen. Wendy was due to deliver her first baby but suddenly had to be rushed by her parents via bush truck from their little village in Dedesa to Bosavi Station where there was a health aid post.

Nelson had become very close to the World Vision team at Mt Hagen, and recently met Judy Moore, our interim Senior Operations Manager, who came to visit us in Mt Hagen and later joined us in our various trips to the communities (even braving the 12 hour walk to the villages!). We also had, Michael, our HEA Manager with us.

When Nelson learned that his wife gave birth to their baby, he excitedly announced that he will name his son “Judvelmic”, combining Judy’s, Michael’s and my name. The three of us felt very emotional upon learning that a baby will be named after us. And so we planned to visit Wendy at the Bosavi Station where she gave birth. We were at a nearby village at that time and could hike our way to the Bosavi Station.

Unfortunately, the next day, we learned of the devastating news that the baby had died due to birth complications and lack of life-saving equipment (suction machine, oxygen, etc.). 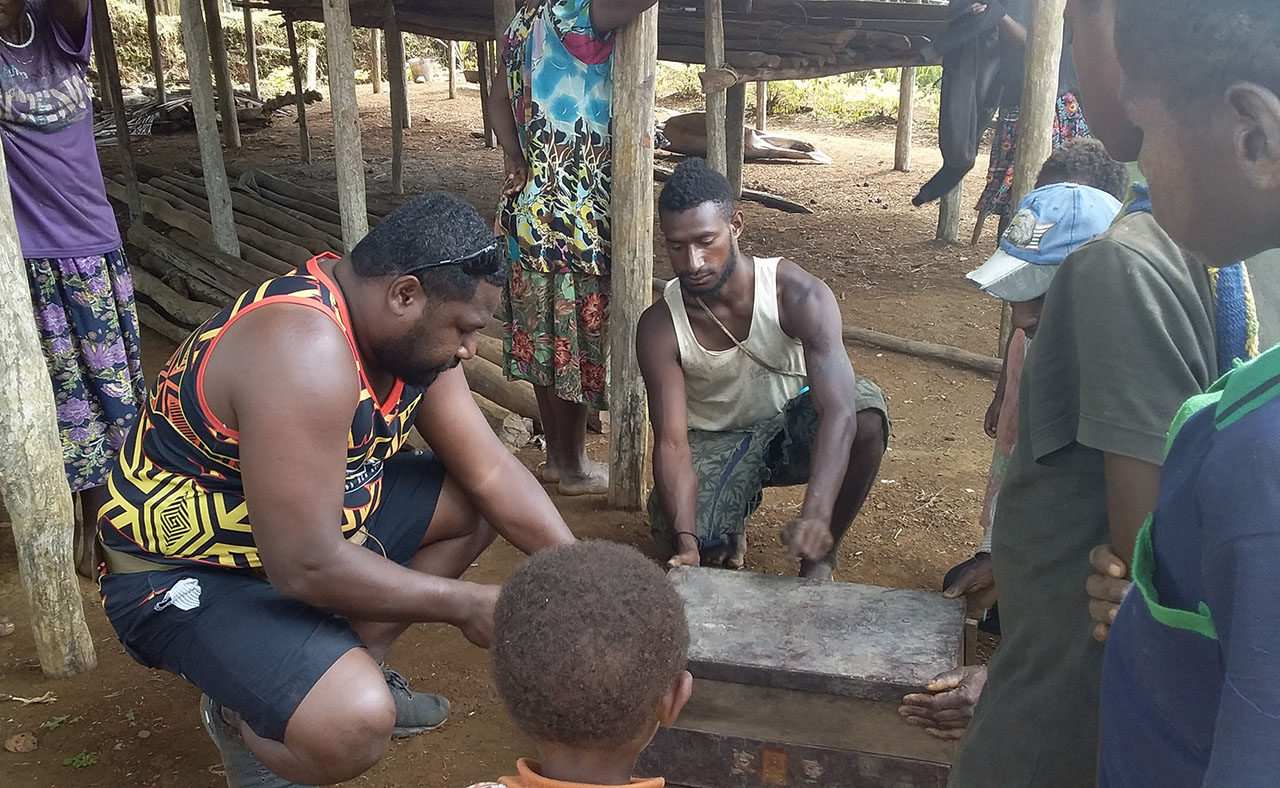 Vele joins some of the men in building a coffin for the baby who passed away the other night. (Photo: World Vision)

I learned that Wendy took her baby back home. I immediately travelled to Wendy’s village to see how she was doing as Nelson, her husband, was still at Mt Hagen. When I arrived, I saw Wendy wrap her dead baby with a blanket for burial. I cried with her. Later that day, me and a few boys constructed a small coffin box for the baby and the burial took place the same day.

It was good that we were there because Wendy was suffering from abdominal pains and had internal bleeding. We cancelled our flight to the next community so we could bring Wendy to Mt Hagen General Hospital. There, she received proper care and got reunited with Nelson. When Wendy was later discharged we were able to provide her with accommodation and meals until she was well enough to travel back with her husband to their village. 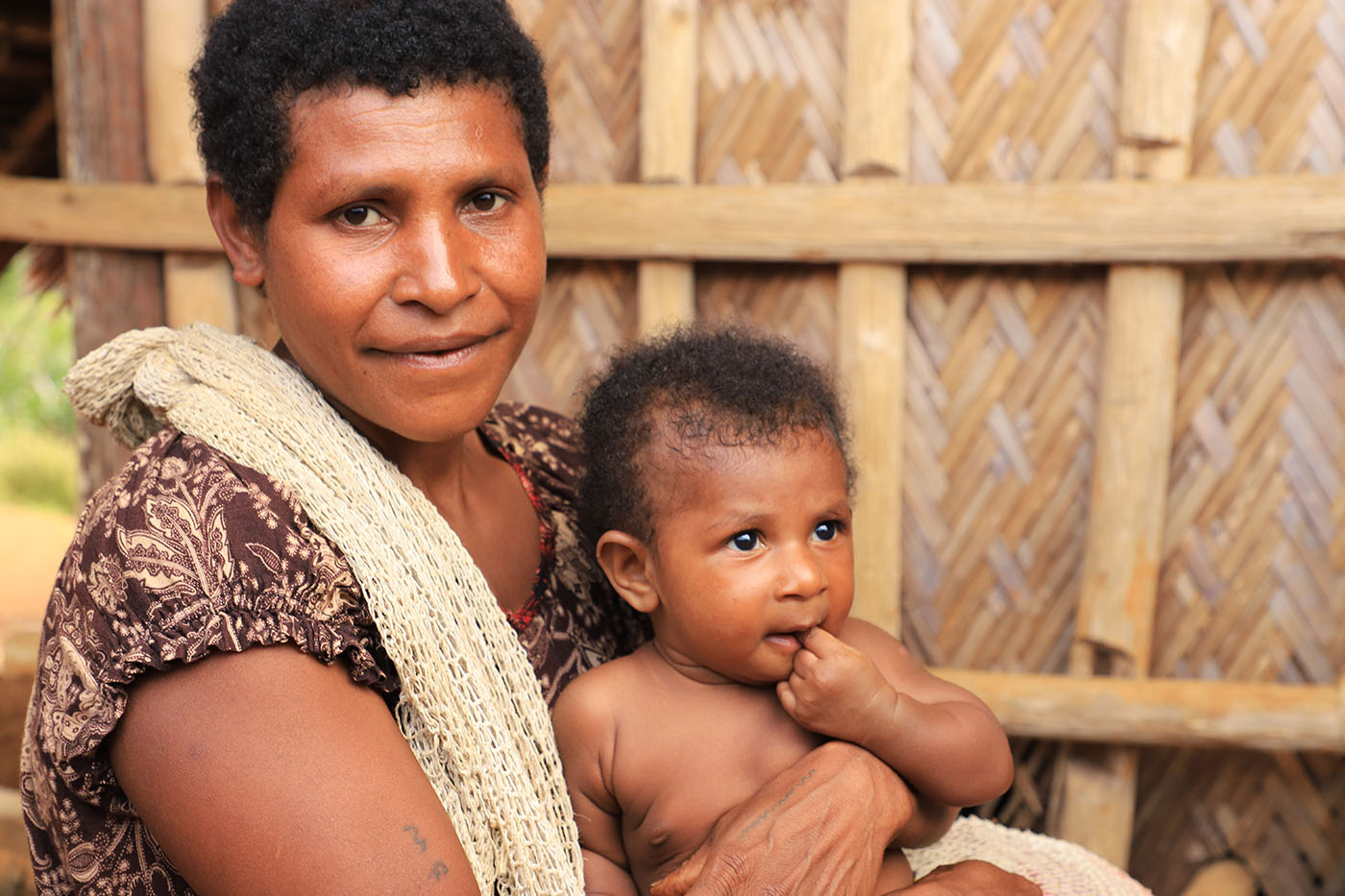 Mothers and children struggle to access basic health services in the communities that Vele has visited (Photo: Steven Doe/World Vision)

In my visits to other communities, I would meet mothers who also struggled with their own child births and pregnancies. Most of the women I spoke with did not receive any antenatal check-up, and most of the births were not supervised by skilled birth attendants.

And so in the several air trips we’ve made, we’ve had the opportunity to transport mothers who’ve suffered from various birth delivery complications such as retained placentas, neonatal infections, so that they can be brought to the only hospital in the province and receive proper care.

I learned that many people, especially children, have suffered and died of common diseases like diarrhoea, pneumonia, snake bites, and malaria.

For the recovery and rehabilitation phase of our response (supported by the New Zealand Aid Programme), we went back to these communities and other nearby communities to construct water tanks and toilets in aid posts and schools. Transporting construction materials and big water tanks was even more challenging, but with our ECPNG and MAF partners, we managed to bring all the raw materials into the communities. We also had much needed help from the PNG government’s Emergency Controllers Office Logistics Team which airlifted all of our water tanks from the Oil Search Foundation Moro base to our various construction sites. They also provided us two additional water tanks, benefitting two more communities.

Men and women from the communities helped with the work, which was really great because it fostered a strong sense of ownership and they also learned how to repair the tanks and the toilets. It was very important for us to be able to pass on these skills to the community so that they can maintain the facilities long after we’re gone.

A total of 14 water tanks and 24 ventilated improved (VIP) toilets in schools and aid posts eight beneficiary communities in the Southern Highlands Province.

Doing relief and rehabilitation work in the remotest part of Papua New Guinea comes with many challenges, but many rewards too. Aside from the satisfaction of helping my people, there were also memorable moments wherein we were welcomed by communities as very special guests. In my entire career, I was never given a special chair to sit, offered a garland of fragrant colourful flowers, except on graduation days. It is a humbling experience for me to be welcomed this way.

I was even asked to give speeches, which I thought I had no skill on. I didn’t know that I had the skill to pull it off, but I managed to communicate and engage with our beneficiaries despite the sometimes volatile and hostile reception we would get from some community members, instilling peace and common understanding and addressing people’s negative perceptions about us with much courage and good will that I never thought I could muster.

I can say that I have come out of this experience braver and bolder and ready to do more for my people. Their struggles are propelling me to do more for them and I am so privileged to be able to contribute my passion, my time, and my talents to help uplift their lives.