Only two in every five children worldwide are breastfed during their first six months. When evidence shows that increasing breastfeeding would prevent more than 800,000 child deaths globally, helping women breastfeed should be a universal priority. But in many countries, it isn’t.

While breastfeeding is usually thought of something that just happens between a mother and her child, in reality a mother cannot do it on her own. Not only does she need the wisdom and guidance of more experienced women, but the new mother also needs time, resources, and, if she has a job, family-friendly policies such as paid maternity leave, access to childcare, breastfeeding breaks and dedicated nursing spaces.

Without such policies, returning to paid or unpaid work is one of the greatest barriers to breastfeeding. [1]

As with all of the Sustainable Development Goals, effective partnerships are crucial to ensuring proper nutrition for babies. One of our best examples of collaborating with others to empower parents and enable breastfeeding is a project in the Philippines. Due to a variety of factors such as the complexity of working while exclusively breastfeeding, cultural norms, and low awareness of breastfeeding’s value, exclusive breastfeeding rates here are 34 per cent—far below the target of 50 per cent. This, despite the enactment of legal instruments supportive of breastfeeding.

To help create an enabling environment to support women to breastfeed, World Vision in the Philippines launched the Crowd-based Monitoring for Milk Code Compliance (CMMCC) project (or the Mother-Baby Friendly Philippines project) in November 2016. The project’s objectives included improving enactment of legislation such as the Expanded Breastfeeding Promotion Act of 2009, which entitles working breastfeeding mothers to a clean, private lactation station and a lactation break as well as mandates that all workplaces have a written breastfeeding policy.

The project also aims to increase the capacity of local government units to enforce such legislation; it is increasing public awareness about the laws governing breastfeeding; and it increases awareness of, and a positive attitude among health workers about a woman’s right to breastfeed when she returns to work.

Perhaps one of the most impactful project objectives was identifying and engaging partners who could help make this project a success. World Vision worked with a variety of stakeholders including the Government’s Department of Health and Food and Drug Administration, nursing colleges, national coalitions and many more. Most recently World Vision signed a Memorandum of Agreement with the People’ Management Association of the Philippines, the largest business association in the Philippines, to assist in the development and implementation of workplace breastfeeding policies.

Is this project making a difference? Yes, not least among new mothers. As part of the Mother-Baby Friendly Philippines project, World Vision conducted a series of awareness campaigns with nursing students and mothers to let them know about the laws that protect a woman’s right to breastfeed, even after she returns to work. After one of the sessions, a mother told us, “Wala, hindi ko alam yan. Wala namang ganoon sa kumpanya namin (I have been totally unaware of this law until now. My employer has not made me aware of it).” Each new mother who knows their rights and the importance of breastfeeding themselves becomes an advocate in their family and community.

The project is also making a difference at the national level too. World Vision worked with the technical working group that drafted the rules and regulations for Health and Nutrition of Mother and child and the Expanded Maternity Leave Act and celebrated when this important law was passed.

Given that breastfeeding promotes cognitive development and reduces the burden of childhood and maternal illness, everyone working together to promote breastfeeding makes sense, not just for mother and baby, but also for the future of the Philippines. Perhaps this country’s example will encourage others to emulate its success. 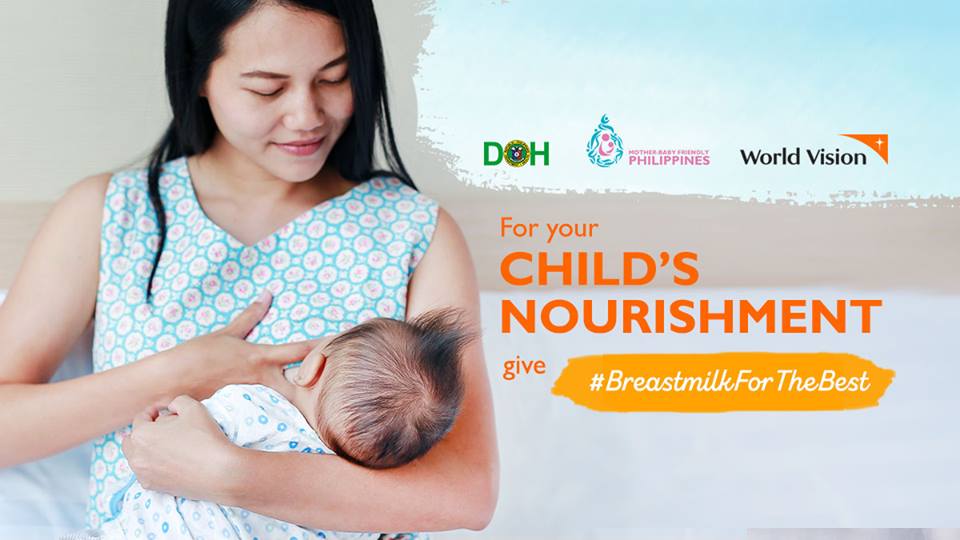 Every year from August 1-7, the international health community recognises World Breastfeeding Week and focuses on a different aspect of breastfeeding. This year’s theme, “Empower Parents, Enable Breastfeeding” emphasises that sustaining and scaling up optimal breastfeeding includes supporting parents at work.