In 2000, the Millennium Development Goals (MDGs) set 15-year targets for significant improvements in survival, well-being and development for the world’s most vulnerable populations.  Much progress has been made, but in 2008, a landmark series of papers published in The Lancet journal drew global attention to the need for a renewed focus on improving nutrition in order to achieve the MDGs.

Although nutrition is an explicit target of MDG 1, it underpins most of the others.  In particular, good nutrition during the first 1000 days of a child’s life (from conception to second birthday) lays a foundation for life-long healthy growth and development.  Building human development capacity is the key to achieving all of the MDGs, yet millions of children continue to have their physical and cognitive potential compromised by poor nutrition.

With just one year left on the MDGs, it’s fitting that World Breastfeeding Week 2014, celebrated from August 1–7, focuses on the importance of breastfeeding to achieving global development targets.  Here’s how breastfeeding contributes to each of the MDGs: 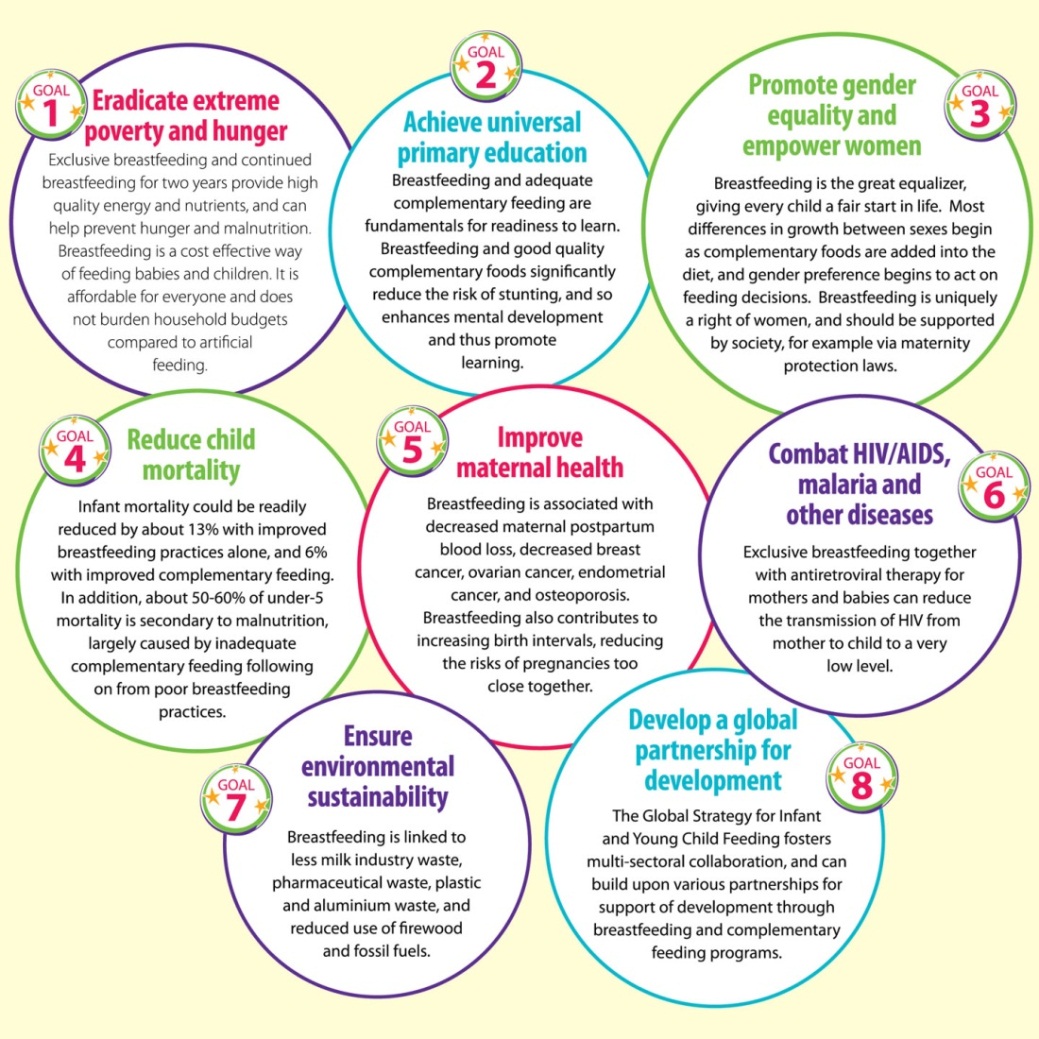 Although many, if not most, infants around the world experience some breastfeeding, there is a long way to go to achieving exclusive breastfeeding for all, a critical component of optimum nutrition in the first 1000 days. Exclusive breastfeeding (a diet of breast milk only with no other liquids or solids—not even water) for the first six months of a child’s life is one of the most important interventions to ensure a child’s survival, healthy growth and development.

Breast milk is free of charge and universally available, even in very resource constrained settings, yet fewer than 40% of infants in the developing world are exclusively breastfed.  The reasons for this include the common belief that breastfeeding is not enough to satisfy a growing infant; cultural practices, such as those that require infants to be ‘cleansed’ with specific foods; aggressive marketing of infant formula; a lack of competent breastfeeding counsellors; and heavy workloads for mothers, including inadequate maternity leave provision.

Exclusive breastfeeding is a core component of World Vision’s Health and Nutrition package of interventions.  It is also a global priority.  In 2012, the World Health Assembly approved a Comprehensive Implementation Plan for Maternal, Infant and Child Nutrition, which includes a goal of increasing exclusive breastfeeding rates to at least 50% by 2025. 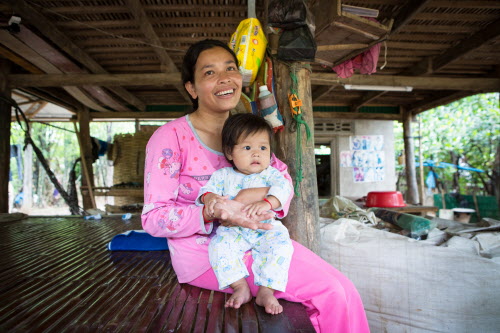 Vanny Paeng with her 6 month old daughter Ichin, is visited by World Vision trained health workers, who visit all new mothers instructing them on breastfeeding, nutrition and pre-natal care. Photo by Paul Bettings

At the family and community level, behaviour change communication initiatives help create a culture that supports mothers to exclusively breastfeed their infants. A key to increasing rates of immediate and exclusive breastfeeding is involving grandmothers, as they play a critical role in caring for mothers, infants and young children in most cultures. Frontline development workers also promote and model optimal breastfeeding practices, leading by example.

Read how one woman overcame many obstacles to exclusively breastfeed her son and encourage other mothers to do the same.

Such examples of vital grassroots movement relies on a supportive health system, where nurses, doctors, midwives and other health professionals are well equipped and motivated to promote and support optimal breastfeeding practices. There is a great need for on-going capacity building, expansion of the Baby Friendly Hospital and Community Initiatives, and close control of infant formula marketing.

World Vision offices in Asia Pacific region are working toward recognition through the internal Mother Baby Friendly Office Initiative, which sets standards for a workplace culture that supports pregnant and breastfeeding staff.

With empowered change agents at the community level, competent health care providers and a supportive policy environment, many more infants stand to receive the lifelong benefits of one of the most vital nutrition interventions—exclusive breastfeeding. There’s no better time than World Breastfeeding Week to consider a greater contribution to the MDGs through the promotion, protection and support of breastfeeding: A Winning Goal – for Life!