For the women of Badghis, Afghanistan, life is mostly confined to the four walls of their houses. Often they are locked away in a conservative culture that affords women few rights and believes them to be inferior to men. Many had no choice but to bury their childhood ambitions in the daily ups and downs of life. Little did they realise that one day they would find a way to show their talents and become financially independent.

The buzz of laughter fills the air. Women move about free from fear and hesitation. They can breathe, see and experience the world out of the burqa’s bound, which is rare in Badghis, where women are restricted by culture and religion, and where their view of the world is filtered through a thin ribbon of semi-transparent fabric mesh – the only window to the outside world.

But they come to this space every morning, retire their burqas, feel the morning breeze on their faces and chat with each other while selling their arts, crafts and products to other women. And at the end of the day they leave with the money they have earned.

Coming to the women’s market and having a shop wasn’t easy. Even before Fatima learned of the women’s market she had dreamed of having her own women’s clothing shop, but from the beginning of the process it turned out to be more complicated than she had imagined.

Fatima’s husband works selling sandwiches in the bazar, where he earns barely enough to meet the family’s expenses. Even so, he wasn’t convinced that she should go to work. Coming from a traditional background, he was not happy with the idea. As long as he could remember, he had seen women at home taking care of children, and busy with cooking and washing; he couldn’t digest the idea of women working outside of the home.

“Having a shop!” Fatima remembers her husband saying when she first brought up the women’s market. “Are you feeling okay!? What do you want to do there? Stay at home and take care of your children. I don’t need your money.” And then he raised the volume of the TV.

According to Ms. Zarghona Shirzad, head of the Badghis Department of Women’s Affairs (DoWA), “Traditionally women in Badghis have few opportunities to leave their houses. Apart from the usual…daily tasks such as cooking and washing.” If women do have other skills, their talents and arts are hidden from the outside world. “When the idea of the women’s market was raised,” says Shirzad, “we worked with World Vision to conduct several meetings with the governor and religious affairs department to seek their support [for the market]. The Imams promised to preach about women’s rights and social activities during Friday prayers and the Badghis mayor agreed to provide a building free of charge.”

Religious leaders allocated two Friday prayers each month to discuss the women’s market and convince men that women working outside of the home is acceptable within the framework of Islam. The sermons not only changed many men’s perspectives on social and economic possibilities for women, but also acted as an advertisement whereby the DoWA started receiving applications for market space.

Shirzad adds that at the beginning of the campaign she received many threats through letters and calls from men who were against the idea; but she and her support network persisted. “Religious leaders played an important role in quelling the anger of opponents,” she says.

The preaching worked well enough that, one day, after returning from a Friday prayer, Fatima’s husband asked her if she still wanted to work in the market. “I just said Yes! Loudly!” 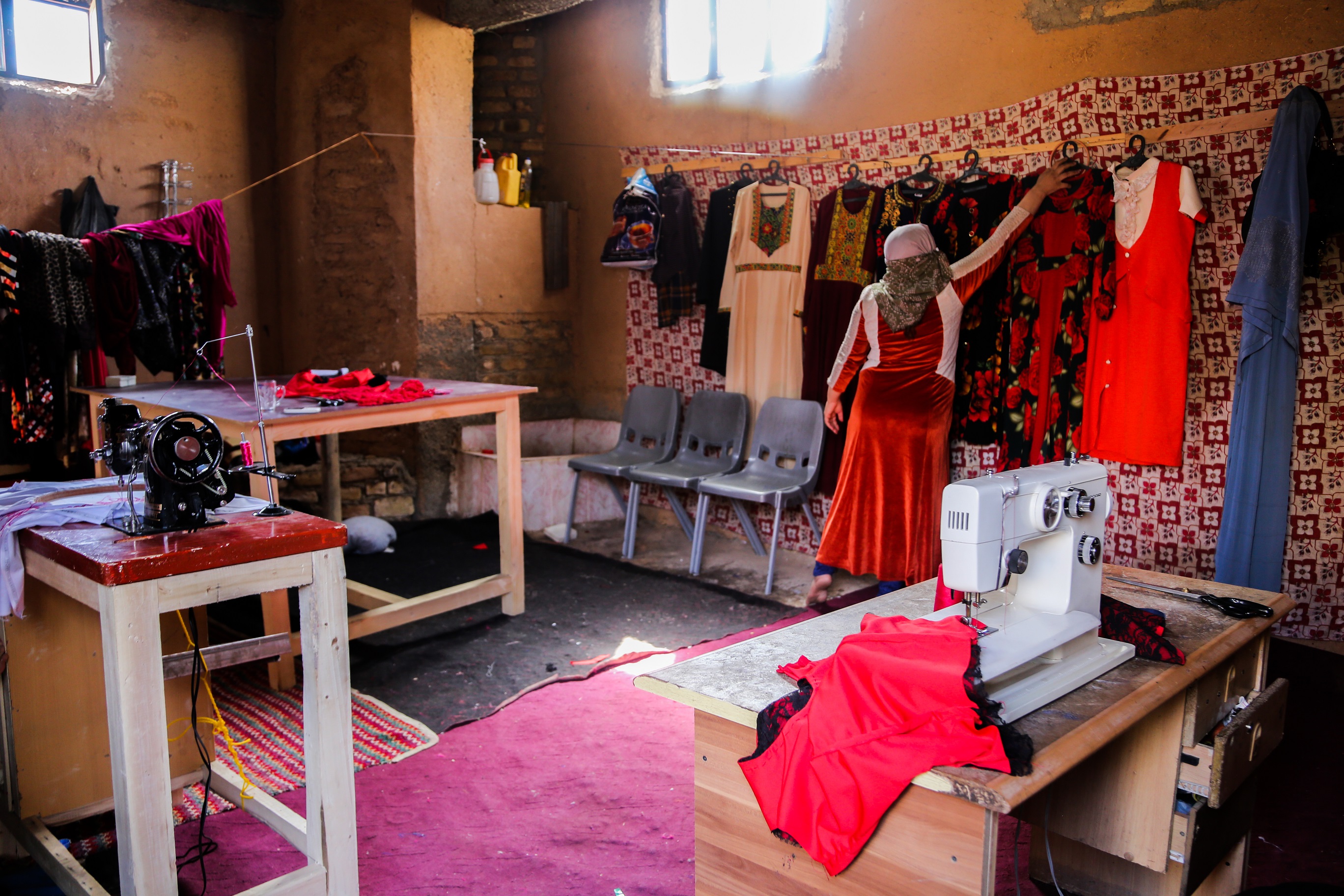 One year has passed since Fatima opened her shop in the market. She’s smiling from ear to ear. “I have two to three customers a day. I charge 150 to 300 Afs for every item of clothing I tailor.” Though in the beginning she didn’t have many customers as women in the city had yet to discover the market, business has since improved.

“I am so glad. Before, my income wasn’t good at home and I always asked my husband to give me money if I wanted to buy something for myself. But now I go home in the evenings with money and on my way home I buy whatever I want for myself and the children.” They even hired a nanny to take care of the children while Fatima is working.

The market has not only given Fatima financial independence but has also helped her emotionally. She feels more relaxed. “Every morning when I come here, I leave my family problems at home and chat and laugh with women in the market. I really don’t feel the passing of time. We talk and share experiences with each other. We can joke and forget life’s challenges for a while.”

Most market vendors in Badghis are men, and often women don’t feel confident enough to go to the market alone; they prefer when the man does the shopping. Coming to the women’s market, however, has allowed them to shop according to their taste and style.

“When I was at home,” says Fatima, “I asked my husband to buy what my children and I needed. In the city each shop is in a different location, and I didn’t know the city very well. This market, though, has most of what women may need, like shoes, clothes, even ice cream and a private clinic.” She adds that, with continued World Vision support, they even have an opportunity to establish a women’s gym and sports club, the first of its kind in the city. 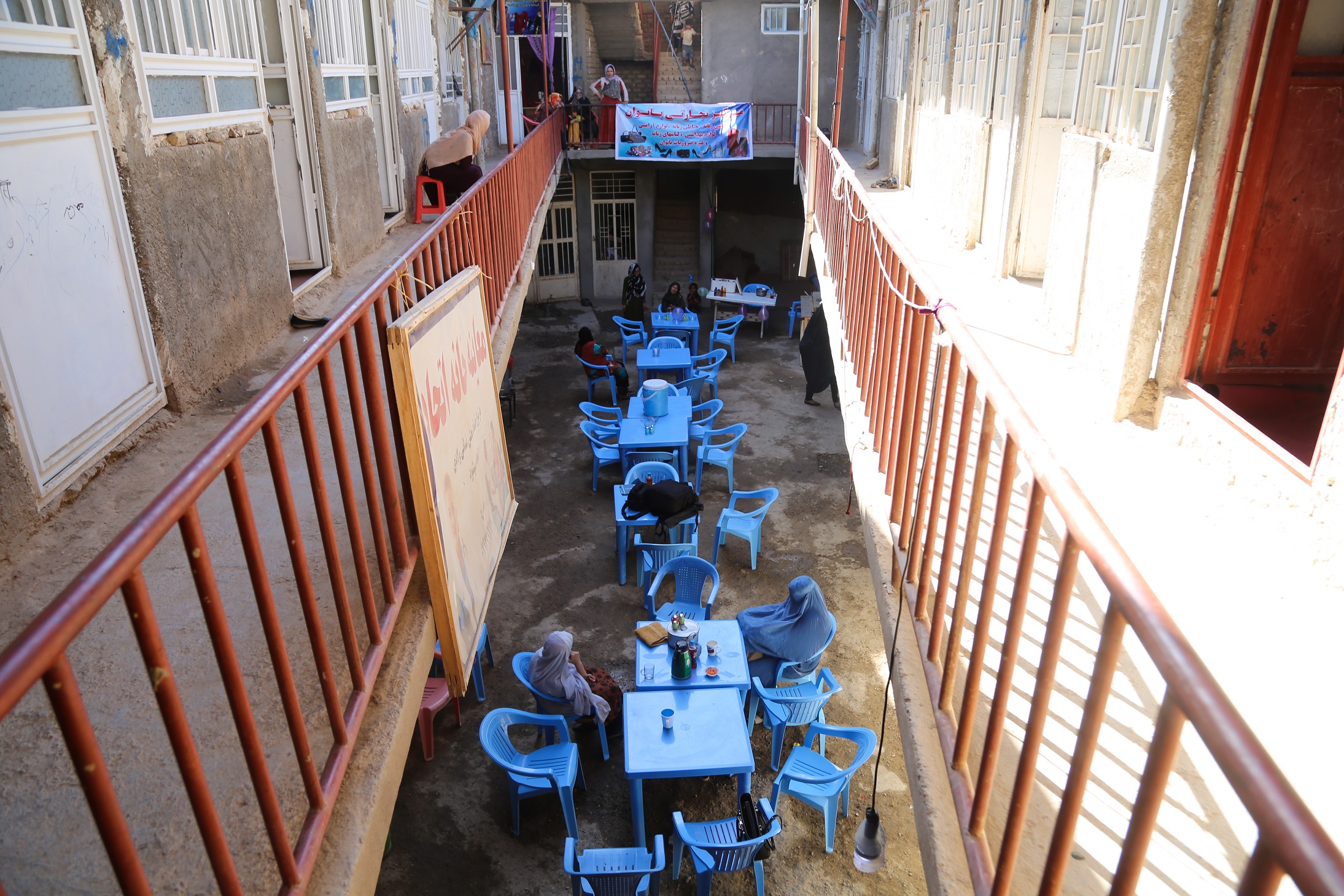 An inside view of the Women's Market

About the women’s market:

Through a programme funded by the Australian Government, DFAT, World Vision works in Badghis to increase the resilience of communities, specifically woman-headed households, and to build opportunities for developing sustainable incomes.

The idea of developing a market for women in Badghis was brought about by the programme team in order to create a safe and potentially profitable opportunity for woman entrepreneurs in Badghis to sell their products and gain exposure to the larger markets and customer bases in the province.

The project has distributed necessary materials to beneficiaries such as tailoring equipment, refrigerators and beauty salon supplies. On average, each woman in the market makes between 8,000-10,000 Afs per month (USD $100-130), where other women in Western Afghanistan make only 800 Afs, according to the Survey of Afghan People in 2016.

As a result of advocacy efforts by project staff at the local and national levels, the government is currently constructing a three-storey, 45 shop building specifically for woman-run businesses.