The day is hot. Nangote bends at a tap stand and drinks water with her hands, doing it so perfectly. Her 5-liter jerry can is almost full on the other tap stand. Now 12, Nangote Peter came to Uganda in 2015, together with her mother and two siblings, her father left behind in South Sudan.

‘’Today is food distribution day so my mother will be back in the evening. She also brings home water to cook our food. ‘Nangote says. With her at the water stand was her two friends Becky Night and Joyce Ibila, both 11 years old. All of them reside at Maaji 3 Refugee Settlement in Adjumani district of northern Uganda.

‘’Last year I never liked to fetch water because I would walk a very long distance and wait for more than two hours to fill my 5-liter jerry can. But now the water is near my home and I don’t have to stand in the line for long’’, Nangote adds with a smile. 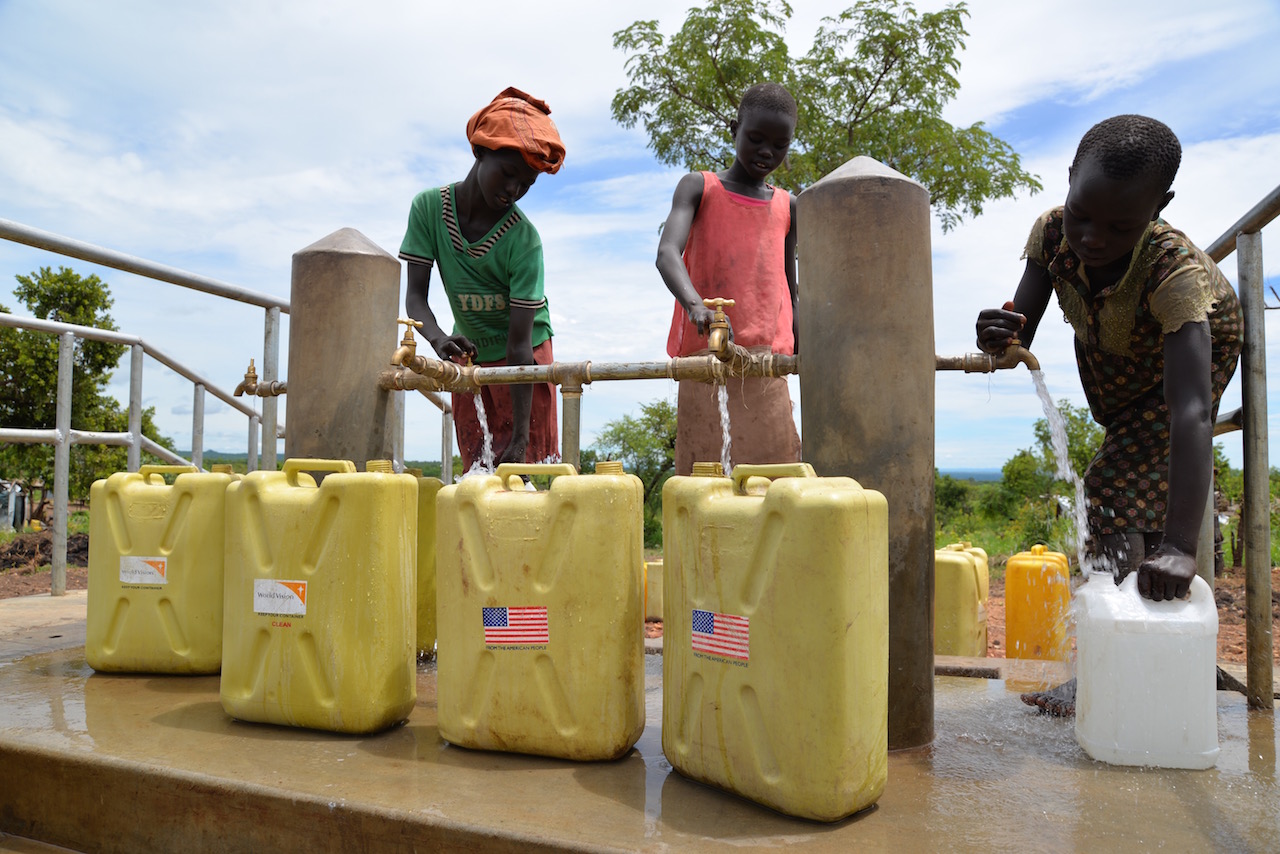 World Vision in partnership with the Bureau of Population, Refugees and Migration (BPRM) has set up a motorized solar piped water system in Maaji Settlement. The system pumps 14,000 litres of clean water every hour and supplies it to 7,000 people every day.

‘’The water from solar-powered system is then stored in a tank with a capacity of 30,000 liters. The tank allows distribution across six supply tap stands with six active running taps supplying both refugees and host communities’’, says Emmanuel Opoki, World Vision’s Water, Sanitation and Hygiene (WASH) Manager.

Opoki says the system was originally designed to serve 6,000 people per day but it now serves as much as 7,000.  “The 6,500 beneficiaries are inside the settlement while 500 are from host communities. Out of the six tap stands, four are used by refugees while two are for host communities”, he adds. 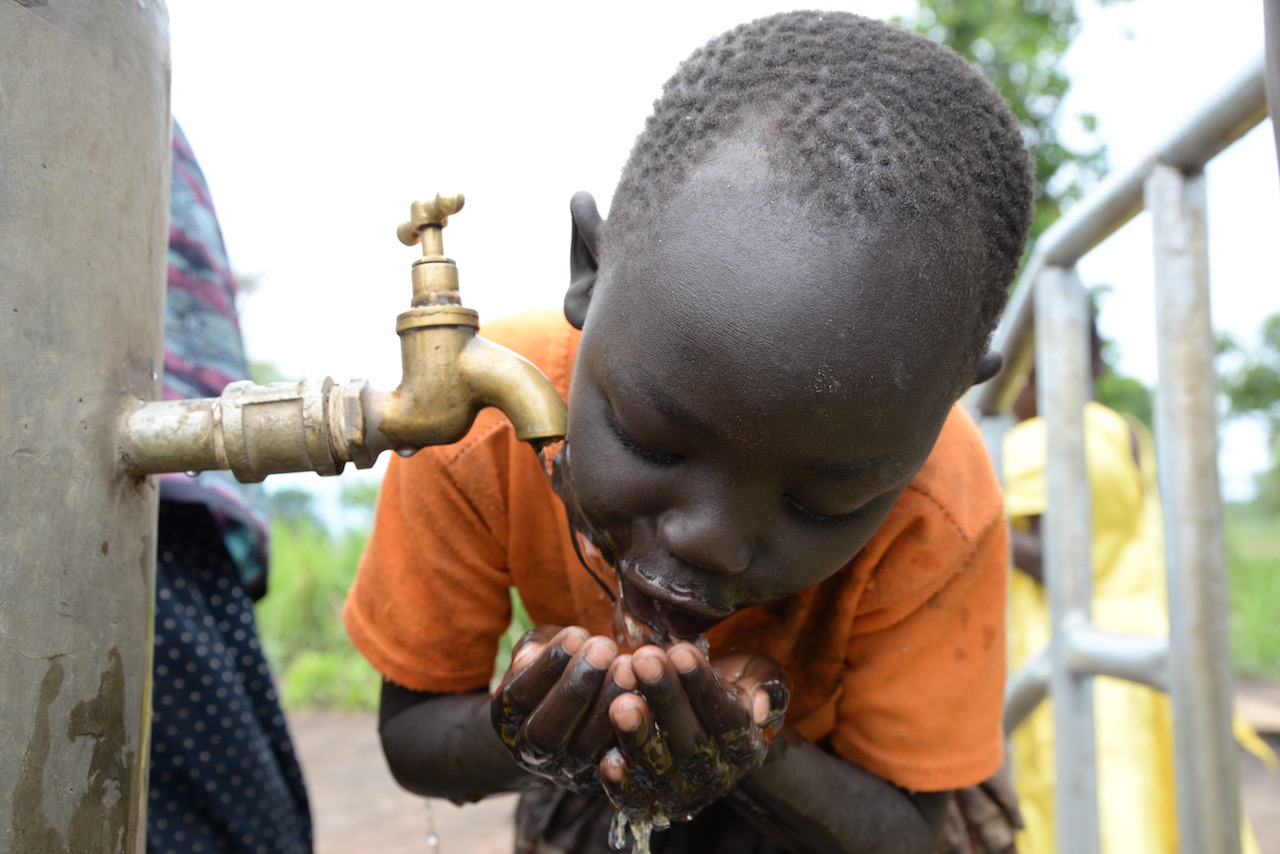 Water supply still remains a big challenge in the refugee settlements in Uganda. In most areas, water is ferried by trucks daily. If the water delivery is late, hundreds of refugees would wait for hours. Children like Nangote find it hard to fetch water at such collection points.

‘’Agencies need to move away from water trucking and adapt the motorized water systems. The cost of ferrying water for 50,000 people every month is equivalent to the total cost of setting up the system. Water trucking is good for short term interventions but in the longer run it becomes more costly and less effective”, Opoki explains.

The total average cost of a motorized water piped system is USD$100,000 and its life span is normally between 10-15 years. World Vision has managed to secure funding to set up three additional solar motorized water systems.

Three of the systems are funded by the Canadian Government for Bidibidi Settlement while one is funded by Irish Government and will be set up in Moyo District.  In total, the four water systems will benefit over 30,000 people. World Vision has also managed to drill three boreholes at Maaji settlement and rehabilitated four others. 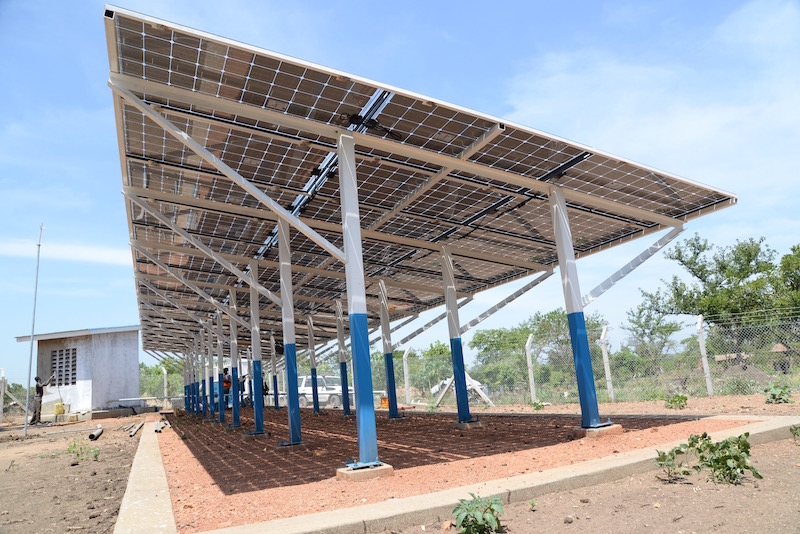