The Princess Salma Centre in Zarqa, Jordan was abuzz last month as 256 children (196 Syrians and 60 Jordanians) graduated from the Child Friendly Space programme which was formed out of a partnership between the centre, World Vision and the Canadian Department of Foreign Affairs, Trade and Development (DFTATD). The children have completed the programme’s five-month cycle, participating in activities that provide them psychosocial and tools to enable them to deal with their past and current struggles and to allow them to move forward daily.

The event, which included the exhibition of the children’s artwork, was attended by the Jordanian Minister of Culture, Lana Mamkegh, who was proud to see the children receive their certificates.

"World Vision has instilled hope, love and joy in our hearts,” said Lana Mamkegh. “While touring around the exhibition, we saw how the drawings started with gloom and sadness, and ended up with happiness and feeling of security."

Syrian children also performed a play about their lives as refugees in Jordan. It emphasized their fear of communicating with strangers as well as missing their neighbourhoods and loved ones. A chorus group sang national songs from Syria, accompanied by two children playing musical instruments. 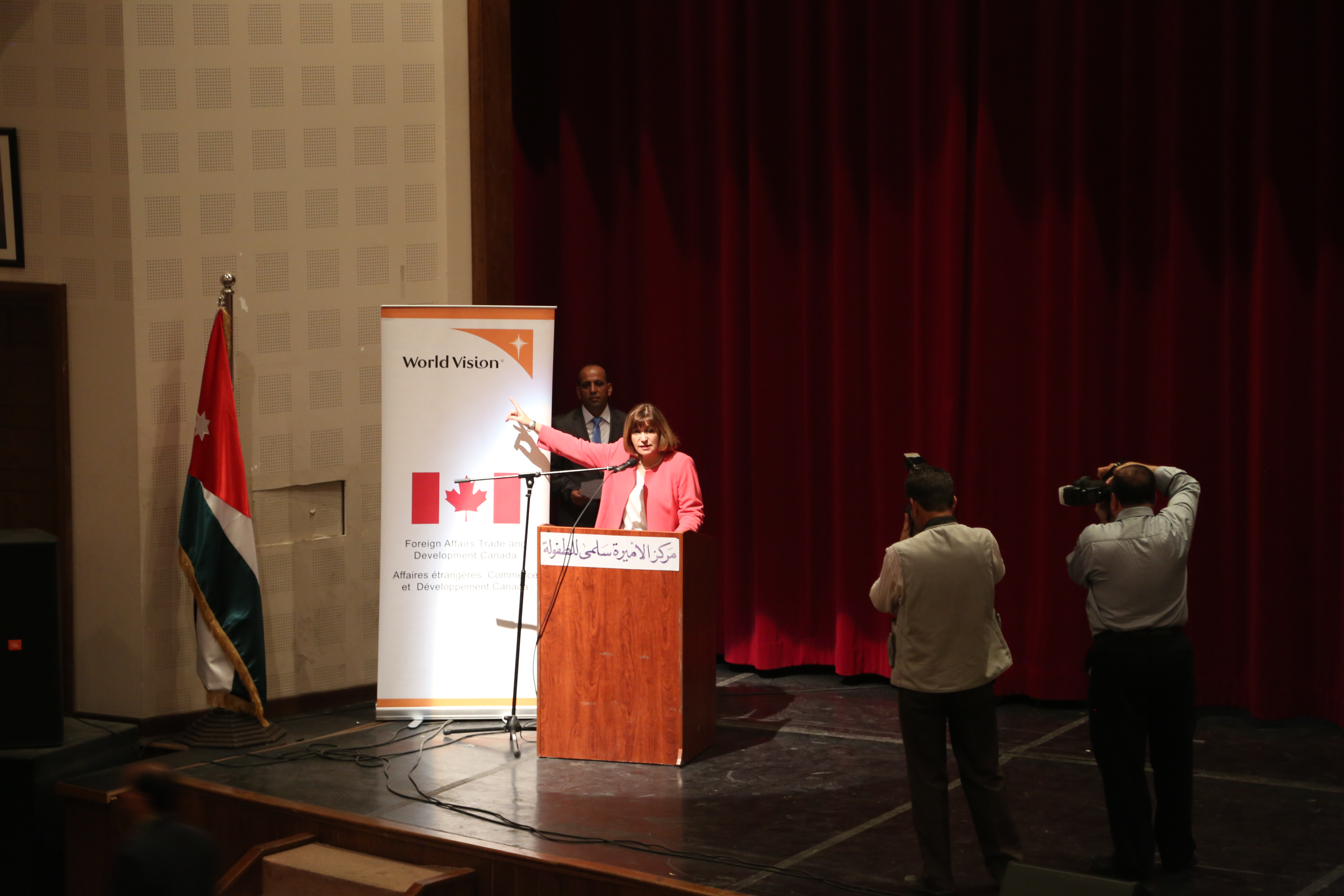 "We are grateful to all the people who work at Princess Salma Centre for helping to make a difference in the children’s lives,” said Steffen Horstmeier, World Vision’s emergency response manager for Jordan. “I would like to thank the Canadian government for providing the much-needed funds for this important program. But mostly, I need to thank the children,” he said.

Zuhoor, a 12-year-old Syrian girl who participated in the program and was enrolled in the earthenware section classes said: "I learned how to make pottery and colour it. I had a direct relationship with my teacher, Miss Nisreen whom I admire and I am going to miss a lot, along with Miss Khetam."

"Zuhoor's mental state has changed.” Adds Reyaf. “She began to play, to help with the house chores and to keep herself busy."

Zuhoor's mother, Reyaf, 32, was extremely pleased with the programme and its impact on her daughter. She wished that the programme could continue since she cannot afford to enroll her four children: Ammar, 14;  Rasha, 8; Abdel-Malek, 5, and Zuhoor in school. "Zuhoor's mental state has changed.” Adds Reyaf. “She began to play, to help with the house chores and to keep herself busy." She noted that because since her husband, Mohamed, 45, suffers from herniated disc in his back and cannot move and therefore cannot go to work. And, as a result, her oldest child, Ammar is always looking for work.  He earns 2 to 5 Jordanian Dinars (about $3-7 (USD)) maximum per day for whatever work he is able to find.

Additionally, Khetam, a social worker at the Child Friendly Space in Zarqa emphasized how this programme was able to help children get their childhoods back, how in the beginning the only subject of discussion that interested them was war and politics.

“I got so used to [being with] them,” she said.  “How can I let go of them now? Their hearts are attached to the centre and I am really concerned about the situation of each one of them who did not get the chance to go to school. Where will they end up now?” said Khetam.

Khetam went on to explain how she felt frustrated not to be able to do more to solve the ongoing problems faced by these children.  “I encouraged all parents to support their children’s education,” she said. “And, I explained that [education] is something that should never be abandoned.”

Child Friendly Spaces are one of World Vision’s emergency interventions to provide children with protected environments, in which they are able to participate in organized activities to play, socialize, learn and express themselves during the recovery process. They can improve children’s psychosocial well-being by strengthening and nurturing children’s cognitive, emotional, and social development as well as bring children and adults together to build protective community networks and mobilize communities to concentrate on the special needs of children in an emergency.

A total of 1,865 children (1,304 Syrian refugees and 561 Jordanian children from vulnerable families) have attended our DFATD-funded, Child Friendly Space programmes in different provinces in Jordan. Approximately 17 per cent of those children are not attending school primarily because of the schools’ limited capacities, as well as the lack of transportation from their house to the school.