For the past five years, the Syria conflict has resulted in more than two million children being out of school. The horrifying statistics show that in Syria, one in four schools has been destroyed, damaged or used to shelter displaced families and one-fifth of teachers have fled the country.

For those who have sought refuge in Lebanon, many didn’t know if their children would ever be able to receive an education or how he or she would cope with the difference in educational systems. After all, in Lebanon, children are enrolled in school at the age of 3 whereas in Syria children aren’t in school until the age of 6.

Deep within Lebanon’s Bar Elias where World Vision is hosting one of its Child-Friendly Spaces, you can hear the sounds of children laughing, dancing, singing and giggling from afar. The atmosphere is truly contagious. For many Syrian refugee children who have missed out on months or years of schooling, this has been a safe haven for them to regain a sense of normalcy. In an effort to better prepare Syrian refugee children to enter the Lebanese public school system at the age of 7, World Vision and Global Affairs Canada (GAC) have implemented a new digital “E-Learning programme” for children between the ages of 3 and 6. 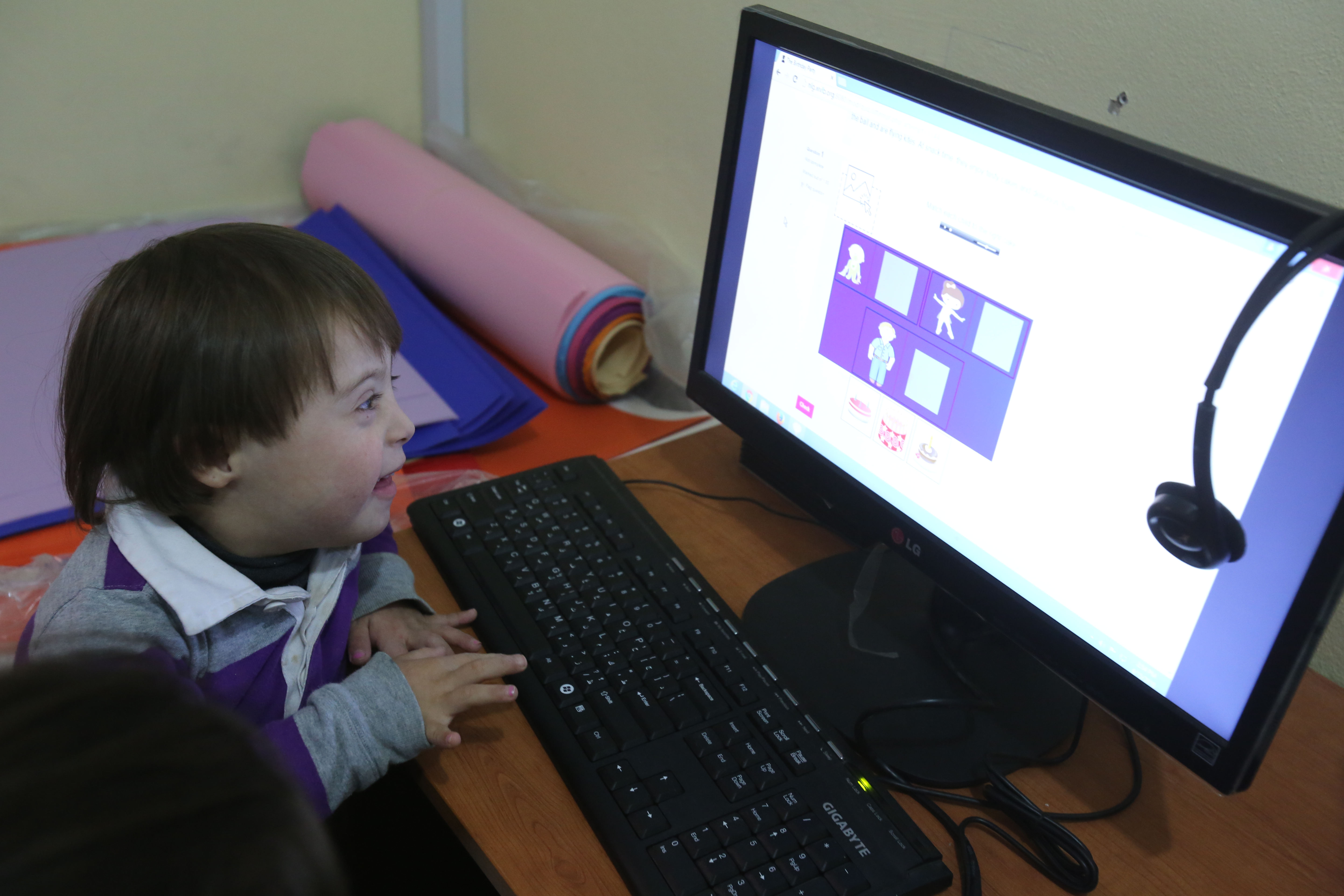 Walking into the classroom, which looks similar to a computer lab, the atmosphere is electric. Every child is glued to the computer trying to find ways to solve a puzzle or matching programme. The room is buzzing with energy. Surprisingly, not one child is looking distracted or sitting in a corner quietly.

“I like playing on the computer because I get to do colouring, matching and tracing!” says Omar, 5. “Colouring is the most fun but my favourite activity is matching two small circles with two big circles. I’m learning lots every day. I particularly like moving the mouse.” This is Omar’s first time using a computer. He’s very excited to be exploring the different computer functions and he isn’t the only one. 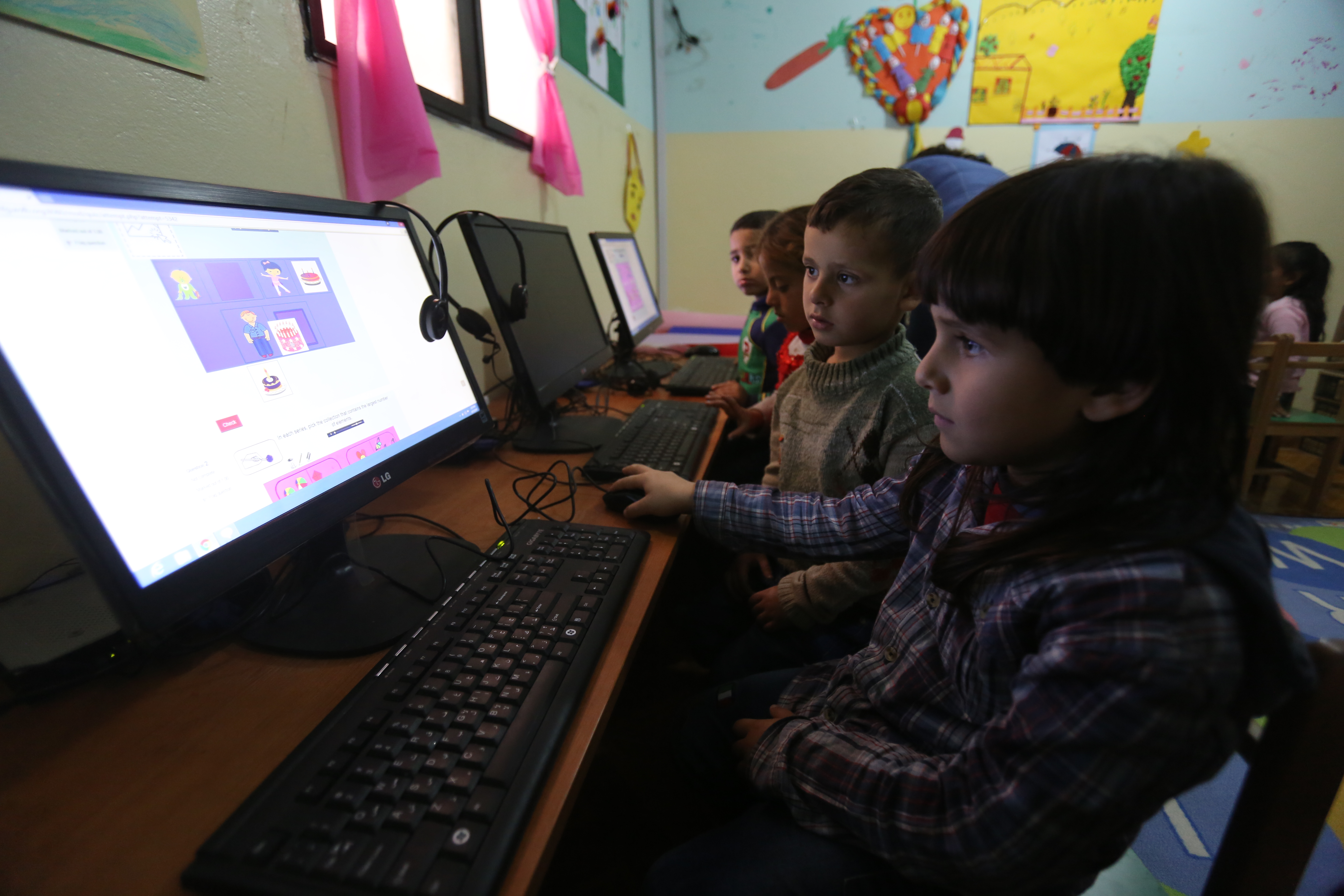 Rimas, also 5, has also never used a computer.  “When I’m in school, I feel happy because I like to play with computers. It’s my first time using a computer,” she says. “Today, we read the story King and Queen on the computer. We didn’t have a computer in Syria, so it’s been exciting. My favourite activity is learning the colours in English and Arabic, but I also like matching small animals with big animals.” 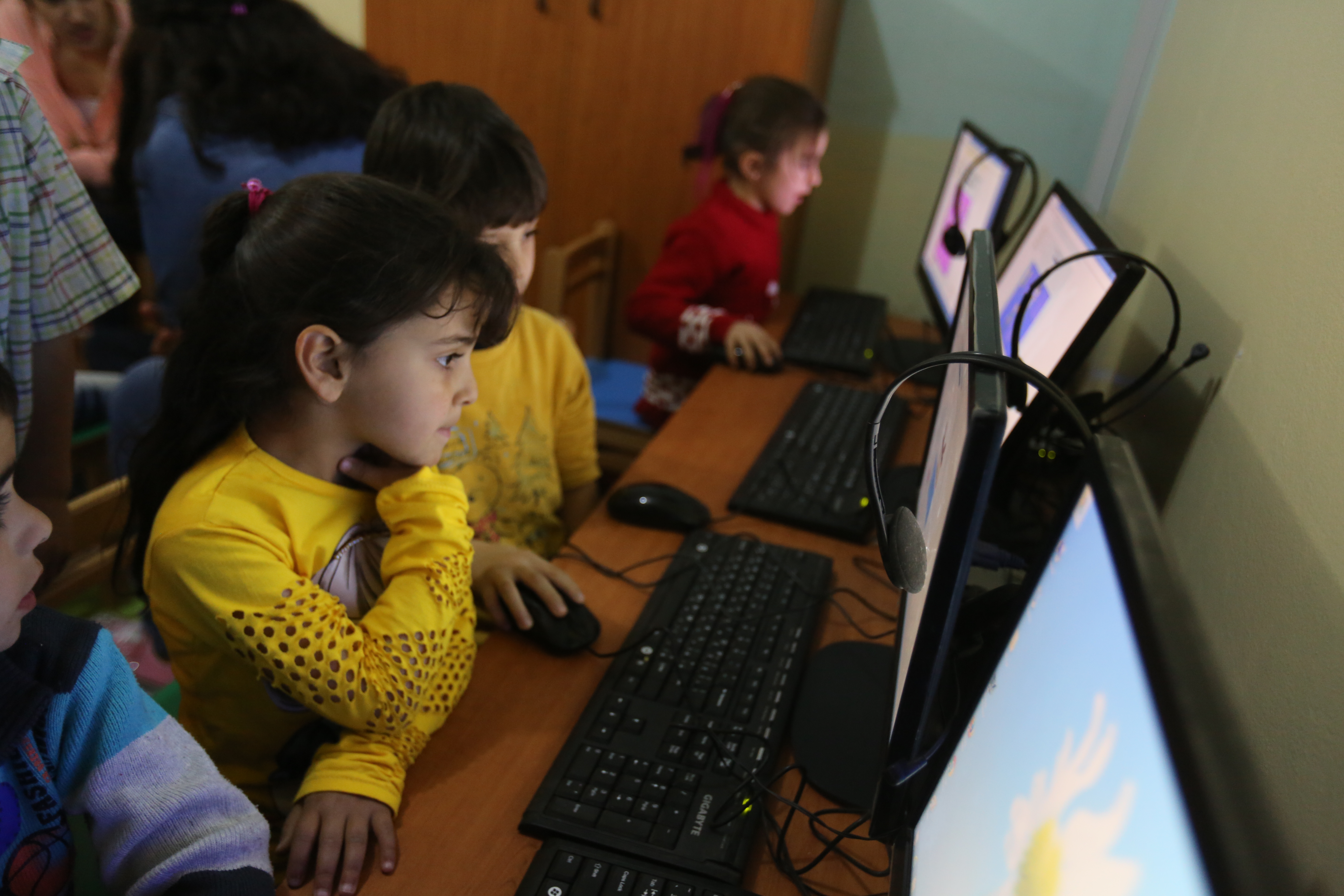 Sitting on the other side of the classroom, Ouday, also 5, never thought he’d see a computer again. “I used to play with computers in Syria where I learned that whenever I see the mouse, I would see an arrow shape…. I miss my computer in Syria,” he says. “When I got to the school and saw the computers, I was very excited because I could play and learn again. I used to paint using the paint programme and I’ve missed doing it. I would have been sad if there was no computer.” 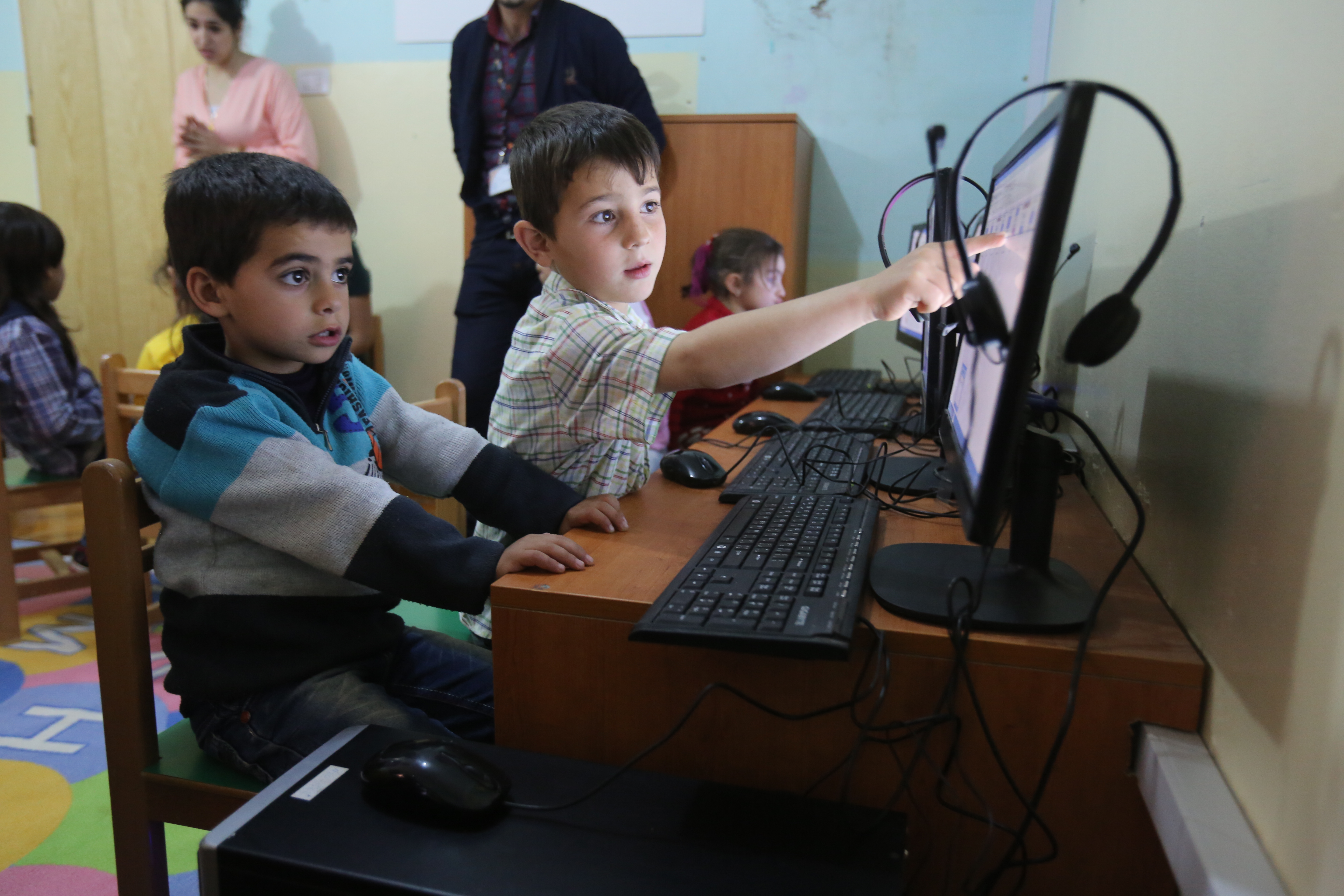 Watching these children beaming with joy and humming away, Rand and Mazen, classroom animators of the newly implemented E-Learning class, can’t help but smile.

Rand has been an animator for six years. “This is my first time teaching a computer class. The biggest difference about computers is that it’s much easier for me to teach various activities while the children are getting more excited. For some of the kids, it’s been hard getting them to concentrate, but here, everyone wants to learn,” she says. 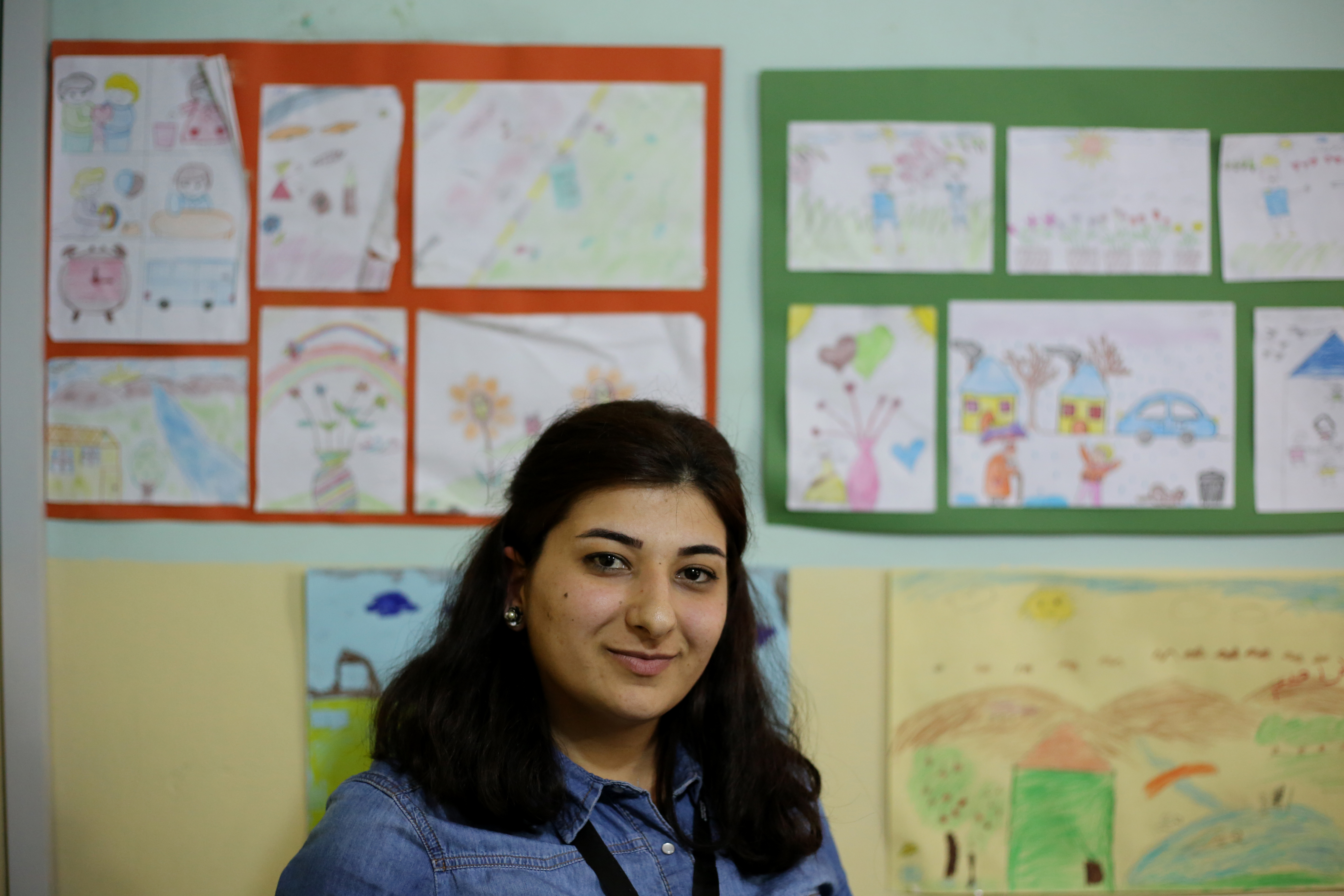 For many, having a computer lab may not seem like anything out of the ordinary. But, in Lebanon or in Syria, it’s uncommon to expose kids to computers as a teaching technique at this early age. “I’m surprised how effective they are in making these kids concentrate on doing activities,” adds Rand. “It’s a new way of teaching and getting the children involved. All the programmes are similar if not exactly the same as the Lebanese curriculum, which does help us prepare them better to enrol to public school.”

Unlike Rand, her colleague Mazen wasn’t initially thrilled with the idea of introducing computers to the classroom. “In the beginning, I was against the idea because I thought kids this age couldn’t use computers well. In Syria, it’s rare for kids to be using the computers at this age, especially three times a week…. Over time, however, it’s occurred to me that children between the ages 3 and 6 do actually retain the information from computers. It’s much more effective than regular learning because the information is right in front of them with a click of a button,” he says. “For example, when they move the mouse and see an arrow appearing on the screen, it may take them two weeks to learn that the mouse is the arrow but they would get it on their own! These activities help them develop their mental skills.” 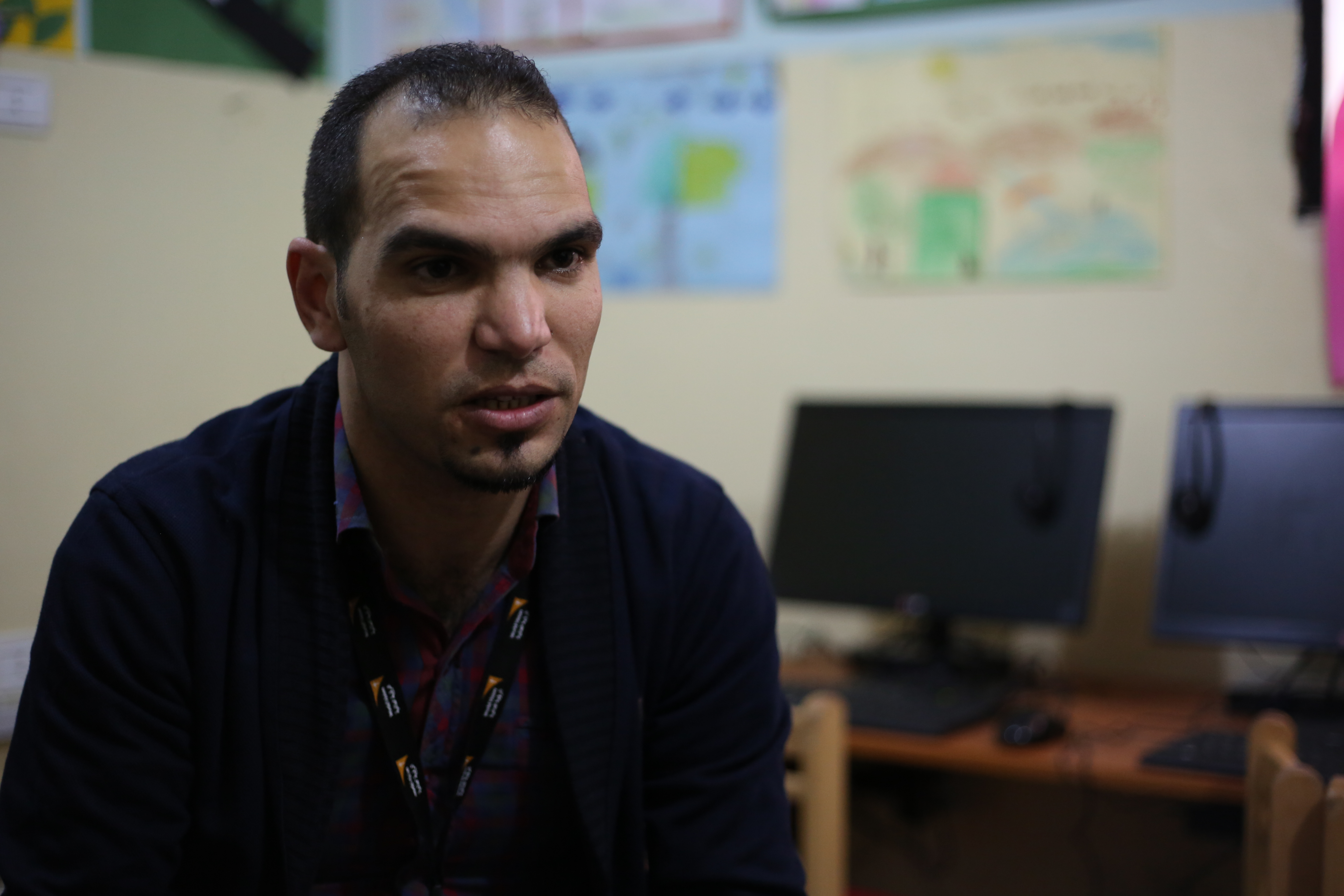 Mazen is now a firm believer that more schools should implement a similar E-Learning programmes, especially given the context of war and the things which some of these children have experienced. “I do think the combination of E-Learning and regular classes work best. By using computers, these children are spending time on useful things so they’re not wasting time on something else,” he adds.

Thanks to Global Affairs Canada, children like Ahmed, Rimas and Odey can be better equipped as they transition to the Lebanese education curriculum in public school. To date, over 220 children have used this platform. Recently, World Vision has received the endorsement from the Centre of Education Research and Development (CERD) within the Ministry of Education and Higher Education on the E-Learning programme. The CERD wish to disseminate the E-Learning platform to all public schools and to include its content into the Lebanese curriculum. This digitising plan will start soon.