I have experienced and seen so much evil at an early age but I choose to focus on the good. I have been hurt but I am not destroyed.

Just like the Joseph’s story in the Bible, I have been through the crucible so my life can show the hand of God. With the horrifying journey that I have been through, in the end I was rewarded. I learned a new language, lived in another country apart from my own, finished a college decree and traveled to four continents with family and friends.

But let’s start at the beginning.

It started with my mother’s bleak foreboding. “The Earth will be destroyed,” said my mother to her friends while in a conversation under the only Balanite tree standing near our house. At that time, I could not imagine how it could possibly happen. I was probably around eight or nine years old then. But I saw sadness in my mother’s eyes.

They were talking about the civil war that was brewing up in the northern part of Sudan. The president at the time, Jaafer Nimeri, had declared the dissolution of the southern autonomy and creation of Sudan as an Islamic state in 1983. It rendered the agreement he, himself, signed 11 years earlier obsolete. In the same year, the population in the south rose in protest against the north and formed Sudan People Liberation Army (SPLA).

The conflict would later become one of the world’s bloodiest, claiming an estimated 2.5 million lives.

We heard of violence building around big cities between various tribes in 1985. In Twic county (formerly Warrap), we heard from Ngok, our northern neighbors, about the alleged cattle rustling by another Messiriyah tribe. It was not the first time to hear of these incidents, but In the past, the raiders would only target cows grazing in the bush and would mostly flog, but never kill, the herders.

This time, cattle inside people homes were raided and stolen and the men killed. The women were beaten and children were abducted. We began to host displaced persons in our village and heard increasingly horrendous stories of violence. I was concerned but I did not think anybody would one day come to our home and kill people. I never thought it would be possible.

A few months later, rumors went around that some nomads were “lost” -- a term people used for those on the warpath. They were headed toward our village.

It was 2 a.m. and runners were spreading the message from house to house: it was time to go. My mother had to drag me with the other children to our safety. I woke up later in a nearby bush. Deng Akesh, one of our neighbors I knew well, was killed. That’s when the concept of “the Earth being destroyed” began to make sense to me. Lives in our part of the earth were being destroyed.

There were attacks almost every other month. Sometimes we would have to spend weeks or even months in our hiding place in the forest.

By 1986, it was no longer just the adults being killed but also the boys. The girls were being raped. That was when the armed group started to make its presence felt in the area.

The marauding tribe, although ill-trained, were well equipped and considered the “good guys” protecting us from our enemies. I remember my mother sharing our food with the drifters of the armed group even though they would also beat people if they did not cooperate with their demands. Although the civilians complained about their brutality, we preferred them being part of our people. We had no other option.

In 1985-1986, our cattle (which was our main livelihood) was raided by nomads. Deaths, rape, torture, and child abduction became rampant and the option of going to Bongo (where the military training of the people’s army was taking place), became more desirable. Every able man wanted to join the armed group and fight off the nomads. Everyone wanted to have a sweet vengeance and put our lives back in order.

They told us it would take a few days to walk to Bongo and then a few days of training before you’d get to have your own brand new AK47 and go back to your village. That was the desire of every man who was angry about what was happening.

In late 1986, there was a battle in Gogrial East that lasted all night. The enemies were defeated, which made every armed group’s soldier a hero in our land. Songs were composed honoring them. But the celebrations did not last long.

In early 1987, the enemy came for another attack. We escaped just in time to hide in the forest; we stayed there for about three weeks. When we returned, we had the greatest shock of our lives.

The whole village, except two houses, was burned to the ground. All our three tukuls (traditional huts) were gone. We had nowhere to sleep. For the first time, I experienced what it meant to be homeless. I grieved for what we lost. I told my mom that I was going to go to Bongo, but she warned me not to talk about it. Previously, she had refused my requests to go. She said I was too young. I was 7 years old when I started asking to go.

But this time I was resolute. I told her I would leave with or without her approval. One night I would just run -- following the hundreds of boys who used to pass by our village every few months going to Bongo. I was tired of seeing our livelihood and properties destroyed. I felt helpless and on the top of all that, young girls called us names, making fun of us for not joining the army and deliver the land from our then enemy.

I also thought things will not improve in the near future if we continue to ignore the problem. If we stay behind, we either get killed, raped, tortured or abducted. The least of these evils was enduring to hide in the mosquito-infested swamps hoping not to ever be spotted by the Marauders or armed groups.

When my mother realized that I could disappear any day without notice, she finally told me she would allow me to go but I should wait for her to get me prepared for the journey. Within few weeks, she got me what I needed – a pair of car tire sandals, Balanites tree seeds, roasted peanuts, mosquito nets and a new set of white linen.

Somewhere between July and Aug 1987, I left Anyangwuot for Bongo. Thousands of boys like me ended up walking 500 miles to get the biggest disappointment of our lives. The journey took us three months and we ended up in Ethiopia, a country we hardly knew.

Little did I know, it would be 20 years before I’d get to see my village or my mom again.

The journey included hunger, thirst, torture, sickness, beating and flogging and witnessing the mass death and burial in Panyido in Ethiopia – a story for another day. Then, we walked back into Pochalla in Sudan for another three weeks through the muddy forest.

I saw the mass drowning of fleeing people in Gilo River at Sudan-Ethiopian border. I witnessed the Pochalla bombing and hunger. We did another three-month walk to Nairus and again saw the horrors of the Kapoeta attack as we transited to Lokichoggio in Kenya.

In Kenya’s refugee camp, I met the World Vision team distributing food for those who were displaced, including refugees like me. Little did I know that someday I would be part of the organization doing my share to help other people. I studied inside the camp for another eight years, enduring the squalid refugee life. I was among the lost boys who were brought to the United States, living with an American family.

At age 27, I graduated from college majoring in Religious Studies with minor in International Development from Andrews University in Michigan, United States. I decided to go home in December 2007 because I knew that Southern Sudan was going to need me more than the United States.

I want to be a sign of hope and resilience for other children wanting peace. Looking back, I never thought something good would come of my life after desiring to become a child soldier, ending up as a refugee and being sent off to the US as a lost boy.

It was a long journey, but I found my way back.

Good things can come out of a harrowing journey; all we need is for the world to care enough to do something. 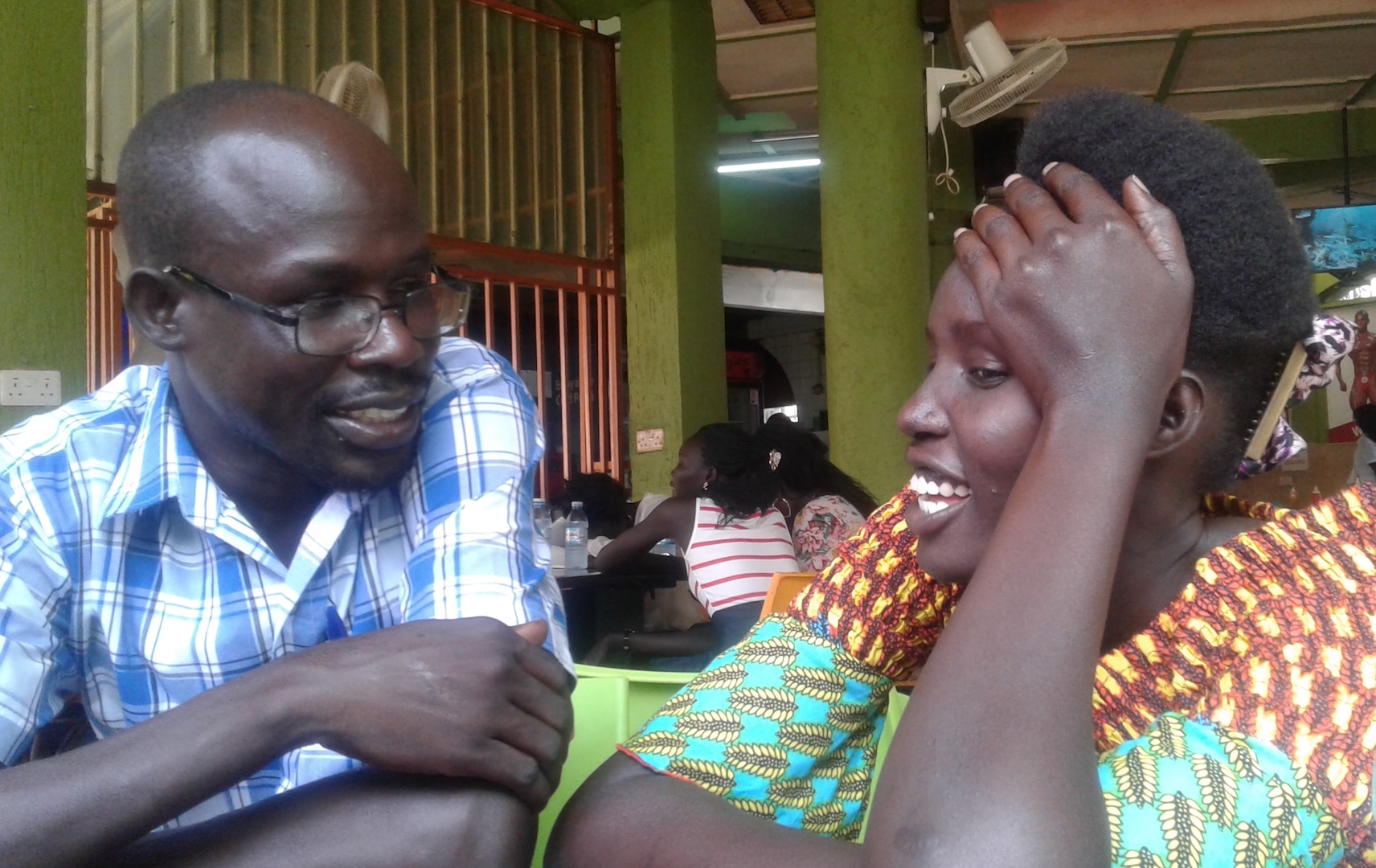 Above: Apart from meeting his family again after 20 years, Angelo found Angelina. They now have two children.