There’s a certain smell to the severely malnourished children in the hospital ward as the nurses gather them for the morning ‘appetite test.’ They’re trying to see if the assembled children have improved enough that they are able to eat again – since their arrival in hospital, the children have all just been on milk formula. The ward smells of illness, and somehow, decay, all with a faint whiff of peanut as well, from the plumpy nut the medical staff use for the appetite test. It’s a peanut based therapeutic food that will become these children’s diets for up to three months as their bodies regain weight and strength.

I’m seated across from Jean, 5. He’s collapsed himself down in the corridor and sat loosely gripping his package of plumpy, barely managing to nod as the nurse helps him to squeeze it out of the packet. There’s a certain regression that happens to severely malnourished children, they just about manage to move on their own, but like an exhausted sleepwalker struggling through jelly, staring blankly at the people and things around them.

Jean’s been at the hospital for eleven days now. He arrived weighing almost 9 kilograms, but much of that weight was due to the severe swelling that comes as a side effect of severe acute malnutrition. Jean now weighs just 7 kilos; his baby brother is larger than he is. 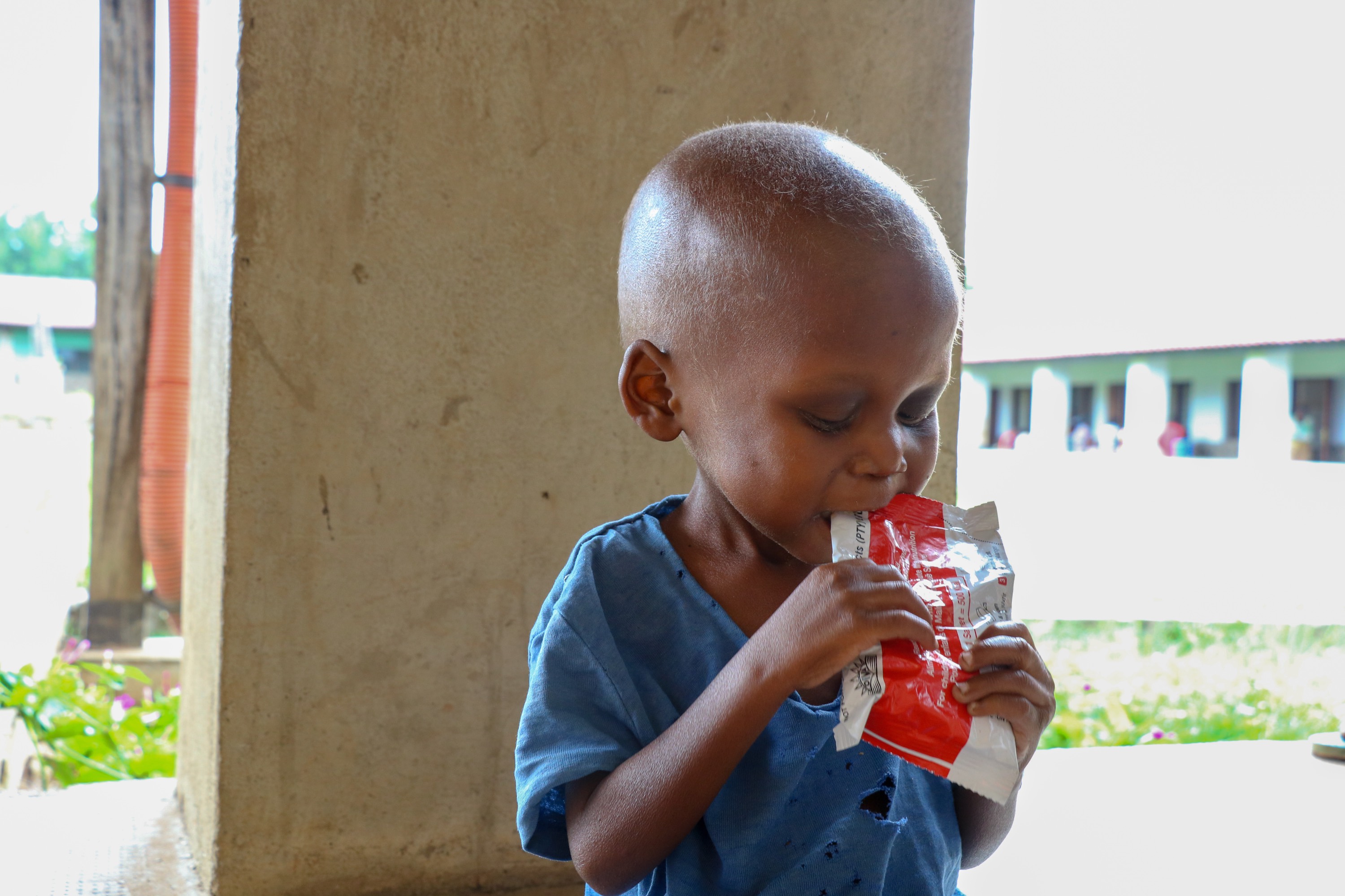 There are an estimated 400,000 children like Jean with severe malnutrition in the central Kasais region of the Democratic Republic of Congo[1]. Always poor, the region was racked with insecurity from 2016-2017 as a dispute over a local chieftaincy turned into a full-blown rebellion and counter militias formed to join the fighting. At its height, 1.4 million people fled their homes.

Monique, the head nurse at the hospital, tells me about militia and military confrontations in the hospital during that period. The staff and patients all ran to her office and hid, Monique tells me. She remembers the sound of bullets and militia running.

Today Monique is fighting the aftereffects of that conflict. Many families now eat just once a day, or sometimes once every other day, after missing multiple planting seasons while on the run. Last month she lost two children. They came too late, Monique tells me sadly.

For Jean, this is his third time receiving treatment. “He was seven months when it started,” his mum, Hélène, explains. “He got a fever, and then he started losing weight. And then the swellings and lesions started too.”

Hélène had been bringing Jean to the local health centre in the village where they live, over an hour’s drive away, but their stocks of medicines and food necessary to treat severe malnutrition had been intermittent, and sometimes non-existent. 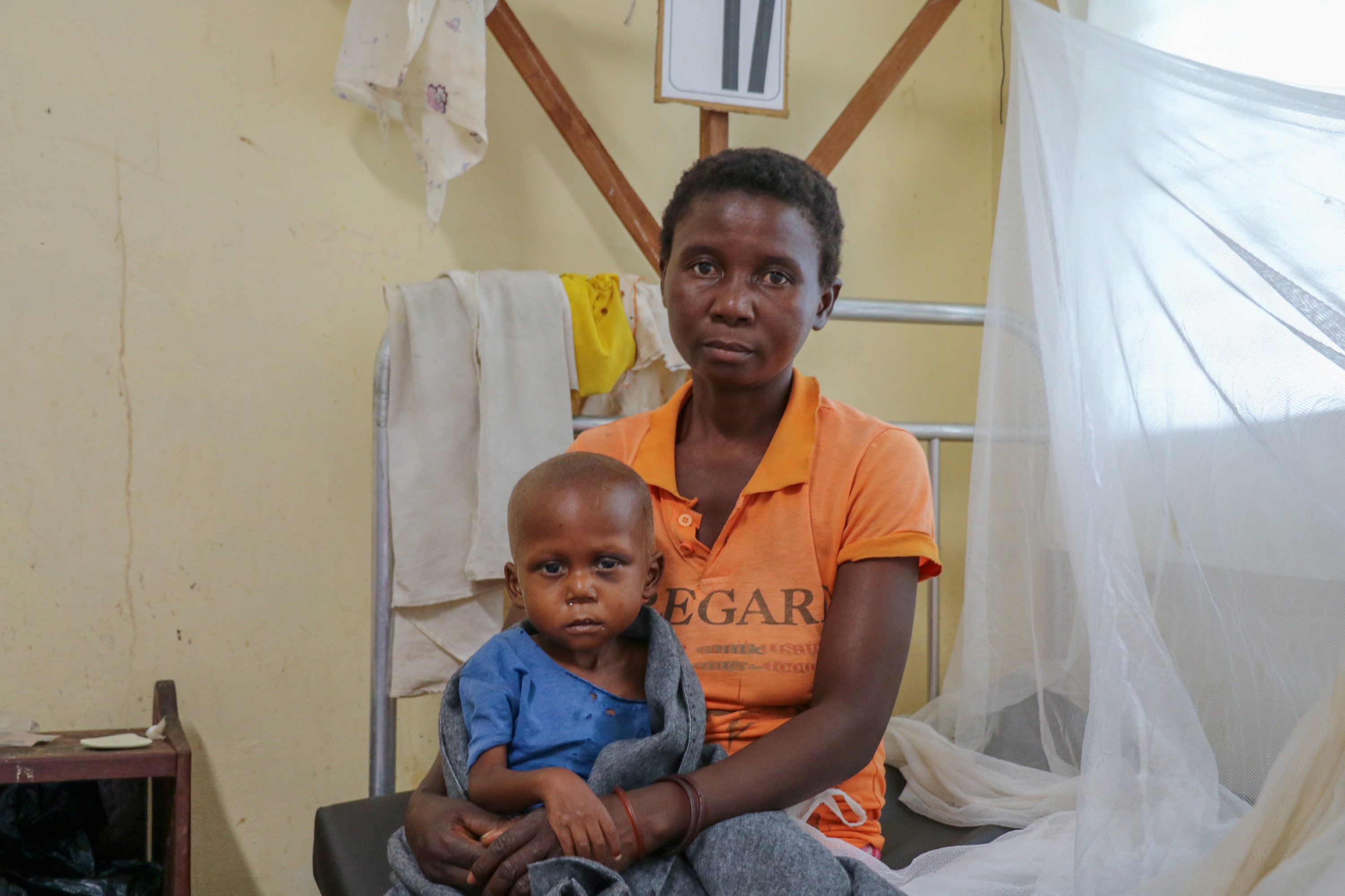 World Vision has been working to cobble together funding from UNICEF, World Food Programme, the Canadian government, and people in Germany and Hong Kong so we can treat moderate and acute malnutrition across Dibaya territory, where the conflict in Kasais first began in 2016. The stocks of plumpy finally arrived in mid-October, and now, Monique says, she feels confident she’ll be able to successfully treat any children who arrive at her hospital.

Hélène finally brought Jean to the hospital when the swellings started for the third time. Every time he left the health centre before, the symptoms would start again. This time, the medical team are determined he’ll be fully better before they send him home.

Unfortunately, that isn’t quite yet. He was given Vermax, an anti-parasite medication, as part of the treatment on Wednesday, and he’s been sick since. Today, he managed to get about halfway through the packet of plumpy before his tummy rebelled and he was ill. Hélène wipes him off and whisks him back to the ward, where despite the 30 degree heat she wraps him in a wool blanket and he sits, forlorn, in the centre of the bed.

It’s a long journey nursing Jean and the thousands of other children in this region back to health. But working with Monique, the other health staff in the territory, and all of our partners, we’re determined to nurse as many of the 800,000 back to health as possible.

At World Vision, we envision a world where every child has the opportunity for life in all its fullness. Good nutrition is an essential foundation for health and development, yet malnutrition continues to be the world’s most serious health problem and the single-biggest contributor to child mortality worldwide. In the Kasais, World Vision is working to treat acute malnutrition for Jean and other children, and also work with communities and parents to make sure no other child becomes malnourished in the future. World Vision has been working in Jean’s community since the end of 2017, delivering food supplies to help returning families get back on their feet and providing psychosocial support to children in addition to education, cash assistance and WASH projects.