The scenery is breathtaking. Deep gorges are surrounded by rock formations and tabletop mountains with steep edges. You don't know where to look first.

We are in the northern Ethiopian region of Tigray joined by Kira Vinke from the Potsdam Institute for Climate Impact Research and Guenther Nooke the Personal Representative of the German Chancellor for Africa to visit development projects from World Vision. The projects are funded by the Ministry of Foreign Affairs of the Netherlands through the World Agroforestry Centre (ICRAF).

Tigray is one of the driest regions in Ethiopia. In the past, but also today, the region has repeatedly been hit by catastrophic famines. People fled abroad or to other regions in Ethiopia as they did not see any opportunity for survival or a future for themselves and their families. Commonly they had to walk hundreds of kilometres before reaching an area where they could find water and food. Despite the beauty of the landscape, the mountains and valleys are completely dry. The hot air shimmers above the dry ground. Occasionally a bush or small tree emerges from the sand.

The farmer Alem Desta Gebre lives in a valley in a district 78 kilometres north of the regional capital Me'kele. "As a young man I went to Saudi Arabia for work as I saw no future here", explains the 56 year old. At the time only two farmers and their families lived in the valley. The harvest did not provide for more people. During his time in Saudi Arabia Gebre saved some money and decided to return to his home. However, the life of his family continued to be marked by deprivation. The harvest yields were hardly enough to feed his family. During the summer months heavy rainfalls commonly led to dangerous flooding and landslides. The little crop and vegetables which the soil produced was sometimes buried by the landslides or washed away by masses of water. Cows and goats grazing on the hills were washed into the depths of the valley. 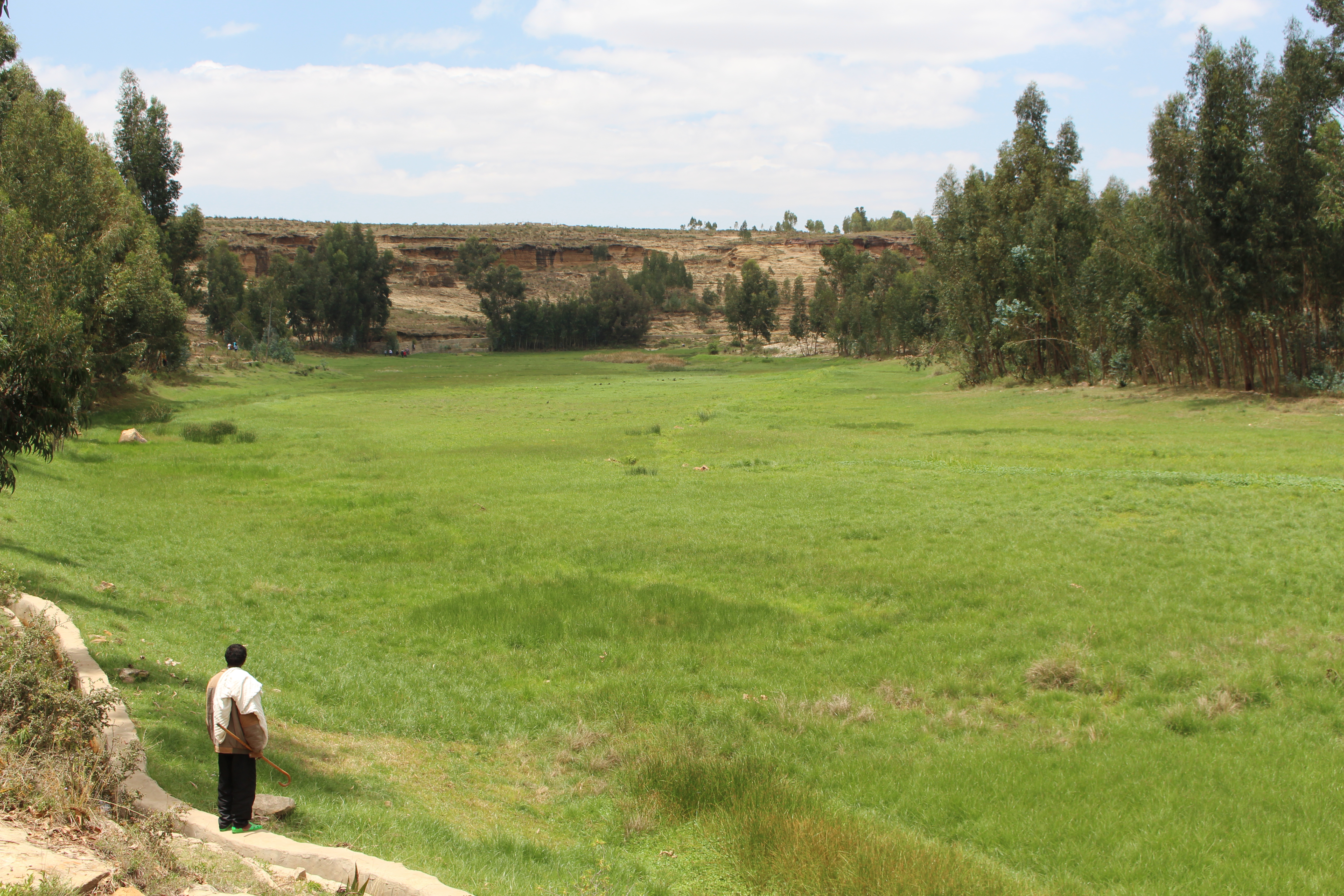 In April 2014 World Vision started its DryDev program in multiple areas of Tigray, including the valley in which Gebre lives. We climb down the hills into the valley and stop with surprise upon arrival. Where only a few years ago dry soil and sand dominated the landscape, green grass grows everywhere and the hills are covered in small trees. We observe a range of birds as they search the moist grass for insects and worms. Around 270 large truckloads of hay were harvested in the summer months and sold as animal feed on the market. This has additional significance in that severe drought was experienced in 2016. One truck can transport approximately 3 tons of animal feed. Today farmers protect the mountainsides to prevent goats or cows from grazing on the young tree shoots. The method used to regenerate the trees is called Farmer Managed Natural Regeneration (FMNR). FMNR is based on allowing existing roots systems of previously removed, indigenous trees to shoot again and redevelop into a tree. The method is cost effective and extremely quick. The benefit is that indigenous trees that are accustomed to the climatic conditions of the region return. Other biological interventions include planting of trees and grasses.

In the valley World Vision together with the community also implements a number of physical interventions to revegetate the hills and force rainwater to soak into the ground instead of running off immediately. Rainwater is systematically harvested and redirected into a dam. Terraces on the mountainsides significantly slow the speed of the rainwater pouring down from the mountains and facilitate trapping of silt. Contour ditches and soakage pits, allow the water to soak into the ground. Important nutrients collect behind the dams and in the basins. The rich soil can be used as natural fertiliser on farmland. With the help of water channels and pumps, the water is led to the farmlands and provides moisture for various crops including potatoes, carrots, tomatoes and cabbage.

As we continue walking around the corner and into the next valley we can see the dam and the water channels. Vast green pastures spread across the valley. Despite it being dry season and eight months since the last rain, the water at times is deep enough to soak our shoes.

Today, 132 farmers use the valley for growing grass, grain or vegetables. In the past only 3 hectares of land in the valley could be farmed, today it is 18.5 hectares. The future potential is 38 hectares. 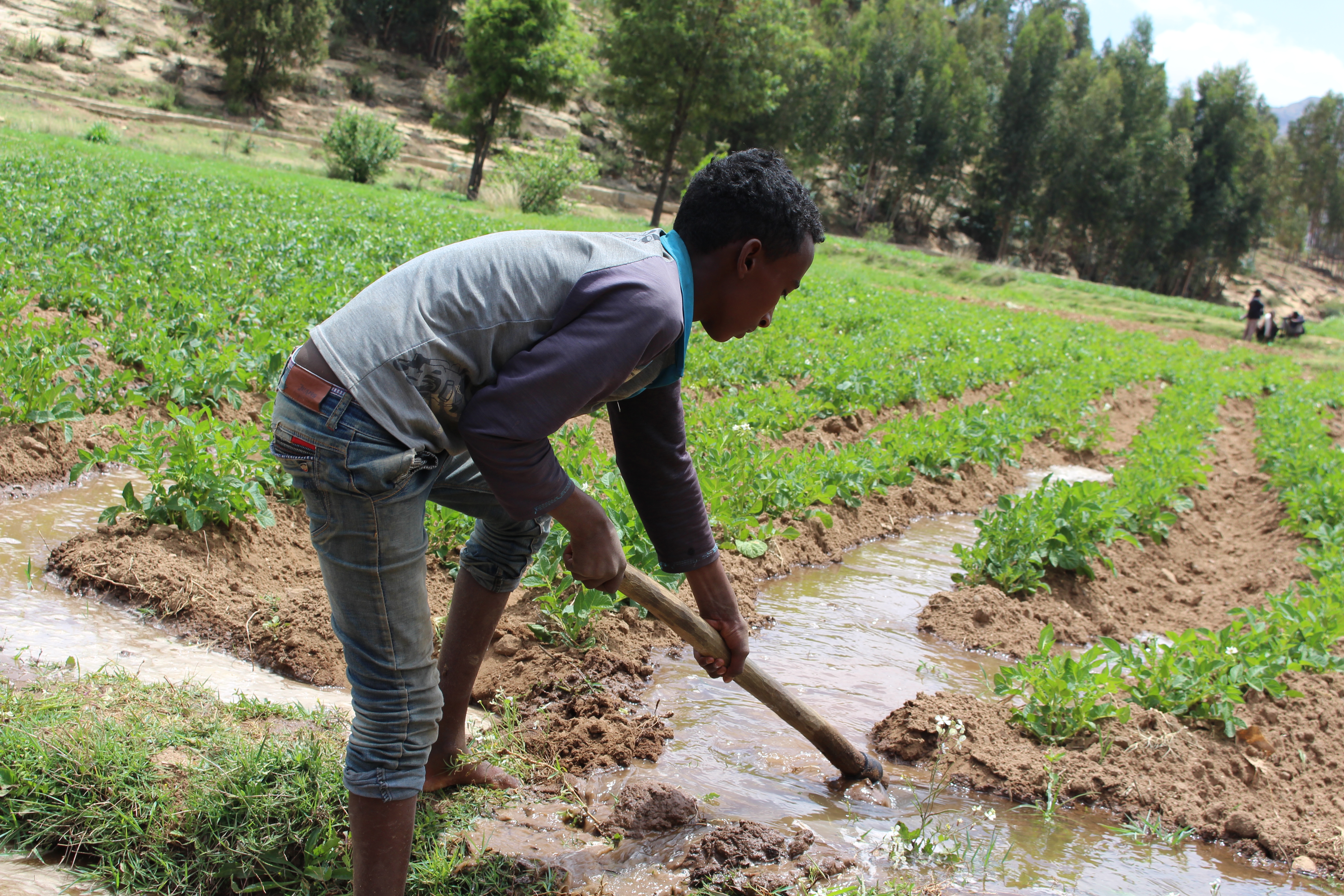 Gebre is no longer interested in migrating. "Today this is like Saudi Arabia to me" he emphasises. "My kids and I will not leave this valley again. We all do well here, so we can stay".

Only 300-400 years ago 60% of Ethiopia was covered in forests. About 10 years ago only 3% of forest remained, but much has been achieved in the last decade through restoration efforts and today more than 10% of Ethiopia has forest cover.

In Tigray alone, there are over 2000 valleys and gorges that could be regreened - a huge potential. Famines could be a phenomenon of the past. The Africa representative Günther Nooke is impressed and encourages the farmers at the end of our visit to continue with their efforts.

Kira Vinke also stresses the importance of creating fertile regions to ensure that people can remain in their homeland. In Tigray we visited a number of farmers who had fled as survival had become impossible in the area.  Some returned but many remained in their new places of home as they did not believe in a future in their homeland.

A green movement would be critical to ensure that dry regions around the world are reforested and regreened. Millions of children would not have to suffer from hunger and could have hope for the future, both for themselves and for the next generations.