When my first child was born four years ago, the hospital staff immediately handed me a form to fill out. It was really an afterthought for me. I was more concerned with spelling my son’s name correctly and how I would change a diaper than what the form actually meant. And yet, about 6 weeks later, a birth certificate arrived in the mail. It wasn’t until that certificate arrived that the government knew my son existed. This is a right I had always taken for granted and yet it is denied to millions of children around the world every year.

According to UNICEF, over 230 million children remain invisible to their government and unable to fully participate in their communities each year. They are denied education, health services, and at risk for exploitation, abuse and underage recruitment into armed forces. All because they do not have a simple piece of paper we take for granted – a birth certificate.

Birth registration is a foundation for the protection and well-being of children.

A new report recently released by World Vision finds many children are dying uncounted and invisible to the health services that could save their lives, because country governments and world leaders are failing to properly track vital data about children and their health. The World Vision report claims that the real number of unregistered children is likely to be much higher than the 230 million reported by UNICEF.

While the report highlights the need for increased access to healthcare and population data, the need for universal birth registration actually goes much deeper than that. World Vision points out several categories of children who are often completely off the radar to their governments. These include children who are not registered at birth due to their location, children from ethnic minorities, children with disabilities who are often hidden from their communities due to the shame and cultural stigma, orphaned and homeless children, displaced or refugee children, and children who are trafficked for sex or labour exploitation. Birth registration is a foundation for the protection and well-being of children.

Why does registration matter?

Lack of education. Check. Unable to open a bank account and needing money? Check. Someone in poor health and unable to get healthcare? Check. Someone separated from their family with no way to reunite them? Check. You can’t identify what age the girl is so she’s easier to marry? It goes on and on.

Without registration, it makes it that much harder to get a sick, exploited, abused or neglected child back on track.

Birth registration is a simple, yet effective solution for decreasing the vulnerability of children and increasing the effectiveness of foreign aid. The more governments that implement a streamlined birth registration system, the better they will be able to provide for their own citizens. The more governments provide for and support their citizens, the less money will be needed to support governments with weak, inefficient or non-existent safety nets for children.

Often, birth registration falls down the list of a country’s priorities. A birth certificate is so simple, it’s easy to be overlooked or to be allowed to languish. Sometimes all that’s needed is a nudge or support from other governments or organizations to help create a functioning, vibrant birth registration system. 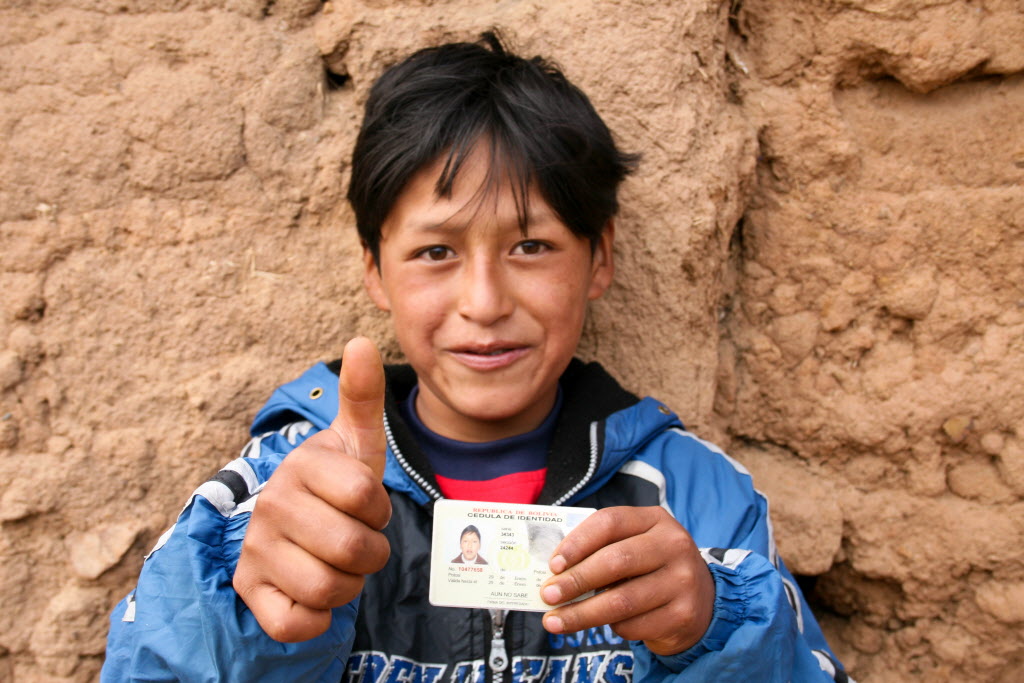 In Bolivia, Juan proudly shows his ID, provided to him by a joint effort between the government and WV to provide proper identification to children and adolescents.

This is not a secret. In the United States just last week, a number of leading anti-human trafficking organizations (including every member of the Alliance to End Slavery and Trafficking) sent a letter to Members of Congress highlighting the importance of birth registration in the fight against human trafficking.

Despite its name, the Girls Count Act (H.R. 3398) makes it U.S. policy to encourage other countries to ensure girls and boys of all ages are full participants in society, including requiring birth certificates and some type of identity card, and ensure children are able to access health, education and social services. These actions will help governments plan for the future, increase access to healthcare, prevent discrimination against girls, increase property rights, social security and inheritance rights for women and children, and ensure that girls and boys from poor households obtain equitable access to social programmes.

The Girls Count Act does not allocate new spending. These are programs where money has already been allocated. But it’s critical that amidst all the other efforts to protect children, this simple foundation that is the root cause for so much vulnerability is not overlooked. What’s more, these efforts will help strengthen and sustain the work World Vision and so many other organizations are doing around the world to ensure every child is counted, recognized and protected.

Just last week, we signed our son up for preschool. What was the first thing the school asked for (other than a cheque)? A copy of his birth certificate. It’s so simple, yet so vital and every child deserves to walk through the doors that a birth certificate can open.

More on this issue: