Healthy Timing and spacing of pregnancy

Healthy timing and spacing of pregnancy helps women and families make informed decisions about pregnancy-related healthy practises, including delaying first pregnancy and spacing or limiting subsequent pregnancies. Recent data show a compelling relationship between a child’s well-being and the length of time between the child’s birth and the birth of the next sibling. Infant and child death rates can be lowered by more than half if children are born 3–5 years apart, and spacing of pregnancy is an effective strategy for reducing maternal deaths. 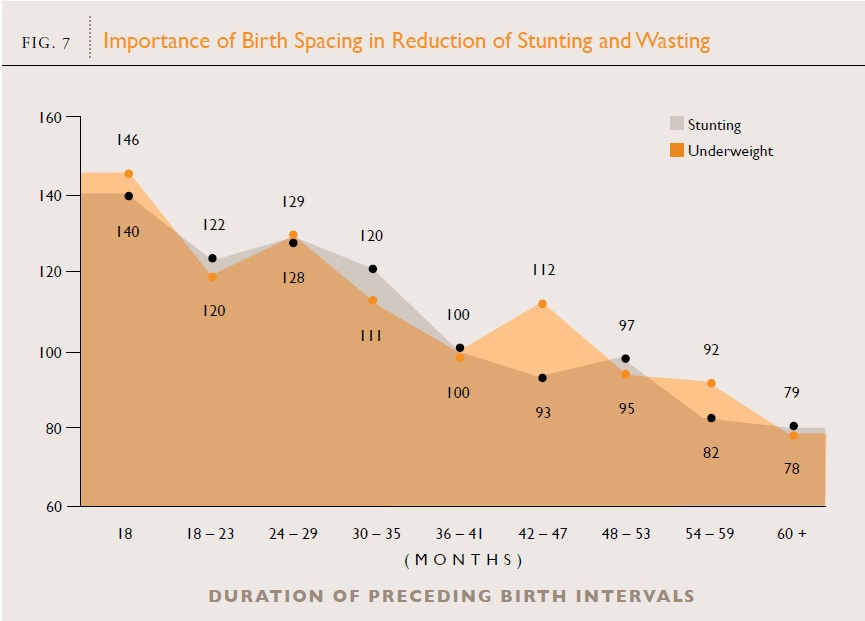 Figure 7 shows the important effect of birth spacing in reducing stunting and wasting among children. Research shows that children born less than 18 months apart (a birth-to-pregnancy interval of less than nine months) were 1.5 times more likely to be stunted or wasted than those born three years apart

The longer the birth-to pregnancy interval, the healthier the child (and the mother) will be. With HTSP, infants are at lower risk of being delivered stillborn, preterm or with a LbW and are at decreased risk of dying. All women are less likely to suffer from anaemia, eclampsia, miscarriage, induced abortion and death due to pregnancy and childbirth complications if they space births in this way.

What is healthy timing and spacing of pregnancies?

Healthy Timing and Spacing of Pregnancy (HTSP) is an intervention to help women and families make informed decisions to delay of first pregnancy and space and limit additional pregnancies for healthiest outcomes for the women, newborns, infants and children. The four most important HTSP messages are:

Is it safe for girls less than 18 years old to get pregnant?

There are very high risks of complications during pregnancy for girls under age 18. (This means that it’s really important for girls under 18 to have a skilled birth attendant to oversee childbirth and care for the mother and child after birth!)

Teenage girls are twice as likely to die in pregnancy and childbirth. If a girl is younger than 15 years old, she is five times more likely to die than someone between the ages of 18 and 34. She is also at highest risk of suffering severe damage to her body because she is not fully grown and her reproductive organs are not fully developed.nfants born to girls younger than 18 years old have a higher risk of dying before their first birthday. They are also more likely to be stunted and anemic.

Delaying the first pregnancy until a girl is at least 18 years old improves the chances that the mother and her baby will be healthy.

How can a teenage girl avoid becoming pregnant?

Complete sexual abstinence is the most effective way to avoid pregnancy and STIs/HIV. However, abstinence may be hard to practice consistently. Should young people become sexually active, they need to know about contraceptive methods, including condoms and emergency contraceptive pills. Young men need to share responsibility for protecting young women from unintended pregnancy and STIs/HIV. They should use condoms consistently and correctly to prevent STIs/HIV even when their partners are using another contraceptive method to prevent pregnancy.

Contraceptive methods can be used to delay the first pregnancy. All methods, except for sterilization, are safe for girls to use. When she is ready to become pregnant, she can simply stop using the method. Emergency Contraceptive Pills can prevent pregnancy when taken within 5 days of unprotected sex; that is, when no method was used, a method was used incorrectly or a method failed.

What about mothers older than 34 years old-is it safe for them to get pregnant?

No, the risk of the mother or the baby dying increases steadily after she turns 35. Older mothers should be encouraged to protect themselves from pregnancy by using a long-acting or permanent contraceptive method.

More questions and answers can be found in the