It is almost 11 o’clock in the morning and the number of children making their way to a Child Friendly Space in one of the rural communities in Kasai, Democratic Republic of Congo, quickly surges. Porridge will soon be shared and none of the children wants to lag.

“Malukhai Mama Alphonsine?” How are you Mama Alphonsine? A young girl, between 4 and 5 years, signals her arrival. Smiling, Alphonsine, a volunteer at the Child Friendly Space, waves at the girl as she proceeds to join her friends who are sitting on mats laid outside a small kitchen.

“Hunger, nothing else but hunger is what is propelling these children to come in such large numbers,” explains Alphonsine Kamvanya, who started working at the space in October 2017. 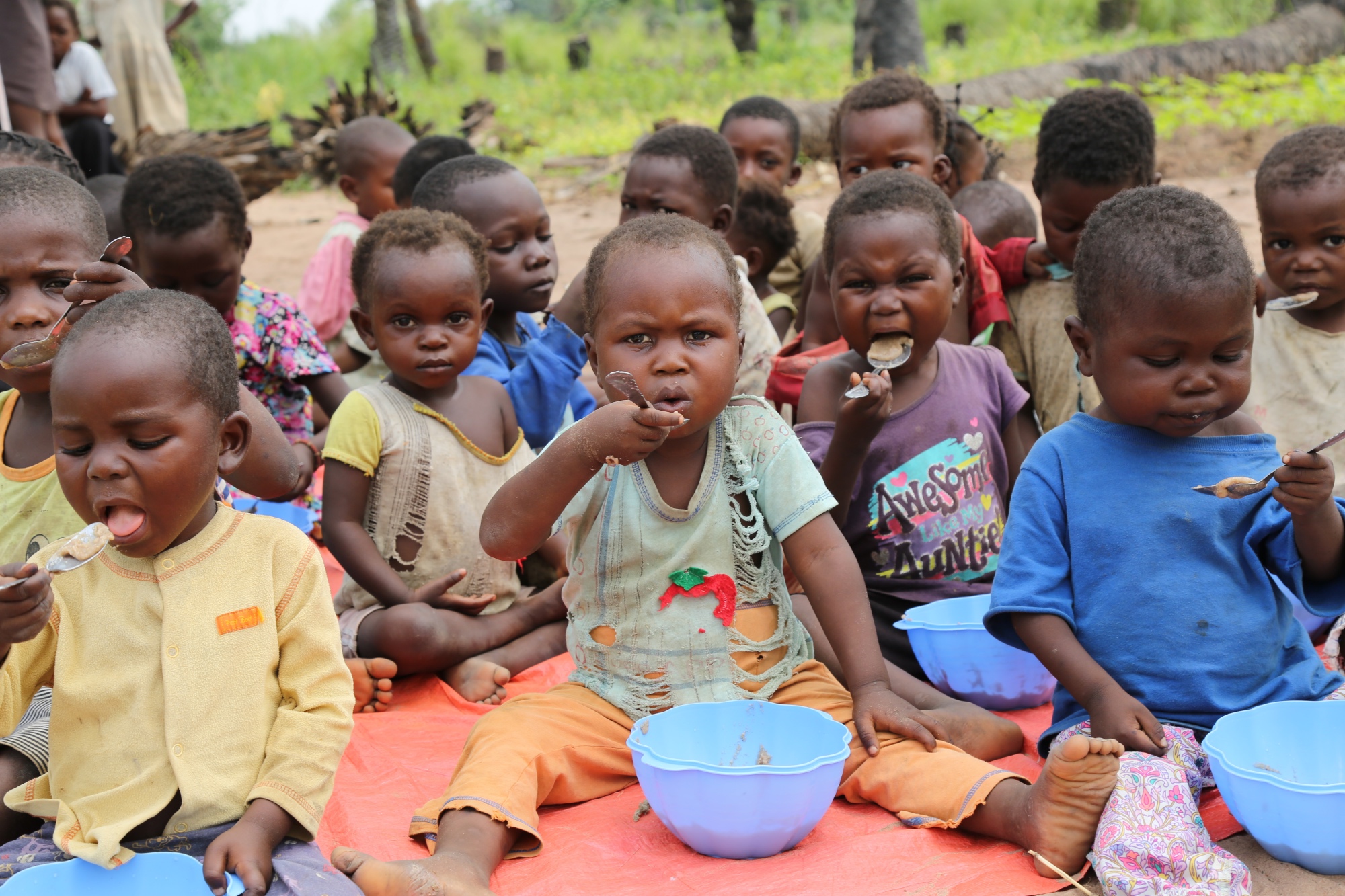 More than 100 children between the ages of two and 15 have arrived this morning and pockets of them keep coming. Among them are children who look thin and very weak; children with protruding bellies and wasted arms and legs. This is a sure sign of poor nutrition.

34-year-old Elizabeth Mbofo, who arrived a bit earlier with her two-year-old son, Fwamba, tells me that the hunger situation in the area is getting worse each day. Elizabeth says she is worried by the poor health of her child who risks dying from hunger.

“I am always concerned about the health of my child. It keeps deteriorating each day. Most of the time, he cries for food but I have nothing at home to offer him,” explains Elizabeth who for weeks now has been relying on the Child Friendly Space to get her child fed. “It pains me as a mother to see my son suffering.”

When the war broke out in Kasai, Elizabeth and her children fled into the bush. The family survived on water, wild fruits and leaves during the two months they spent hiding. 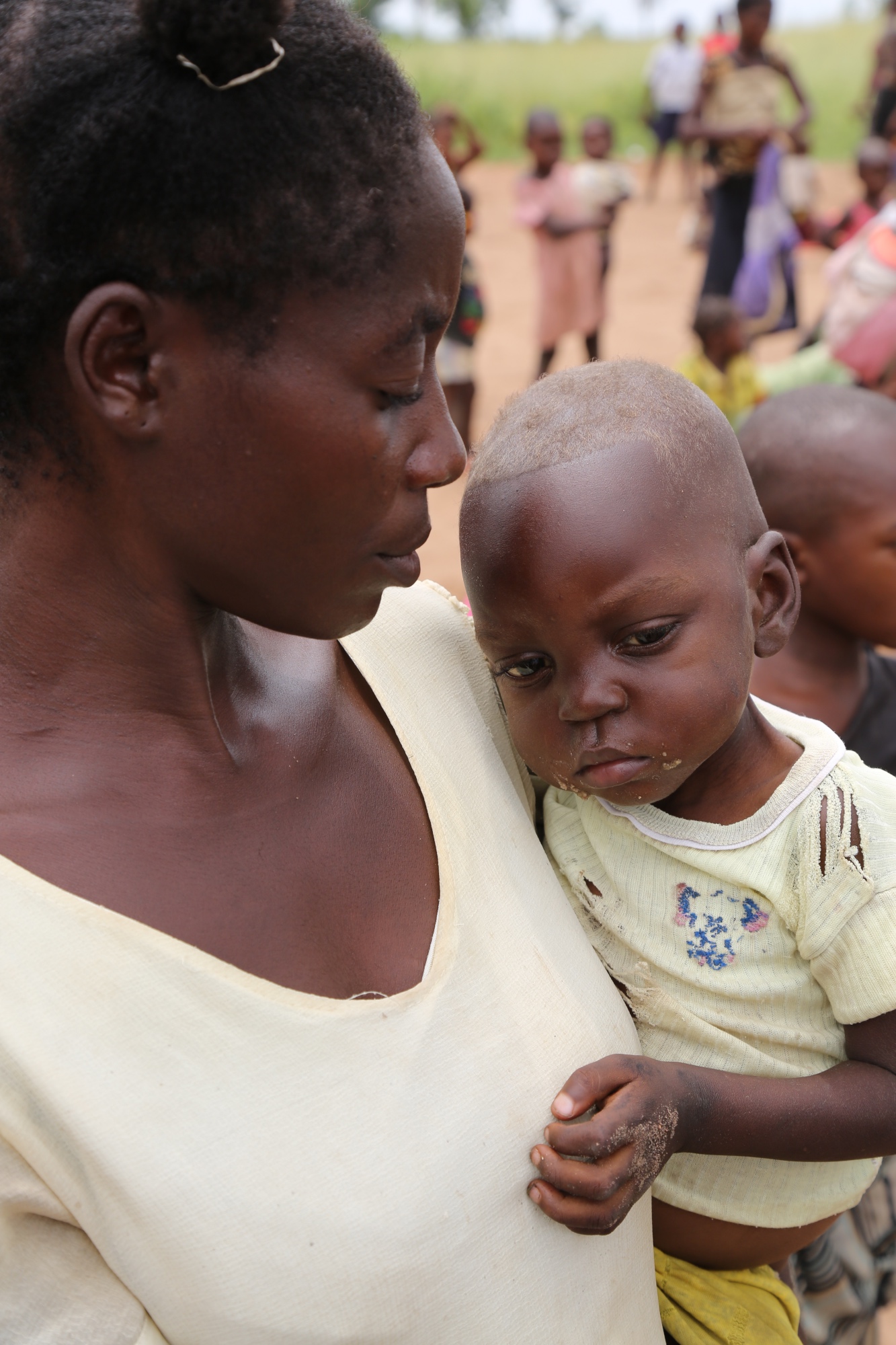 “Life was unbearable. We were bitten by mosquitoes and my children were getting sick often. It was not easy to find food,” explains Elizabeth, who also lost her husband in early 2017 and now takes care of their three children on her own.

Elizabeth and her children returned after peace came to their area. The family was shocked to discover that their house was completely looted and nothing was left. They had to start from scratch. “I lost everything and I don’t know where to start.”

As one way of helping children and families that have been affected by war, World Vision has been working with a local organisation called Cooperative Reveil de Kananga and community members in Kasai to set up six Child Friendly Spaces.

In response to high levels of malnutrition, some of the centres have also started providing porridge to the children.

“Through World Vision support, we are able to purchase flour which we use to cook porridge for the children. The porridge is highly nutritious as it contains soy beans, groundnuts and other micronutrients," Alphonsine explains.

“However, this centre alone receives more than 900 children every month. The resources we have struggle to keep up with this number."

In September 2017, World Vision provided training to 40 volunteers on how to run Child Friendly Spaces. These volunteers have started providing training to other community members.

“We are empowering community members to take charge of affairs regarding Child Friendly Spaces and all development activities taking place in their areas.

“However, the situation we are facing is that most of the community members are in the process of rebuilding and spend much of their time searching for food and also exploring means of acquiring income,” Davies Bishi, Manager for World Vision Kasai Response explains.

According to Bishi, families missed nearly three consecutive farming seasons as they were in the bush hiding and this is going to affect crop production and further worsen malnutrition challenges.

“Our worry is that more children will continue to suffer from malnutrition and food is not going to be available. There’s a need for food and financial aid to support the affected families,” Bishi explains.

A report issued by UNICEF in December 2017 indicates that 400,000 children under the age of five in Kasai region are suffering from severe malnutrition.

World Vision is working in partnership with the World Food Programme to distribute food and cash to families that have been affected by the conflict.