Pointen Nshaki decided to leave his teaching job to support children affected by war. In October 2017, he joined a local non-governmental organisation that operates in Kasai Central, called Cooperative Reveil de Kananga (CRKa). Much of his work involves visiting rural communities and interacting with children.

“When I visited the communities for the first time, most of the children that I met were just sitting idly in their homes and looked very lonely. I thought of coming up with an activity that would excite the children, bring them together and help them leave bad memories of war behind. Soccer is the first thing that came to my mind.”

Every Saturday morning, nearly 100 children, boys and girls, throng to one of the open grounds in Kamilombe, in Kasai region, to play soccer, sing, dance and receive psycho-social support.

At one corner of the ground stands Pointen. He yells at the top of his voice as he gives instructions to the children for the next game. His dream has materialized - the game of soccer is now becoming popular among the children.

“Children are always excited to come to this place. Apart from playing soccer, these children are also gaining other skills, like teamwork and confidence building.” 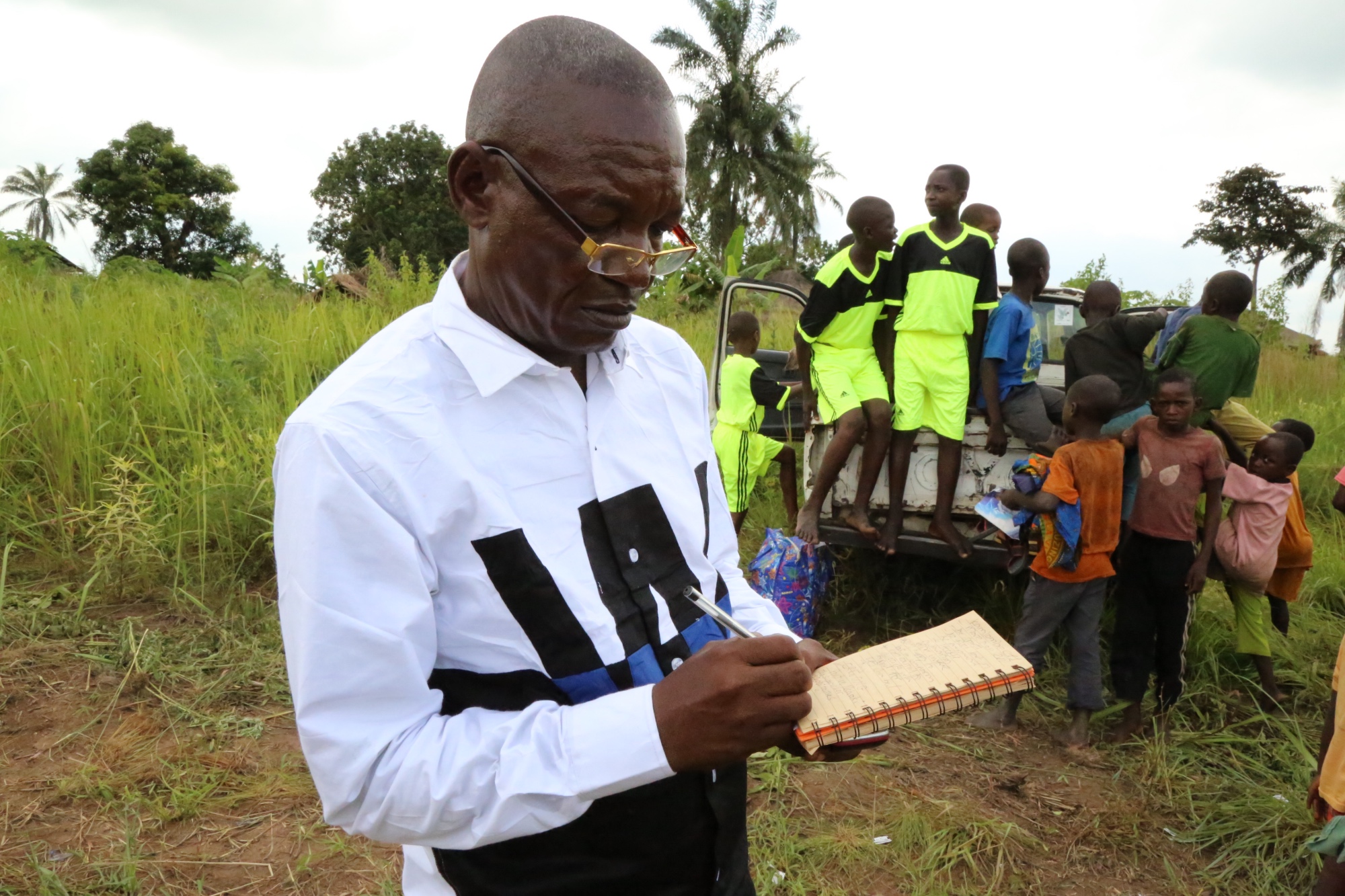 Pointen says that at the very beginning, most children were very shy and could not express themselves or speak in front of their friends. There was nothing like friendship and no one trusted each other. During the war, some children were recruited by armed groups and this is likely to be the reason why they were not trusting each other.

Musimbwa* is a 12-year-old boy who is in grade 6. When the war came in 2016, Musimbwa, his 17-year-old sister Danielle*, and their parents were sitting at the verandah of their house waiting for dinner.

“We heard sounds of guns coming from the nearby bush. My father grabbed me by the hand and started running. My mother and sister started following behind. The sounds of guns came close. After running for a short distance, my father and mother were shot. That is the last time I saw them,” Musimbwa explains.

Musimbwa and his sister continued to run until they met another family who was also running for cover.

“We joined the family and stayed with them for close to a month. We were hiding in the bush and life was hard. We were feeding on leaves and fruits.”

People started returning to their villages after hearing that the situation had calm down. Musimbwa and his sister managed to find their grandparents, who had also survived.

“I live with my grandparents. They are too old and cannot work. My sister does most of the work and I help her. We struggle to get food and most of the times we sleep without eating anything.”

Unlike his sister, who is always at home doing chores, Musimbwa goes to school. He dreams of becoming a Member of Parliament or government official, but his dreams faltered when he missed out of school for nearly a year due to the war.

Musimbwa is thankful for being introduced to the game of soccer. “I like to play soccer with my friends. Previously, during this time, I would be home doing nothing.”

Pointen uses his experiences from his teaching days to impart skills and share knowledge with the children.

“Apart from playing soccer, these children read, write and play other games. The extracurricular activities help them to have an in-depth understanding of the things they learn at school,” he explains.

There are a number of children from the soccer team who don’t attend school because they can't afford the school fees. Others don’t go to school because they are afraid that the war might return. Pointen says the sessions help the children to grasp some of the things their colleagues are learning at school. 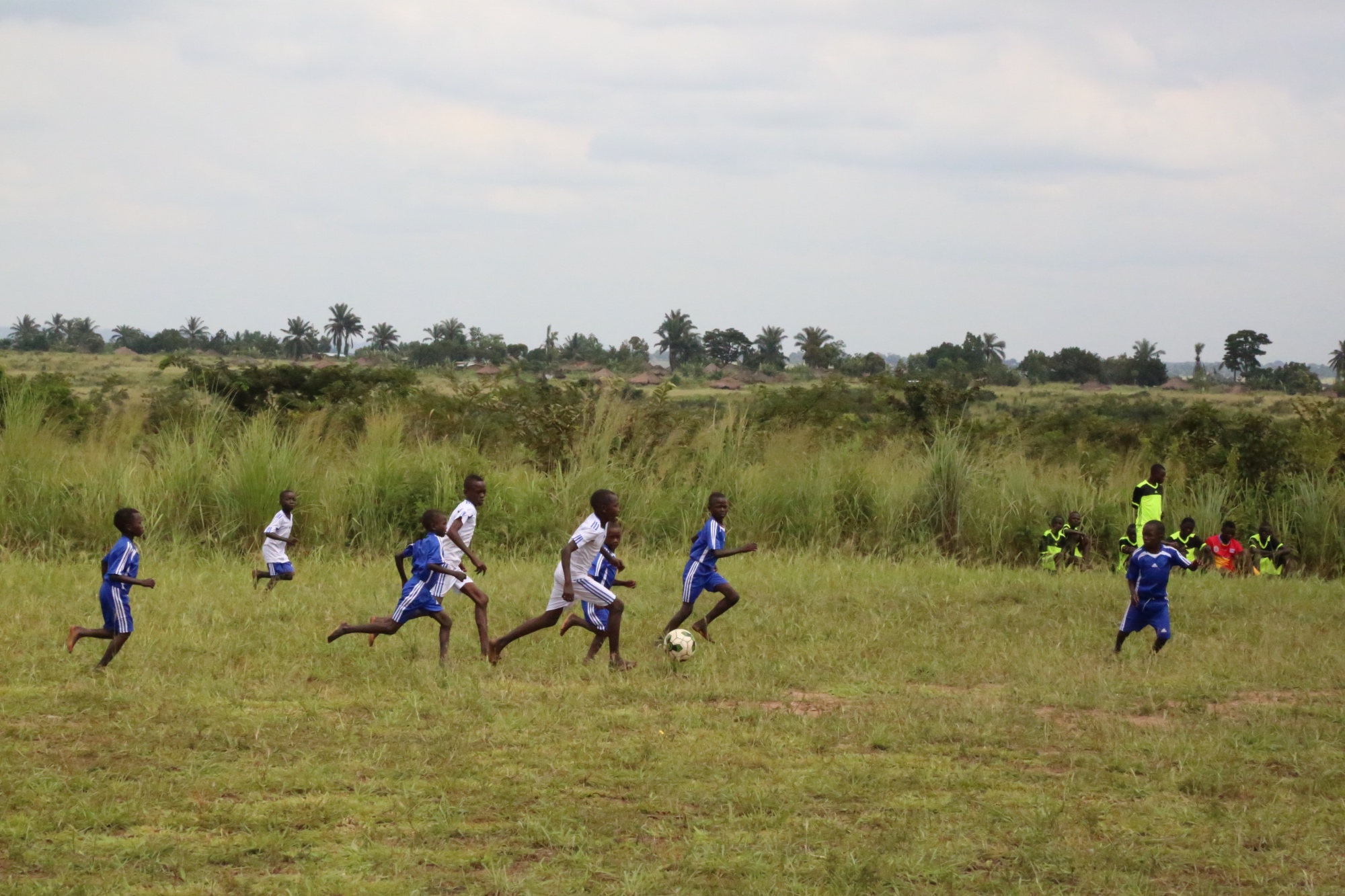 The outbreak of the conflict in Kasai, an area that was generally regarded as stable, has led to a mass movement of people, loss of property, disruption of education and has negatively impacted the lives of millions of children.

More that 1.6 million people have fled their homes since the war started in August 2016. Those who are returning are going to homes that have been destroyed and need urgent assistance finding food, shelter and psychosocial support.

“Even though the situation has normalized in some places, the need for aid in Kasai is huge. Children are at risk of dying from malnutrition. They need food. A lot of children have been negatively affected by war. They need psychosocial support,” Davies Bishi, World Vision Kasai Response explains.

World Vision has partnered with Cooperative Reveil de Kananga to construct six Child Friendly Spaces in Kasai. More than 7,000 children including Musimbwa will benefit from this project.

“We meet on an open ground. When the rains come, we stop whatever we are doing and run home. We are happy to have our own facility,” Musimbwa explains.

*Musimbwa and Danielle's names have been changed to protect their identities and keep them safe.