“I was born in 1999. My parents decided to move us out of Kraishte, the village where our family has its roots, due to security issues and to ensure that I would be born and taken care of in a better environment.  The hope was that we would move back to Kraishte when the situation became stable.  Unfortunately, it was impossible for us to return to Kraishte, so my family moved to Suhodoll/Suvi Do, a nearby village where we are currently living. Around the time when I was 3 years old we moved many times to cities in Serbia and Montenegro. I have never heard hateful words towards Albanians from my parents, in fact, my father’s best friend during and after the war was Albanian.

Even though the situation among Serbians and Albanians was not good, my parents taught me how to live without hate. However, the time of my upbringing taught me to live in fear. My childhood was unstable due to the situation we were living in, but as a child it felt like. While our peers lived freely and spent time outside, we sat in the house, waiting for the echo following a bomb, fearing stray bullets. My peers and I were young but we remember the shootings that interrupted our games. Somehow we were used to it. As a child you think that nothing bad will happen to you, because you are a child and you think that nothing bad can happen to children.

These experiences, as well as a large number of casualties, burned houses, churches, expelled and kidnapped people, and various conflicts, created a negative image in my eyes. I cannot say that I hated Albanian people, but I was scared. I thought that behind every corner was somebody who would make me their next victim, which would have ended my life for no reason. Even though my parents have never spoken badly for others, the environment I grew up in greatly influenced the formulation of my life. Songs, shows, movies, lyrics and paroles were an integral part of my life, all of which glorified hatred. I was a child and not mature enough to create my own opinion. I remembered my first visit to Lipljan, a city close to the village where I live. I was very scared and I saw people as enemies, until something unexpected happened. Somebody called my father, and during their conversation I understood that he was talking to the  Albanian man from the same place where my father comes from. They had a long conversation.  Even though I didn’t understand a single word, I saw friendship between them. They made me re-think everything. I then understood: it is important for us to build peace. I wanted to do something, but who was going to take into consideration the ideas of a child? My dream started to become a reality 7 years ago, when World Vision came to my village and established the Club for Peace which I had the chance to join. In the beginning I was skeptical about how it would function. I wondered, will I be able to meet and have Albanian friends? But I said to myself: if you don’t try you will not succeed! Then came different activities and new friendships, so fear quickly turned into fun and laughter. 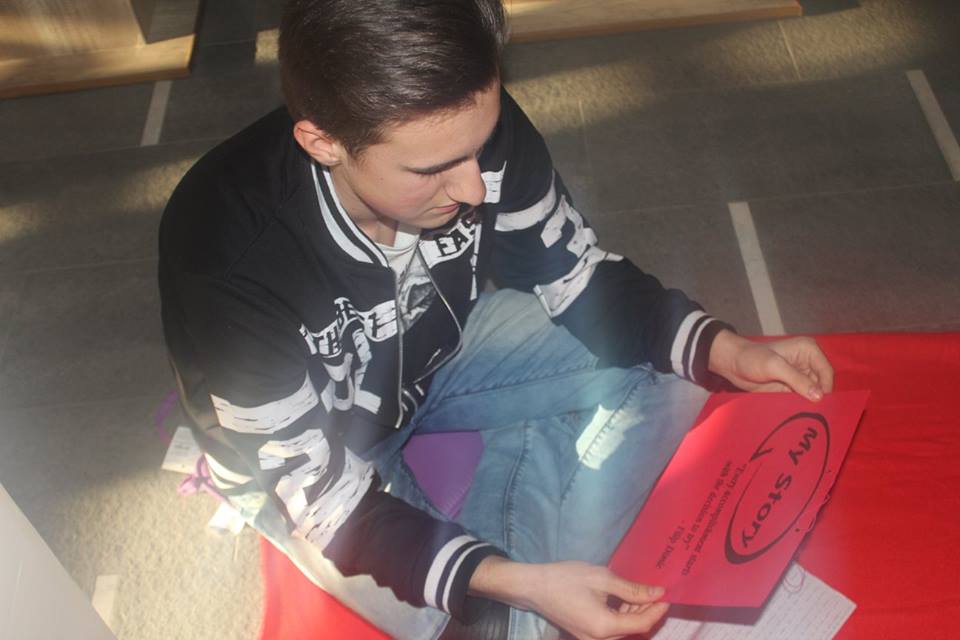 Thanks to the organization, I was able to go to the village of my ancestors for the first time. It was an incredible feeling. We forget about fear when we are together and look forward to new activities and the time that we spend together.

However, I must admit that sometimes I do have criticisms of my fellow Serbians, even though there are different opinions.

I am trying very hard to explain to my school friends that during the war both sides were hurt and that we need to look towards the future and be united to create a better future. By hating each other we cannot change anything.

My favorite activity is summer camp. At the camp we spend a lot of time together, we have fun, we learn a lot from the trainings, but also from each other. In the 7 years that I have been a member of the club we never had a bad situation or a conflict in which we have had to defend ourselves from other ethnic groups. These activities improved a lot ethnic relationships. Because of this I strongly believe that we should continue with our mission, to deal with the past for the purpose of creating a better future. I know that was not my fault or the fault of my Albanian friends, it was someone else. We are creators of our lives and we can choose to make our life good or bad. If we allow positive thoughts to come to us and embrace peace, we can live a full life. People often try to change the entire community, but people do not realize that the problem is within them, and that changes should start from each of us.

What I learned during World Vision activities is that not all people are the same. There are good and bad Serbs, and there are good and bad Albanians. Although we have two completely different nations, with different languages, cultures, customs, and habits, we are like a big family, and a family network is unbreakable. I feel that we are succeeding in our efforts.

It may seem that we as children cannot do much for peace in the world, but our position does not diminish our power.

I hope we can have the opportunity to continue what we are doing, and collect as many members as possible to achieve our great “Peace Brigade” which will build a better and safer environment filled with peace, love and joy for the new generation.” – says Filip.