Marita Adelino is not your typical 10-year-old. In a world where so many children want so much, she wants two things only—a best friend and a mosquito net. Marita is terrified of the tiny, wicked creatures that spread malaria, the disease that killed her best friend, Marta João, last year. Marita cared for her sick friend, cradling her head as it burned with fever, lifting cup after cup of cool water to Marta’s lips. But malaria won and now Marita is alone.

Amid the happy warble of learning at Muera Primary School in Mozambique’s Zambezia Province, Marita sits quietly at her desk. Headmaster Abrão Salimo Cassamo, 45, says she is a different girl since her friend died. He too, misses Marta João. “We really had high hopes for that child,” he says. “She would have changed something.” The headmaster says a student’s greatest challenge in Mozambique is malaria. “If we didn’t have malaria,” he says, “Children would get a better education. They wouldn’t miss classes. They would be getting better grades.”

Across Mozambique and southern Africa, the story is the same. Malaria kills one million people every year. It fills clinics with people who would be otherwise doing something productive—farming, teaching, nursing or learning. Sixty per cent of Mozambique’s hospital patients are there due to malaria. It is the biggest killer of children in Africa.

“Malaria is taking precious lives,” says her father, Manuel João, 43. “I have lost four children.” His first daughter, Aissa, died from malaria in 2007. Aissa died on the back of Manuel’s bicycle as he pedaled madly to get her to the hospital. “Rebeca lived for one year and five months. She died in 2009,” he says. “She was crying and her body was so hot.” Fatima died next. And then Marta, her father’s favourite.

“She was a very loveable person,” he says. “In our African families, the girls, although they are small, they are like mothers. They are so caring.” Marta was her parents’ helpmate. She fetched firewood and water and cared for her younger siblings.

“She was so alive,” he says. “She would say, ‘I want to be a teacher. I want to be a nurse.’” Marta’s absence leaves a palpable void. “I feel that something has left me,” says her father. “I have nothing to lean on.”

Marta was bitten in January 2011, the season when malaria is at its height in Mozambique. It is hot and it is wet. The country is prone to massive flooding. Water stands in pools and puddles. The mosquitoes breed and bite. They are everywhere. The female anopheles mosquito carries the parasite that causes malaria. While sucking her victims’ blood, she spreads the parasite which reaches the human liver within 30 minutes and begins to multiply. She is primarily nocturnal, so her feasting happens at night. If a family has no mosquito net, anyone can be her victim.

Malaria is a disease of poverty. An insecticide-treated net can prevent death but in Mozambique, a $4 net is out of reach with a national per capita income of 400 US dollars, a little more than a dollar a day. But farmers like Manuel earn far less than that. He cannot afford to buy a net. 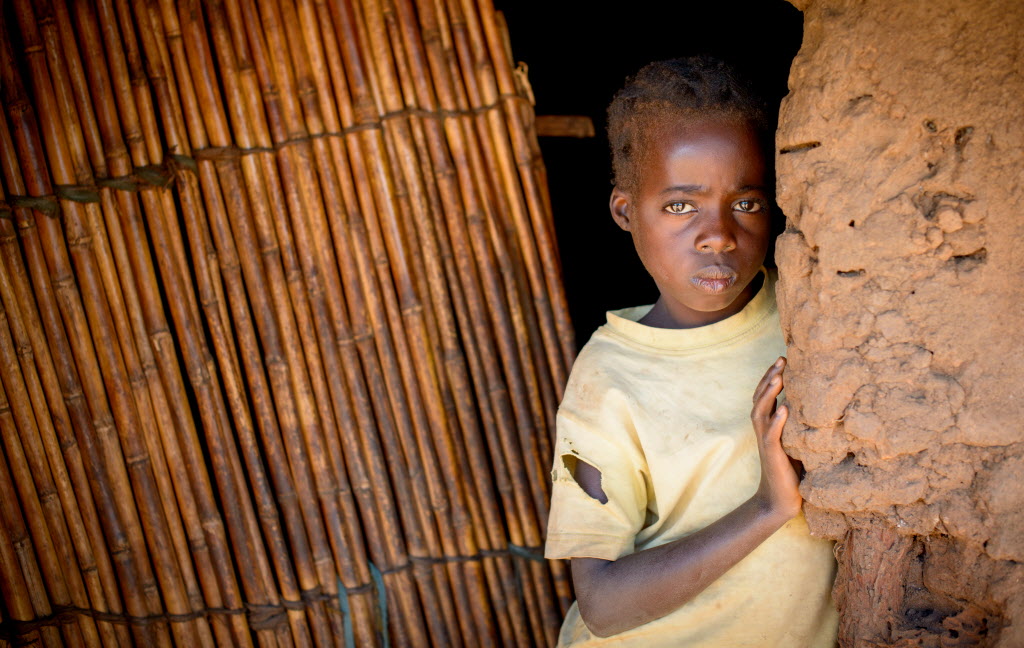 A subdued Marita is missing her friend. Photo by Jon Warren

“Look at my house, “he says. “It is in disrepair. Look at my fields. I couldn’t keep up.” He compares malaria to another item he cannot afford: a radio. “When you have a radio with a broken piece, it will not work. It is the same with malaria in a child. One piece of the family is not in place. It doesn’t work anymore. You have no power to go on. You are broken. You cannot progress.”

Marta had received a mosquito net but it came too late—several months after she had contracted the disease. When death came, her parents followed tradition and buried her with all her earthly possessions including the mosquito net. They wrapped their once bright, vibrant daughter in the blue gossamer threads and laid her in the earth.

Marita did not go to Marta’s funeral. Instead, she fell apart. “For Marita, it has been very hard,” says her father, Luis Adelino, 45. “She is very quiet, thinking of her friend. When she gets sick, she begins to cry, thinking she is going the same way.”

Luis explains how malaria makes poverty worse. “When someone has malaria,” he says, “They can’t go to the field because they are sick.” And when a child is sick, a parent must take them to the clinic or hospital.

North of Zambezia in Nampula Province, malaria, mosquitoes, death and sickness could not be farther from Delfina Candido’s mind. There is too much for the third grader to do today with exams at school and then washing her clothes for choir practice in the afternoon.

The eight-year-old is sitting on her bed with her two best friends Angelina and Boassane. All three girls swing their feet in rhythm, Delfina’s right and left feet touching the toes of a friend on either side. They sit under a canopy of mosquito netting, provided last year by World Vision.

“After church,” Delfina says, “We will play all day long until we come back home.” She and her friends are avid jump ropers. Perhaps Angelina and Boassane will stay over. All three girls can fit under the mosquito net. 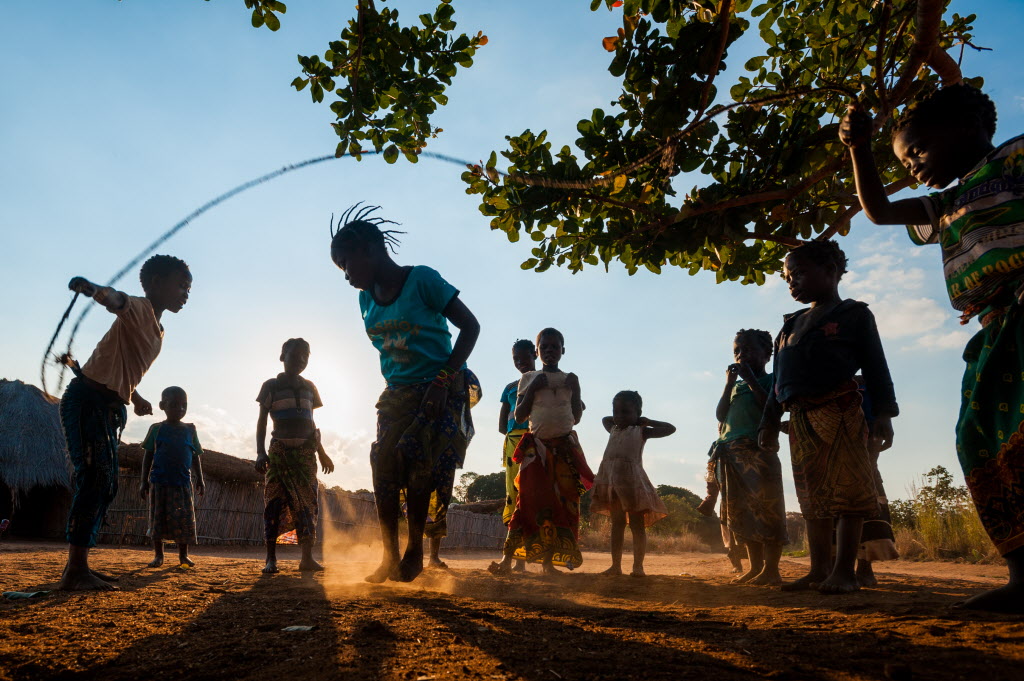 Delfina and friends play jump rope outside her home. Photo by Jon Warren

Outside, Delfina’s father, Eduardo, 35, thumbs through his daughter’s Portuguese workbook, mouthing the words out loud. Eduardo grew up during the civil war in Mozambique and missed out on a proper education. “Since the war there have been many changes,” he says. “[When I arrived here] there were just bushes. There were no homes. No roads. Now there are schools. There are boreholes and hospitals.”

Twenty years ago, Eduardo helped build the road in this community, Namakai. World Vision gave men like Eduardo cash to work on roads and distributed seeds and tools so they could begin to farm again.

Today Eduardo’s home shows the progress he has made. It is immaculate. The yard is swept baseball-diamond clean, the brush strokes still visible. Two houses and a covered area for relaxing and gathering around a table are enclosed by a tall fence. Eduardo recently built the second house which better accommodates his family of five; his wife, Aida, Delfina, 8, Delsia, 6, and the baby Graciosa, 2.

“Since we got the nets, we no longer get malaria,” he says. “[Before] it was constant. It moved from one person to another. It never stopped.” But when World Vision provided mosquito nets and training on how to use them to the family, Eduardo’s family stopped getting sick. With no limits on his capacity to farm, his profits from rice, cassava, and peanuts skyrocketed.

“After the nets we increased our fields,” he says. Before the nets, he could sell 10 bags of peanuts at 50 US dollars per bag. After the nets were installed, his yield increased to 15 bags of peanuts. In peanuts alone, Eduardo earned an extra 250 dollars last year. “Then we built a house,” he says. The new house is big enough for two beds, one Eduardo purchased with his peanut crop profits. Each bed is covered by a net. “The children slept on mats before,” he says.

“One thing we do is mobilise people to tell them how to prevent malaria,” he says. Community awareness is critical to the success of mosquito net distributions. “We make sure there isn’t standing water,” he says. They encourage latrines and filling in puddles where mosquitos breed. “There were demonstrations on how to hang the nets,” he says, and spot checks to make sure families are using them correctly.

Eduardo’s girls don’t get sick anymore. Delfina is doing beautifully at nearby Naterre Primary School. In fact, grades have gone up for everyone since the nets were distributed to every household. 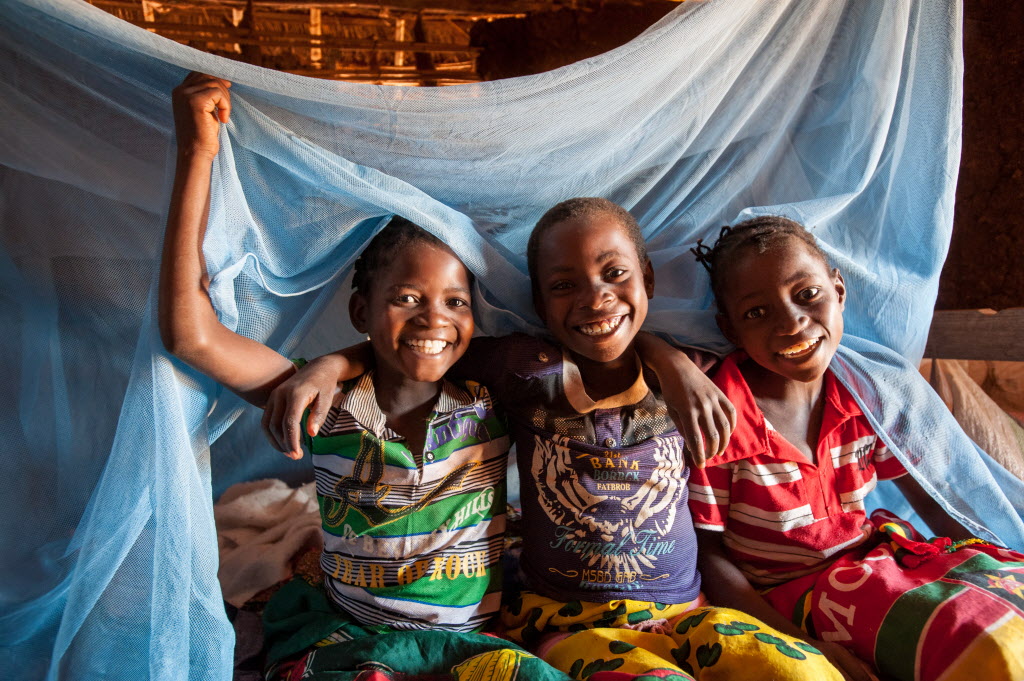 Delfina and friends underneath their mosquito net. Photo by Jon Warren

Sitting under a cashew tree, thumbing through the grade book Alfredo Francisco, the headmaster, muses about the psychological effects of malaria on his students. “Maybe your best friend is not in school so you’re worried about her. You’re not listening,” he says. That doesn’t happen anymore. The teachers no longer contract malaria either. Before the nets were distributed, if a teacher became sick, class was dismissed.

“When children get malaria,” he says, “They are sent home with an older student to take care of them. So it affects two students.” Last year there were four to five cases of malaria among his students every day. “Right now there are a few absences from school,” he says, “But mostly due to injuries from playing.”

That claim is backed up by a nurse at the nearby health clinic who says that they used to admit 50 malaria cases a month to the hospital. But, he says, between January and June 2012, the number had dropped dramatically to 50 cases over the entire six month period.

At Delfina’s house, a mother hen with nine new baby chicks scuttles through the spotless yard looking in vain for something to eat. As the sun begins to weaken in the winter sky, Delfina’s mother, Aida arrives, carrying baby Graciosa. Aida, 25, is taking a three day course in health and nutrition to learn to better care for herself and her family.

Aida’s daughters are now healthy. “They play. They go to school,” Aida says. “That makes me happy.” And her life is richer as well. “I have opened another farm. I am producing more peas,” she says.

“Before our prayers were to God to protect our family,” Aida says. “Now we thank God for everything that he has done.” She’s delighted to live in a place where her children can be sponsored. “I am grateful for World Vision. I never knew there was such a thing as a net that would protect me from mosquitoes,” she says.

“I used to be afraid of mosquitoes,” Delfina says. “I am no longer afraid because I have the net.”

In a place without fear and disease, families can flourish. That’s why World Vision Mozambique is dedicated to defeating malaria. “I am sure we can win this battle,” says Pablo Varela, a malaria project coordinator in Zambezia who himself lost a sister to the disease. “It is not easy. It is very hard. But we can win.”

The strategy for victory involves canvassing the country with 2 million mosquito nets, including 700,000 in Zambezia where Marita and her family live. “We train volunteers,” says World Vision’s Chandana Mendis. “We are responsible for community messages—radio spots, theatrics, focus groups.” Anything to get the word out that mosquito nets, when used properly, can save lives.

It’s a strategy that’s already working in Nampula Province where mosquito-free nights are leading to industrious days for parents like Manuel and Aida. Their daughter Delfina is getting better grades and the chance to sing and skip rope with her two best friends. Delfina is living the life that Marita craves. All that separates Marita from her dream: a handful of gossamer threads treated with insecticide, a mosquito net to take the fear out of life and rob death of its sting.