Delivered on the floor of a leaking bamboo-and-tarp shelter in the world’s largest refugee camp, she is the first-born of nervous new parents Kismit, 18, and her husband, Azizul, 20.

Kismit is resting after a long night of labour, thankfully without complications. Her mother-in-law, Juhora, cradles Shamsida gently, grateful that her granddaughter is healthy.

Juhora worried about Kismit during her pregnancy and more so now that the baby has arrived. The monotonous rations of lentils and rice that the family eats daily keep hunger at bay, but don’t provide a balanced diet. Kismit and her husband have little money to buy the fresh fruit and vegetables, and meat, fish and eggs that a new mother needs to stay strong herself and feed her baby.

Juhora says she is teaching her daughter-in-law about breastfeeding. “It will help Shamsida grow,” she says confidently. “But Kismit won’t start breastfeeding her until she is three days old. She doesn’t have enough milk yet, so we will give the baby water, honey and powdered milk until then.”

Such myths and erroneous traditional beliefs about breastfeeding can be deadly for children. A mother does produce enough milk to feed her baby if she breastfeeds frequently and for as long as the baby wants at each feed. Giving an infant water or powdered milk can introduce disease-causing bacteria, especially in the camps where well water is often contaminated.

Like Kismit and Juhora, many Rohingya mothers have had few opportunities to learn about good childcare and feeding practices, either in the refugee camps or in their villages back in Myanmar. Many don’t understand that breastfeeding is the best way to provide infants with the nutrients they need.

The World Health Organization recommends exclusive breastfeeding starting within one hour after birth until a baby is six months old. Nutritious complementary foods should then be added while continuing to breastfeed for up to 2 years of age or beyond.

In the camps, the risk of disease is high given the overcrowded, unhygienic conditions. Breastfeeding can give children here the protective edge they so desperately need.

According to a 2013 Lancet Medical Journal study, if all babies were fed only on breastmilk for the first six months of life, an estimated 800,000 children would be saved every year,

Child malnutrition is a critical problem in the camps—and one that breastfeeding can address. Many refugee children who arrived here last year already suffered from malnutrition, caused by poor long-term diets in Myanmar, made worse by the lack of food on their long treks to Bangladesh. 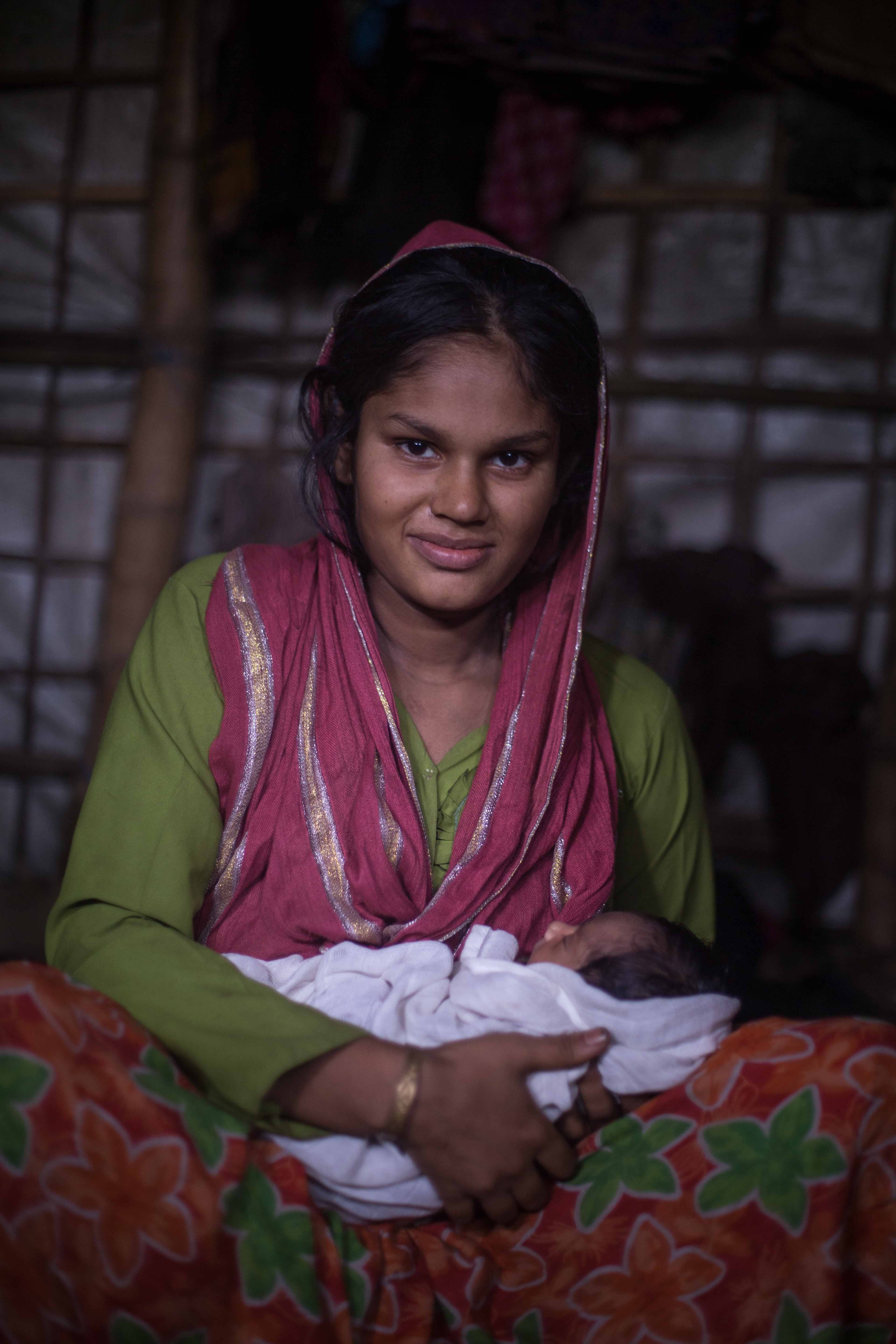 “The current nutrition situation in the camps is not good,” says Colleen Emary a technical advisor with World Vision’s health and nutrition programme. “A recent government nutrition survey revealed that 10-12 percent children under age 5 are malnourished.”

Emary says that despite “an incredible scale-up” of services to treat malnutrition over the past year, children’s health is still at risk long-term.

“The survey showed that 40 percent of children have low height for their age. They are chronically malnourished,” says Emary. “This tells us that even before coming to Bangladesh, they were not getting the diet and adequate services they need.” Less than 10 percent of children age 6 to 23 months in the camps receive a minimum acceptable diet (four of the seven food groups, and three or more meals per day ).

Breastfeeding in the camps

To address this, World Vision recently launched a life-saving programme to prevent and manage moderate acute malnutrition in children age 6 to 59 months and support malnourished pregnant and lactating mothers. The daily programme operates in three densely-populated refugee camps (Camp 4, 8W and 10), conducted in partnership with the World Food Programme.

As part of the programme, mothers learn about good child nutrition practices, including the benefits of exclusive breastfeeding.

Dr. Hazera Muyeena, 30, manages one of three World Vision nutrition centres for children under age 5 and their mothers. Recently joining World Vision after five years of service with Médecins Sans Frontières, she coaches mothers on good nutrition and breastfeeding.

“Many mothers we meet are not aware of the importance of exclusive breastfeeding, and they give their babies rice before they are six months,” says Muyeena. “They don’t think their breastmilk is enough. We teach them to give the baby small amounts frequently and the milk will come.”

Muyeena says many breastfeeding problems are often related to the mother’s nutrition. They must eat well themselves when breastfeeding, but getting a diversified diet in the camps is difficult given that refugees are dependent on prescribed food rations.

“Most women are only eating two meals a day of lentils and rice,” she says. Muyeena encourages mothers to buy fruit and vegetables when they do have some cash. At the nutrition centre, pregnant and lactating mothers, and malnourished women receive supplementary food.

Today, Muyeena is advising Rahima Khatun, 40, who has come to the nutrition centre to have her one-year-old son Ibrahim assessed for malnutrition. His middle upper arm circumference is measured and his height recorded. Thankfully, Ibrahim falls in the “green zone”—he’s growing well. 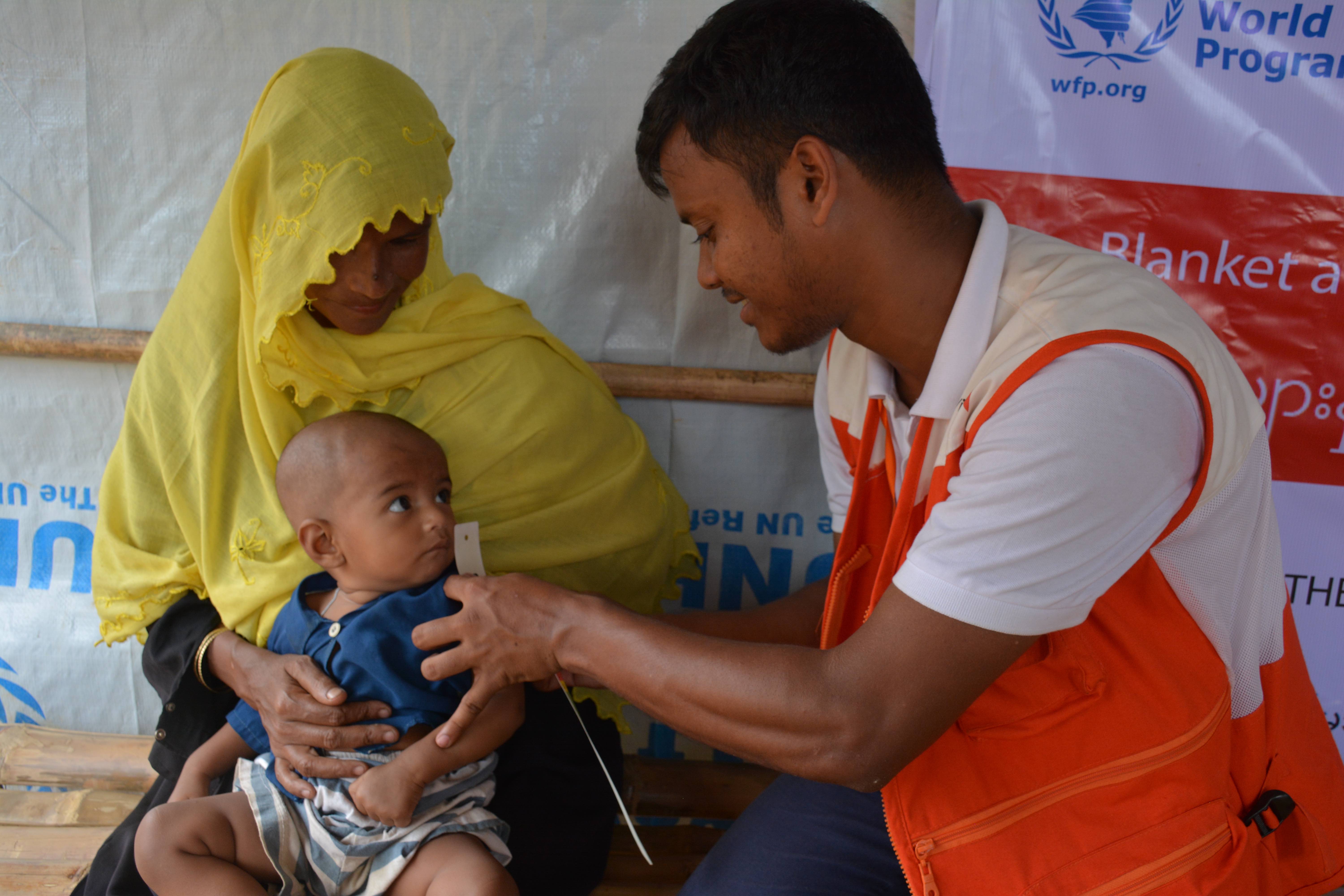 Rahima credits his good health to breastfeeding, as Ibrahim snuggles up to his mother for a quick lunch. A mother of nine children, Rahima says she knows about the importance of breastfeeding but had not exclusively breastfed her older children.

“I gave my babies honey, water and powdered milk when they were born,” says Rahima. “But I’ve learned here at the centre not to do this, and now I advise other mothers not to do it.  I see the difference between my two youngest children, who I breastfed only and those I didn’t. They are bigger and much stronger.

During World Breastfeeding Week (1-7 August), Dr. Muyeena hopes to create a buzz about breastfeeding. “We’ll be telling mothers to care for their children by breastfeeding exclusively and to look after themselves, too, by eating better.”