Out of school for more than 18 months, an estimated 117,000 Rohingya adolescents living in the world’s largest refugee camp desperately need learning opportunities. However, only four percent of these boys and girls have access to any form of education, life-skills or vocational training.

Unemployed and not authorized to work, boys fill their days collecting firewood to earn pocket change. Others just hang out with friends on roadsides, growing bitter about their plight. Most girls remain confined to their sweltering plastic-walled shelters, their parents afraid their daughters will be harassed or assaulted if they allow them to venture outside.

“Education is not a luxury. It is a human right,” says Rachel Wolff, Director of World Vision’s Bangladesh Refugee Crisis Response. “Refugee children and parents tell us that education is a top priority for them. However, there is an overwhelming gap in access for children and adolescents.”

To help bridge that gap, World Vision has launched life-skills and pre-vocational training that will benefit 8,400 adolescents age 15-18. In partnership with UNICEF, the first of 21 multi-purpose centres to be built across 11 camps opened this week. Henrietta H. Fore, UNICEF Executive Director, visited the new centre in Camp #13 recently where she met 80 new enrollees learning mobile phone repair (50 boys) and tailoring skills (30 girls), including Sura, a 17-year-old refugee.

Sura is an entrepreneurial young woman who launched a tailoring business in her village in Myanmar. Like most Rohingya women, she has had little formal education and is illiterate. But that didn’t stop her from advancing her business plan—until the violence that erupted in August 2017 changed her life forever.

“I learned tailoring from a woman in our village who was teaching it,” Sura told Ms. Fore. “I managed to buy a sewing machine and used it for two or three months. And then we fled to Bangladesh. I had to leave it behind.”

Sura’s father died during the exodus, leaving her as the main support for her widowed mother and younger sisters. “We are 10 siblings in my family—six brothers and four sisters. We all made it here, except for my father. My brothers are all married. I am the oldest girl. I need to earn money, but I cannot get a job here.”

At the new World Vision centre near her home, Sura plans to upgrade her tailoring skills so she can make clothes for her family and to sell. She’s also eager to share what she knows with classmates like Fatema, a new-found friend among the 30 registrants.

Sura is thankful for the training opportunity. She says many parents don’t see the value of educating girls, and refuse to let their daughters participate. Early marriage is common in the Rohingya culture. Incidence is rising in the camps as parents marry off girls as young as 14, sometimes to stretch family food rations further, but also out of fear that daughters will be raped, rendering them ineligible for marriage according to traditional beliefs.

“Rohingya girls marry young, but how can a baby look after a baby?” asks Sura. “In our culture, if you wait until you are 18 or 20 to marry, no one will want you. You are considered old. In [Western] countries, you can be 27 years old and not have children yet. A Rohingya woman will have six or seven children by then.”

Sura’s classmate, Fatema, 17, laments that she didn’t finish primary school and is illiterate. “In my culture, girls who are 7 years old are taken out of school,” she explains, pushing back the veil of her black burqa. “We have to help our families on the farm. We make lunch and take it to our fathers in the field. If boys can go to school, we should also be allowed, but we aren’t.”

Fatema believes her future can be different if she has income-generating skills. “I want to learn something here,” she says, as she practices taking dressmaking measurements on Sura. “If we learn tailoring, we can support our families and ourselves. Women in the camps need dresses and burqas. We could make and sell those.” 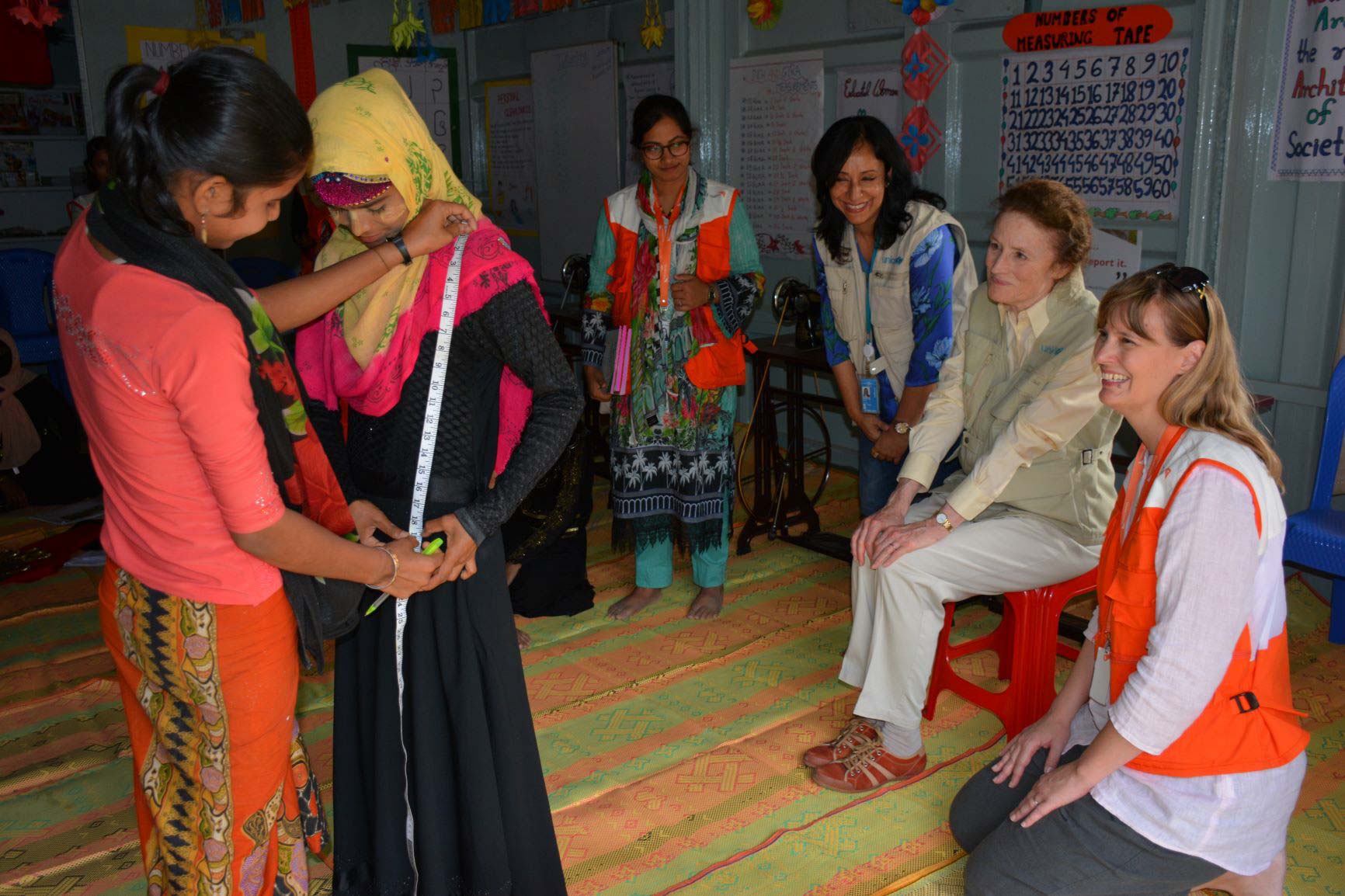 In the workshop next door at the centre, Shahed, 15, is one of 50 adolescent boys learning mobile phone repair. He had just completed his first year of secondary school in Myanmar before being forced to flee to Bangladesh.

“Here in the camp, I was going to a school organized by Rohingya people, but it is finished now,” says Shahed. “I just hang around all day with my friends. We are bored. So I came to this centre to learn how to repair cell phones. Maybe I can start a business with my friends. Someday I want to be a doctor to help my community.”

World Vision is ramping up construction of the additional 20 multi-purpose centres to beat the May monsoon season.