After the 9-year Bougainville crisis which began in 1989, cocoa production fell, affecting thousands of smallholder farmers’ income. The Autonomous Region of Bougainville (ARoB) suffered, so did the PNG economy, which directly benefited from ARoB’ cocoa production, apart from copra. Attempts by farmers to revive the industry were hampered by the cocoa pod borer (CPB) disease which ravaged cocoa trees and affected yield. Cocoa farms were neglected and cocoa farming knowledge gradually began to fade away, especially among the younger generation. 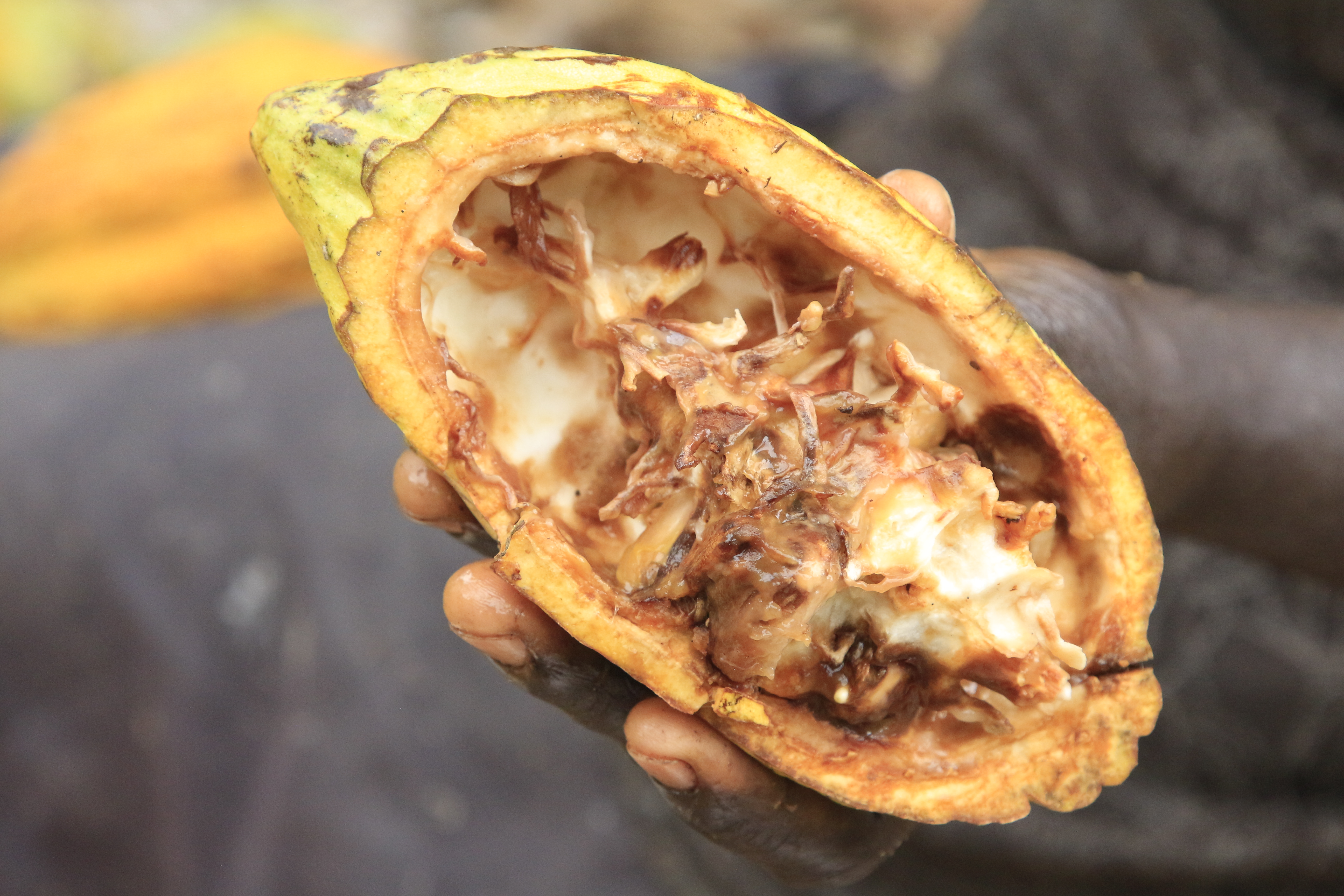 From Eivo Ward in Torokina District, Dominic Ewaita is a farmer who stands out, still holding onto the belief that cocoa farming is their only way out.

“It’s really hard to find or make money to help improve our lives. Cocoa farming is our only hope,” said the father of six. 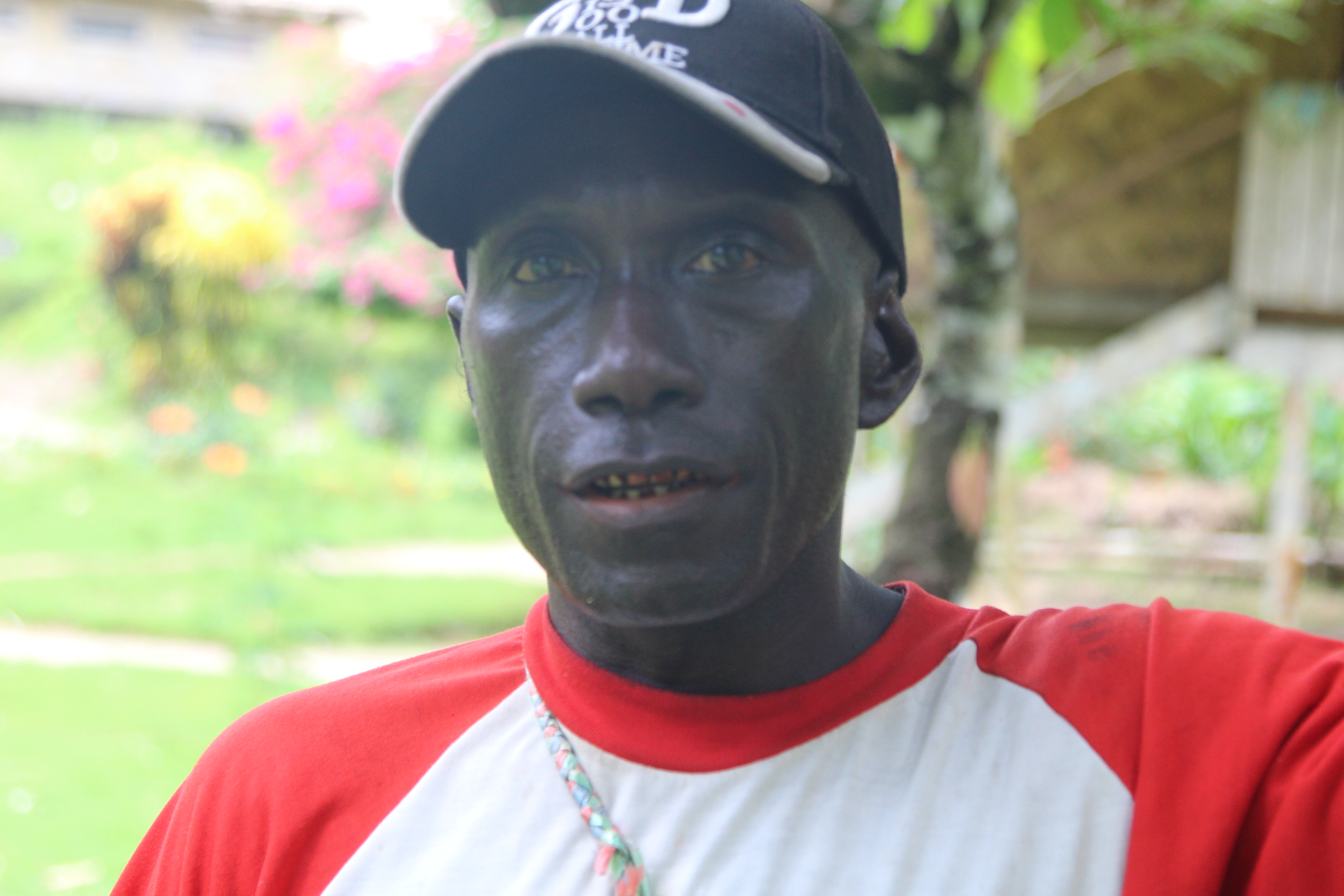 Through the PNG Government’s Productive Partnerships in Agriculture Project (PPAP) Project funded by the World Bank, World Vision is working with partners, including 7,049 farmers in nine districts in ARoB, Madang and Sepik to help revive the once thriving industry.

“In order to maximise the benefits for the farmers' livelihood in their respective communities, we encourage them to participate, commit themselves to all activities and trainings provided by World Vision and its partners,” says Stella Wainetti, World Vision’s PPAP project staff. 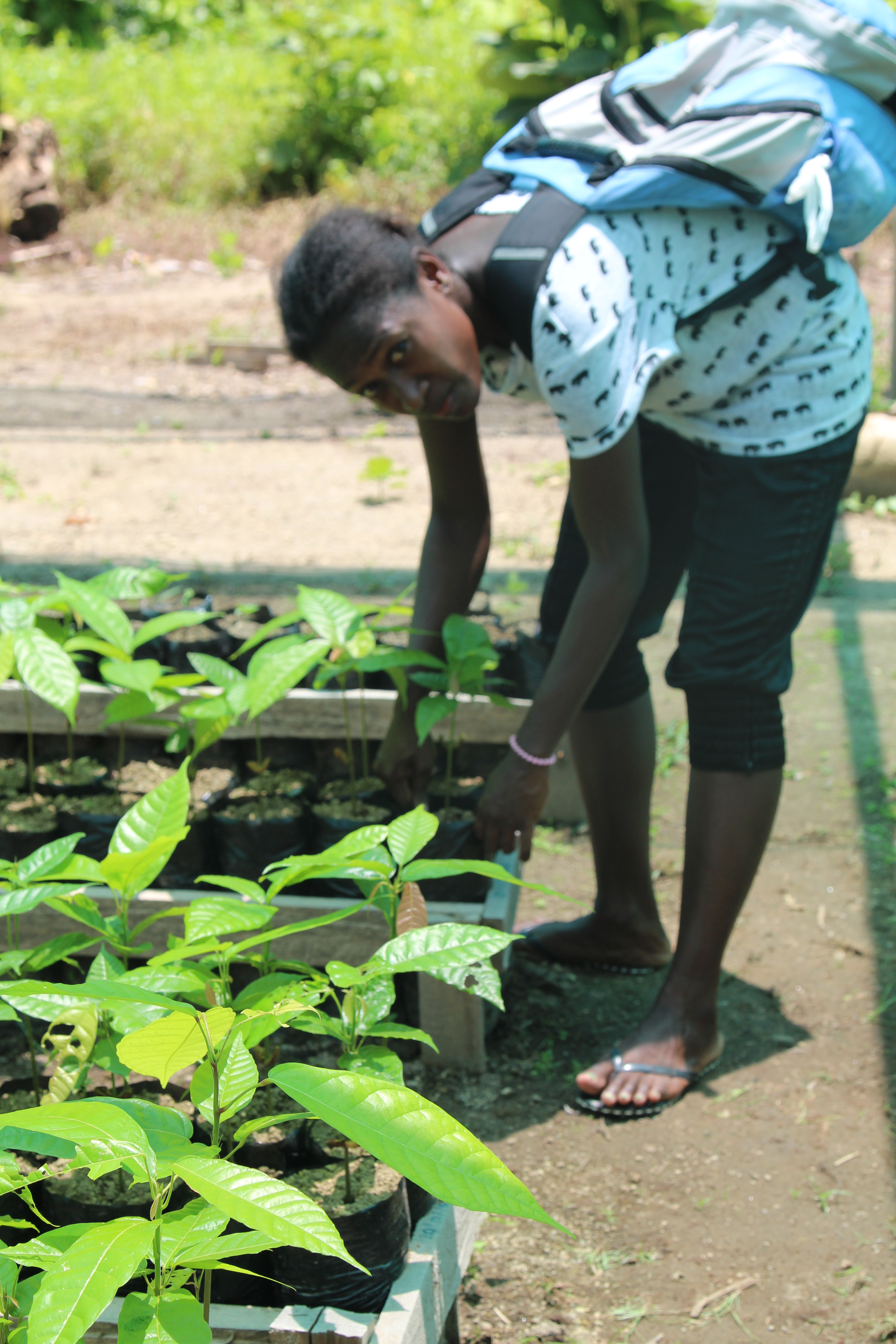 Dominic owns three hectares of land, two cocoa plots and 726 cocoa trees. As lead farmer, Dominic gave away one hectare for the demonstration plot and nursery of 5,000 seedlings which he manged. Seedlings were planted in polybags and after budding, the clones were distributed to registered farmers who contributed 5% as farmers’ contribution. Cloned cocoa budding sticks were used to bud bagged seedlings so the hybrid fruits would be of high quality, and specially grown to be more resistant to the CPB, with shorter trees and easier to manage. Farmers prepare the land and shadings and receive the clones after paying the 5%. It takes up to 18 months for the trees to bear fruit. Farmers are supported through training, crop diversification activities and tools. The cloned cocoa means improved yields and higher income for families. With good management, farmers can eliminate the CPB and bring it under control. Dominic has so far distributed 8,000 cloned seedlings and is now into his third cycle. 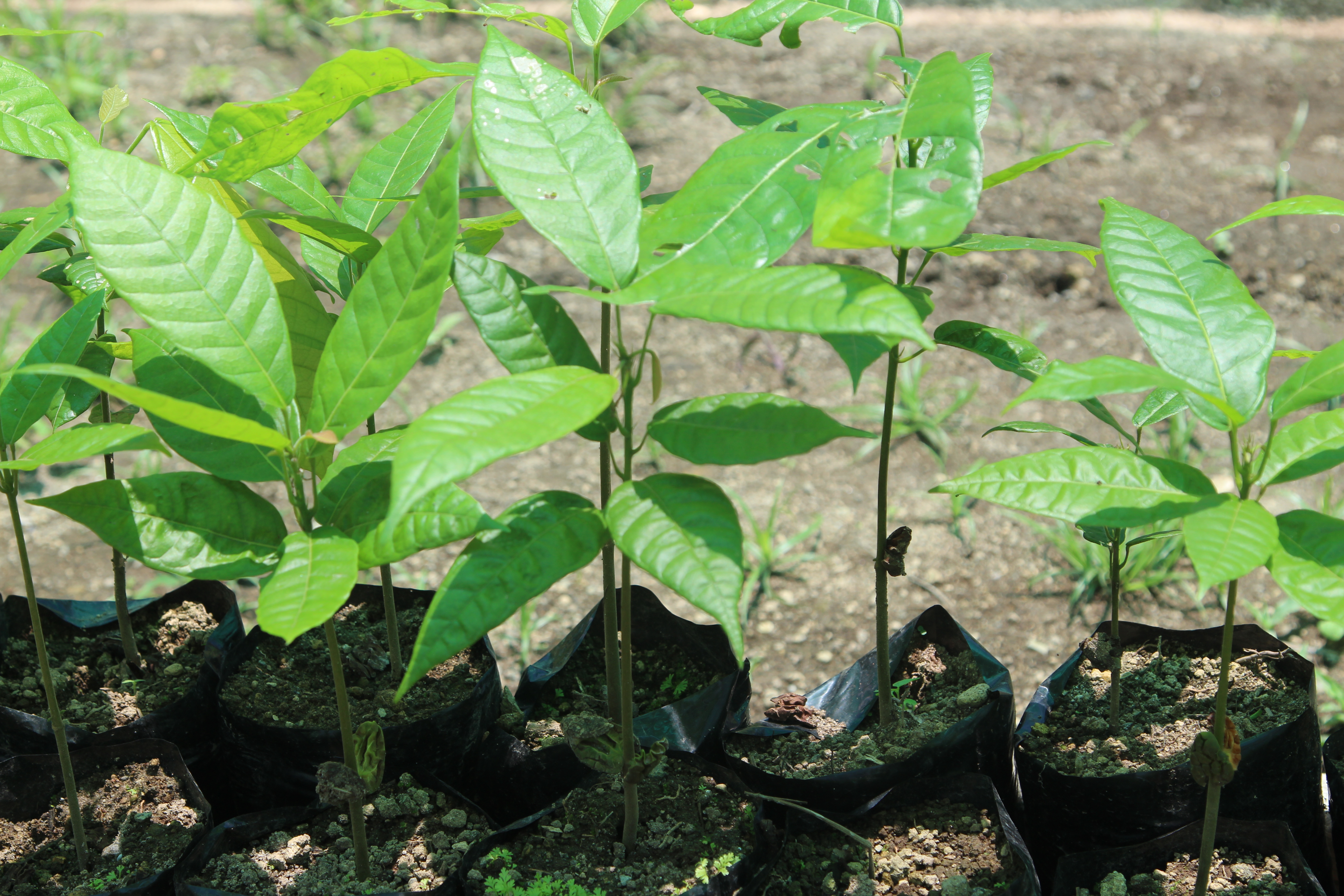 Cocoa seedlings in a nursery

Prior to the CPB, Eivo through cooperatives, produced up to 250,000 tonnes of cocoa. From his current commercial plot which he rehabilitated after receiving training through the project, Dominic now sells 8 bags from K300-K400 (US$93 – $124), making between K3,000-K4,000 (US$929 – $1,239) or higher when the market is good. Other farmers have now shown interest after seeing his cocoa farm revived: so far, three new producer groups have been formed. Highlighting the importance of savings, Dominic says, "It is something new and we want to do it. People here don’t know how to save money and just spend it. For me it is more important to work my cocoa because my family will benefit from it in the future.” 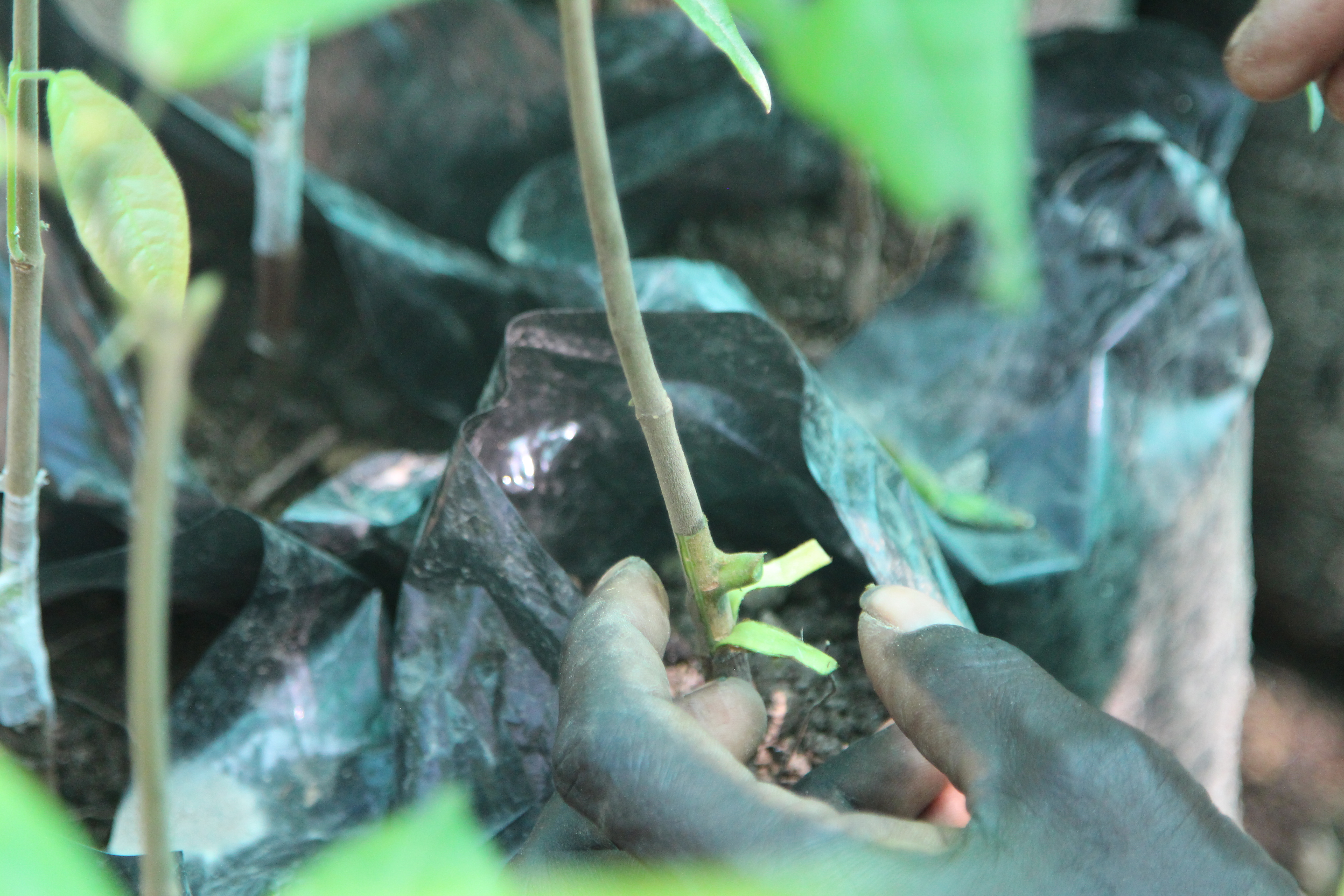 Preparing cocoa seedlings for budding (top) and after budding 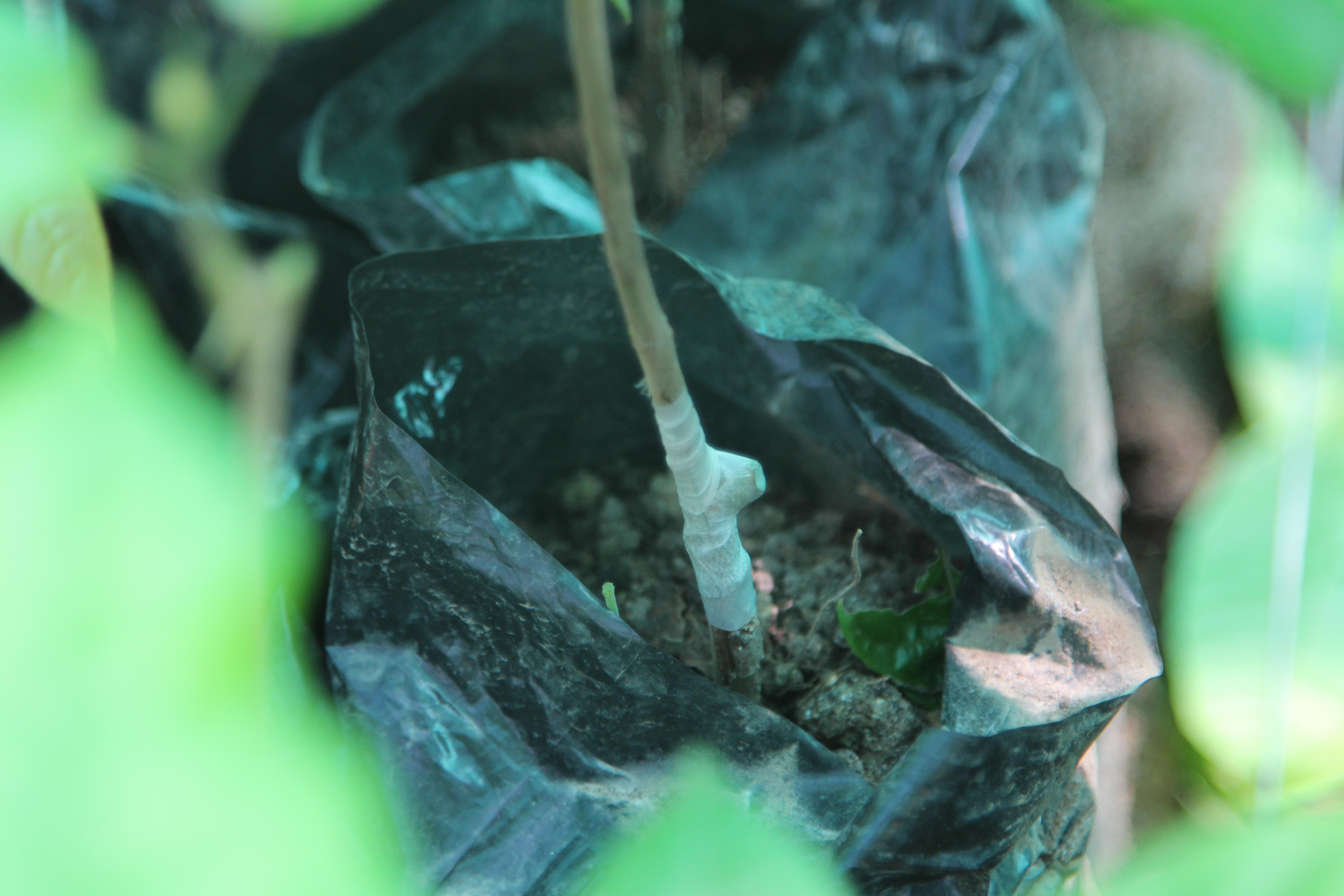 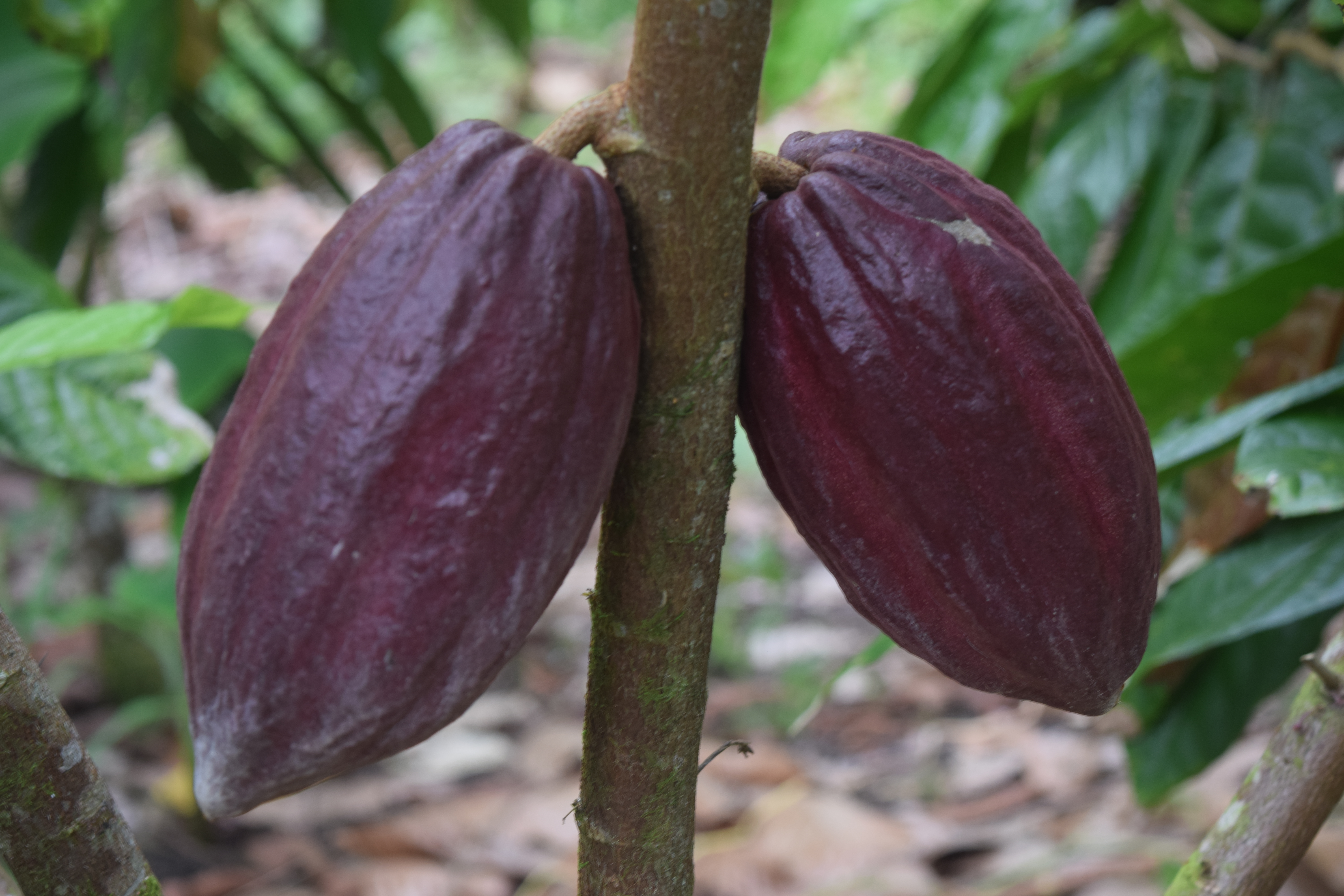 Cocoa farming for Dominic is a family affair. His children are in school thanks to the income from his rehabilitated commercial plot and his children are keen to help in the nursery and earn incomes. They are also learning the skills from their father. Dominic’s wife Gertrude, a member of the savings group is the record keeper. She now operates a small trade store in the village. Due to the increased family income, they are able to afford trips into town, buy new clothes for them and extended family members, etc.,.  Dominic also sells petrol to boat owners, chain saw operators and generator users in the village – both highly profitable businesses. Importantly, it is much of the project’s goal also, to encourage families to move into small businesses with higher returns. 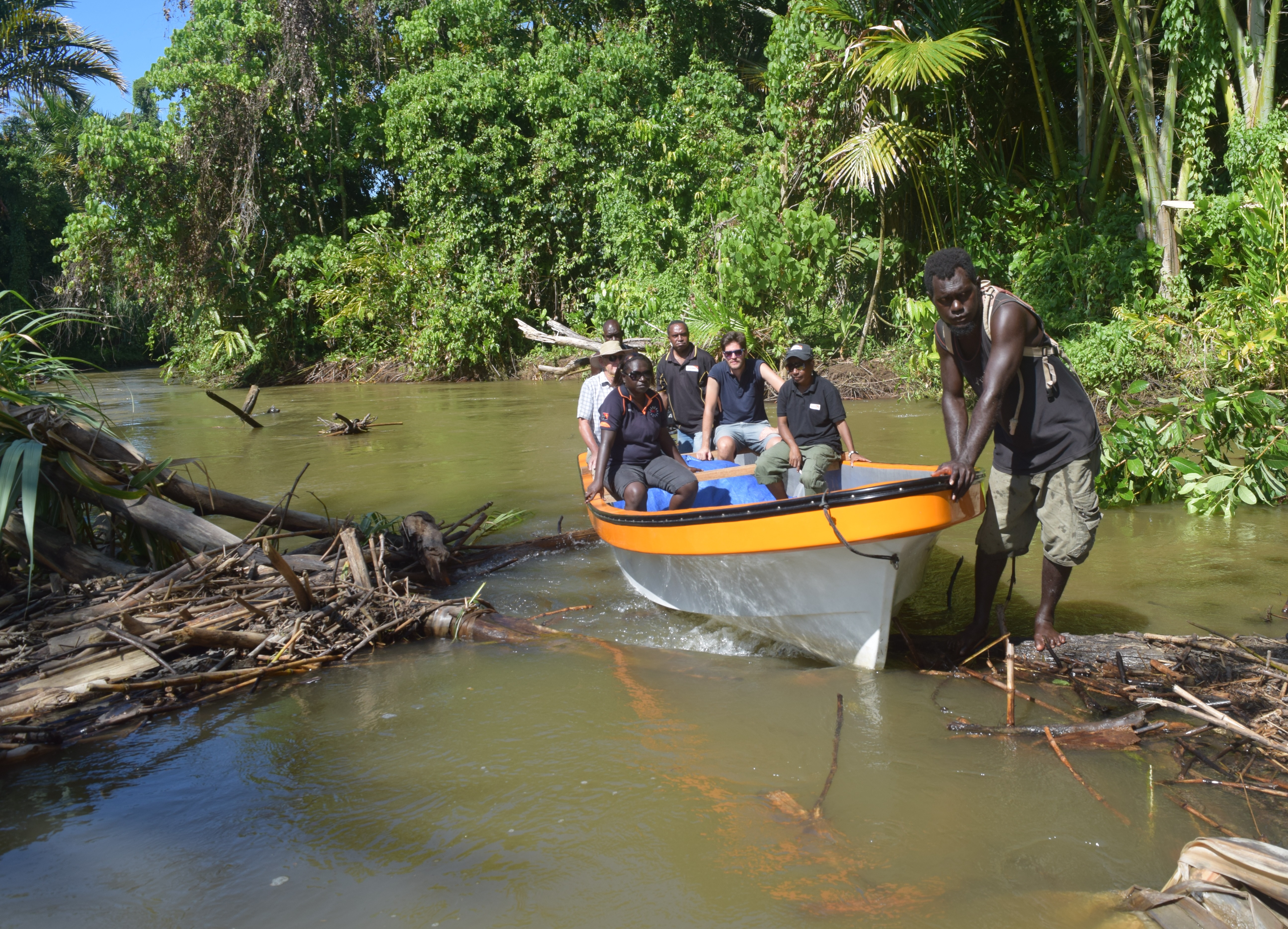 The PPAP Westcoast Bougainville Support for Smallholders Project is working with 507 farmers in five communities to equip them with necessary skills through local value chain development, savings groups, financial literacy trainings and producer group development to upskill farmers to be able to provide well for families, especially children. The 4-year project supported by World Vision Australia will end in July 2017.