At 14, she gave birth to her daughter, Jubaida.

At 17, Smirna became a refugee, fleeing Myanmar with her husband, Shamim, after their home was attacked and burned to the ground. They lost everything.

At 19, Smirna was widowed. Shamim, 32, died of liver jaundice in the couple’s cramped makeshift shelter here in the world’s largest refugee camp in southern Bangladesh.

“We walked for eight days to get to here,” says Smirna, a soft-spoken but confident young woman. “We suffered a lot of things on the way. We came here to save our lives.”

As she shares her story, Smirna sits cross-legged on a plastic floor mat in a circle with a dozen women from her neighbourhood. The women gather each morning here at the Women’s Peace Centre in Camp 13, a safe space for Rohingya refugees run by World Vision.

This is one of the few places that the women are allowed to visit. In the conservative Rohingya culture, women and adolescent girls are rarely allowed to leave their shelters alone. Families fear they will be harassed, abducted or assaulted. However, since the centre opened on International Women’s Day (8 March), staff have gradually won the community’s trust. Each week, 24 women and girls attend the sewing classes that are offered here. Many also take advantage of the counselling services for survivors of gender-based violence.

This morning, the women listen intently to Smirna’s story as they embroider and hand-stitch a pink cotton table cloth together. Most can recount similar stories of harrowing, violent escapes from their homeland.

“My daughter cried so much on the journey,” continues Smirna. “I had no food to give her and she became so weak she could not walk. My husband was sick; his brothers had to carry him on their shoulders. It was difficult, but we had no choice. We had to survive.”

Two months after the couple arrived in the camp, Shamim died. Smirna is now the sole breadwinner; she’s never had a day of schooling and cannot sign her name. Undaunted, she is determined to learn how to sew through classes offered at the centre to earn even a little income to sustain Jubaida and herself.

“I’m a fortunate woman,” says Smirna, reflecting on her short life that some might describe as tragic. “My father married me off out of necessity because my family was so poor. I had no choice, but my husband was a good man. He never beat me and his family was kind to me.”

Not all women are as fortunate, notes Smirna. “My sister married an alcoholic and her life has been very different from mine.”

In the sewing circle, the women’s discussion often turns to marriage and too often to violence. According to a recent BBC Media Action study, violence against women and girls within relationships is normalized within the Rohingya community. Women rarely seek support unless they need medical treatment. Intimate partner violence is accepted by both men and women as a normal way of moderating behaviour, and as a natural consequence of a woman not performing her duties properly. Of the reported cases of gender-based violence in the camps, 71 percent of the incidents occurred in the survivor’s home; intimate partners committed 74 percent of these cases of violence.

Some Rohingya women who attend the centre say they believe incidents of physical and emotional abuse have increased since they arrived in the camps. Domestic violence can be linked to the extreme emotional stress that refugee couples face, as well as financial strain and coping with living in cramped conditions. Frustrated with not being able to work, husbands become angry when their wives ask for anything, using physical violence to silence them.

“We had a peaceful family in Myanmar, but my husband has taken two more wives here,” says Khadia*, a 30-year-old mother of three children. “He doesn’t provide any money, but he asks me for food. Anything he earns, he gives to the other women. When I asked him why he does this, he started to beat me.”

Living in fear, Khadia shared her secret with her neighbour, Tasmin, who invited her to come to the centre.

“This is a place where women can feel free to talk with others over a cup of tea,” says Ruth Kimaathi, a Kenyan psychologist who leads World Vision’s GBV-prevention programme supported by World Vision Canada. “We provide counseling for women who are experiencing gender-based violence and refer them to other professional services available in the camps.”

Khadia found the support she needed to cope with her home situation. “When I come here and share my grief with others, I feel better,” confides Khadia. “The staff give very good advice.”

At this centre, Ruth and her colleagues train women how to recognize GBV and prevent it. Many men and boys have also been trained on violence prevention—becoming advocates for their wives, daughters, mothers and sisters.

“Real men don’t beat their wives,” insists Smirna, an empowered graduate of the GBV-prevention workshop. “It’s not a question of place—of where you live. If you are a good person, even if you live in a jungle, you won’t beat your wife.”

Smirna and Khadia agree that their new-found circle of friends at the Women’s Peace Centre has made life in the camps a bit more bearable and given them a sense of security. “World Vision staff have taught us how to speak up if we are abused and report it,” says Smirna. “As a widow, I am the father and the mother for my daughter now. It’s good to know World Vision is here to help us.” 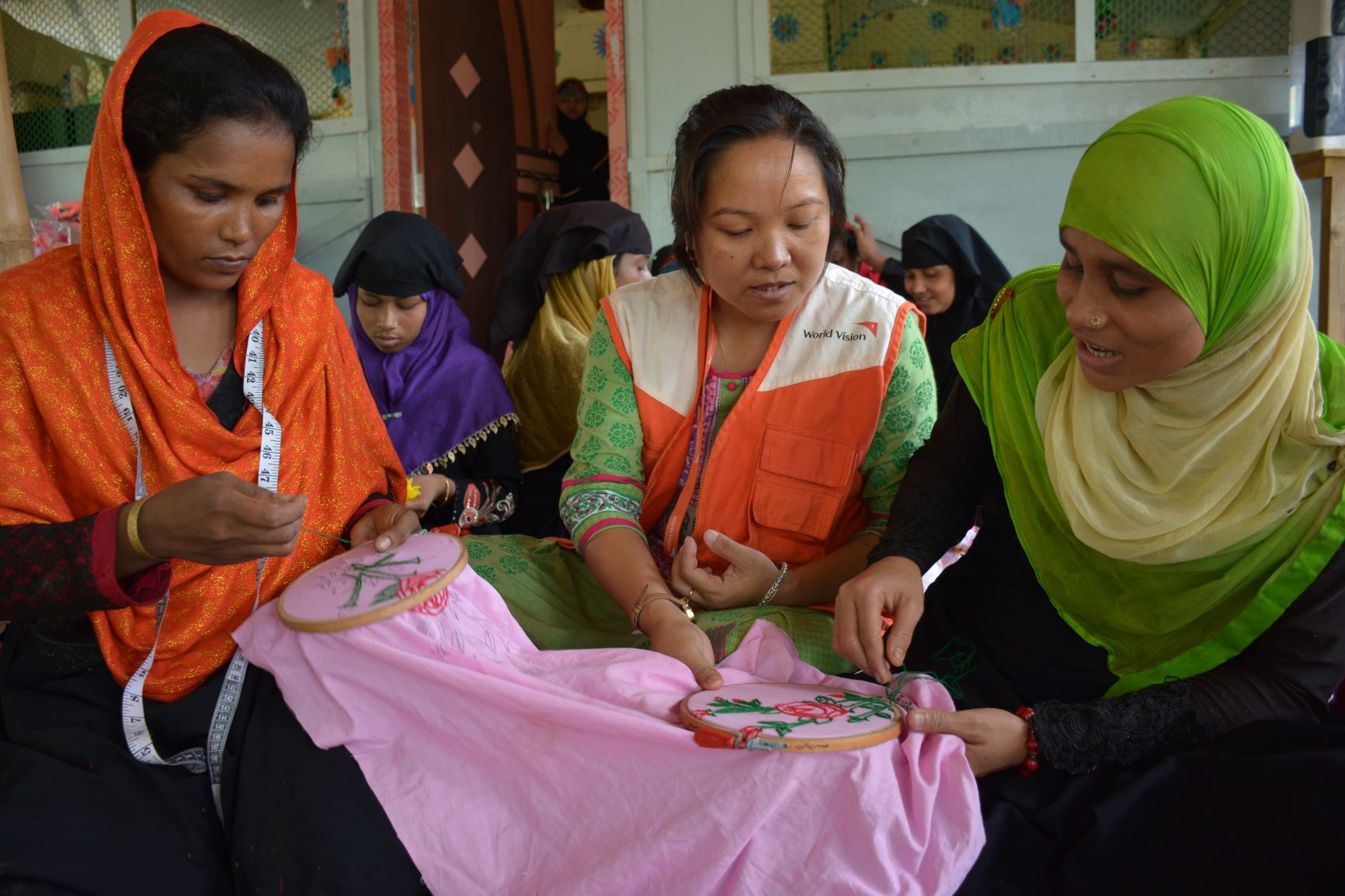 Sharly Mayshew Prue—winner of Bangladesh’s most prestigious award for women’s development—believes she has the perfect job. As a gender-based violence prevention officer with World Vision’s Women’s Peace Centre, she teaches new skills to illiterate Rohingya refugee women who have never worked outside their homes.

“I love my work because I’m not only teaching women skills, I’m changing attitudes,” says Sharly, overseeing a class of 24 women and girls learning to operate peddle sewing machines. A designer and entrepreneur who created fashions for Bangladesh’s elite, Sharly now works with poor, vulnerable women in the world’s largest refugee camp.

Prior to joining World Vision one year ago, Sharly served with the Christian Commission for the Development of Bangladesh, a prominent NGO. She gained many years of experience in gender-based violence prevention. At the World Vision centre, she combines her creativity and credentials to help Rohingya women better their lives.

“If you have no means of earning money, you are not empowered,” says Sharly, a bubbly, engaging optimist. Currently, Rohingya refugees are not allowed to work within the camp. Sharly is preparing women for the day when that government restriction is lifted. She believes barriers are for breaking. In 2016, she started a weaving cooperative with 60 women in one of the country’s poorest regions. It became extremely profitable, eventually being bought by Aarong, Bangladesh’s largest retailers of ethically produced handicrafts.

Recognized nationally for her innovative work with the weavers, Sharly hopes to replicate her success with the Rohingya one step at a time.

“Learning a new skill like sewing helps relieve the tension and constant worry these women live with,” says Sharly. “It renews their minds and hearts.”

*Khadia’s name has been changed.