The 8th of March celebrates women around the world. This international commemoration aims to raise awareness on gender equality and intends to break the bias in communities, workplaces, or schools preventing women from accessing better life opportunities. In Lao PDR, rural communities from southern provinces are showing promising change towards a more equitable and harmonious relationship between husband and wife.

With the Accelerating Healthy Agriculture and Nutrition (AHAN) Project, the European Union, together with World Vision, is creating enabling conditions for a more equitable future for women in Savannakhet, Saravane, and Attapeu provinces. The project which started in 2018, has run a series of awareness-raising activities, gender-sensitive training, and provided resources to vulnerable families and their communities to spark this social behaviour change.

The European Union’s support for The Gender activities of the AHAN Project represents a total of USD 631,000 of funding, including USD 425,000 from the European Union and USD 206,000 from the Australian Department of Foreign Affairs and Trade, additional donor of the project. A total of 25,000 labour-saving devices, including energy-saver cookstoves provided by CIVITAS, pushcarts, and 1,000 L water tanks have indeed been distributed by the project staff to the beneficiaries (one device per household) over the last two years. Now in use, these devices have significantly contributed to saving time spent by women in the housework. 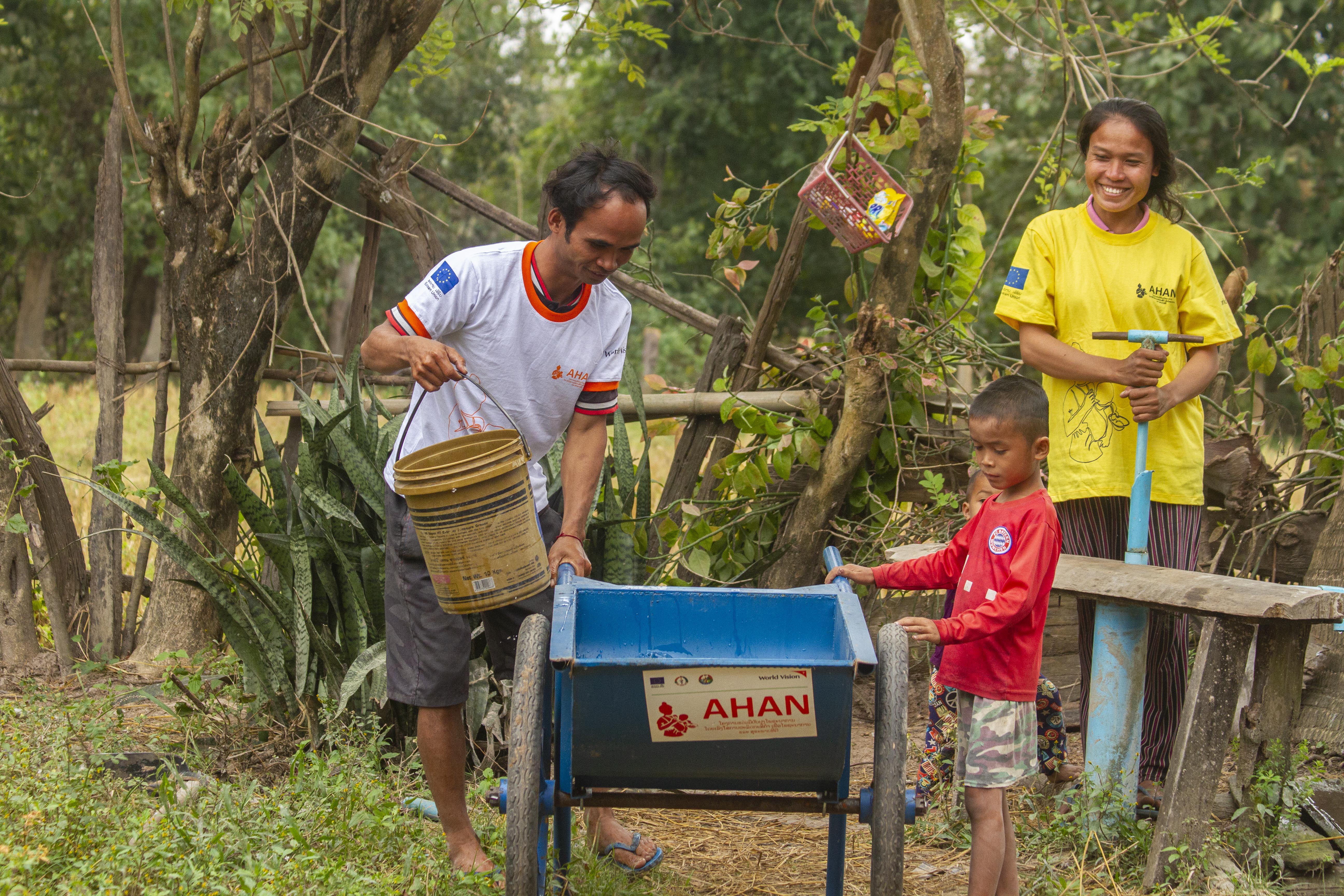 © World Vision International – In Savannakhet, Mr Sisavanh (white) and Ms Thin (yellow) are sharing the house chores, a change that happened after attending the activities of the AHAN Project. They received a pushcart from the project, which allowed them to carry heavy loads more easily.

Alongside materials, the project teams have conducted 144 Gender-Equality awareness events with the participation of about 4,000 villagers. To build a sustainable action towards equitable relationships in the target communities, AHAN has established 116 Community-Change groups, a new platform where families come together to identify and address the harmful practices towards nutrition, including women’s heavy workloads during and after their pregnancy. The EU-funded project also trained households on financial literacy planning, gathering husbands and wives to share the decision-making power, particularly on nutrition. The project, in addition, has established 93 small-scale rice mill businesses in its target villages. These rice mills, owned by villagers, have freed over 15,000 women from manually milling the rice, which is labour intensive.

Since the start of AHAN’s gender mainstreaming and specific activities, women have been positively impacted, with the following quotes from our beneficiaries: “In the past, my husband didn’t help me much, but now he does. It’s very convenient for me when he carries the firewood or the water with the pushcart. Our life is getting better now” says Ms Thin, a beneficiary from Phalanxay district, Savannakhet province. Now husbands are here when it counts, a notable change shared by the beneficiaries: “during my last pregnancy I didn’t work at all, it’s my husband who did all the work. It’s very different from the past when my husband didn’t help at all” says Ms Mai from Thapangthong district, Savannakhet province. With more support from their husbands and more time to take care of themselves and their children, women build their equality among their communities.

All AHAN’s gender activities are run hand-in-hand with the Lao Women’s Union to deepen the project’s impact and build a sustainable change in the target communities. World Vision and the European Union are committed to achieving gender equality and empowering women and girls in Lao PDR, with more participation from women and combatting violence against women.