South Sudanese Refugees are brought together and connected by the ritual of food. Yet over 200,000 refugees in Bidi Bidi need continued support.

Already, food rations have been cut by 30%*. During the days after food distribution, most households are able to prepare three meals a day; breakfast, lunch, and dinner. Within a few weeks, however, in anticipation of the next food distribution and due to shortages, most families resort to a single meal a day. For some, nothing.

According to Comfort Cynthia Achayo, the World Vision Deputy Food Assistance Manager, if the situation is not addressed, the joy, happiness, and social cohesion that food brings to the South Sudanese refugees will also deteriorate.

“Food does a lot more than being a meal. Refugees use food distribution points as meeting points with friends that they haven’t seen in a while, to catch up, and conduct trade and business. They also use food to celebrate various social and family functions. Having the food further reduced, affects all this,” Comfort says.

We have empowered and supported the refugees to establish kitchen gardens which allows them to grow vegetables in small gardens in their backyard, to supplement the food ration that WFP [World Food Programme] gives them through World Vision,” adds Comfort.

As the food crisis situation across Africa deteriorates, we cannot forget the cost of one simply meal to many, means so much more other families currently living in crisis. The joy of sharing a meal translates across countries and cultures. As we look at one families celebration we can all connect with the anticipation and excitement for a family member returning home, but we also see that when food is scarce this meal is much harder to prepare.

26-year-old Janet and her mother Charity, 47, wake up at 6:30am every morning to prepare the day’s meals for the family. Today, however, will be a little different and special. The family is expecting an important visitor, Janet’s brother, who she has been separated from since the chaos began in South Sudan.

“We have to make the day memorable by having such a great meal.” Janet explains.

Janet’s father has ensured there is some money to be used to prepare the best meal for the day. He also leaves clear instructions to his sons to slaughter his only goat. They have a small garden around the house where they grow vegetables and pumpkins to supplement the food they receive from World Vision. 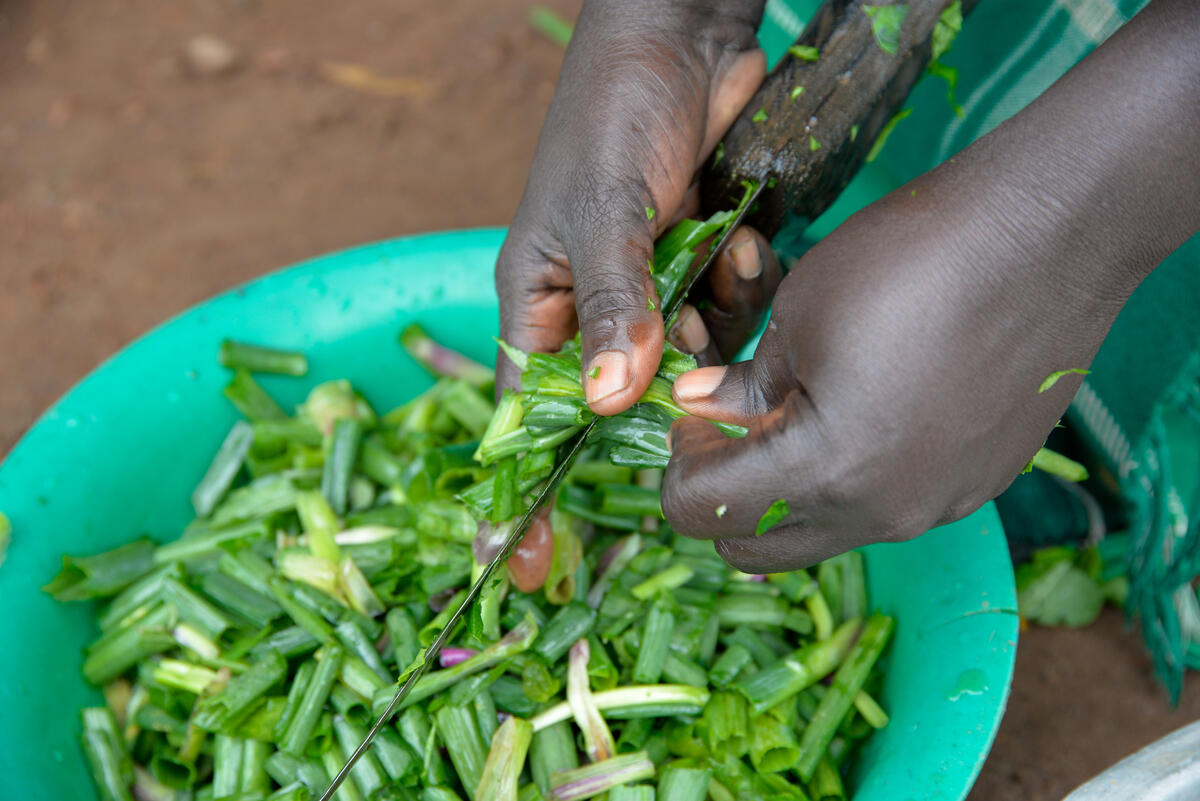 When we think about making lunch or dinner for ourselves or family, often it’s quick and simple, with ample access to groceries, appliances and more. The reality for millions of people around the world however, is that food is scarce and hard to prepare. In the Bidi Bidi refugee settlement, preparing a day’s meal is neither quick nor easy.

“We have to wake up early and start preparing breakfast because the firewood is so bad and it takes so long. If we wait until the children wake up, they will be so hungry,” says Charity.

After over four hours in the kitchen, breakfast is served. Pumpkin and tea.

“This is the easiest and fastest breakfast to make. We grew some pumpkins in our small garden here, so, I just cut it, add some water, and salt, and put it on the fire. When it’s almost ready, we prepare the tea,” she explains.

Immediately after breakfast, preparations for lunch begin. Janet goes to the market to buy better firewood, and some of the best spices and ingredients she knows, for the various dishes to be prepared. In the meantime, Charity sorts the cowpeas, washes them, and puts them on to cook. 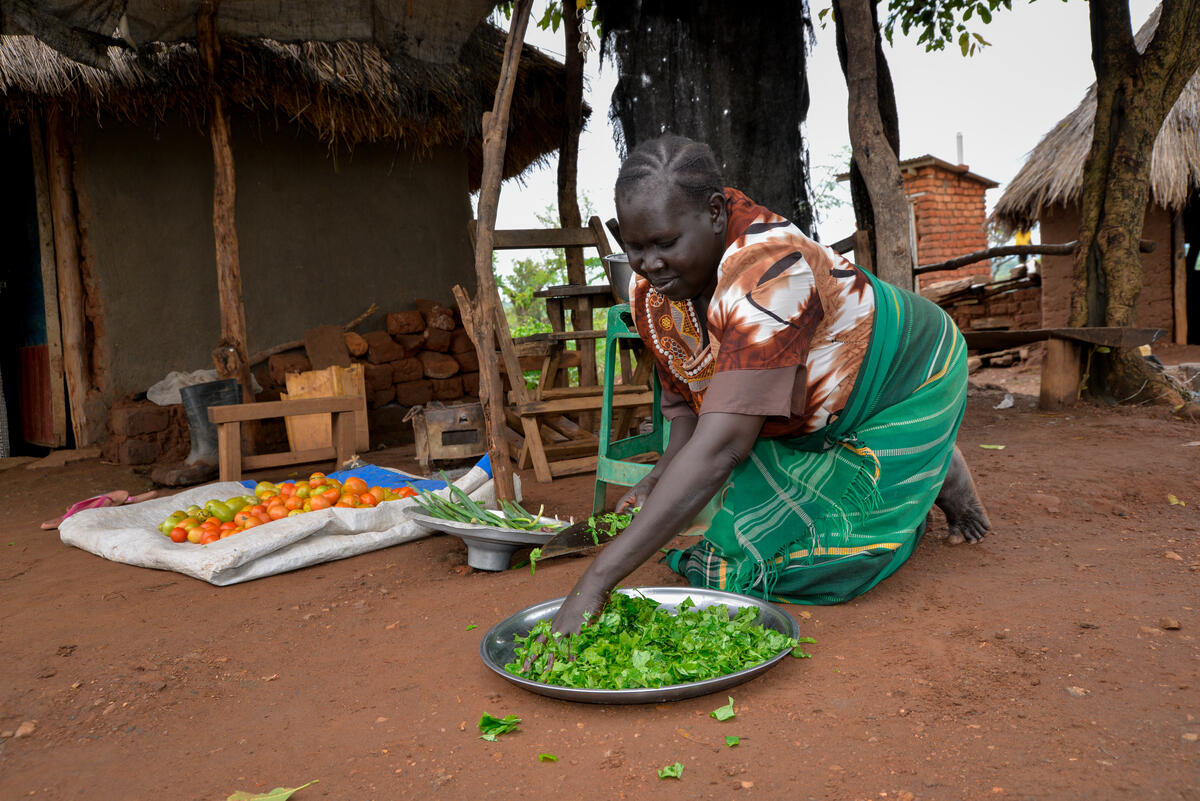 After over an hour of cooking, the peas are ready. These are fried and mashed to make a thick sauce. The family is having Dura (mingled sorghum) for lunch.

At 1:30 pm, the children go first, each picking their plate of food and joyfully retreating under the shade to enjoy the meal. A few more children have come from the neighbourhood, and Charity makes sure that they are served as well.

After having lunch, the children rush to the family’s radio set and blast into praise and dance, to let the food digest. All visibly happy and satisfied, the elder boys turn to the exciting task that their father asked them to do -slaughtering the goat.

At around 5pm, the long-awaited visitors arrive. The excitement and noise attracts more spectators. The visitors are offered drinks - water and soda, accompanied with some yellow bananas to calm their hunger as dinner gets ready.

At 7:30 pm, dinner is served. There are three forms of chevon sauce; Stewed, fried and offal. These will be served with everyone’s favourite, Banda (Mingled-Cassava).

At this point, more neighbours and village elders have joined. They chat, laugh, and celebrate.

“When we come together like this over a big meal, we feel united and the visitors feel so welcome as well,” says Pastor Isaac Badaye, who is attending dinner with the family.

Events like this, while joyous, are becoming increasingly rare. Without adequate food supplies and due to lack of employment opportunities, families are forced to ration their distributions and limit their meals in order to survive.

“I always try my best to ensure that we at least have one meal a day. As a man, my family look up to me to provide for them, it is a big responsibility. I will have failed if I don’t provide them what to eat,” says Charity’s husband.

You can help us to support families, like Janet and Charity’s, around the world in the midst of a hunger crisis. Simply donating the price of your next meal — whether that’s $9, or $38 — you can provide enough food for vulnerable families in need.