Five-year-old Jannatul Firdous is deep in thought. How best to describe the meaning of her name? Jannatul Firdous means heaven — the best heaven — so she wants to get it right.* “Heaven is a place where children can play,” she begins as her 26-year-old mother, Salima**, gazes at her with a sweet half-smile. “There are many flowers,” continues Jannatul. “There is a big pond of water. Heaven is a happy place.”

Camp 13, where Jannatul now lives, is no heaven. Children play in the dirt, kicking up dust that floats in the hot afternoon air. It’s a far cry from the lush, green countryside surrounding the home she fled in Myanmar. Here, there’s no playful splashing in big ponds. Instead, Jannatul must lug heavy metal water containers from a pump up a steep hillside staircase that leads to her family’s makeshift shelter.  In Camp 13, some sweat under a hot sun, breathing in the diesel fuel stink of trucks loaded with bamboo poles. Amid the cacophony of clinking shovels and pinging hammers, they lay bricks and fill burlap bags to shore up steep hillsides to prepare for the coming monsoon season. 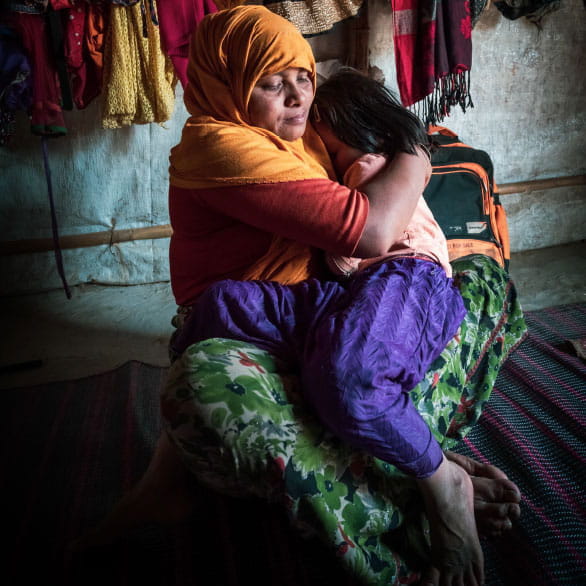 Jannatul lives in the world’s largest and most densely populated refugee camp in Cox’s Bazar, Bangladesh. Of its nearly 1 million residents, more than half are children. Most of the people here are Rohingya, a persecuted, predominately Muslim-minority group from Myanmar, who have faced discrimination in Myanmar over several decades, including the denial of citizenship. In August and September 2017, more than 720,000 Rohingya fled to Bangladesh, driven from their homes by extreme violence in Myanmar’s northern Rakhine State. They joined about 200,000 Rohingya who had previously fled here.

*Jannah is often translated in the Qur’an as “heaven.” Jannatul Firdous is Islam’s highest level of heaven. **Name changed for protection