“Water means life for women in this camp,” says Lalaputu, 31, a refugee mother of six children. “Water is the most important thing I need. Without water, cooking meals, washing clothes and bathing would be impossible.”

Lalaputu has lived in the world’s largest refugee camp here in Cox’s Bazar, Bangladesh since fleeing violence in Myanmar in August 2017.

Alongside almost 1 million people, one of Lalaputu’s challenges was getting safe water for children—a problem she didn’t worry about in her home village in Myanmar. There her family had a tube well next to their house. They could get water whenever they needed. Neighbors also collected water from their tube well. 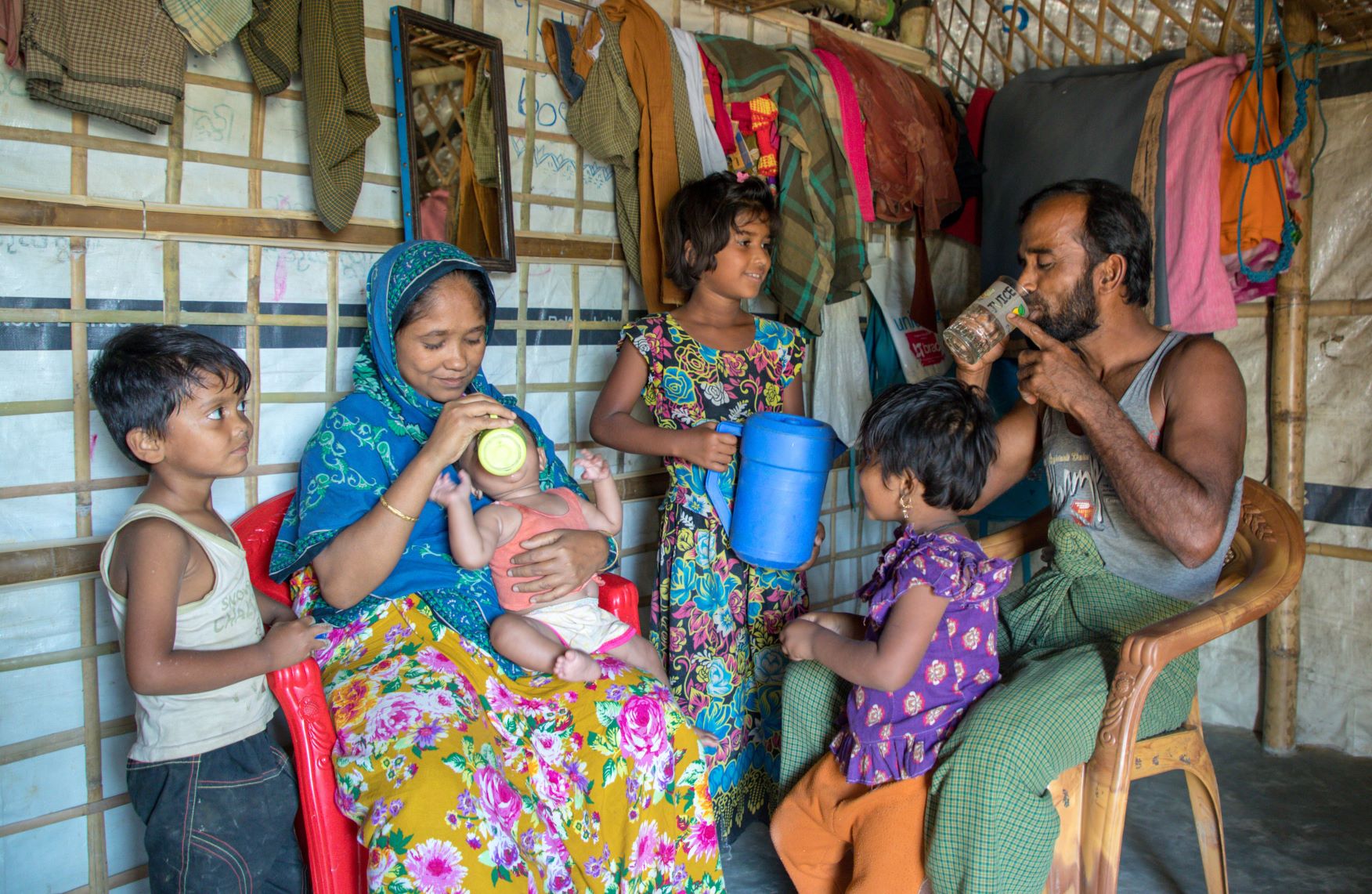 Lalaputu’s husband, Rahamat, recalls the family’s early struggles to find water in the refugee camp. “A bit far down the hill from our shelter, runs a stream. The water is not deep, but it flows,” says Rahamat. “But the water is not drinkable. We dug a hole beside the stream and waited for it to fill up. We hoped the sand and soil would work as filters.”

Sadly, Rahamat’s desperate measures didn’t work. “My children and my wife got sick drinking that water,” he says. “They had diarrhea and other health problems, but we had no choice. We had to drink that water.”

In the following months, more than 20,000 makeshift emergency wells were installed in the camps. However, ground water from the shallow wells couldn’t meet the daily demand in the camps. Many of the wells ran dry or became contaminated with run-off from latrines built in too nearby. Rahamat says water from the shallow wells near their home contained high levels of iron and it smelled bad.

Thankfully, those days are over. Conditions in the camp have dramatically improved, especially in the water, sanitation and hygiene sector. Working in cooperation with the Government of Bangladesh, NGOs and UN agencies have constructed thousands of wells, latrines and bathing spaces across the 24 refugee camps. With the support of donors and partners, over the one and half year (September 2017-March 2019) World Vision has installed 219 deep-tube wells, 1,899 latrines, 2,381 hand-washing points and 675 bathing cubicles in the camps, benefitting more than 120,000 children and family members, including Lalaputu and her family.

Now Lalaputu and her daughter, Ismatara, 8, can collect water from the deep-tube well near their house. Each deep-tube well serves 100 families, about 500 people on average.

Ismatara no longer has to walk far to collect water, scaling the camp’s many steep sandy hills while balancing a heavy eight-litre aluminum water jar on her hip. It was tiring and time consuming. Sometimes, she had to miss sessions at the child-friendly space that she loves to attend.

“This tube well removed the pain of collecting water from afar,” says Ismatara. “I can drink water and bathe easily now. Drinking water from the tube well doesn’t give me stomach pain and diarrhea. It’s safe!”