“In my own cocoa block, I have seen that my plants start bearing pods even when they are still short and for that I’m very happy”, says Raymond.

Raymond is a cocoa farmer under the Productive Partnership in Agriculture (PPAP) Middle Ramu Cocoa Diversification and Marketing Project.

The project is funded by the World Bank, International Fund for Agriculture Development (IFAD), the European Union (EU) and is implemented by World Vision with the support of the Project Management Unit (PMU) of the PNG Cocoa Board.

Middle Ramu is a district in Madang Province and lies along the Ramu River with no access to a road. The only mode of transport is by a canoe or a fiberglass dingy powered by an outboard motor. Estimated distance for travel is more than 110 kilometers each way. Projects implemented by World Vision in Middle Ramu District are seen to be complementing each other.

The livelihood projects of PPAP and Financial Literacy and Inclusion (FLIP) funded by the Australian Non-Government Cooperation Program (ANCP) is empowering parents to return to their once forgotten cocoa blocks with a new interest in cultivating cocoa.

Raymond says, “As a PPAP Farmer, I attended a training on Tree Germination for Seedlings. Apart from that, I have received advice from other farmers and that has helped me with my own cocoa farming”.

He says that they had some knowledge on how to plant and tend cocoa but many lost interest because of the Cocoa Pod Borer (CBD) disease.

He affirms, “However, with the support of World Vision and their introduction of clone cocoa seedlings, we became interested in cultivating cocoa again”. Raymond says that compared to the past, their cocoa seedlings now grow much faster and look healthier.

He and his wife, Sylvia are also members of a Savings Group under the FLIP Project, implemented by World Vision and supported by ANCP to encourage budgeting and saving of money.

He says,” The FLIP project has taught me how to discipline myself on how to save money and because I have saved money by contributing to my savings group last year; I have now used that money to pay for my child’s school fee this year. That is one way I have seen FLIP assist me in assisting my child’s education”.

Sylvia affirms, “We have been putting money aside for our children’s school fees as well as for times of emergency when they are sick and need to go to a hospital”.

She says that apart from their immediate and emergency needs, they are putting money aside for their children if they progress to higher learning institutions.

She adds, “we can use the money we have saved to help them to continue their education. I help my husband with our cocoa block, often to cut grass and we cooperate well. We are always together in whatever we do, we enjoy working together in our cocoa block because we want to be able to earn money through our cocoa so we can buy what our children need. That is my and my husband’s focus”. 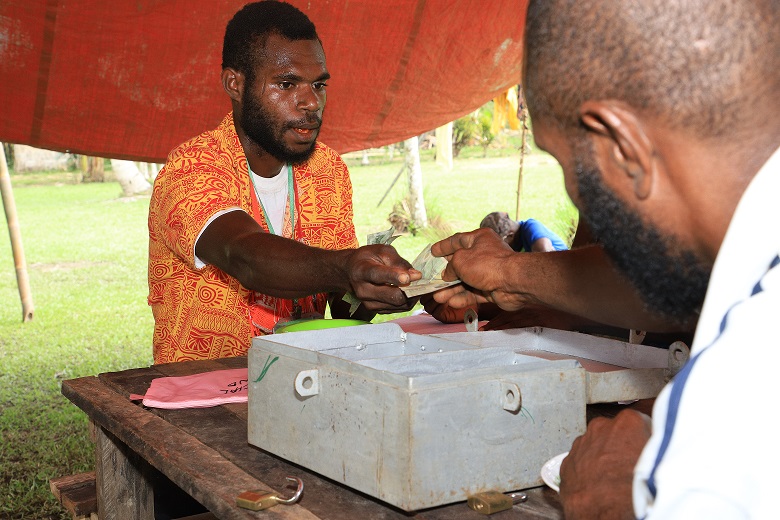 Raymond says, “The PPAP and FLIP projects that World Vision has implemented in Kwanga has benefitted my family in many ways, my child is now very interested in school and enjoys it and my wife has also improved on how to take care of our children, keep our home clean and in many other ways”.

He says that he also been able to communicate better with his clan members and community to organise them on how to work on their cocoa blocks; these he says are some of the many changes he has seen and he is very thankful for it.

Jonah Khaisum, the Project Coordinator says the district has 600 registered farmers and so far, they have distributed 93,140 cocoa clone seedlings from the target of 120,000.

He says, “Many gave up on Cocoa farming after the Cocoa Pod Borer (CPB) disease but now they are going back because we are here every month working with them, training them, helping them to generate that interest again so they can start working on their blocks”.

He adds, “The PPAP project and the FLIP project complement each other by working with the same 600 registered cocoa farmers under the PPAP project and having them in organised groups of 10 – 25 people in Savings Groups with the goal that when cocoa is into full production and when they are getting their money, they will be able to save the money. So FLIP is coming in to help train them about financial literacy, how to do budgeting and savings in their groups”.

Jonah further adds, “This is the first time that such a project has come to a place like Middle Ramu and we believe that it will have an impact in the lives of the families and most importantly the children.

We hope that in the next two or three years, we will be able to see the real and lasting impact of what we’re doing here”.