Malnutrition in Democratic People's Republic of Korea (DPRK- also referred to as North Korea) is chronic.

Locals in Anju, north of the capital, guess that their food storage, stocked away from the fall harvest, will be empty by March.

The UN estimates that 70 per cent, of the nearly 25 million people in DPRK, are food insecure, relying on the Public Distribution Systems for food. The Government’s target is to provide 573 grams of cereal per person per day. However, in 2014 the average PDS ration was 383 grams. Further reductions to 250 grams per day during August and September 2014 were the lowest since 2012. The chronic malnutrition (stunting) rate among children under-five is at 27.9 per cent.

Bridging the food gap year-round for children, World Vision works in 2 provinces by providing 600 metric tonnes of wheat flour to two noodle factories and a bakery.

The noodles and bread are delivered to local nurseries and kindergartens to supplement their lunches and snacks. Communities can also make their own noodles using corn flour or whatever they produce during the year.

Stacks of wheat flour sit in the storage room at the noodle factory in Kaechon city. On a raised platform two machines run long hours each day, operated by teams of women wearing white uniforms and hairnets. They mix the flour with water in an industrial size mixer and then pour the soft clumps of dough into the box of the noodle machine.

The noodles spring from the machine, falling towards the floor, where another team member cuts handful after handful of noodles with scissors, to about 4-foot lengths. Team members walk back and forth cutting the strands and then hanging them to dry on a clean wooden stick to dry. The orderly rows of drying noodles multiply throughout the day.

When the noodles arrive at school, teachers prepare the meals for students in the school kitchens. Children receive steaming bowls of broth and noodles, sprinkled with vegetables like cabbage or carrots. On a good day they might get a smattering of bean curd or cured pork. 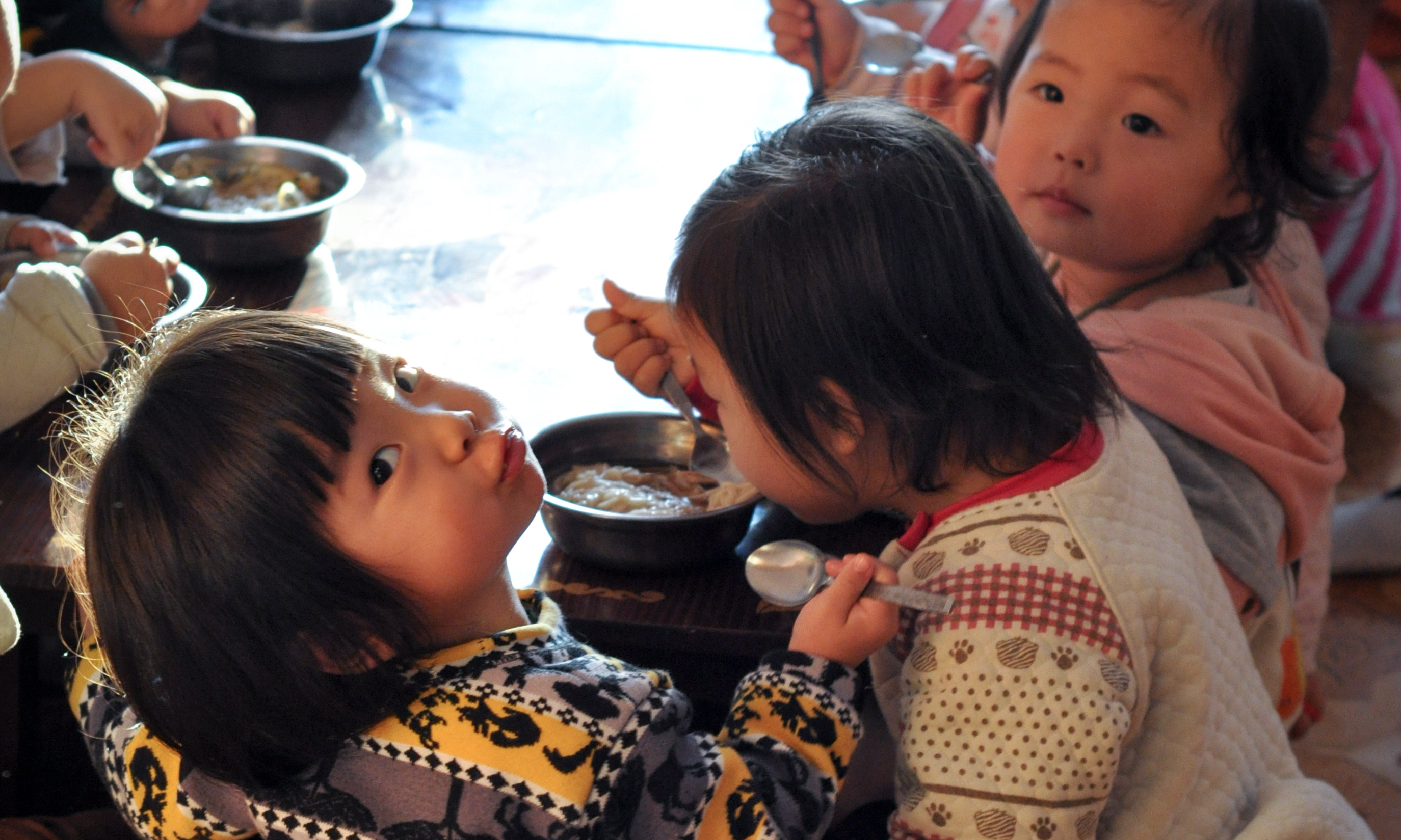 In Anju city at a government run nursery school, the children spend 11 hours a day at the centre while their parents work, normally from 8am to 7pm. They have rice for lunch and noodle soup at 3pm.

At another Kindergarten, also run by the government, Gwan, age 5, likes playtime best at school. While he noisily slurps up his noodle soup, he cheekily says he prefers rice. He sits on the floor with 4 other students around a low round wooden table. They are layered in shirts and warm coats as the biting winter cold has started.

Gwan, age 5, slurps up his noodles.

In the winter there is limited electricity so heat is not readily available in the buildings.

The school has its own garden, where it grows vegetables and herbs to supplement the rice and noodle meals.

In Kaechon city, one of the local nursery schools also raises its own pigs to provide a little meat for the children’s meals. Here students sit at long-low tables, side-by-side spooning-up the noodles and broth.

While the wheat noodles are filling and provide some nutrients, World Vision is exploring the addition of micronutrients to the noodles to help provide students with needed vitamins they lack from their limited diets.