Alerted by the rise of Cholera cases in “Les Nippes”, one of the departments affected by Hurricane Mathew, which hit the country at the beginning of October, a team from World Vision visited the community to assess the situation and plan the response to the affected population.

More than 13 cases of cholera, including one death, were revealed and more than 200 families without adequate sanitation. A breeding ground for the rising of contagious diseases such as cholera. Furthermore, the single health center "La Clinique de La Visitation" is struggling to find the necessary materials to handle the cholera cases in that area. The passage of the hurricane has complicated much more a fragile healthcare system. 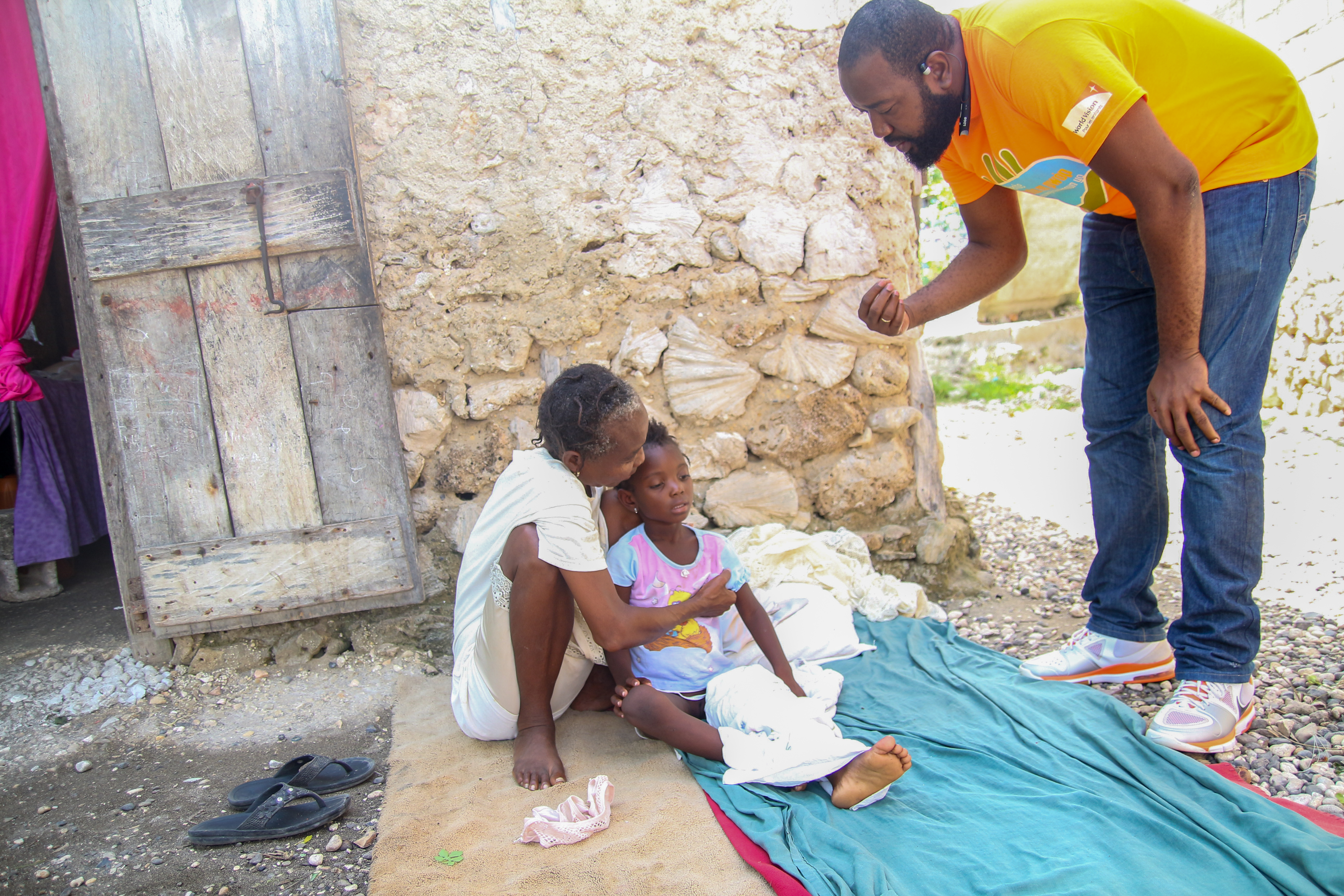 Dr. Labbé, during her visit to Julienne, reminds her of the measures and precautions related to cholera and the care to provide to Stephanie

Among the people contaminated is Stéphanie, a four-year-old girl victim of this epidemic as her grandmother Julienne François. Dr Labbé, a member of the World Vision medical team in “Nippes”, promptly recommended the hospitalization of the child and her grandmother at  “Sainte Thérèse Hospital” in Miragoâne, the largest hospital in the region, located at some 20 kilometers from where they live. An action that saved their lives!

Shortly afterwards, World Vision distributed hygiene kits, chlorine, water treatment filters, oral rehydration serum and water purification tablets to more than 300 people, including Julienne and her family, as an effort to halt the spread of the epidemic in the community.

A week later, Dr Labbé went to see Julienne François to inform about her health and the health progress of Stephanie. We found a child who has been weakened by this evil. She cannot even stand up by herself while she has been the great singer of the house according to her grandmother standing in front of the door of her little shanty where she has lived for more than 11 years. Now, the house is completely silent. The only sound comes from the waves of the sea and the cars traffic on the highway. Her grandmother, who is also recovering from cholera, is doing her best to provide her little girl's needs. 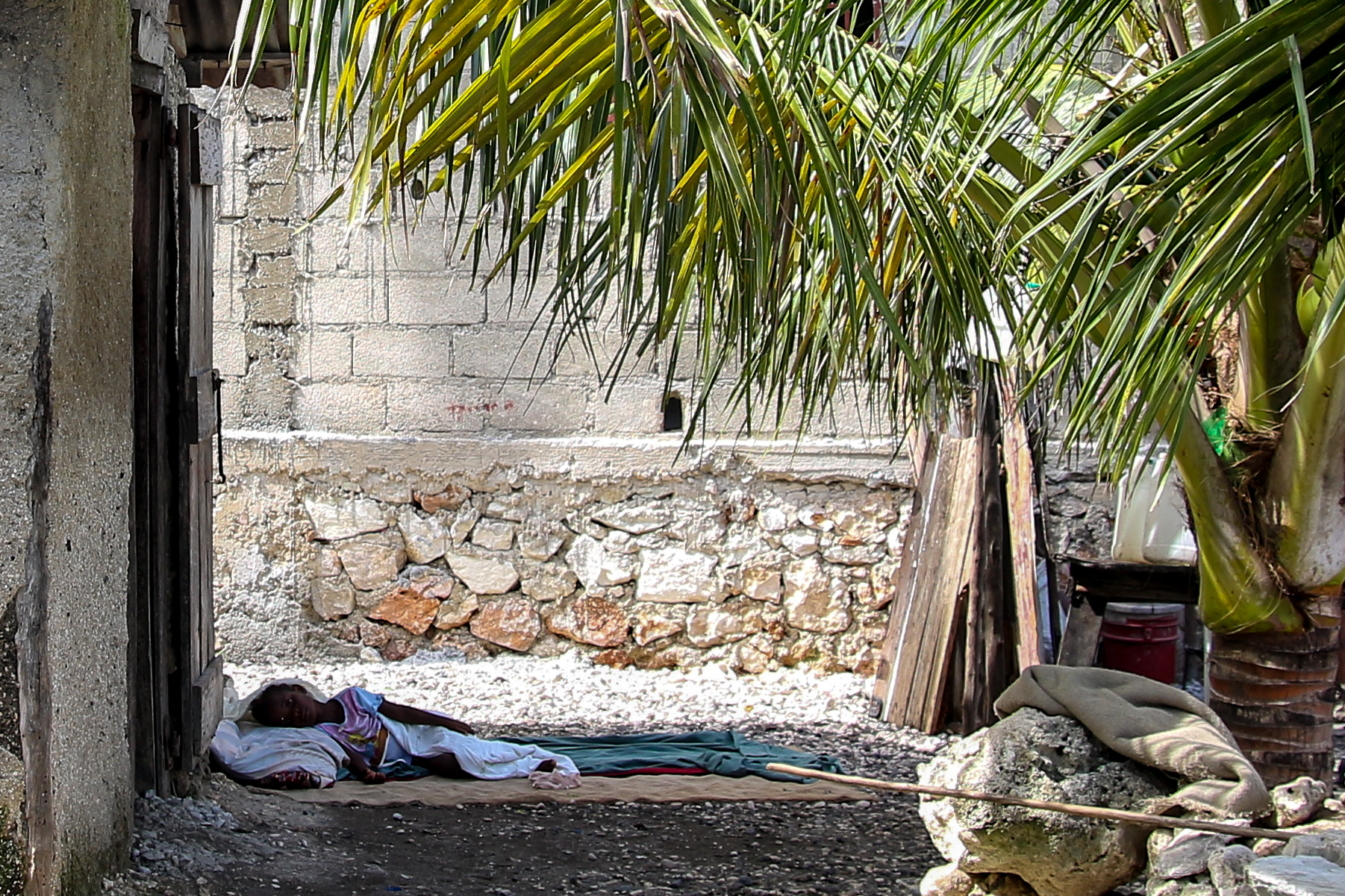 Stephanie resting outside under the shade of the palm trees

Since her illness, Stephanie cannot go to school. Awakened by our presence, she struggles to explain how she experienced the passage of hurricane Matthew: ''I was very scared. There was a lot of wind. The roof of the temporary shelter nearly broke away" she stated to us, and was unable to add other words.

Stephanie lives with her mother Ketia. But she cannot do much for her daughter. Ketia is 24 years old and has never worked in her life. Joasson, Ketia's husband, abandoned her with two girls almost two years ago. The little motorcycle taxi business of Joasson did not allow him to meet the needs of the family. Since Joasson left the house, Ketia has never heard from him. She thinks that he has gone to Brazil like many other men in the neighborhood who dream of a better future far away from Haiti.

Like the other houses in the neighborhood, Stephanie's family does not have a latrine. They do their needs in the sea, which is also the source of their daily bread brought home by Enel, Stephanie’s grandfather who is a fisherman.

Julienne, Stephanie’s grandmother, does not dream anymore at night. Her sleep is often interrupted by the waves of the sea, which come toward the house in the middle of the night without invitation. “We have not been visited by any chiefs for a long time. Our situation will never change. We have no other place to go. There is not much left of life except my grandchildren. So, dreaming is a luxury that I cannot afford”, she stated to us with a pinch of sorrow and bitterness.