What’s it going to take?

It Takes A World To End Violence Against Children Behaviour Change

“Nine years, two months and three days.” These words recently jumped out at me after landing in my inbox as part of a newsletter from the Partnership to End Violence against Children. That is how long we have to end violence against children and deliver the Sustainable Development Goals.

And to my surprise, I realised that I am not that optimistic: I am pretty worried we are not going to end violence against children in the next nine years, two months and three days unless… unless we take behaviour change very seriously and put it at the centre of all we do. Here’s why…

When World Vision started our global campaign to end violence against children, it brought a long-buried memory to the surface. When I was about 12 years old, my friends and I would talk about how our parents used to “discipline” us. There were those whose dinners were maliciously withheld, those whose parents stopped talking to them for days and weeks on end, those who were hit with a wooden spoon or with dad’s belt, those who were forbidden to play with their favourite toys or wear their favourite clothes, those who were constantly yelled at to the point of fantasising suicide, those who were cruelly humiliated in front of other children, those who were locked outside during cold winter evenings by drunk fathers. We listened to each other’s stories and we were happy that we were ‘only’ spanked or yelled at, rather than being also humiliated or thrown outside. Or vice-versa. Each of us was thinking how lucky we were to ‘only’ get the kind of violence we were already used to. None of us even formed the thought that we should not get any at all. We were brain-washed to think about ourselves as bad children who deserved all the violence we got.

Stirred by the memories, I spoke publicly about the importance of ending violence against children, sharing about my own experience. I reflected that to break the cycle of violence we need to name it, talk about it, remember it and even honour it (when it happened to us) so that we can heal it in ourselves, in those who perpetrated it against us and in wider society. To my complete astonishment, instead of sympathy (let alone empathy or compassion) people of my parents’ age (including some of their friends), were saying things like: “How I wish I had raised my children as those parents. My children are a disappointment. I should have done more for them.”

I was stunned! I was being confronted by people who think that violence against children is actually good for children! They believe it toughens them. Teaches them lessons. Makes them reason. And that’s when I realised that if we want to be effective, we need to better understand and speak to people’s beliefs. We need to put aside what we think people believe and need, and courageously investigate their real beliefs and their real needs.

World Vision’s global research at the beginning of the campaign was a key step in this direction. And our office in Romania went one step further – we conducted a segmentation study – one of the first of its kind in the world – to better understand people’s beliefs and attitudes about violence against children: 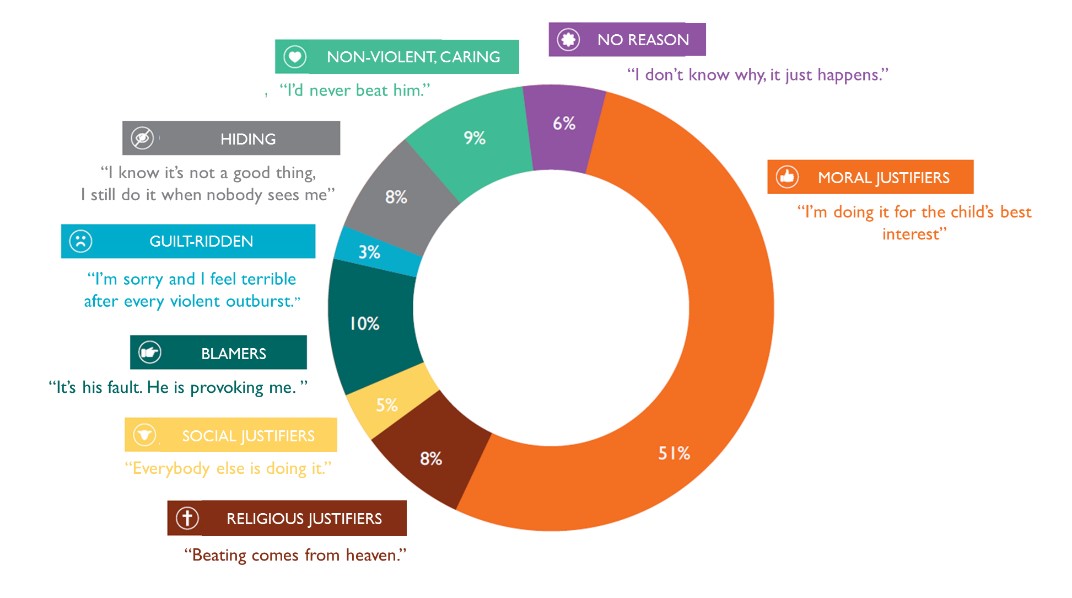 We have often hoped that information delivery will lead to changed attitudes, which in turn will lead to changed behaviours. Professor Jeni Cross says that this is one of the big myths of behaviour change, because only rarely this continuum (information delivery -> attitude change -> behaviour change) verifies. The result: more than half of the world’s children are still suffering from a form of violence.

So what to do, then? Let us look at the water, sanitation and hygiene (WASH) sector for a moment. Campaigners in this sector clearly identify a desired change – washing hands – and use a combination of instructional messages such as “Wash your hands with water and soap at these five critical moments during the day”. They know, because of research, that if people do this, they will cut the rates of child sickness, improve the survival of new-born children and so on. But once they understand the desired behaviours, WASH experts do not stop there. They conduct subsequent studies to understand why people are not washing their hands. They discover and tackle the access problem (by providing clean water and soap), and to understand and fix the action-efficacy-perception problem (educating people about why washing hands can be useful). And, as we have seen throughout this pandemic, they work with faith leaders to address belief systems.

We are using these approaches in our struggle to end violence against children, but a much larger, collective effort is needed if we are to ever realise our dream of ending this violation of children’s rights. Let alone in the next nine years, two months and three days.