Well, this is awkward. Why are we talking about menstruation?

Fun fact: every day, 300 million people around the world are menstruating. In fact, every person born female spends an average of seven years of their life menstruating.

But in communities all over the world, menstruation is still a taboo topic – and that’s a problem, because if you can’t talk about, you can’t address the realities that girls everywhere face in managing their menstruation.

The result is that millions of girls have to struggle against a stack of serious barriers to their health and success. And that’s an issue for all of us, because when a big swathe of the population can’t contribute to their fullest, it holds back communities’, nations’ and the world’s economic and social development.

I still feel awkward. Is being able to talk about it really such a big deal?

Imagine you had a runny nose. Annoying, but not a big deal. But now imagine that the mere reference or sight of mucus freaked out your whole community and forced you to hide away in shame for as long as your nose runs. And then, imagine tissues are nowhere to be found, or so expensive they are way out of reach. Imagine they are also ensconced in cultural shame, and it’s completely unacceptable to talk about tissues. Imagine having to tear up old cloths or use leaves for tissues, blow your nose in hiding and wash your nose-cloths in unsanitary conditions. Imagine having a really runny nose at school, where anyone who notices will mock you or exclude you, and there’s nowhere private to deal with your running nose. Would you go to school?

We’re not really talking about noses, are we?

Nope! Menstruation is a natural fact of life and a monthly occurrence for 1.8 billion people around the world. But worldwide, 1.2 billion women lack access to basic sanitation – things like toilets, water taps, and sanitary items needed to manage their period. This problem isn’t limited to the boundaries of the developing world; period poverty is very present in the developed world, too. In the UK, it is estimated that around a quarter of women struggle with period poverty.

You’re right. Many women without access to menstrual products improvise with old blankets, chicken feathers, old rags, newspapers, leaves, mud, and even cow dung. Odours and leakages as well as a lack of private toilets at school to manage their periods can comprise a massive challenge for girls.

Poor menstrual hygiene can cause physical health risks and has been linked to reproductive and urinary tract infections, according to UNICEF.

Period shame has negative mental effects as well. It disempowers women, causing them to feel embarrassed about a normal, biological process. Stress, anxiety and indignity caused by stigma about menstruation can have a catastrophic effect on girls’ confidence and stop them from reaching their full potential.

16-year-old Womba in Zambia says she regularly used to miss school because there were no clean toilets which made her feel uncomfortable, especially when she had her period.

“As girls, you would miss lessons because you would be scared to mess yourself up,” she says.

Gosh. Like it's not hard enough to be a teenager!

Exactly. Girls in communities with menstruation stigma often experience discomfort and distraction as well as missed days of school when they are menstruating. This makes it harder to learn and leads to a higher chance of dropping out of school altogether, cutting them off from reaching their full potential.

Not completing school makes it harder for these girls to enter the job market and if they do, they find themselves in low pay jobs without security, predisposing them to economic and social poverty.6 Young girls who do not receive an education are more likely to enter child marriages and experience an early pregnancy, malnourishment, domestic violence, and pregnancy complications as a result.

Got it. School is really important.

It certainly is. Educated girls grow into women who are empowered to care for themselves, their families, and their communities. Evidence shows that enrolling and keeping girls in school gives them the potential to earn better wages, raise healthier and more educated children, and have a voice in their community. This results in stronger economies, more peaceful nations, and more equitable systems.

Lost educational opportunities for girls cost countries between US$15 trillion and $30 trillion in lost lifetime productivity and earnings.

Access to timely, factual information about puberty and menstruation leads to increased body literacy, a healthy public perception of menstruation and decreased stigma and shame. We’re starting conversations like these among community leaders and families all around the world so together, we can destigmatise biology and get started on tackling the menstruation management problems girls face.

Right now, child sponsors are partnering with communities on action to break down the barriers for girls, including:

When you invest in a girl, the dividends are immeasurable. You can help give a girl the confidence to study, have her dream career and transform her community. Sponsor a girl and help break the cycle of poverty caused by periods. 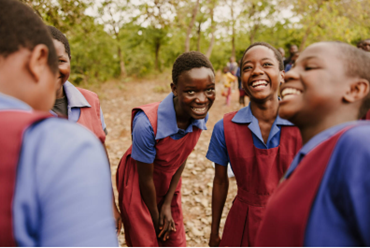