The warm glow from a candle exposes beads of sweat on Binsa's face. The room has no electricity or windows and is dark even though it’s the middle of the day. Outside, the temperature is 35 C°, the humidity is at 90 percent. The sultry heat is harsh for her little body, but it’s not unfamiliar for the 5-year-old and her family.

"We get very little sleep," says Binsa’s mother, Lakshmi, with a nonchalant shrug at the suffocating heat. She is squatting on the floor as she prepares food. They don't have a separate kitchen, and the makeshift shelf under a table is where they keep most of their food supplies. Most containers are empty.

Binsa lives in this one-room house with her mother, Lakshmi, and a 19-year-old step-brother, Akhil. Her sister Piya, who is 13, lives in a boarding house run by a charitable trust. The room has just enough space for a bed and a table. Her father's clothes hang on a clothesline in the room.

He passed away ten days back. The clothes are a reminder. Tuberculosis took him away, and Lakshmi and her children are still grieving the loss.

"We don't have a single photo of him with us. There is one photo of him, and it is with Prem bhaiya (brother)," says Lakshmi, pointing towards the owner of the brothel where she works as a sex worker.

Binsa follows her mother everywhere except when she is working. She doesn't understand the nature of her mother's job yet. She is a bubbly child with bright, beautiful eyes. She likes to spend time at World Vision India's Child-Friendly Learning and Recreation Centre (CFLRC). Here, she gets to learn, draw pictures with crayons, interact with other children, and enjoy some snacks. This is Binsa's most joyful place.

“I enjoy learning and the snacks that I get at the centre. I want to attend school,” says Binsa. She can write the English alphabet and count up to 10.

Binsa is yet to understand the challenges and discrimination hurled towards children of the red-light area. Lakhsmi foresees this but dreams of a better life for her children. That pursuit had a setback during the two phases of COVID-19 lockdowns in 2020 and 2021. With the lockdown putting restrictions on daily activities, most people employed in the informal sector lost their jobs. Lakshmi struggles to get food on the table.

"Since the lockdown, I have been struggling to earn even Rs.100 a day (US$1.37). I had no clients due to the lockdown. I borrowed money to buy food and took credit from the shopkeepers. I could do with one meal a day, but the children have to eat," says Lakshmi. They live from hand to mouth, one meal at a time.

Already debt-ridden from the slow business and her husband’s treatment, Lakshmi still has to pay a monthly rent of Rs.1000 (US$13.66). She also gives half of her earnings to the brothel owner. “If I earn Rs.200 he gets half of that. It’s a 50/50 deal,” she says in a matter-of-fact tone.

Lakshmi is grateful to World Vision India for the help they received during the two COVID-19 lockdowns. They were one of the beneficiaries of dry ration distribution worth Rs.2200 (US$30) provided to 354 families in Siliguri red-light area. This was the fourth relief response World Vision India has done since the first lockdown in 2020.

"I’m stuck in the red-light area, and I can't change that. But I want my children to move out from here and have their own life," says Lakshmi. She especially worries about her two daughters because she knows how unsafe and vulnerable the area is for girls.

“Children in the red-light area are exposed to adult sexual behaviour from a very young age. The mothers sometimes entertain their clients at home, and children witness that,” says Amos, a World Vision India staff, working in the area.

Lakshmi started attending the mother's meetings organised by World Vision India two years back and learned about child protection issues and the importance of education. Initially, she was sceptical about sending Binsa to the CFLRC. She could not see a way out of their situation. Children from that area had very little chance of escaping what seemed to be their destiny, and most accepted that without a fight. But she now wants her children to attend college and get respectable jobs. She sees education as the only way out.

“My children had no place to play earlier. When I had customers, I had to send them out on the streets. Now they can stay at the centre, and I feel safer for them,” says Lakshmi. 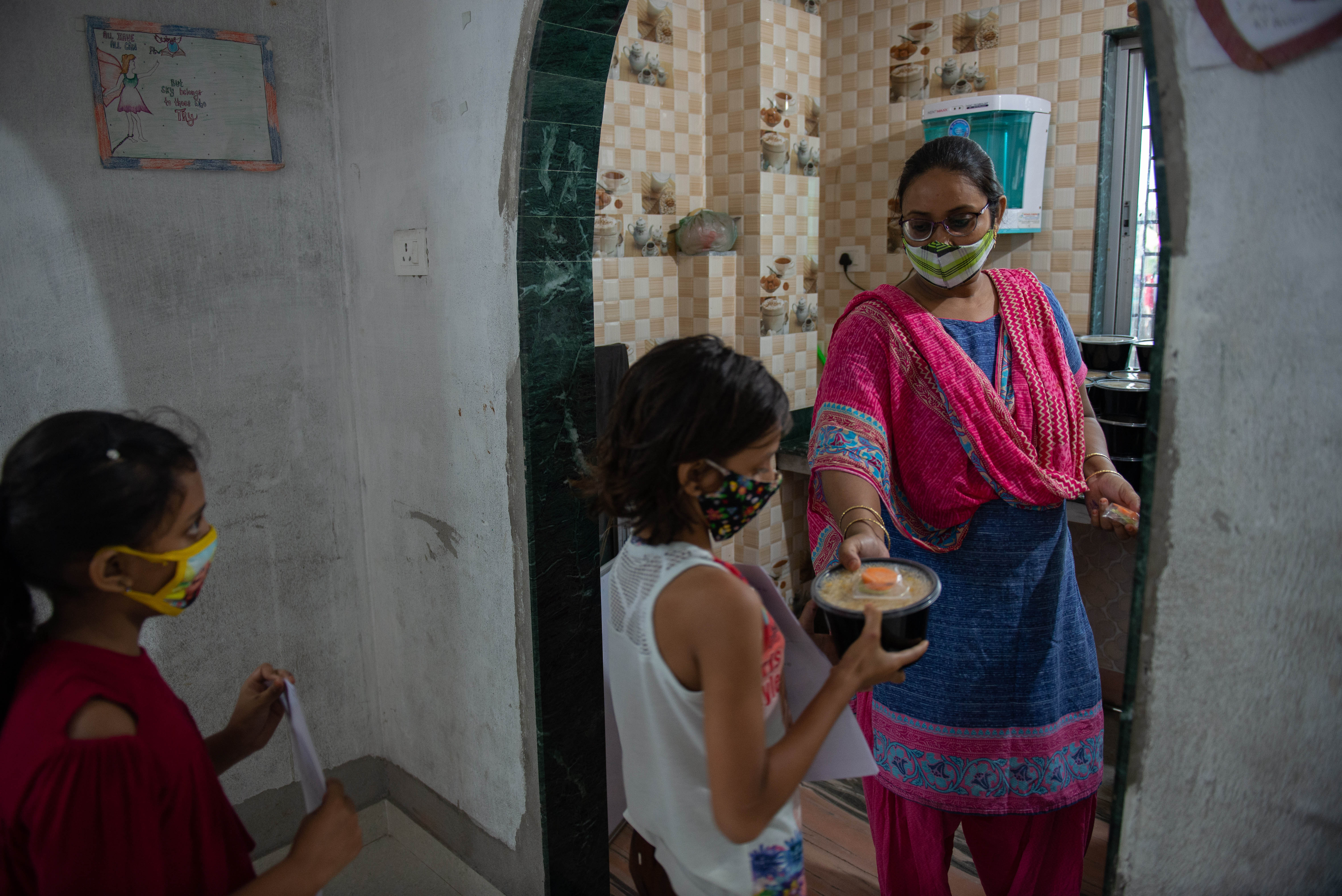 Today Binsa is one of the youngest to attend the CFLRC. World Vision India has three centres in Siliguri red-light area. Since the lockdown, the number of children attending these centres has almost doubled from 240 to 462.

"When mothers solicit customers to earn their daily meals, hardly does any child have a separate space at home,” says Jyoti, a World Vision India volunteer at Siliguri red-light area.

“This centre offers them a safe place to play and engage in fun activities and learning. We give them a worksheet to complete, and when they come back the next week, we give them a new one along with the corrected worksheet.”

The children eat nutritious food as well. “This has been a great help for the community during the lockdown as many children couldn’t afford to get decent meals during that time,” says Jyoti. “Sometimes, the whole family shares the food package we provide at the centre.”

World Vision India will help Binsa enrol in school when the next academic session opens. There are many challenges in enrolling children from the red-light area in schools. Most children don’t have legal fathers making school admission an uphill task. Further, many children, including Binsa, don’t have birth certificates, which the school forms require. Yet, this year alone, World Vision India was able to enrol 11 children in school.

"I’m illiterate, and I don’t know how to get the documents needed, so without World Vision's help, it will be almost impossible for me to enrol Binsa in a school," says Lakshmi.

Jyoti, 22, one of the first girls from her community to attend college, has observed major changes in her community since World Vision India started working here in 2018. There were very few school-going children then. “Nowadays, most of the children from the community are in school. We have youths from this area attending college for the first time, the first generation of graduates from this community,” says Jyoti with a sparkle in her eyes.

In the last couple of months, World Vision India has sponsored 31 youth from the community for a beautician course at a reputed institution, and 15 women have joined tailoring classes. These vocational training courses are part of the skills development programmes, to allow them an alternative livelihood. Binsa’s step-brother, Akhil, joined a driving class sponsored by World Vision India.

“After this, I want to find a job and stand on my feet. I want to look after my mother and sisters. I want to help my mother so that she can leave this profession. My dream is to build a house and take all of us away from here,” says Akhil.

World Vision India has also given Economic Development Assistance (EDA) to more than 50 most vulnerable families. The EDA programme will help start small businesses like tea stalls, petty shops, and vegetable vendors. At the Siliguri red-light area, World Vision India is working with 462 children in 354 families.

Siliguri has the second-largest red-light area in West Bengal. The city is wedged in between four countries: Bangladesh, Nepal, China, and Bhutan. It also connects mainland India to many Northeast Indian states. The city is a commercial and transportation hub, making it a hotspot for the human trafficking nexus. According to National Crime Reports Bureau 2016, West Bengal has the highest cases of human trafficking. The state alone accounts for 44.01% of the national human trafficking reports.

World Vision India was instrumental in setting up Anti-Trafficking Network (ATN) at Siliguri in 2011. At present, 17 NGOs are part of ATN in Siliguri, North Bengal. ATN does advocacy on anti-human trafficking and works with the local police, Child Welfare Committee, and the West Bengal Task Force at the State level. Up till now, 17 children have been rescued from trafficking. The effectiveness of the ATN in stopping trafficking has inspired the other NGOs to set up Anti-Trafficking Network in South Bengal. ATN members are also part of the district-level advisory board on anti-trafficking.

At 15, Lakshmi was brought to Siliguri by a friend with a false promise of a good job but was sold into sexual slavery. Since then, the Siliguri red-light area has been her home. “World Vision has made a huge difference in our lives. Binsa is fortunate to get all this help,” says Lakshmi. She says she sees the transformation in the community since World Vision India began working in 2018.

Binsa makes sketches on plain paper and runs to her mother’s lap. She lifts the paper for her mother to see. Lakshmi has a smile on her face as she listens to Binsa talk. 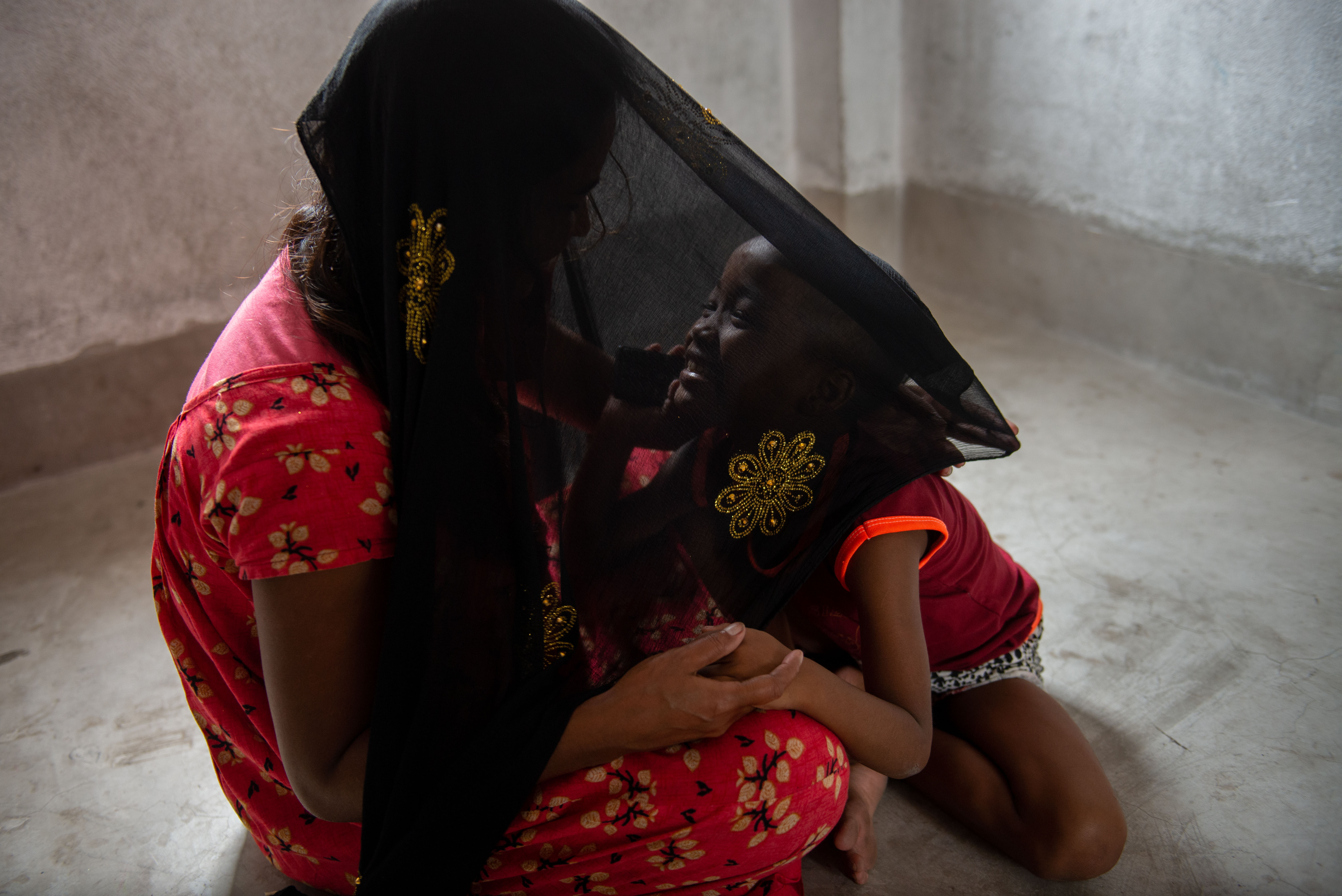 “I want my children to have their own life, not this life,” says Lakshmi, as her eyes scan the rugged walls. Just like the dimly lit room, her life has been a claustrophobic one. Binsa is a ray of hope in that sea of darkness. When asked what Binsa wants to be when she grows up, she promptly replies, “Police officer!” Her mother’s face lights up with a smile. She knows that education is the only way to make that dream come true. They still have hope.

* Names were changed to protect identities.

Story and photos by Jim Kasom