"I don't know if it's post-traumatic stress, but my grandmother is currently suffering from a stiffness in her neck which is causing her a lot of pain. Sometimes, unable to bear it any longer and she faints. Very recently, she was rushed to a health center after she lost consciousness. I know that Clarisse was never in good health, but since the earthquake, her situation has simply worsened," says Misslove, her 19-year-old granddaughter.

“I didn't use to pass out from the pain in my neck," Clarisse replies as she heard Misslove speaking. "When I lose consciousness," she continues, "it is often because of hunger. It's a kind of weakness that takes hold of me and obstructs all my sight before falling, concludes the octogenarian.”

Clarisse is an 87-year-old widow and mother of five children. She lives in Renard, a locality of La Plaine, Haiti. Like all the inhabitants of the Nippes department, she and three of her 16 grandchildren went through the traumatic experience of the earthquake, which severely rocked this region on August 14, 2021. Fortunately, she came out of it safely as well as the children who were staying with her. Nevertheless, Clarisse lost her house which had been left to her by her husband who died more than 20 years ago.

“I saw my whole life wasted that day.,, When I got home, the force of the tremors knocked me to the ground," she says. 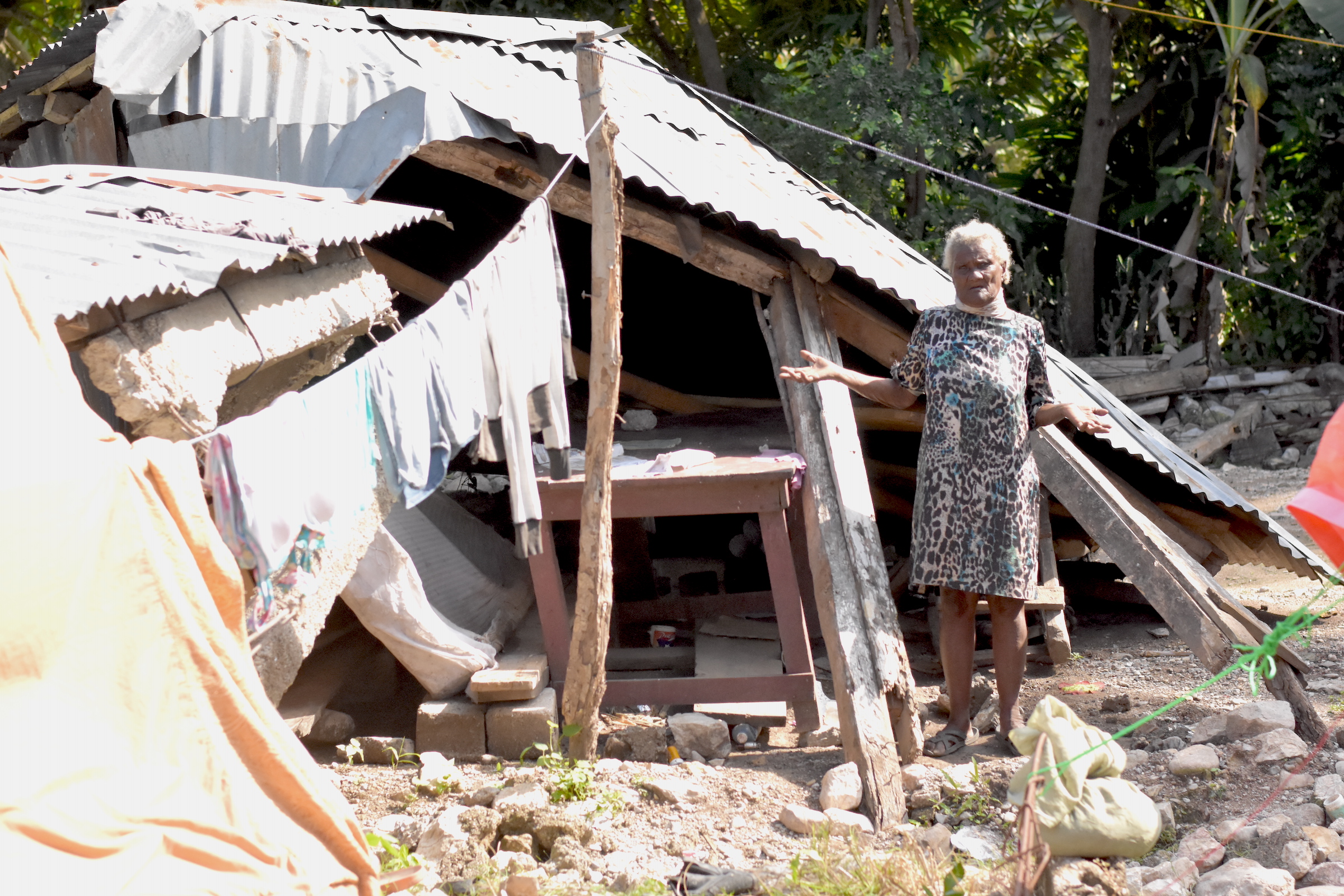 On the evening of the earthquake, Clarisse, having had no other option, had taken refuge in a small wooden kitchen in the courtyard. Everyone could easily see that she slept badly after the earthquake hit. But, paradoxically, this does not constitute the greatest evil for Clarisse, nor the collapse of her house. Her greatest evil has always been her severe lack of food.

Clarisse is nourished badly. She has experienced this situation since before the earthquake and it worsened afterward. She only eats when she manages to sell from her small charcoal business or when one of her children is able to help her. Clarisse knows how to go up to two days without taking anything. Resisting hunger is her daily share. And, when everything gets upside down, she suddenly plunges into unconsciousness.

“I sell charcoal. That is the only thing that keeps me standing because it is the only way to get to eat. Everyone knows that I sell charcoal at home. They come to buy when needed. When I manage to sell a pot for 50 gourdes, that's enough for me. When I sell for 100 gourdes (1 US dollar), it's even better. But, whatever the eventuality, I live with it. Sometimes I eat all the money I made," she says, with a beautiful smile. Afterwards, if the children do not collect funds to buy me the bag of charcoal or to be able to feed me, I stay without eating anything,” explains the grandmother. 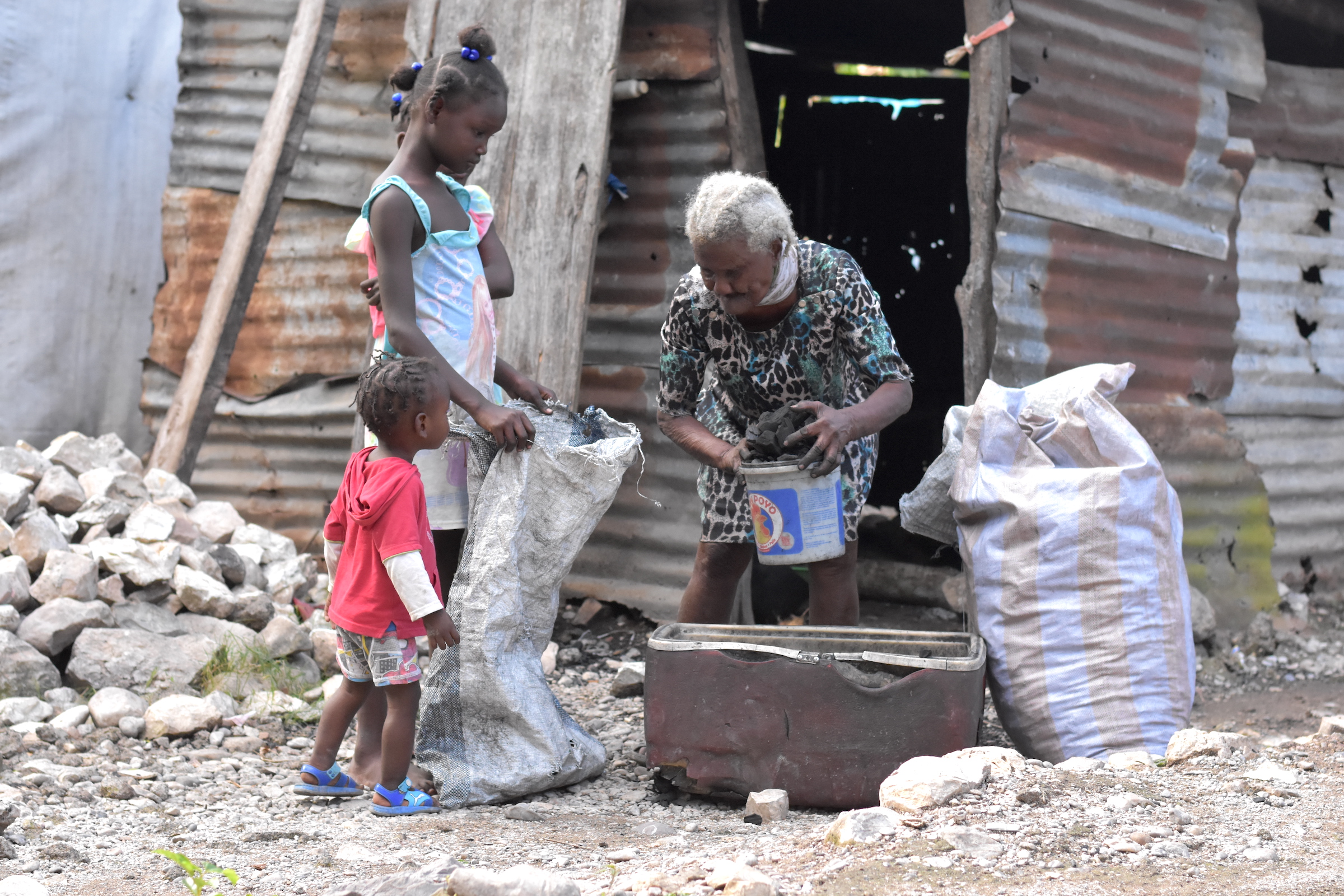 “I used to be able to plow the land well and on my own. It was an obligation because I had to take care of my 6 children at the time. I knew how to grow bananas, dig up taro crops, pull watercress, and take them to market. I've been wringing my neck lifting and moving heavy goods. But now the strength has left me. I can no longer work the same way, which is why my situation is so difficult,” says Clarisse.

Having been a target of World Vision's assessment survey after the earthquake, Clarisse has benefited from two distributions of a complete food kit including rice, peas, spaghetti, flour, corn, and the ingredients needed to prepare food.

“It is for the first time that I have benefited from something since this disaster, said the eldest of the Brisson family. I bless World Vision. Everyone had denied if I was hungry, but World Vision thought of me without being called by me. I say thank you. Big thank you to everyone who contributes to this donation. God will not let you without blessings for this beautiful gesture,” concluded Clarisse. 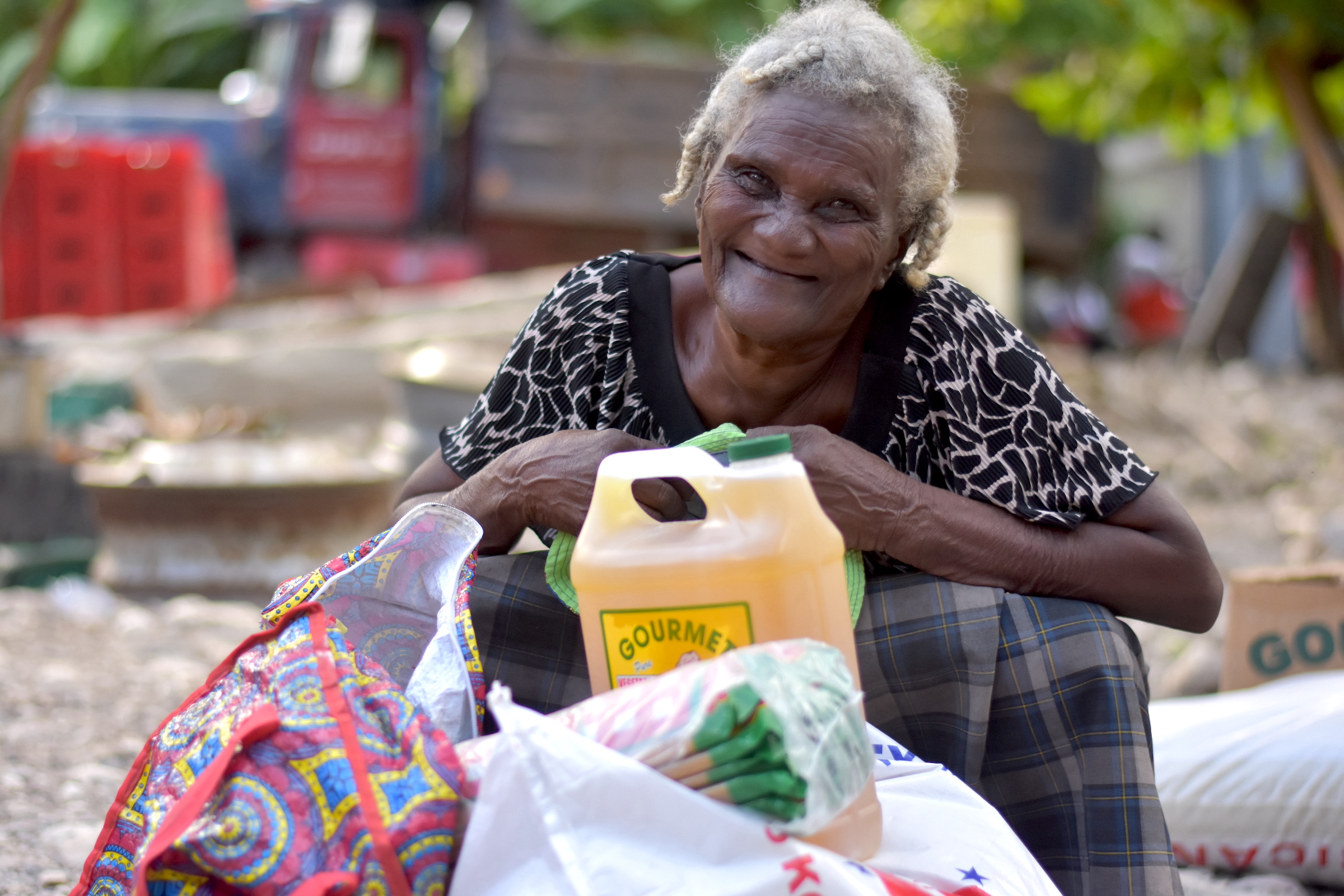 Clarisse says she falls no more since she started not going a single day without eating. The worries caused by the lack of food are now outnumbered her pains in the neck.

“I eat rice almost every day. This has been my favorite dish since my childhood. I prepare it on my own. When I don't feel the strength, my children or neighbors come and support,” she confides.

World Vision’s intervention, through the use of food vouchers, has greatly benefitted and strengthened the local economy by boosting the transaction of small traders. The latter have been contracted to massively sell their products to the beneficiaries and thus make greater income in record time, whereas in normal times they could have sold them in slow motion. They sold food to more than 20,000 beneficiaries in the Nippes, at a profit of 300 to 500 gourdes per unit, or up to 5 US dollars. A real opportunity offered by World Vision to sellers to grow their businesses.

Clarisse's case only gives a small idea of ​​World Vision's overall intervention in Baradères and Nippes in the context of the earthquake response. In such a situation, the organization provides immediate relief during the emergency but works at the same time to recover the beneficiaries over a longer period. Intervening in five areas including: L'Asile, Petit-Trou des Nippes, Baradères, Saint-Louis du Sud, and Cavaillon, World Vision has supported, as it was able to do for Clarisse, more than 68,000 affected people with the full package of humanitarian aid since the quake hit. It distributed food vouchers, hygiene, and water treatment kits, SHELTERS, sleeping and cooking items among other Non-Food Items to nearly 19,000 people. The organisation also distributed school kits to 3,278 schoolchildren across 29 schools; provided psychosocial support to 923 people, including 367 children, through support groups and formed five committees to oversee child protection in localities; It screened 2,081 children for malnutrition through muster stations and dewormed 39,482 others through their schools.

With regard to the recovery of the most vulnerable, World Vision has trained 5,123 children's leaders through various activities and media with the aim of leading them to real behavior change and adopting better practices, in nutrition, hygiene, and sanitation. It is currently building 3 national schools, each with 9 classrooms with a capacity of 40 students each classroom. And, it is also building seven Child-Friendly Spaces (CFS) out of the 15 set up and equipped with portable libraries for play and psychosocial activities impacting the lives of approximately 5,000 children still living with the after-effects of trauma. Finally, it is building a health center to strengthen health care services for children in the commune of L’Asile.