Sponsored child, Isabelle, is absolutely thriving in the Kisaro Area Programme in Rwanda, thanks to her sponsor in Australia, as well as a new cow, and a World Vision-built 6.8 kilometer long pipeline that benefits nearly 6,000 people in 14 villages, including 481 registered children.

Her parents, Thacien Utazirubanda and Vestine Mukamukwiye, are from this area. They have been married since1999. During the war of 1994, they went to Kigali, but when the battle changed directions, they fled to Gisenyi, in northwestern Rwanda.

Thacien is a proud father. He says that Isabelle, his oldest daughter, was first in her class from Primary grades 1-6. Now , attending a more challenging school, she remains one of the top five students in her class.

The installation of a water pipeline in the community has been life changing. “Before, we used to fetch the flowing water,” Thacien says. “We had unbalanced health and regular sickness. When I washed my white shirts, they would turn gray. We often used to be checked for worms.” In the last six months, Thacien's family has not had to visit the hospital. “The children used to feel sick,” says Vestine. “No child goes to the clinic now. We are drinking clean water. I no longer see people going regularly to the water. We know it’s World Vision that has enabled us to get this. I attribute my happiness to World Vision.” 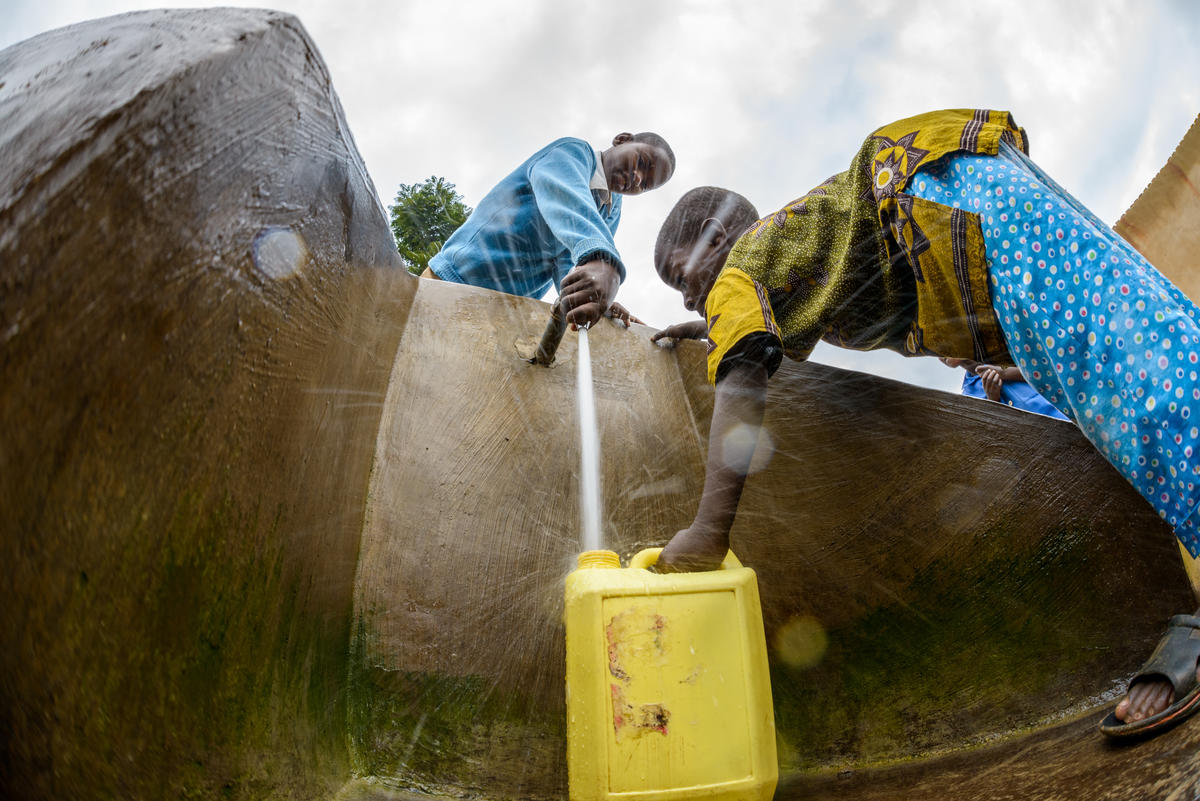 Vestine says that not having enough clean water was also detrimental to their basic hygiene. “Because we are farmers, we have to have at least enough water to wash our feet before going to bed. It was difficult to make sure we had enough water for that.” World Vision’s new pipeline tap is only three to four minutes away on foot. “It’s clean,” Vestine says. “You can see how clean it is. We enjoy this. Now we drink a lot of water.”

The family used to have to bathe with dirty water, says Thacien. “Now my children look pretty. They are neat. They are smart. They have time to study. They are never sick. Even our Friesen cow doesn’t get worms from dirty water anymore. Now even our cow is healthier.”

The couple lists other improvements in their lives, brought about by World Vision's Area Development Programme. “We had a grass house before,” says Vestine. “World Vision gave us iron sheets. It’s still progressing. World Vision took me out of poverty. They gave me a cow.” The windows of the house, which now are made of cardboard, will soon be getting glass windows to better keep the rain out.

Thacien took training in good farming practices, child protection, and business and investment. He kept copious notes from each training. “All these changed my mindset,” he says. The family gave their first calf to a neighbor and have a certificate for being part of the Pass On program, sharing their resources with other community members. “Now we farm on time because we have cow dung.” Their youngest son, Emmanuel, loves to drink milk in the morning.

“I really attribute all my success to World Vision,” says Thacien.

He was trained in creating nursery beds to grow carrots, cabbages, pumpkins, and other greens. He grows passion fruit, corn, and potatoes. “My crops are great, all because we learned improved farming.” The couple also took Celebrating Families training.  “We have a lot, thanks to World Vision,” Vestine says.

Vestine, like Thacien, is proud of her daughter Isabelle. “I realized she was bright from the first primary year. She was the top student in class.”

When Vestine was young, she only attended school up to primary grade 4 in school. She says her parents didn’t support her education with school supplies, and she preferred tending to the animals. “I thought raising cows would be more satisfying for me.” Now she watches Isabelle study hard and plan to become a medical doctor. “I believe in her that she will study and graduate and help our family.”

Vestine believes in all of her childern so much, and recognizes their different strengths. Her second daughter Beatrice is athletic. “She likes sports, especially handball.” Her son Kizito “is always distracted by the soccer ball. He doesn’t even ask permission—he just goes and plays,” Vestine says with a chuckle. At the time of the interview, he’s off playing. Their youngest son, Emmanuel, is creative. He likes building things outside, like small houses; he watched his dad build their house and imitated this with his own creations. Emmanuel once saw a plane fly overhead, and now has dreams of becoming a pilot.

Clean water will have a far-reaching impact on the children’s lives. “They have the opportunity to go far in school,” says Vestine. “I will push them to keep studying. My children seem to be living a more advanced life than I had. Also, they are more social—they talk and joke around with me and their father before bed. I didn’t used to do that with my parents.”

The family goes to a Catholic church. They read the Bible and gather for morning prayers.

Isabelle is a poised teenager with a sweet smile. She says that being top of her class “gives me confidence to keep studying and someday go overseas. I would like to go to Australia.” Perhaps no coincidence, Australia is where her sponsor lives. Her sponsor has been supporting her since she was three years-old. She sends him letters at Christmas. “In his letters, he says, ‘Keep studying.’ I like the photos he sends. He said he would like to come visit sometime.”

Isabelle does homework for at least an hour every day, but when she’s not studying, she likes to play handball or jump rope with Beatrice.  She describes her community: “Kigogo is a nice place, with good security, and the people love each other.” She is glad for the new water tap. “Clean water protects us from diseases. It’s healthier. Before, I was often sick.”

Isabelle’s favorite story in the Bible is the story of Daniel and the lions. “He came out alive because God protected him,” she says. “That means for me, that wherever I am, I know God will protect me.”

Isabelle is one of our many sponsored girls who have brighter futures now because of clean water, and because of the ability to go to school and to dream of a brighter future with families that support them. Learn more about the Thousand Girls initiative. 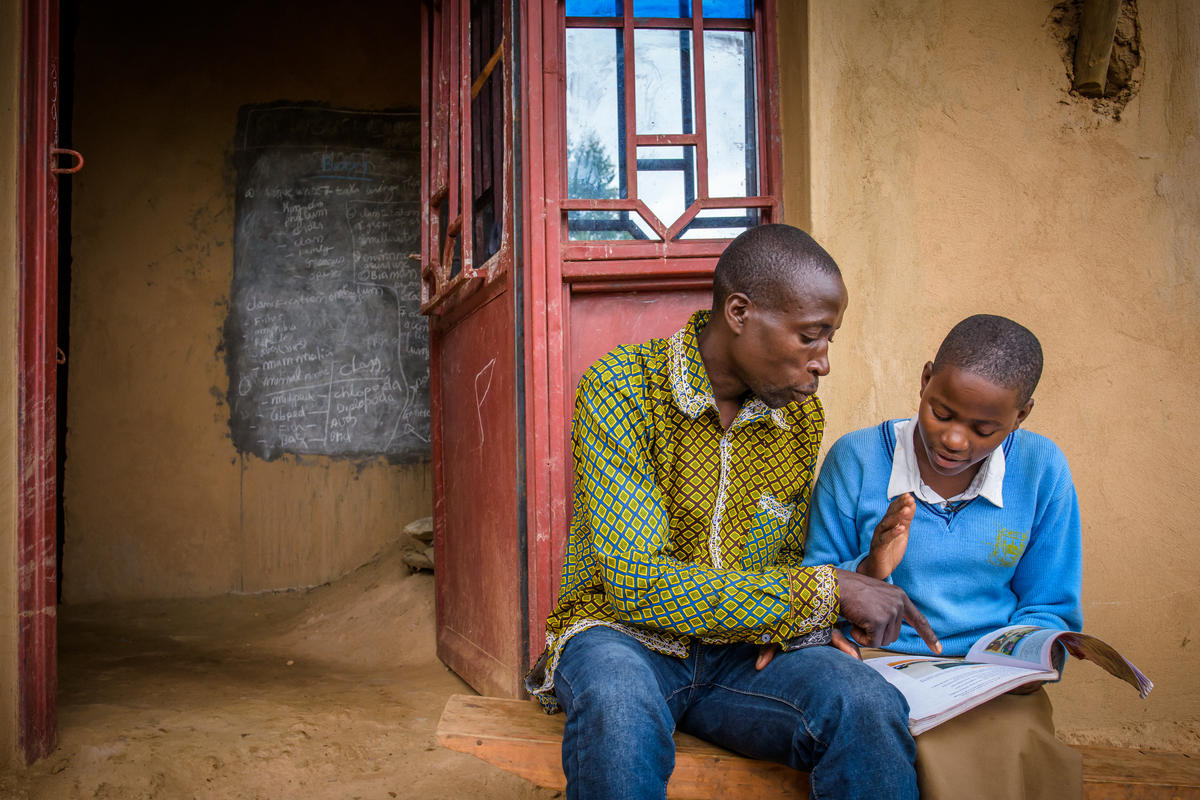