“Teenagers these days are affected with so many issues, and we have to be able to communicate clearly on issues about our bodies, so they understand and abstain from doing things they’re not supposed to do”, says Theresa.

When she was young, specific topics of taboo were forbidden by her parents and society because of traditional beliefs and customs.In Papua New Guinea, one of the most common taboo is surrounding food prohibitions during pregnancy, but this varies from one ethnic group to another within the country.

A study suggests that these taboos are associated with different stages in a woman’s life such as menstruation, pregnancy, childbirth and breastfeeding.

It also found that although these taboos have been practised since ancestral times, there is still no justification on why people embrace and practice these particular food taboos.

Often, a justification for such practices is either functional or symbolic but still lack basis and is blamed on psychosocial factors giving birth to such taboos.

Most of these taboos prohibit pregnant women from consuming mostly food that contains protein which is needed by both mother and child. This prolonged practice of such has resulted in a high rate of maternal and child mortality rate, or if the child survives, he or she grows up stunted.

World Vision intervention through the Caring for Nutrition project where Theresa is now part of, as a volunteer in her community to break such taboos by using the knowledge she has gained through the training we provide.

Theresa from Gabi village in Port Moresby was among thirty - six participants who received Certificates of Participation after two weeks of training on how to become Village Health Volunteers (VHV).

She said a highlight of the training is that she realised that taboos should stop if we are to educate the younger generation, especially on women’s health issues.

The training covered topics such as, being a better volunteer, learning about health, safe motherhood; healthy children and self-health care.

She said, “This training has taught me how to break taboo barriers because of our health, healthy living for our children and the community as a whole”.

The VHV initiative of the National Department of Health (NDoH) is implemented by World Vision under its Caring for Nutrition (CFN) Project in partnership with the National Capital District Provincial Health Authority (NCD PHA).

Theresa said, “The partnership between World Vision, The National Department of Health and the NCD Provincial Health Authority and other stakeholders will improve and empower us to do our volunteer work in our communities”.She is grateful for the partnership and hopes that other stakeholders will also support these volunteers as a way of boosting their morale in knowing that they are not working alone but have support.

“Some issues have a stigma attached, disbelief and unbelief that we have to break through to do our work for the wellbeing of our communities”, shared Theresa.As one of the oldest participants in the training, Theresa has more spirit of learning and helping her community improve.

She added, “I’m 65, and I feel that I should empower other older women to share our experiences with younger women so they can be empowered and we can all move forward”. 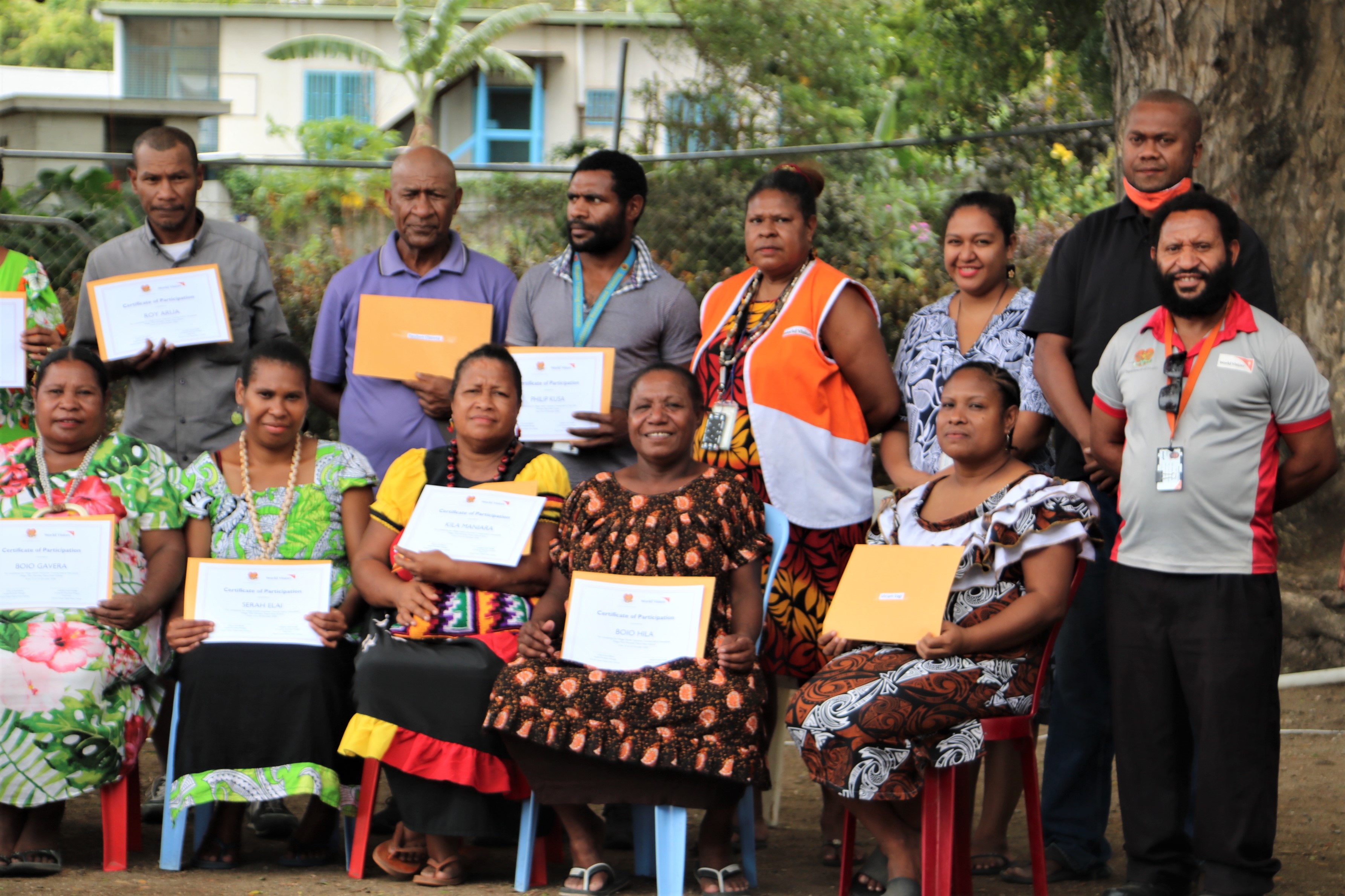 Philip Vagi, the Technical officer for the VHV Program with the NDoH said the program is a community-based initiative designed to train people at a community level to equip them with basic health knowledge.

He added, “This is for the volunteers to go back to their communities and educate individuals, families and the community about their health and to be self-reliant”.

He said that everyone must take ownership of their health and be able to manage it.

“We have found that our health statistics have not improved, so we have to go right down to the community level and empower people to be responsible for their health and to look after themselves”, said Phillip.

Rhonda Tisap from the National Capital District Provincial Health Authority (NCD PHA) said that the NCD PHA has health clinics established around the city but none in settlements and local villages within the city. Having these volunteers will significantly assist in their work to reduce the increase in public health issues.

She added, “We would like to thank World Vision for implementing this program and training volunteer’s because they will represent us in spreading health messages to the public”.

The VHV graduation is the third batch of participants who have been trained on how to assist women, children and men in their communities, especially mothers with young children and to provide advice and guidance on nutrition.