An estimated 30,000 people living with AIDs in Papua New Guinea are yet to be given counselling, tested and put on anti-retroviral treatment.

One of such is to train people who were once sex workers and those of diverse sexual behaviours and those with multiple sexual partners (polygamy); both men and women to reach out to others like them to provide counselling and the option of testing and providing access to treatment.

“I feel that I have learnt a lot in this training, and this has built my capacity to do my work”, says a CFO who received the training with support from the Government of Papua New Guinea through NDoH. 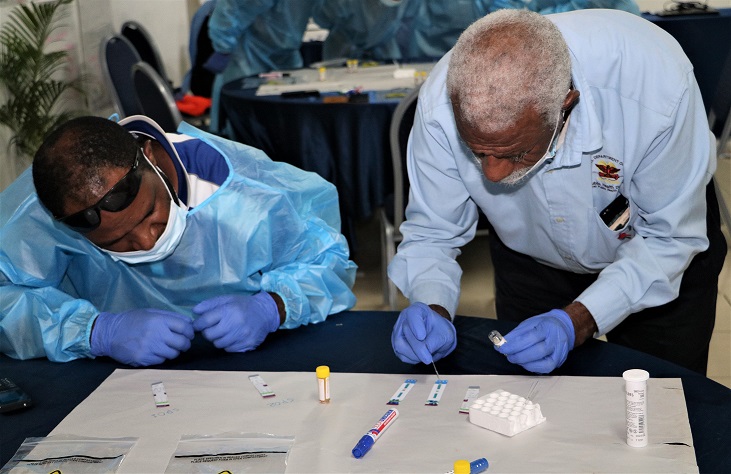 Anna (not her real name) was once a sex worker but left her past life to work as a CFW.

CFW’s like Anna have the role of identifying people living with HIV within their target communities and referring these people to Voluntary Counselling and Testing (VCT) Clinics for HIV & STI Testing and Counselling and Treatment. They are also required to gather statistics submitted to the National Department of Health (NDoH) and donor partners.

The current group of CFO’s & CFW’S are focused on people with risky sexual behaviours and those of diverse sexuality coined as the Key Population.

The Key Population (KP) covers male and female sex workers (MSW) and (FSW), transgender women or (feminine men and boys) (TG) and men who have sex with men (MSM).

“As I go out to do my work, I will make sure to encourage other KP’s to change their lives and look for opportunities to learn and improve themselves”, says Anna (former sex worker)

She adds that there is always an opportunity for anyone to move forward in life despite their past, as she has done.

“I will continue to speak on improving life where this is always change and opportunity.” 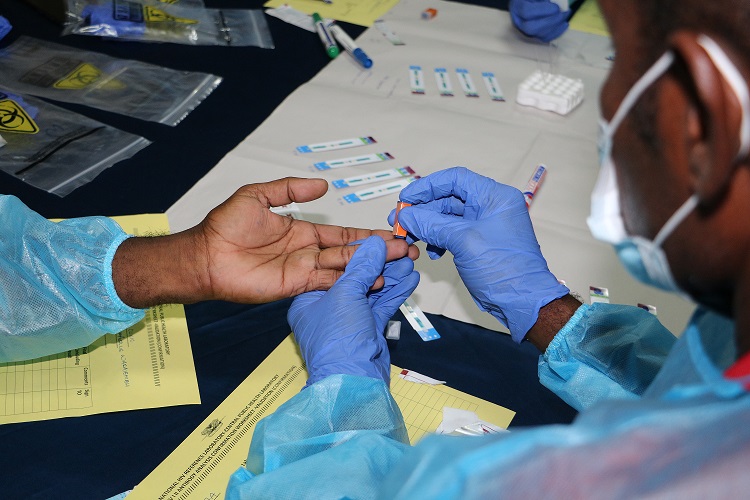 Mary Daniel, the HIV Counselling and Testing Technical Officer with the HIV and STI Surveillance Unit of the National Department of Health (NDoH), says that through the support of the Central Public Health Laboratory (CPHL), the Case Finding Field Workers have received training on how to conduct HIV & STI tests to ascertain a person’s status.

“After we train them, we will launch the community-based Testing program. We will work with them to see if they’re doing the right thing”, she adds.

Mary shares that she was pleased to see the eagerness of participants in learning new knowledge and skills shared by pricking and testing training facilitator Joseph Kivavia.

Joseph is the Officer in Charge (OIC) of the National HIV Reference laboratory at (CPHL) under NDoH.

With almost 40 years’ experience as a lab technician, Joseph says that he conducts trainings for community people linked to HIV testing at the community level.

“This group was taught to do HIV testing in all aspects, from sample collection, sample checking to testing and quality assurance”, he says. Adding that, the Case Finding Field Workers also received training on reporting the results back to clinicians.

Joseph says that this is a very challenging job, especially when HIV is still being contracted, and such an initiative is to enable people in communities to conduct testing for those who are unable to visit clinics due to various reasons such as stigma and discrimination.

“These group did very well, they have been taught about counselling and in the testing component, and they have picked up many things that are often done by professional lab technicians in HIV testing”, he says.

Joseph believes that the training is not a waste and the CFW’s will go back to putting into practice what they have learnt in their target communities with other Key Population members.

“Global Fund and World Vision with other support groups are doing a very good job to support the fight against HIV and I think the support should go on”, he says.

He emphasised that the initiative taken by NGO’s to battle HIV in Papua New Guinea must continue as it creates employment for the Members of the Key Population to reach out and support NDoH in identifying HIV cases in communities though involving the community affected to take the lead in addressing and working to resolve its own issues in regards to HIV/AIDS STI and risky behaviours.

George is the Key Population Capacity Development Specialist under the Global Fund TBHIV program implemented by World Vision in PNG.

“The program works with the Key Population members to reach (KPs) their own peers in terms of HIV/AIDs information for prevention around transmission and also treatment”, he says.

The main focus of the program is to make sure that the Key Population community who are at the higher risk of HIV infection have access to health services which has always been challenging due to stigma and discrimination around issues of sexual behaviour and social norms.

George adds, “The current program is looking at ways to deliver the services down to the community level. To promote access to information, access to testing and access to treatment at the doorstep of the community at risk of HIV infection.”