Bougainvilleans are widely renowned for their ‘homegrown technology’, with a knack for all things mechanical. It’s no surprise that one school principal and his school of 177 students in Wakunai district has constructed an ingenious contraption, which is a modified version of a ‘tippy tap’.

“Autaraiva Primary is a Bougainvillean school. I say this because our 177 students reside in the surrounding cocoa and copra plantation here. Their parents have bought blocs in the plantation. They are from different places in Bougainville, therefore, we do not understand each other’s dialects so we only speak only English or Pidgin in our school”, Mr Sumah said.

“It is a good thing to have a mixture of students, but it can be challenging when we try to work with parents and the community here because there is no common thread that binds, working together has often been hard to do because everyone has their own ideas and beliefs,” Mr Sumai added when asked about the school.

Autaraiva Primary School is a Catholic Agency School and was established in 1991 after the conflict. For the past 3 years, Autaraiva Primary has been working with World Vision and more recently in 2019 became a school in the EU and UNICEF funded Klinpela Komuniti Projek (KKP) under the construction of improved WaSH facilities in schools being implemented by World Vision in Central Bougainville.

“World Vision and Autaraiva Primary have been working together since I arrived 3 years ago. We have had the World Vision Water Sanitation and Hygiene (WaSH) team come and teach us about proper handwashing techniques, and last year we celebrated International Water Day together here in a big event hosted by the school,” recalls Mr, Sumah.

“Together we planned to roll out the WaSH project here in the school and implement some community-based awareness, build tippy taps and construct new toilets, male-female and an incinerator bloc. But because of COVID-19 last year, we had to fast track constructing the tippy taps as it was a directive from the National Department of Education (NDoE)to all schools before re-opening under the ‘new normal’ measures to safeguard and protect our students.” explained Mr Sumah. 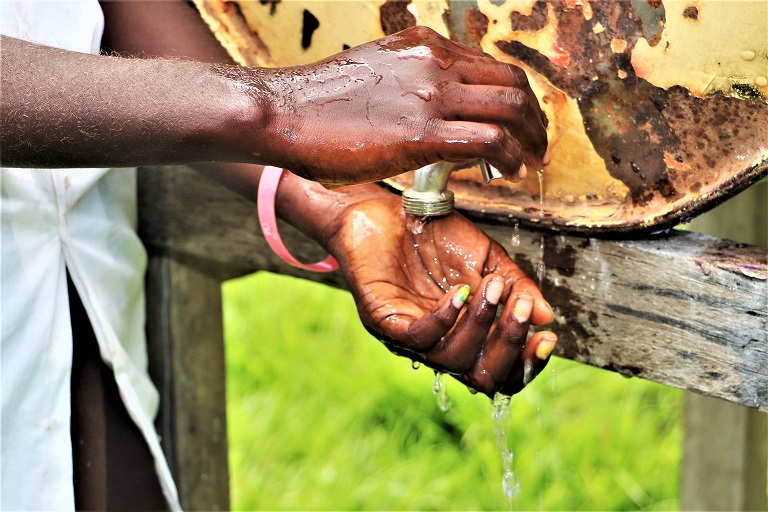 The master-builder in this instance is none other than the principal himself, “it’s more like a tippy tank’ than a tippy tap. Per the NDoE ‘new normal’ directives, we appreciate that World Vision works with so many schools in Bougainville, therefore, as we did not want to delay the recommencement of school after the state of emergency lockdown and deprive the children further, we took it upon ourselves to construct our own tippy taps”, said Mr Sumah.

Mr Sumah then further explained the process of construction the contraption, “It was not too difficult to construct the metal drum tippy taps. We used school funds to buy the two 44 gallon drums. Then I used the concept similar to that of our fuel storage tanks we use in the village, so it’s a modified 44-gallon drum with a similar design to that of a village fuel storage tank. It has a chimney funnel for rainwater catchment but also to refill the drum. I added a tap for running the water. We have the students’ rostered to refill the “tippy tanks” daily to ensure the water does not stagnate therein the drums”.

A thankful Autaraiva School Board Chairman, Cosmos Pakus expressed, “I am very grateful that the World Vision WaSH team had already taught us about proper water, sanitation and hygiene, so when the COVID-19 pandemic hit at first we were all very scared about the implications. But then when we started receiving information about how to protect ourselves, we already knew these preventative measures from our WaSH training and the three-day Intervention Workshop the teachers and myself attended in 2019 run by World Vision.”

Mr Pakus went further to say, “Autaraiva and Koru primary schools are the only 2 schools in Ewara constituency. I am grateful that World Vision through the KKP project has included Autaraiva in its project and will build our students a new toilet block. They also taught us about techniques to protect ourselves and have healthy bodies, so we are not as scared as before about COVID-19 because we know how to protect ourselves.”

According to Principal Sumah, there has been a drastic change in the attitudes of his students and the community as a whole. He attested to a decrease in absences and general sickness afflicting students. He also mentioned a behavioural change and heightened sense of sanitation and hygiene in the general appearance and mannerisms of students and the Autaraiva community.

As a parting word of thanks, Autaraiva Principal Michael Sumah said, “I would like to thank World Vision, the EU and UNICEF for the Klinpela Komuniti Projek (KKP) and including Autaraiva Primary School as a school project recipient. We eagerly await the construction of our WaSH Facility to complement our ‘tippy tanks’ and making our school a more hygienic environment for our students to learn in”.

The EU UNICEF funded Klinpela Komuniti Project being implement in Central Bougainville targets twelve (12) schools in the Wakunai districts in Central Bougainville. Under the KKP school objective, twelve (12) schools recently contracted with a catchment population of around 649 male and 695 female students with a total student population of 1344 will directly benefit from the KKP school WaSH intervention to construct complete WaSH Facility.

The Klinpela Komuniti Projek is co-funded by EU, UNICEF and PNG Government and implemented by World Vision with technical guidance from UNICEF. World Vision is working closely with 3 Districts  (Wakunai, Panguna & Kieta) in Central Bougainville, and the Autonomous Region of Bougainville, Regional WaSH committees, the Provincial Health, Education are Key WaSH partners who play a key role in the sustainability of the project in Central Bougainville Region to accomplish the Central Region WaSH Plan.