“We want to tell the distinguished authorities to pay close attention to everything children say,” said Emily Daniela, boldly in a powerful speech delivered before delegates from around the world at the third UN Conference for Housing and Sustainable Urban Development (Habitat III).

“We don’t want any drugs, violence, or alcohol around anymore. We want a world that is full of love, and no more hate; let’s work together… Remember that this is not just a matter affecting the country’s children, but involves everyone…. We must go build our own city, the city of our dreams.”

Sitting in the audience of the main plenary room for Habitat III, I was awestruck by the confidence of this young girl—only 10 years old—to share the stage with UN leaders and national authorities. As I looked around the full capacity auditorium and saw this young leader from our programme in Ecuador capture the entire audience with her call to action, I was filled with pride and gratitude to be part of an organization that supports vulnerable children and enables them to transform into powerful agents of change for their families, communities, cities and nations.

Today, more than one billion children reside in cities. Hundreds of millions of these children live in slum and informal settlements, vulnerable and exposed to abuse, violence and exploitation. Many lack safe spaces to learn, develop and grow. By 2030, 60 per cent of the urban population is projected to be less than 18 years of age.

Occurring once in every twenty years, the Habitat III Conference was only the third time in history that global leaders and urbanists gathered to discuss the world’s cities. It was attended by over 30,000 people from 167 countries. The Conference launched the ‘New Urban Agenda’ - a global policy document designed to support the implementation of the Sustainable Development Goals (SDGs) in urban areas, specifically SDG #11 “Make cities and human settlements inclusive, safe, resilient and sustainable”.

As a historical first, children’s voices and their calls for action were included in the process. As elected Co-Chair of the Children and Youth Group for Habitat III, World Vision advocated for the inclusion and recognition of children’s rights in the ‘New Urban Agenda’.

Representing World Vision, I was delighted to be invited by the UN to lead the first Children’s Assembly – an official space for children to discuss issues pertinent to their well-being. The event aimed to create awareness of the importance of their inclusion and participation in city planning and budgeting processes.

Over 100 children and adolescents from Ecuador, El Salvador, Colombia, Mexico, Peru, Brazil, India and Indonesia; from local, regional and global child and youth serving agencies gathered together to identify issues, priorities and recommendations for the implementation of the New Urban Agenda. 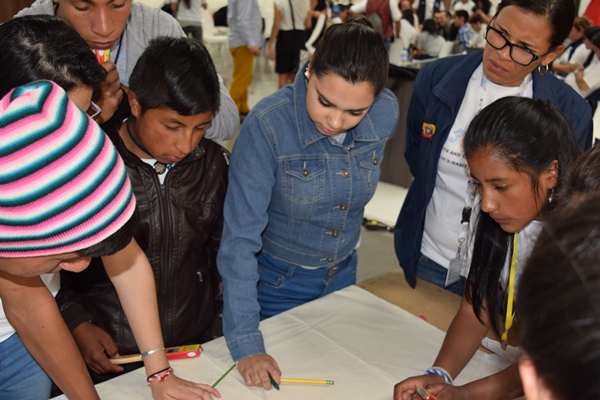 Several activities were organized as part of the Children’s Assembly including: debates, painting, building and mapping, to capture children’s dreams of a city they want to live in. In unison, children demanded access to quality education, safe public spaces and protection from urban violence. Children drew green and walkable spaces, playgrounds and built model cities that are environment friendly and serviced efficiently. They shared their recommendations with the Secretary General for Habitat III, Dr Joan Clos, who created time in his schedule to listen to the future leaders of the city and their recommendations for the implementation of the New Urban Agenda.

As a result of such efforts, the New Urban Agenda now highlights the importance of:

During the Children’s Assembly, the children enthusiastically proposed urban solutions for their city authorities and global leaders to act upon. Children are the idealists - they believe that those elected will build a better world and deliver the future city that they want to live in. Their solutions were captured in a Children’s Charter and was presented to Dr Joan Clos and city government authorities at the closing press conference of the Habitat III Conference.

The calls from these children are in alignment with the priorities outlined in World Vision’s new global strategy, which will be discussed and formally launched by World Vision’s leaders this week. Quality education, protection against violence, safe spaces, access to water and dignified sanitation as well as economic opportunities for families are common issues highlighted in the New Urban Agenda as well as our new global strategy.

To be a 21st century NGO, we (as World Vision) know we need to respond to the growing trend of urbanisation and its negative impacts on the most vulnerable as well as seek opportunities to leverage external knowledge and resources to design inclusive and just cities for children.

With nearly 170 countries adopting the New Urban Agenda, UN member states will be designing new urban national policies and seeking stakeholder engagement to develop these policies. At the municipal level, this will mean local governments will be looking for partners to help them implement the New Urban Agenda. World Vision is present in communities and cities where the New Urban agenda will be implemented. Our local teams understand individual community contexts and issues, and will play a key role in the implementation plan for the New Urban Agenda.

As the post Habitat III plan of action is designed and launched in the coming weeks, as an international child focused agency with strong local presence, we have a lot to offer as a partner, specifically:

-       Stakeholder engagement, collaboration and international cooperation amongst all relevant groups to implement the New Urban Agenda

For the United Nations, the inclusion of children’s voices, ideas and solutions in the Habitat process is a historic first in the development of the New Urban Agenda; however, for World Vision, our investment in participatory urban development began decades ago with research and pilot initiatives launched in the 1980s through World Vison’s Urban Advance Programme, and following, the Urban Programmes Initiative. From 2008 onwards, the Centre of Expertise for Urban Programming has partnered with select National Offices on projects integrating children’s voices into urban governance processes and policy development, including Indonesia’s Child Friendly City Programme, Bolivia’s Citizen Voice and Action Programme, Lebanon’s Youth Peacebuilding Programme and India’s My City Initiative. These projects are engaging children in urban governance processes from neighbourhood to municipal to city level, influencing planning and budget allocations for urban services. I am pleased to share with you our newly launched ‘Making Sense of the City’ Report, which outlines the key lessons and recommendations from the Urban Programmes Initiative.

With several urban innovations occurring across diverse regions and our global positioning and visibility as a thought leader in this key area of work, we are indeed ahead of the game and have a critical role to play bringing children’s voices, concerns and solutions for equitable and inclusive cities. As the children and adolescents aptly put in the Children’s Charter, “If you build the spaces that we need to continue expressing our voices, be sure that trusting in our capacities, and who we are, we will be the builders of inclusive and smart cities that are a better for all.”