The world knew it was coming. The warning signs were there long before an alert was issued in January 2017: an ever-widening gap between humanitarian need and available funding; the largest number of forcibly displaced people since World War II; an increase in the number and severity of protracted conflicts; and greater numbers of vulnerable people hit by an increasing frequency, severity and intensity of climate-change-related disasters. The 2011 famine in Somalia left 260,000 dead, half of whom were young children. Conflict and blatant violations of international humanitarian law, blocked access to highly vulnerable populations and delayed humanitarian funding all were exacerbated by drought. This shameful and deadly outcome led a collective cry of ‘never again’.

Yet, here we are again, this time at a scale not seen in recent memory. Twenty million people across four countries – South Sudan, Somalia, Yemen and Nigeria – are on the brink of famine, with large numbers of people already highly food insecure in Syria, Malawi and Zimbabwe at heightened risk. All told, at the beginning of 2017, the number of people requiring life-saving food assistance was 108 million, a 35 per cent increase from 2015.

To ensure no one is left behind World Vision recommends: 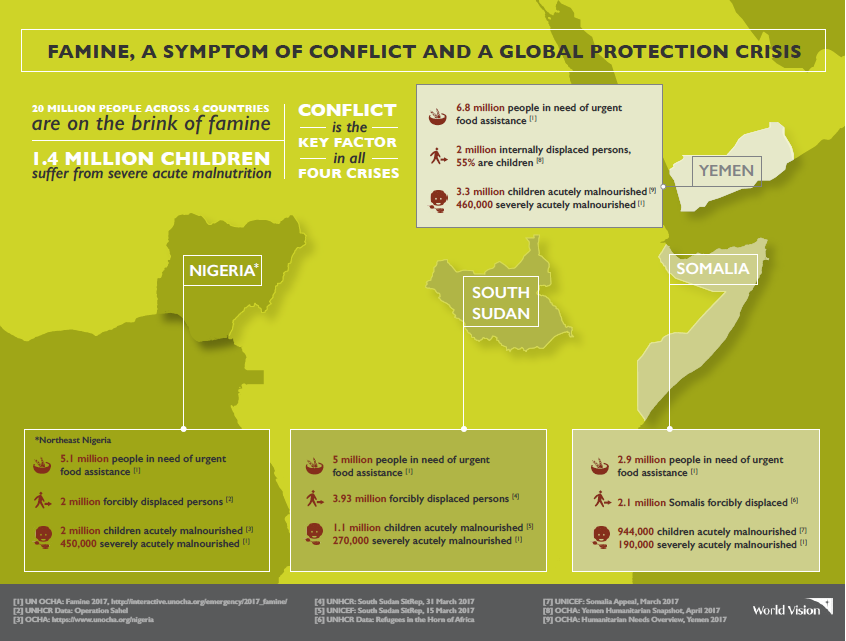