“I really like participating in the activities organized by World Vision. It occupies my time and prevents me from thinking too much. I like school a lot too. But, with the constant seismic tremors, I am very afraid of the walls in my school. I am more comfortable when I am in the Child-Friendly Spaces,” says young Preslene, from Petit Trou des Nippes

Preslene is a 16-year-old teenager, the youngest of Philoria's 10 children. She lives with her mother in Carrefour "Tisè", in French "Little Sister", a locality located not far from the Child-friendly Space (CFS) of Sainte-Thérèse installed by World Vision after the earthquake of August 2021 to provide playful and psychosocial support to children. Preslene is always focused on school because she dreams of becoming a well-known nurse but also because she believes that school protects her from juvenile delinquency.

Preslene felt unwell and stressed after the earthquake fatally shook her area and caused extensive damage. She felt all the more stressed following the incessant tremors in January. This phenomenon is not without consequence on the functioning of the school.

"I got to know World Vision a few days after the disaster through Mecene, a young volunteer assigned to my area," explains Preslene. "[She] came to my house one day and had invited several of us to participate in an activity at the CFS. It was very fun. Since then, I am always present. It is actually my 3rd favorite place after school and Church. I learn a lot there. We learn how to protect ourselves against diseases, how to wash our hands well, among other things. In this space, we eat, we play all kinds of positive games. On November 19, I took part in a peaceful march to demand our rights from the authorities. I had held the banner and I was really proud of myself, explains Preslene. 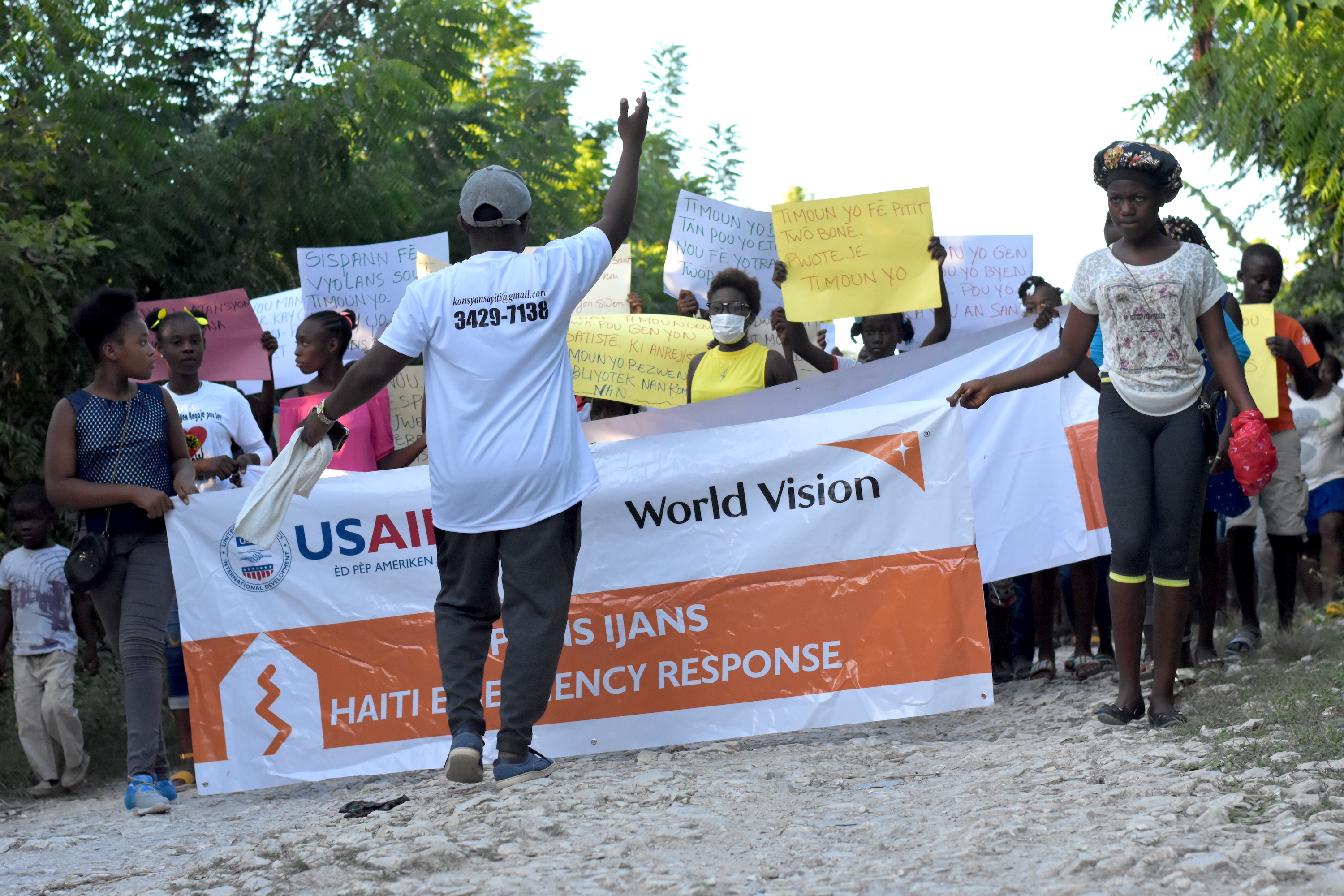 Participation in the activities of the Sainte-Therese's CFS was not long in having its positive impact on Preslene by helping her to overcome the stress and the feeling of withdrawal which greatly undermined her morale. What she so needed. But she had never seen herself so taken into consideration before. World Vision stood with her and acted like she was the only one this organization cared about. Hence her feeling that World Vision is not only an organization but for her it is also a friend who lends her a hand in difficult times. 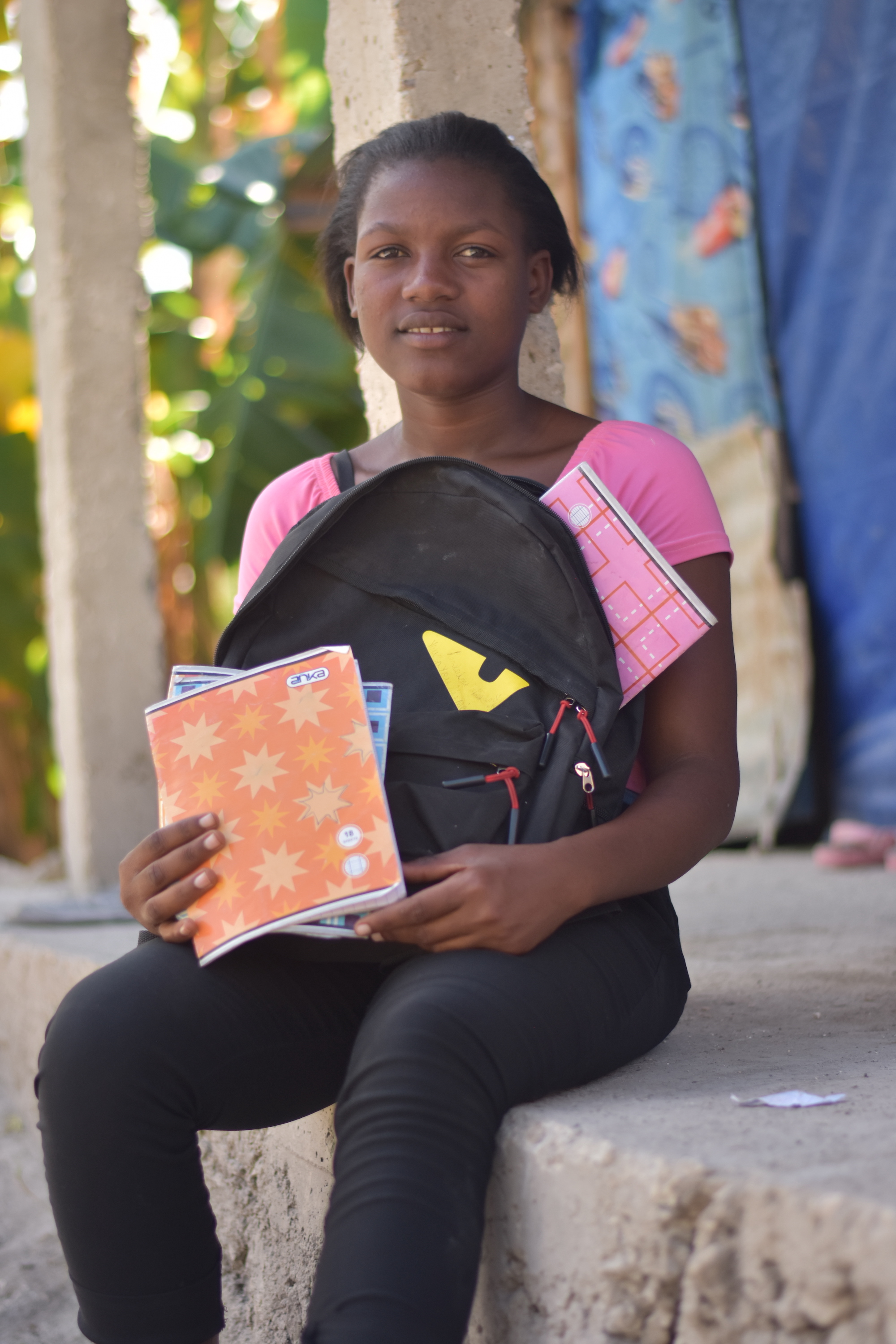 World Vision further supported Preslene and the children affected by the earthquake by distributing school kits in 29 schools to 3,278 students.

“I didn't have enough notebooks, pencils, pens or a geometric box. Now I have plenty of them. And, I really like the backpack that World Vision brought me. I am very grateful for all of these things,” says Preslene with a smile.

World Vision also took the opportunity, with the support of the teachers, to deworm 39,482 pupils during the months following the earthquake to end their abdominal pain caused by worms and to help them concentrate better at school. Worms often disturb the student's ability to pay attention, concentrate and memorize. It is also a common cause of school absenteeism.

“Since I took the albendazole that World Vision brought us at school, I no longer feel any abdominal pain with the same frequency as before, admits Preslene. I love the work that World Vision does. It did a lot of good for me and for other children in the community,” congratulates Preslene with great satisfaction.