It’s 7:30 a.m. in Agra, the city in northern India home to the Taj Mahal, and the first wave of tourists walked through the monument’s entrance gates an hour ago at sunrise. About a mile away, in a neighborhood called Shambu Nagar, 9-year-old Preeti Sholanki is finishing her breakfast.

A medley of smells — flatbread studded with onions cooking over open fires, sewage sitting in the drainage canals that line the pathways — envelops the neighborhood as Preeti’s sisters help her get ready for school.

Her family is more than her parents and siblings; there are four households containing dozens of aunts, uncles, and cousins. All are descendants of Preeti’s great-great-grandparents who migrated to Agra from Dhoda, Rajasthan, about 150 years ago when drought and famine swept across western India.

As her ancestors packed their things to leave their homeland in the 1800s, they couldn’t have envisioned Preeti, generations later, packing her schoolbooks into a backpack. They left Rajasthan to survive. But today Preeti, her basic needs met, leaves home each morning in pursuit of much more. 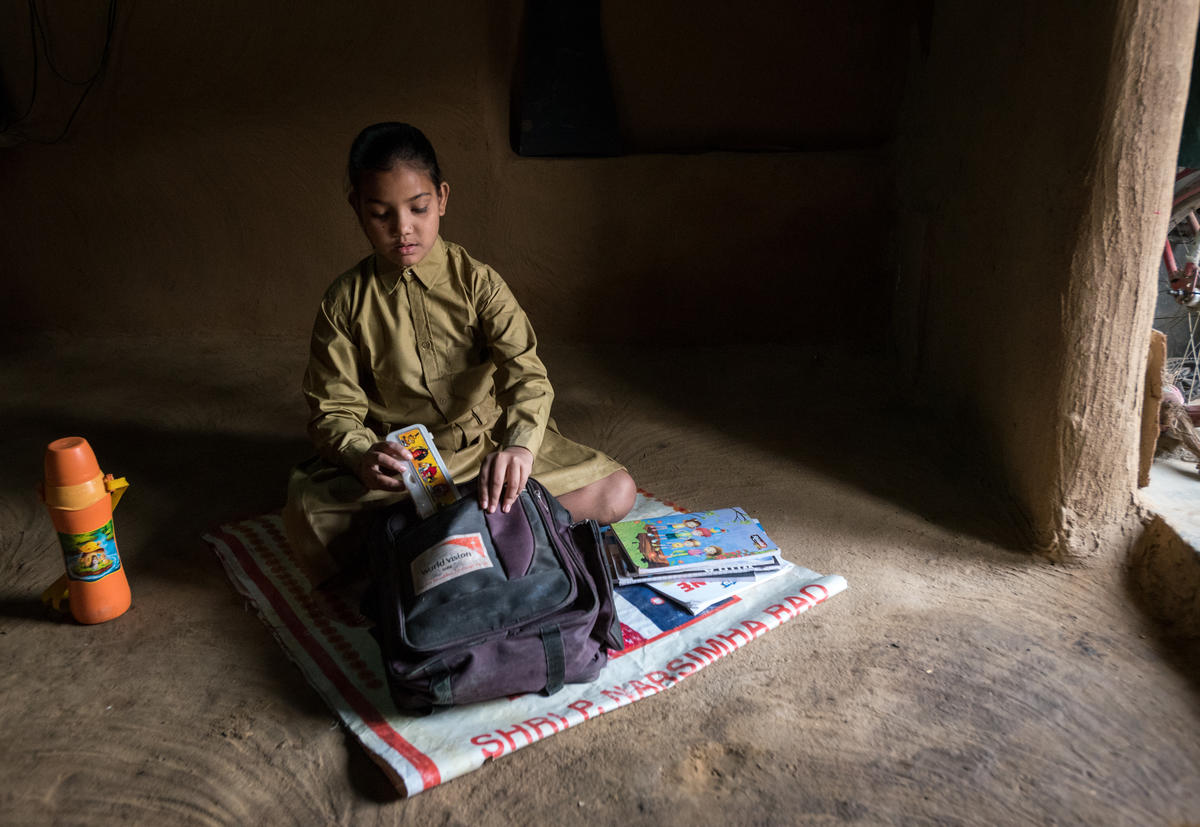 After carefully pulling her hair into a ponytail and putting on her backpack, she joins her friends Kiran and Roti to walk to school. It’s about a 20-minute walk — first across a dirt field strewn with trash, then through a maze of streets — until the trio in tidy matching uniforms reaches the shady square where their government-run school sits.

“Education is providing a way to improve life,” says her father, Om Sholanki, 40. And for his family, there is room for improvement.

Om attended school through fifth grade. Like many families in Shambu Nagar, he earns a living by making and selling “hunters” — Indiana Jones-style leather whips — to tourists outside the Taj Mahal. Each one costs about 400 rupees (US$6.10) in materials and takes Om and his wife, Kaushul, six hours to make, and Om sells them for whatever price he can get. Sometimes it’s as little as 100 rupees (US$1.50); on a good day, he sells 10 whips and covers the cost of materials.

Handling leather made from cows, believed to be sacred in this majority Hindu society, makes the family outcasts — and keeps them in poverty’s grip.

“Every day you dig a well, you drink,” he says, speaking of the daily struggle to provide for his family. He says that each time he interacts with a tourist, he’s reminded how education can take his children to a different level in life.

He didn’t always believe this to be the case. It was the combined effort of his sister, Leela, and World Vision volunteers that convinced Om of the importance of education.

Leela, 32, is one of two people in this neighborhood of about 800 who completed high school. She doesn’t work making whips like the rest of the family. Instead, she helps run the local anganwadi, teaching basic education to children who aren’t in school, as well as leading nutrition and health classes for pregnant and lactating mothers.

“Most of the younger generation is illiterate, and they can be taken advantage of,” says Leela. “I thought, 'How will change come in my community if I’m not investing in them?'”

She knows the opportunities available to those who complete their education, and she wants that for the young people in Shambu Nagar. In five years of working at the anganwadi, Leela has helped enroll 44 children in formal school, including Preeti.

Leela says, “I might not live to see the change that will happen in the community” as a result of her efforts, but she’s already seen the change in her niece’s life.

“I want to be like my aunt,” says Preeti. The third-grader is off to a good start. Her favorite subjects at school are Hindi, math, and English, and she enjoys studying.

“I will study more than my aunt,” says Preeti with a shy smile. “School life is a better life.” 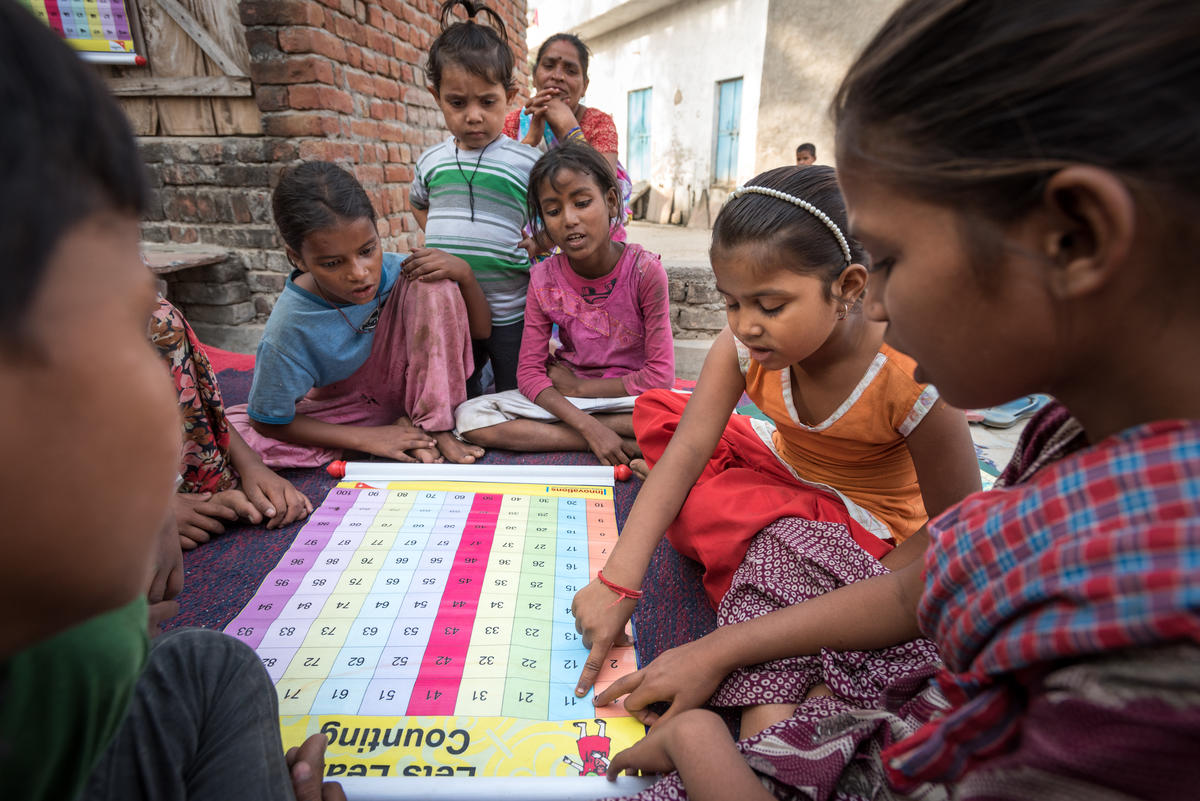 Taking advantage of every opportunity, Preeti goes to a World Vision-run remedial education center for an hour after school. About 30 children play educational games and complete math and language exercises — all designed to reinforce what they learn at school and fill the gaps of what isn’t taught. They also have some fun, laughing through games of hopscotch and hide and seek.

Back at Preeti’s house, her older sisters, Kiran, 18, and Pushpa, 16, aren’t in school. They dropped out several years ago when many of their classmates did the same, and now they spend their days helping Kaushal around the home. But since Om and Kaushal have come to value education and the opportunities that come along with it, Om has hired a tutor for Kiran and Pushpa to get back up to speed and re-enroll in school.

The tutor’s fee — 250 rupees (US$3.87) per month — stretches the family’s finances. Money is a constant worry and challenge.

He wants more for his children than just survival, and his support of their education counts as a different kind of investment. 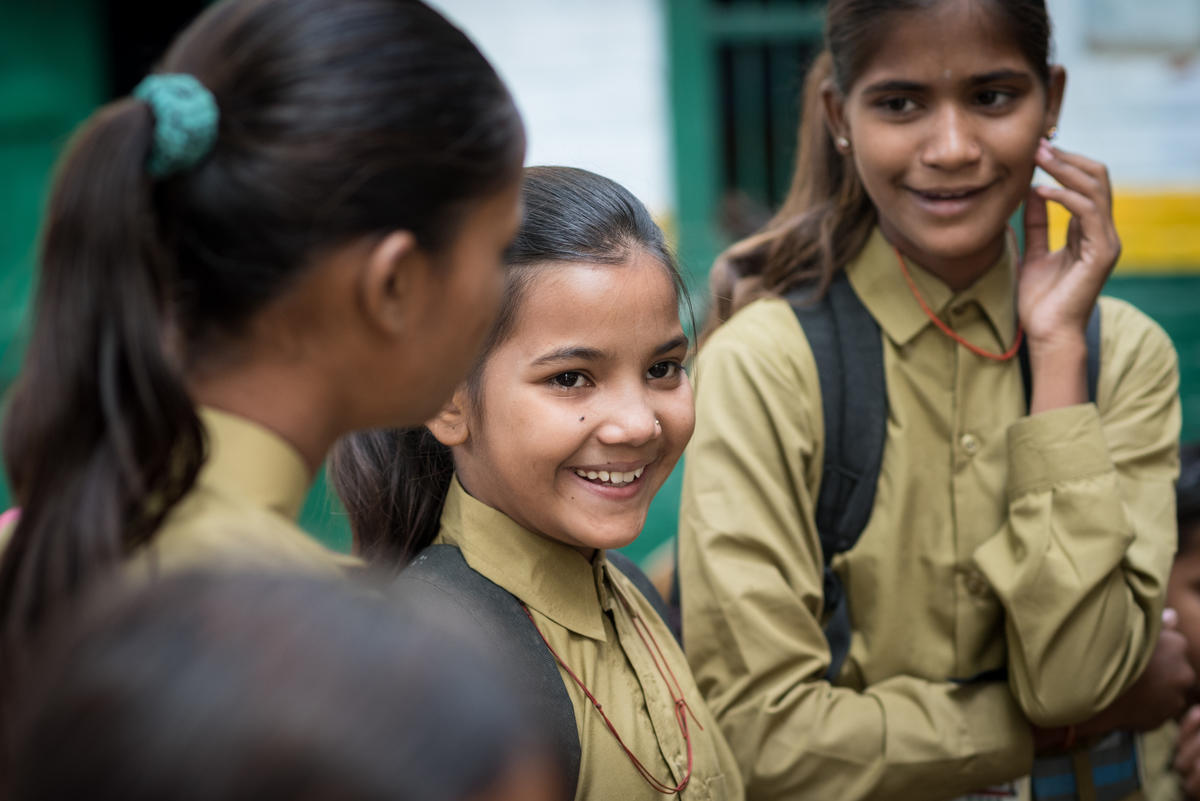 “Every parent wants a good home for their kids and an education. My desire is that they study. Our life is gone but we want a good life for our kids,” he says, echoing the attitude across centuries that spurred his great-grandparents to move to Agra.

Part of a good life in their culture entails his daughters making a good marriage, and poor families are more likely to marry off their daughters at a young age. But in this family, two factors lower Preeti’s risk of child marriage. Her parents didn’t marry as young teenagers — Kaushal was 18 when she married Om, who was 20 — and Preeti is in school with the full support of her parents.

With marriage far from her mind, she dreams about helping others and becoming a teacher, like her aunt.

“Once I grow up, I want to improve my community,” Preeti says.

For now, she’s like any other 9-year-old after school: dancing around her house with cousins and sisters, wondering what’s for dinner (she hopes it’s dal makhani, her favorite dish), and doing homework. After all, she has nine years until high school graduation.