On an average day in a remote Senegalese village, a teenage boy packs his bag and heads to school. Sounds simple enough. Not for this footballloving, ever-smiling, sweet-spirited teen who for the first 9 years of his life, was completely blind and as a result, thought he was cursed.Meet Boubacar. 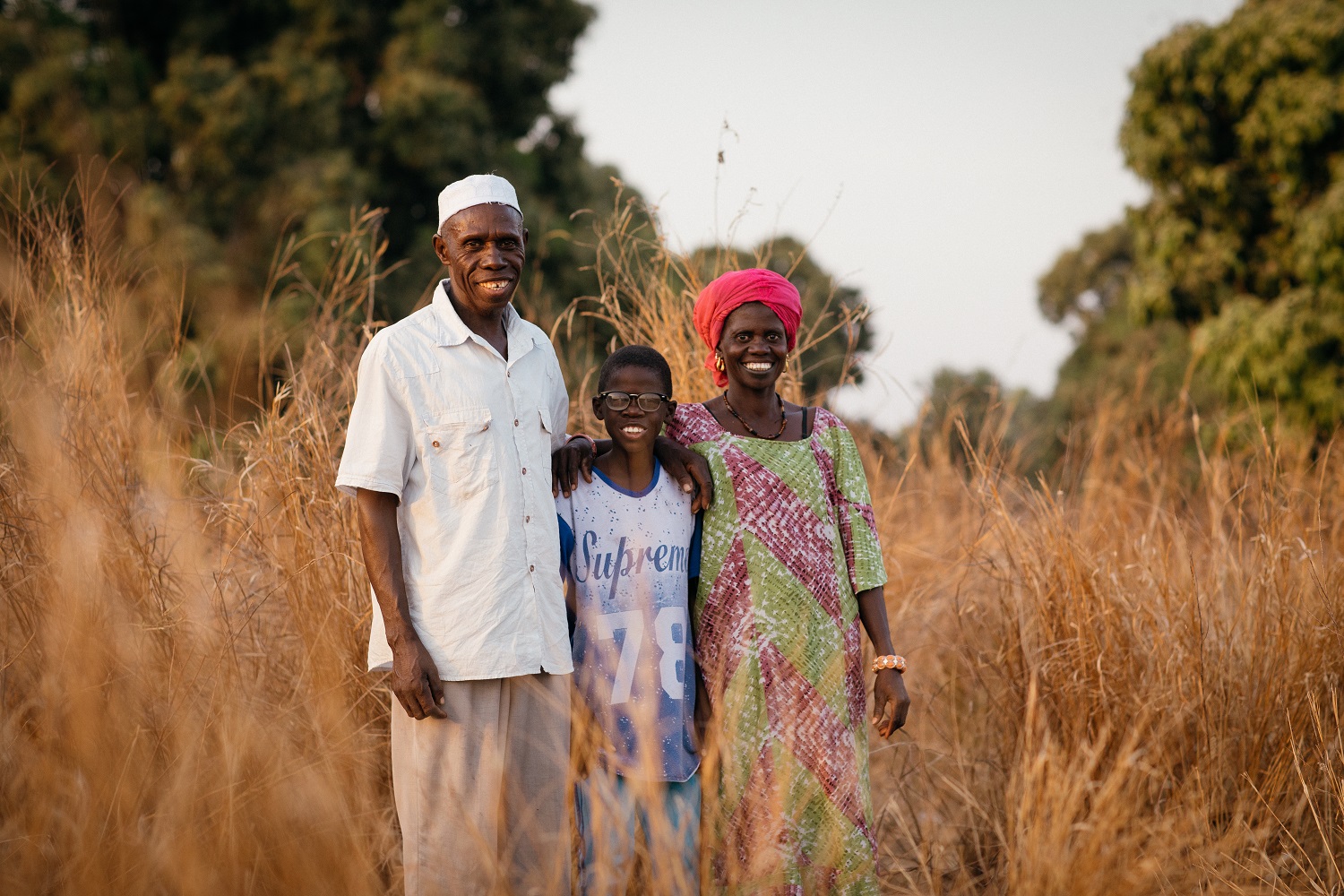 Boubacar with his parents Fatoumata and Kelu. As the sun set on an ordinary Tuesday afternoon some 14 years ago, a heavily pregnant woman called Fatoumata stopped in the bush and gave birth to a son, alone. She was surrounded by rubbish and animal faeces, yet she says her heart was “full of joy”.Once he was born, she wrapped him in her clothes and made her way home under the cloak of darkness. Even if Fatoumata had been at home when labour arrived, she would have given birth on the dusty floors of her straw and mud hut home; and without a clean pair of scissors to cut the umbilical cord because in her village, at that time, there was no clinic, nurse or doctor to help. 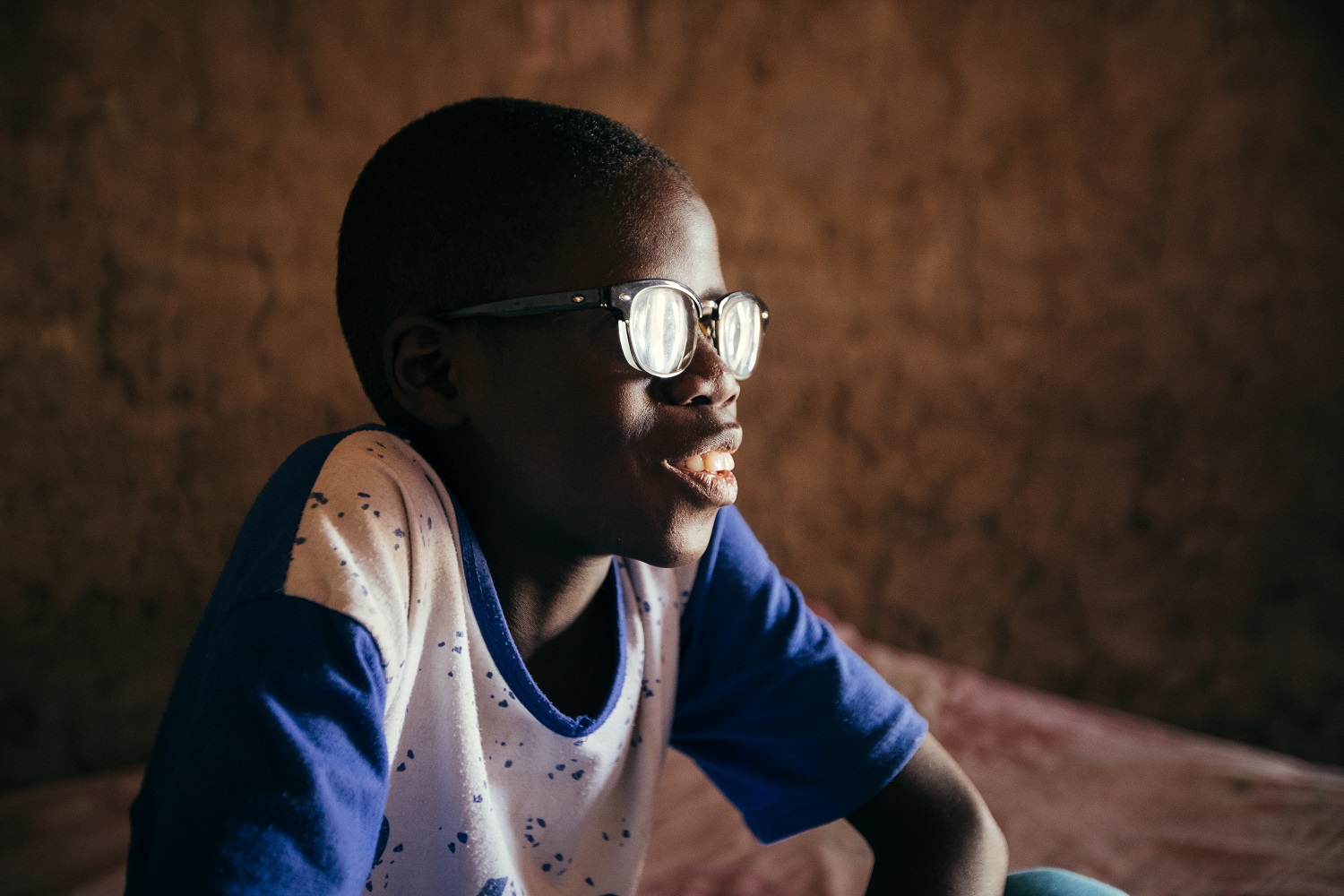 “When he started walking, he couldn’t see anything in front of him. I compared him to the other children and… this was the moment I knew he had a problem with his eyes,” says Fatoumata, 40. “We prayed to God because we didn’t have any means to deal with it. In the family, everyone was sad about him. I was worried, I used to think about his future life.”It took multiple visits with doctors to agree that Boubacar had a chance of correction; that he may one day open his eyes and see the world in all its colour and beauty. The problem? He had severe cataracts which was mostly likely a result of malnutrition, poor sanitation or malnutrition of his mother when he was in uteri. The World Health Organisation estimates that 90 per cent of the world’s people suffering from serious visual impairments live in developing countries with the major cause due to malnutrition or trachoma. Before the operation, he said: “If I can ever see the light of day, I too will go to school, to discover the wonder of what children like me like to do...and see every day.” 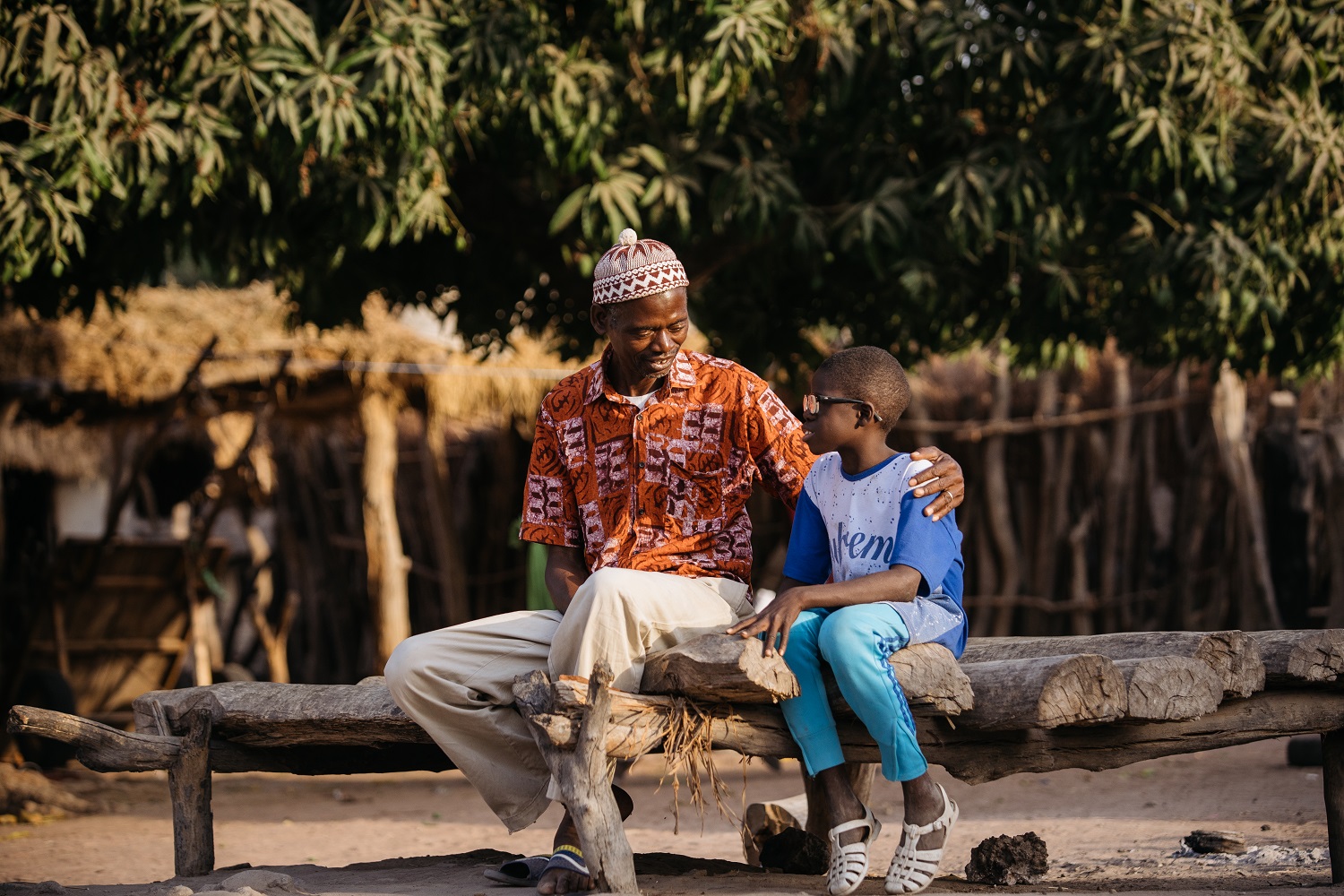 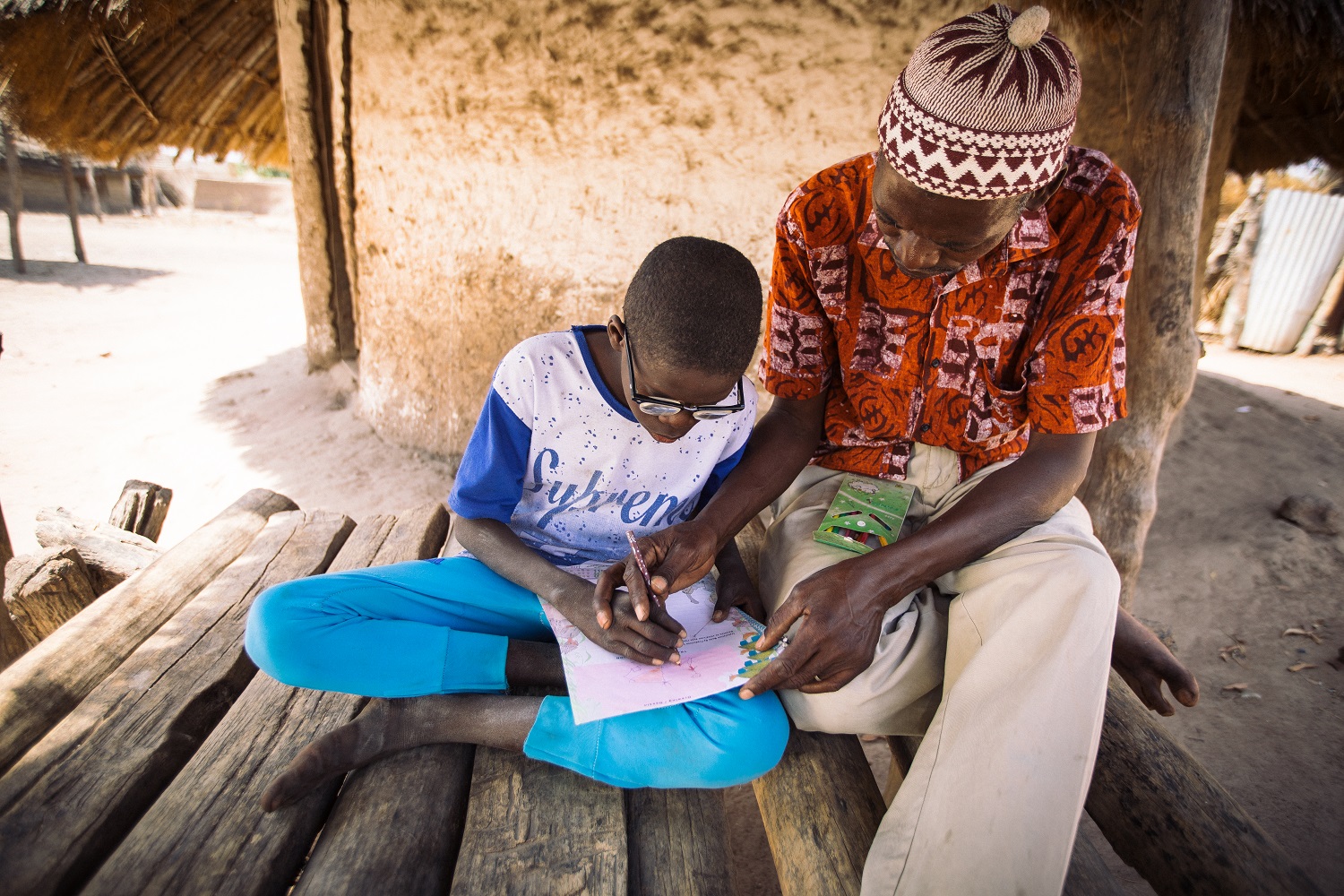 With Tamba Niabaly, World Vision’s community development facilitator. “He had all the problems in the world imaginable,” says Tamba Niabaly, the community development facilitator in Boubacar’s village, who was appointed by the village chief as the bridge between the community and World Vision at the start of the partnership. “That day [he was operated on]… the tears fell. He said ‘truly, I am seeing” and I said, ‘what can you see?’ He said, ‘I can see the trees’. I asked him what I was wearing and he said, ‘you are wearing a blue boubou’. I was. I was really so overwhelmed… Because we saved a child that was almost lost.” His father Kelu adds: “That day is the most memorable of my life. His eyes were finally open.” Boubacar is one of 91 sponsored children in a remote Senegalese village, mostly comprising of a minority people. Since the community partnership with World Vision, malnutrition in all children has dropped from 39 per cent to 0.2 per cent, the number of all children suffering from diarrhea has dropped from 28 per cent to 2.7 per cent and education attendance in all children has jumped from 65 per cent to 100 per cent. There’s a school, a health clinic, a mill, a women’s savings group, a children’s reading club and so much more. A number of highly vulnerable children like Boubacar have received individual care, including some who suffered foot paralysis and are now able to walk. But life before was very different, the community was isolated, without any safe drinking water and there was an entire absence of health facilities. 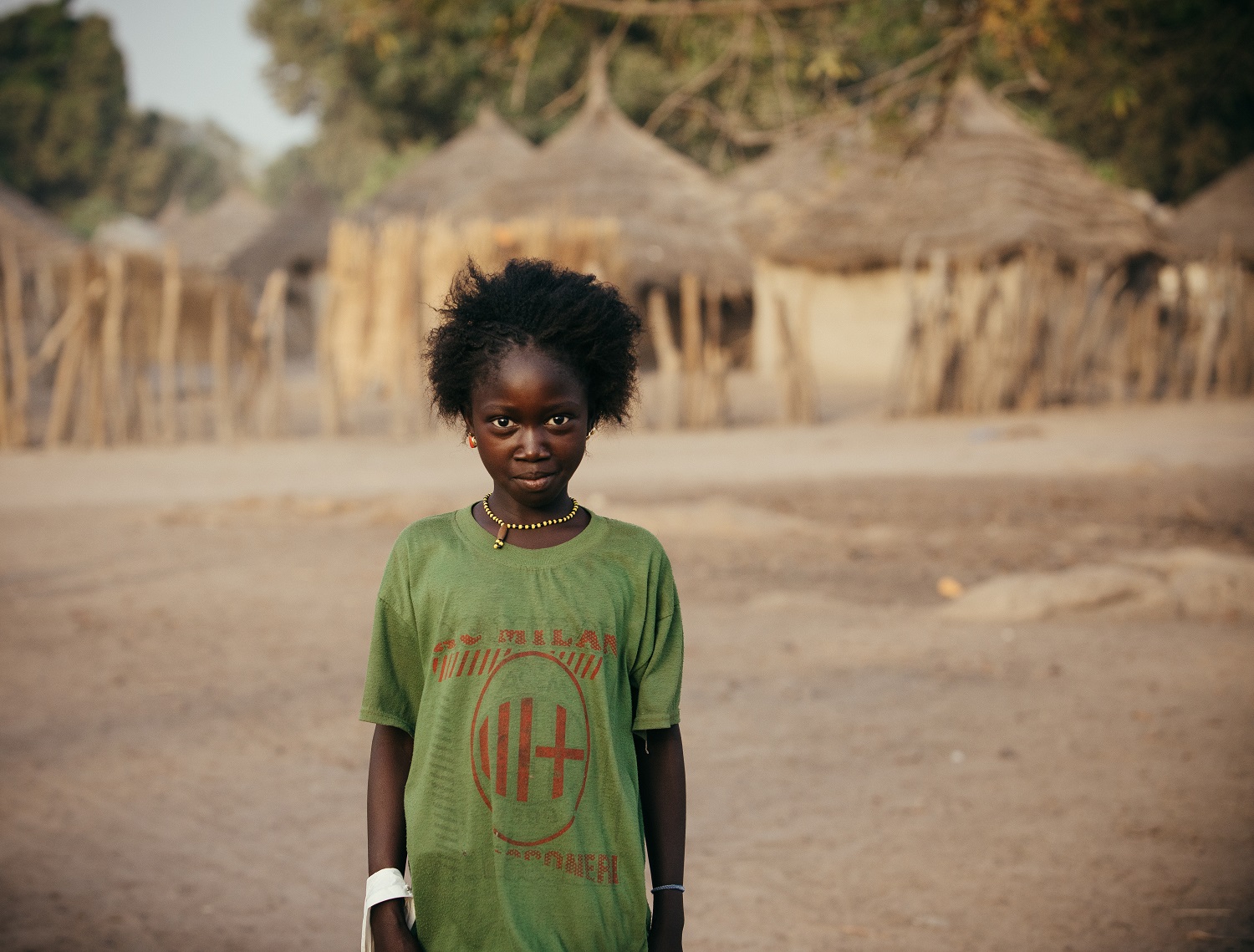 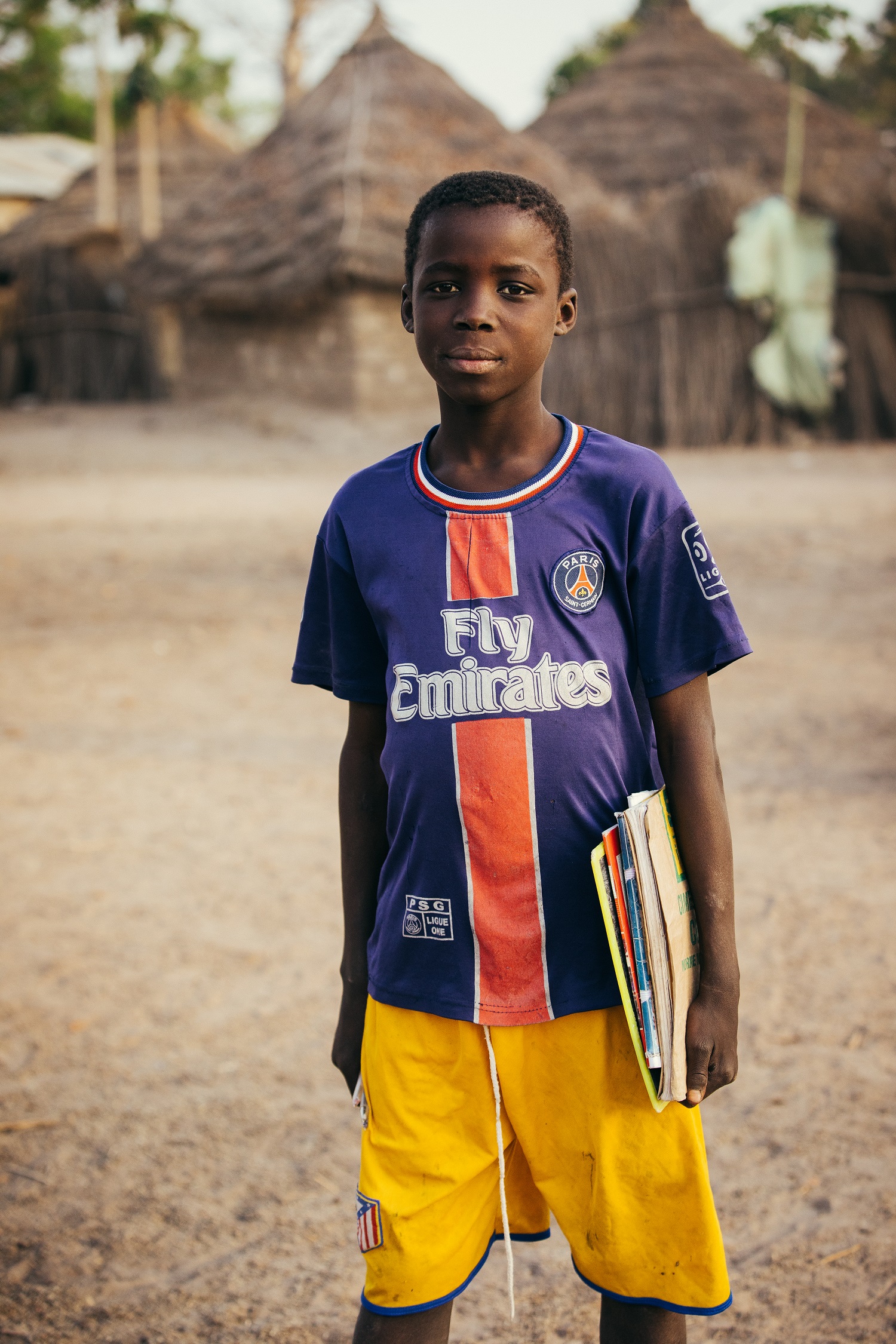 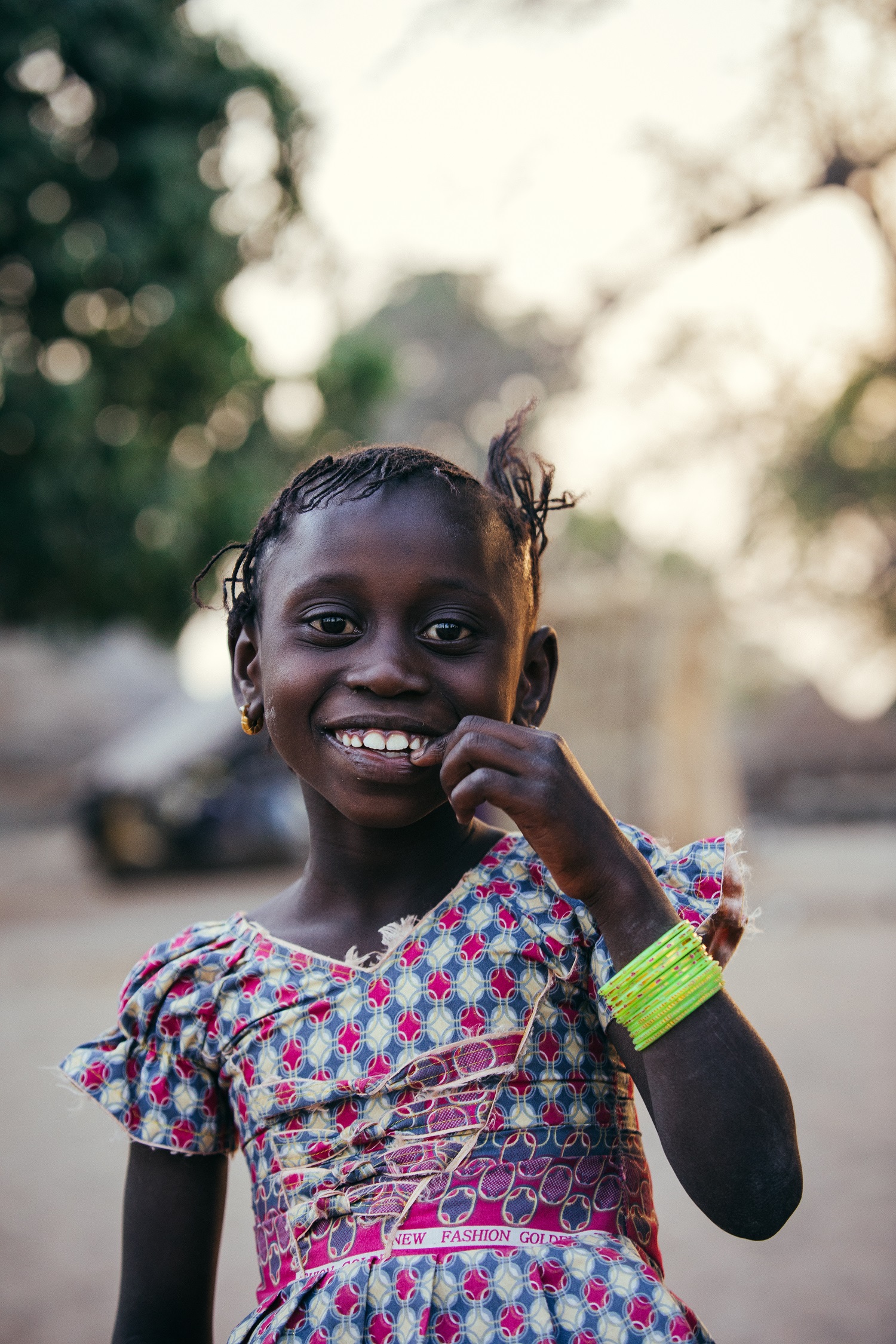 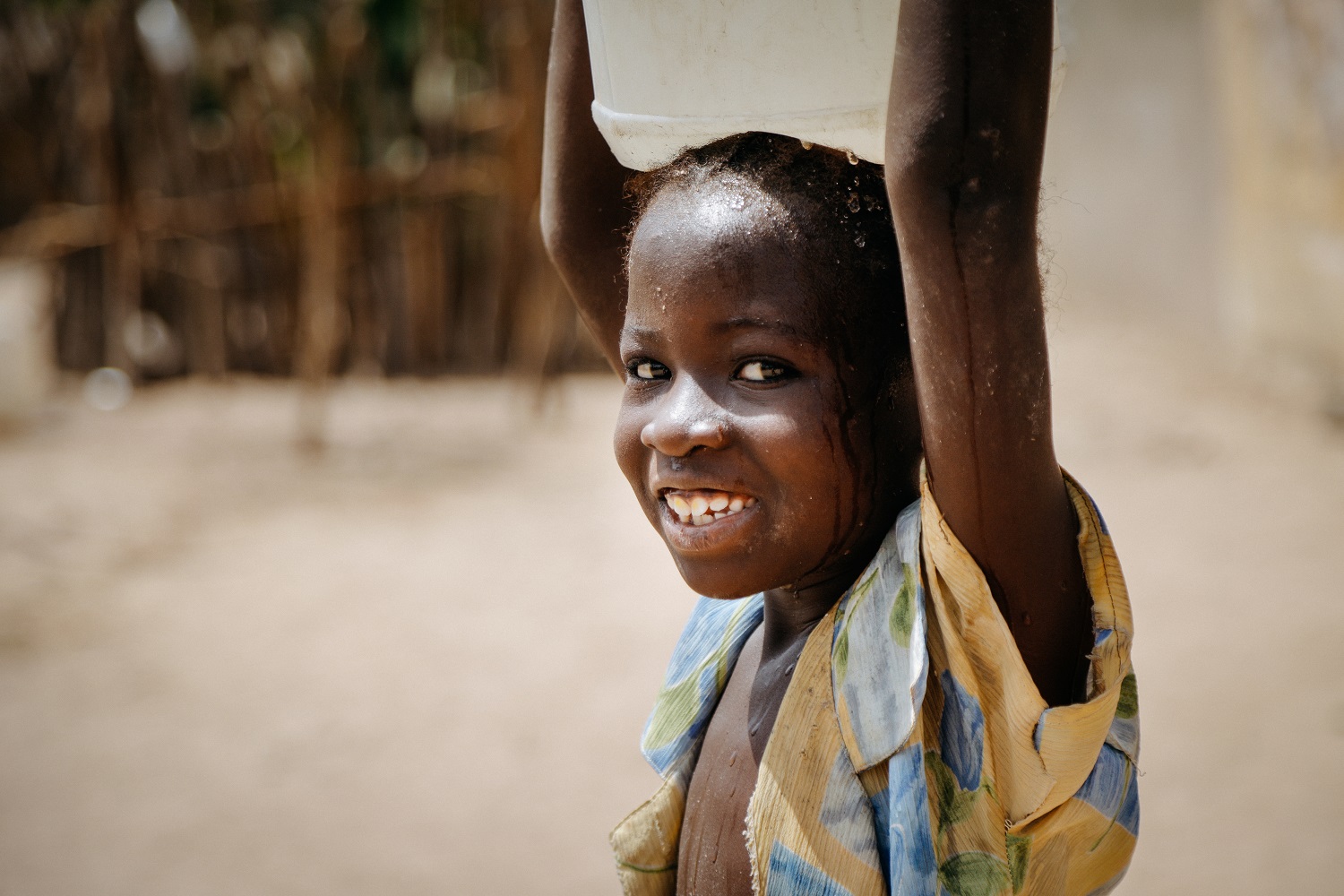 “We only have to walk around this community to see that there are now a lot of children, which we did not see when we came here first, [when] the programme started,” says Crepin Louhoungrou, World Vision’s Regional Program Manager.“When I see the many children on their way to school, the families, most of all the women who are busy around the mill that really helped lighten their workload, when I see their energy and dynamism as part of our savings groups for example and I hear the testimonies that I hear, it not only warms my heart but it shows also how much sponsors, who are the partners of the children, the government who are also our partners and ourselves, World Vision, are being of huge use to this community,” says Crepin. 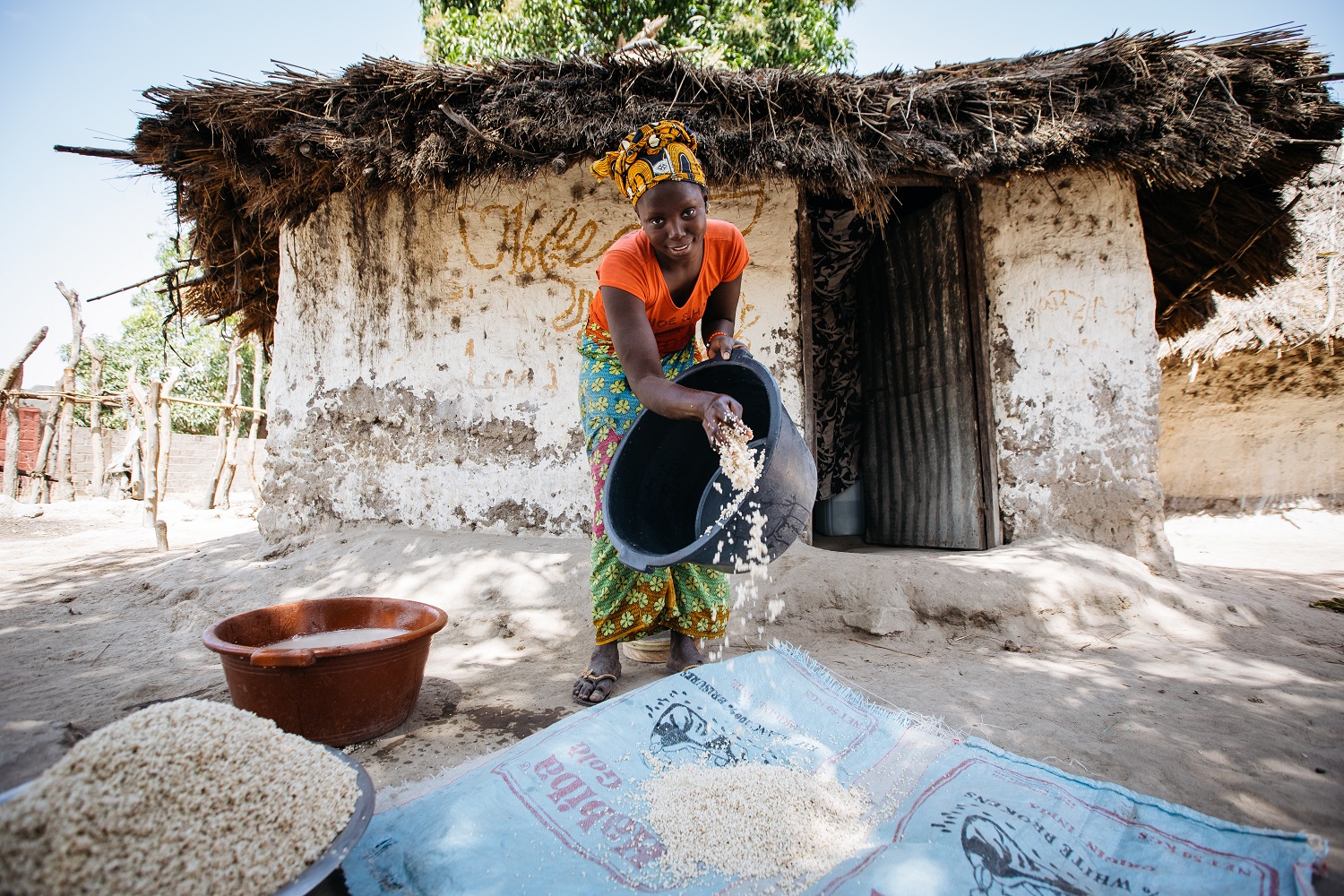 “When we see the way in which Boubacar’s life has been transformed, which was made possible by his sponsor, and by the [Child] Sponsorship programme… I can remind us that the entire community benefits from the many achievements. Child Sponsorship is a real door-opener for us to achieve many incredible wonders to create a better life for children,” adds Crepin of World Vision’s unique approach – to support children in the community and to simultaneously tackle the specific root causes of poverty faced there so all children benefit. “Our heart is for the children and we are here to demonstrate God’s love for them in this community,” says World Vision Senegal’s National Operations Director Diegane Ndiaye. “It is our faith in action. For a child like Boubacar, thinking about his sponsor living miles and miles away from him yet supporting him so he can restore his hope and so he can have a dream, that is all about love, because it’s not something you see every day.” 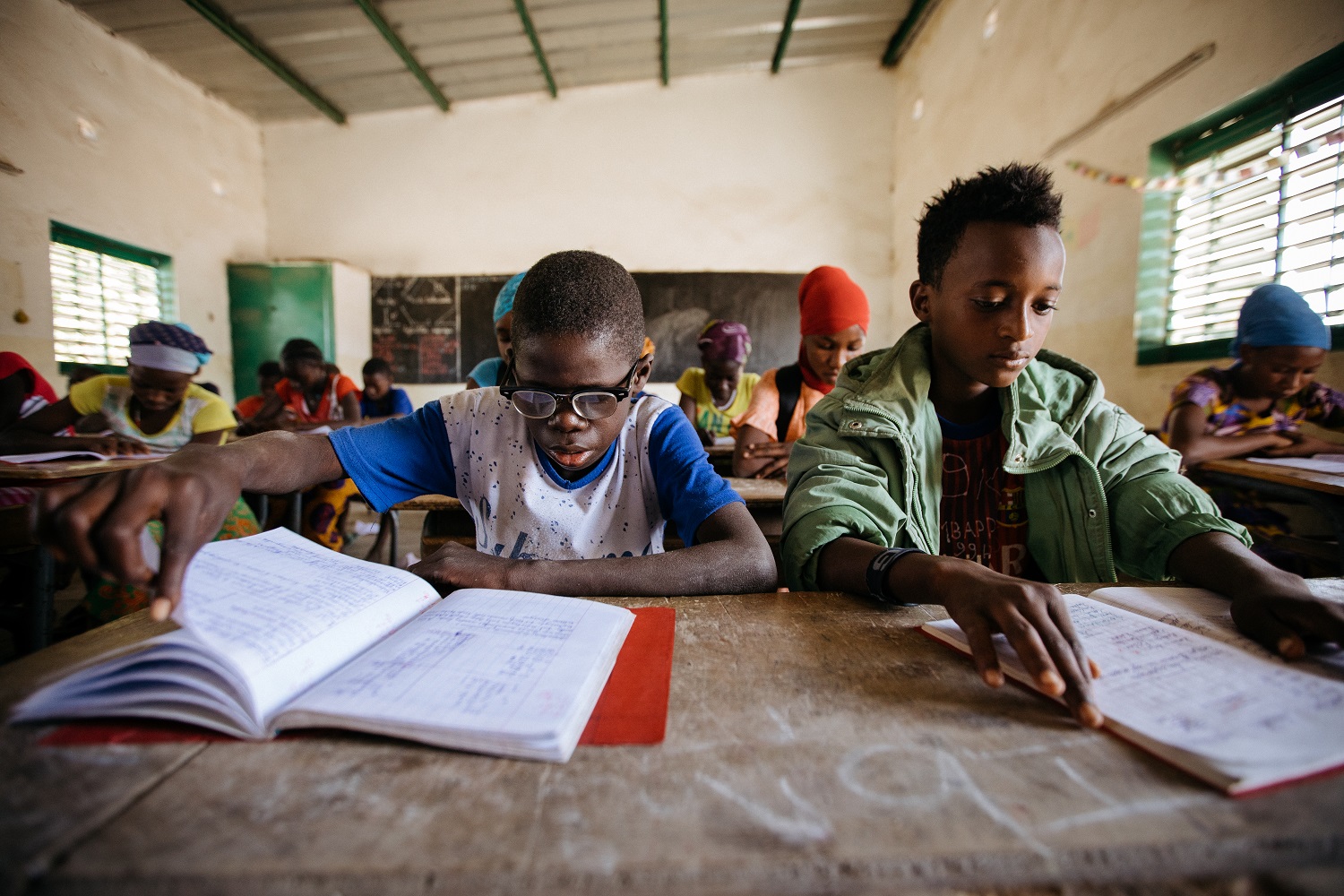 As she finds shades from the hot midday sun, Fatoumata grabs her husband Kelu’s hand and thanks God for Boubacar and for his sponsor Glen, of Canada. “Today there is progress,” she says. “There is good water. We have a clinic to help us. In terms of school, we have teachers. Right now,” she says pointing up the dusty track, “Boubacar is at school. The words lack me in gratitude. When I think about all the good things that have happened here I am grateful, I stay hopeful, because children are in school and tomorrow, might succeed in life.” As for her precious son, she adds: “Today he has a fulfilling life and it is a great burden that is taken away from us. We can dare to hope and believe in the future that is ahead of him.” 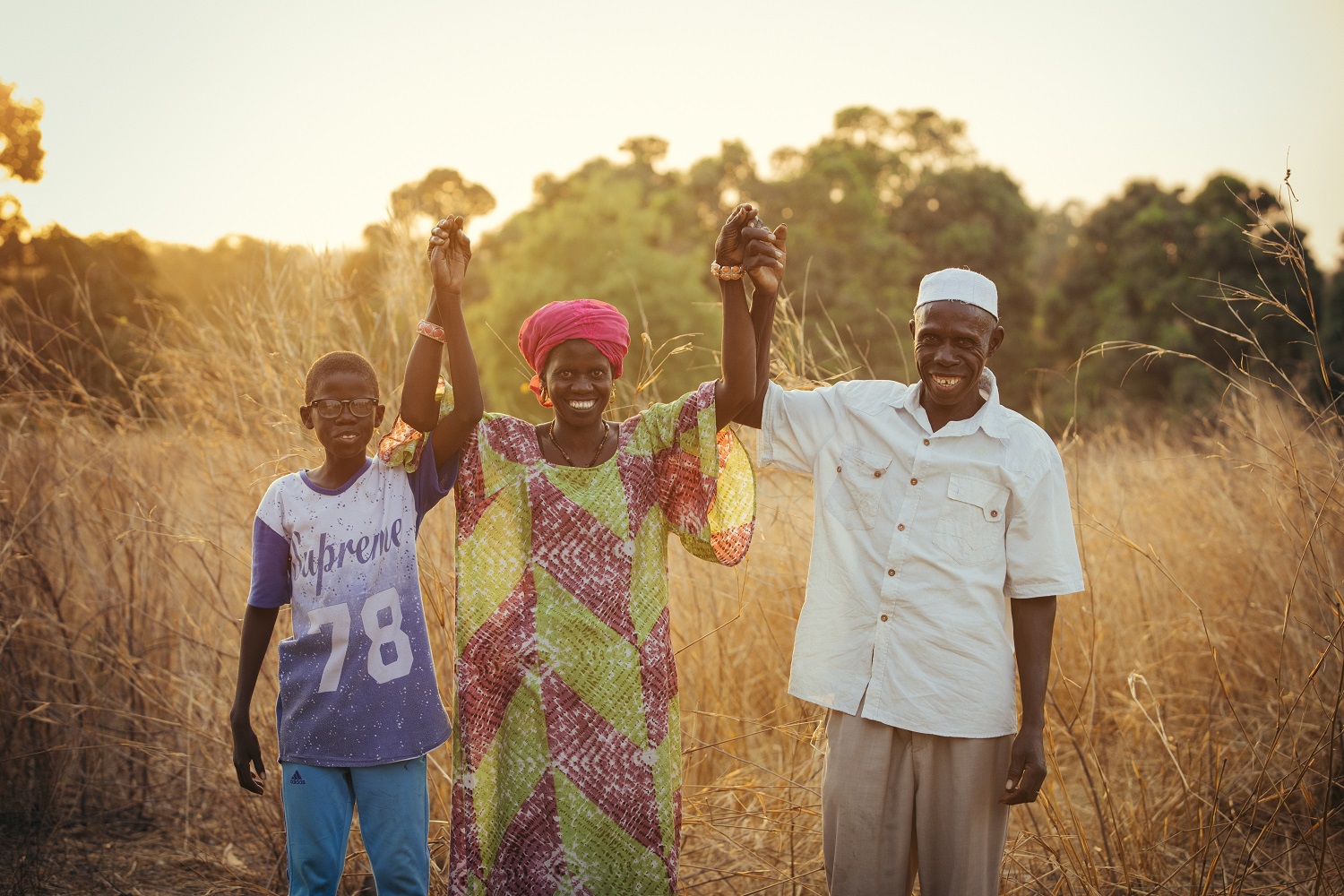