“It is my intention to launch, in consultation with stakeholders, a universal health coverage system and period of serious reflection on health governance.”

This is how the President of Senegal his Excellency Macky Sall signaled his determination to address the difficulties that ordinary people suffer in accessing health care, in his speech to the nation on April 3, 2012.

The Senegalese Ministry of Health has enjoyed a long-standing strategic partnership with USAID, which is supporting the Government’s moves by means of the HSS+ (Health System Strengthening Plus) grant. Abt Associates have been allocated overall coordination responsibilities and World Vision has been tasked with implementing the Community Commitment component. This is a critical role, through which the end-delivery of health care at grassroots level is actually accomplished, in alliance with the community Mutual Health Organizations (MHOs).

The experience of Gnilane D. offers an example of how this works out on the ground.

A resident of the district capital Niakhar, Gnilane D. is married to Mr. C. and is the mother of three children, including twins, Ibrahima and Aissatou. Gnilane described how her second pregnancy with her son Samba had ended in a problematic delivery.

“My second delivery was difficult but I was fortunate to have the support of the Niakhar MHO. My husband’s circumstances are not the best, as he works in the informal sector where it is a challenge to meet the family’s needs and ensure good health for all.

I am a beneficiary of the mutual health insurance scheme, thanks to the involvement of a neighbor who is a teacher at the school. Seeing my situation, he one day very kindly had me join the Niakhar MHO so that I could have a safe pregnancy and a straight-forward labor”.

Gnilane is just one of the 1,412 new recruits to the ranks of the MHOs since the launch of the program, which has facilitated scores of meetings, workshops and outreach activities, trained hundreds of personnel in Universal Health Care provision, and communicated the advantages of MHO membership to over 16,000 local people.

Gnilane takes up her story again. “As a member I was able to complete all four of the standard pre-natal consultations at Niakhar Health Center. But on my delivery date I had complications. I was taken to the health center at 6am, but more than twelve hours later I was still in labor. At that point the midwife decided to transfer me by ambulance to Fatick hospital for a Caesarean section. Equipped with my health card, the MHO membership card and a letter of guarantee, I was admitted straight into theater. Without these documents, my condition would certainly have worsened.

After the delivery I was kept in hospital for eight days, and the mutual met the cost of all my prescriptions to the tune of 48,000 CFA, which came as a great relief to my husband. And I’m not the only one who benefits from being in the mutual. The twins (4 years, 7 months) and my youngest (1 year, 5 months) will also enjoy free health care until the age of five.” 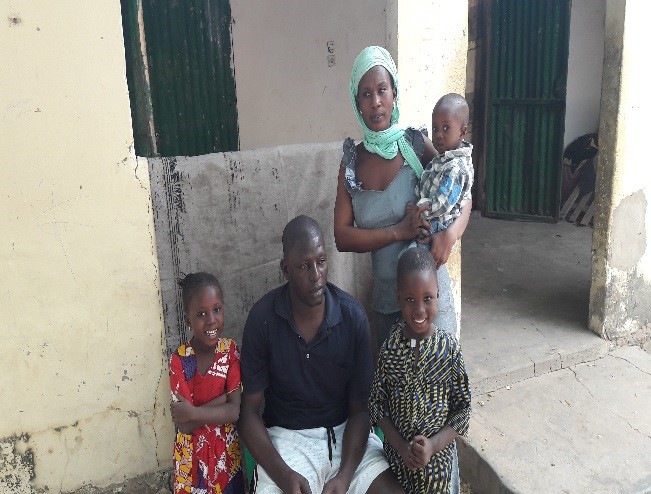 Gnilane, standing next to her husband and children.

Gnilane concluded by underlining how mutual health insurance provides a system of solidarity that restores the dignity of the most vulnerable, and ensures fair access to care without discrimination. It guarantees that women of reproductive age will have the chance of a safe pregnancy.

"A community that is involved in promoting community health will overcome the scourge of maternal and infant mortality".