The goal of the World Vision campaign is to create an environment that supports child well-being in order to secure a better future for. The themes addressed during this campaign are child marriage, child labor, child abuse and children in emergency situations. The campaign will last five years and will be implemented in all areas of development programs of the organization.

Safia Aminami, an artist engaged as ambassador for the campaign

Safia Aminami has been designated to be the ambassador of the campaign. In her commitment to the child protection cause, the artist has already released a special song for the campaign in which she speaks against violence against children. Over the next five years, she is committed to carry out numerous awareness campaigns combining strong messages with songs and dances. 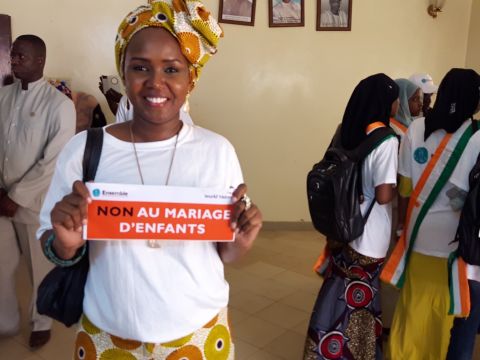 This launch comes after community dialogues have taken place in the World Vision Niger catchment areas. The Mediator of the Republic, Me Ali Sirfi Maiga, launched these dialogues in the regions of Tillaberi, Maradi, Tahoua and Zinder. The main conversations focused on child marriage.

"The partnership with World Vision allowed me to go to the most remote places in Niger and listen to the stories of heart-broken women and girls, broken because of the shocking events that they have had to go through. These have to stop. I heard that nine-year-old girls were forced to marry for financial reasons. This is unacceptable! The time has come to take action by banning these harmful practices which come with dreadful consequences. I am personally committed to this fight, "said the Mediator.

A day dedicated to Nigerien youth

After the official launch, the Youth Parliament of Niger went to the National Assembly to deliver the "policy brief". The President urged the young parliamentarians to seize this opportunity to undertake actions for the well-being of children, especially the most vulnerable in rural areas. He also recognized that the campaign is an excellent initiative, which will certainly help to improve and protect more lives. "It's a constitutional right for children to be protected. It is also a duty for the State to ensure that children’s rights are reinforced, "said the Speaker of the National Assembly.

See how the "It takes a World to End Violence Against Children" campaign fits into our larger goal of ensuring all children are protected and participating in their development.