“The idea of ​​putting myself at the service of the children's well-being really caught my imagination, but I had no idea what was in store. The work was tricky at first, but with the help of the various training exercises that World Vision provided, I soon came to enjoy how it was going and I could see my performance improving by the day. I gained a lot of confidence from the positive feedback on my work that I received from the World Vision staff,” says Tamba, a young person with a real heart for the well-being of the children in his village.

Tamba Gnabaly is a Community Development Facilitator (FDC) in the area of Linkéring, specifically in the village of Tonguia. He takes care of supervising the children enrolled on the World Vision Senegal sponsorship programme.

Until 2000 Tamba lived in Dakar with his family and was employed at the Terrou-Bi hotel, one of the most prestigious in Senegal. His income enabled him to provide a relatively comfortable lifestyle for his family and he envied no-one. His work was a source of motivation and a good reason for staying away from his village, despite feeling the distance. "I was not rich, but I managed to look after my family, in other words my son and my wife, and keep the wolf from the door. My father and mother back in the village were full of praise for me because I would regularly send them money to meet their different needs. It encouraged me to stay in Dakar to continue helping my parents".

Tamba may have been far from his village, but he was not totally out of touch with the realities of home. He was also aware that members of his community were enduring very different circumstances to his own. The idea of wanting to give something back to his home community was stirring in him, but with his lack of means all he could do was leave it in the hands of God. This went on for ten years, until the day came that he received a delegation of four people bearing him an important message from his village chief. The message he listened to struck him like a distress call from his community. However, such was the urgency of the message and the size of the sacrifice asked of him that he was cast into deep confusion. "I did not know what to decide or do. I knew deep down that I had not only the duty to honour my village chief who had shown trust in me, but also to be of assistance to my community. But just when I was on the point of making a decision, I thought of everything I would have to leave behind. I was so torn between the two."

But after a few days of private turmoil, Tamba finally resolved to forsake his life in Dakar in order to help rescue his community. His wife, his true life-partner, had complete trust in him. So it was that they made the reverse journey of exodus back to their homeland.

Arriving in his native village of Tonguia, Tamba immediately realised the extent of the poverty gripping his community, and he was struck by the ultimate need to do something. "As soon as I got to Tonguia I could see that there was no drinking water, nowhere to purchase medical supplies and no school. The women's work was back-breaking, and the children were severely afflicted by malaria, malnutrition and diarrhea. All this painted a very gloomy picture of community life there.” In this atmosphere, Tamba whole-heartedly accepted his village chief’s offer. This consisted of taking up the post of Community Development Facilitator for World Vision's child sponsorship project. And ever since taking it on, Tamba has never ceased to thank World Vision for the way that the sponsorship programme has transformed his community. But his real satisfaction in all of this lies in his various contacts with children, and the satisfaction it brings to improve their well-being: "What I like the most about my job is when I go to visit a child sponsored in the programme. It gives me the chance to say to the children what the weight of tradition prevents their parents from being able to say. I take advantage of these moments to impress upon the children the importance of going to school, and the evils of early marriage, lack of hygiene and even female genital mutilation. I don't deny that it was hard to bring up the subject at the beginning, but the various training sessions I received from World Vision filled in the gaps in my knowledge. Now when I talk about it, I am able to make a persuasive case and the children listen to me attentively. Not only that, but they go so far as to reject the parents' proposals to force girls into early marriage.” 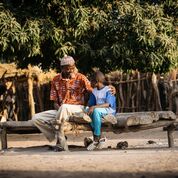 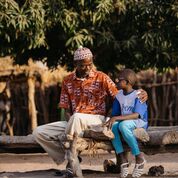 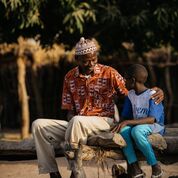 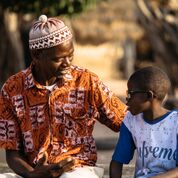 In view of the changes that have occurred in his village thanks to World Vision, Tamba is left with no feelings of regret at having returned to his kin. Otherwise, he would be suffering seeing his community in poverty. But today, he feels very proud to have been one of the actors in these changes: "I have no qualms about returning to my village, because, it's fair to say that it's been down to me that life has changed visibly in my village, especially for the children." Just recently, the kids from Tonguia Kids Club impressed me deeply with their actions. On their own initiative they managed to dissuade a family from giving their daughter in marriage. This girl is now delighted to be able to continue her studies. For me personally, the children's intervention was the reward for all our hard work. I also remember that the vast majority of children in my village did not have birth certificates, because birth registration was almost non-existent. But today there is not a single child here in Tonguia who has not been issued with his or her birth certificate. All families have finally acquired the practice of declaring the births of their children. I am very grateful to World Vision for helping us educate our parents about this phenomenon.”

Faced with all these seemingly unobtainable changes that have now become a reality, Tamba can't help himself from planning for the future. He dreams of a Tonguia where his fellow citizens who have gone to other lands will come back and come together to carry out major agricultural projects in order to put in place basic socio-economic infrastructure, create employment for young people and totally put the community beyond the reach of hardship. 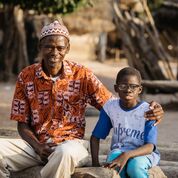 He believes strongly in the development of his village. For him, there is enough to do in the villages. "I call on all young people, both in their home villages and elsewhere, to abandon all thoughts of illegal immigration. Because there is abundant potential in our villages for leading a decent life.

I really want to thank the teams from World Vision for the road we have travelled together. I can give a long list of changes thanks to their efforts. I personally think that if World Vision had not been there with its approach, we would not have had these advances. I do not pretend that there are no more problems in our village, far from it. But our future generations carry great hope because World Vision has really sown the seeds of development among us. Thanks be to God and to World Vision”.